Our cultural institutions love launching programs and the season for it is upon us. With invites from every cultural outfit known to Don Dunstan flooding our inbox, we take stock not just of each program, but also of the launches themselves. 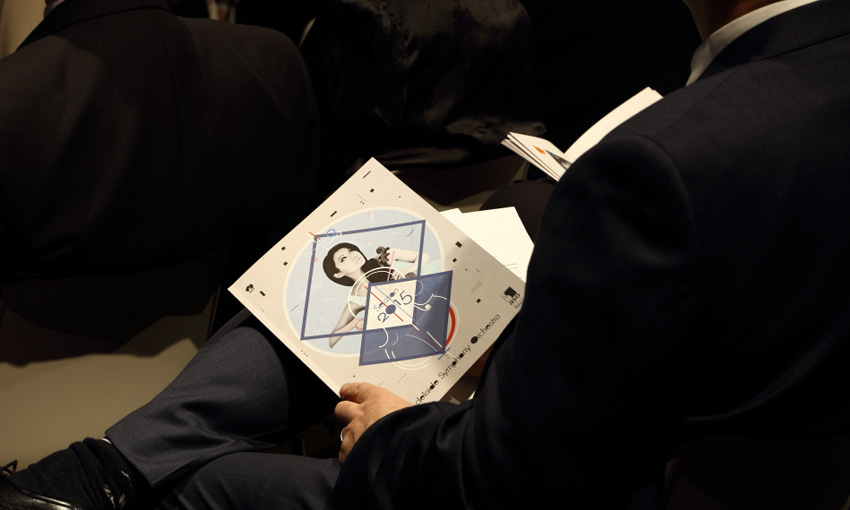 How you launch a program will set the tone for how it’s received. This week, CityMag – along with many other media, subscribers and supporters – was hosted by Feast Festival and the Adelaide Symphony Orchestra (ASO).

Arriving at dusk on a Tuesday evening, the setting sun is a nice touch we think: Tick.  The diamond shaped windows of SAHMRI glint gold as CityMag strides past the only slightly incongruous presence of a large Lexus SUV with ASO markings parked out front.

Inside, we’re greeted with a warm smile and professional skepticism.

Our venue this evening: SAHMRI

“Here for the ASO launch?”

Thankfully a nod gets us through to the inner sanctum. Big points here for avoiding the unnecessary and awkward process of checking names against a printed (or worse – iPad) list. NOTE: A program launch is not a house party, Corey Delaney’s not coming and the most a few gate crashers will set you back is a wedge of cheddar.

Full marks for banter in the opening remarks. Cringeworthy compliments between the ASO and chief sponsor SANTOS were somehow entirely avoided. It seems as though the cultural institution and ASX 100 company have a firm understanding and genuine appreciation of one another. The fact that they’ve been in partnership for some 16 years makes for a more genuinely celebratory mood too, so: Tick.

Speeches were a fly-through with all dues being paid along the way. As firm believers in the value of design we were heartened by the special mention given to Showpony – the creators of the ASO’s new-look program for 2015.

The A4 shaped booklet is a sturdy 40 pages of matte paper, and from the feel of the stock, likely to have come from the KW Doggett family: Tick. Showpony have brought a pretty sincere sense of playfulness to the ASO brand with their design of the program and its purposefully un-refined colour palette. Instead of stoic black and white images of important musicians CityMag is entirely unaware of, it is digitally augmented portraits (of musicians CityMag is almost entirely unaware of). Confetti shapes are strewn about every page and the whole thing effectively disrupts our perceptions of the ASO brand. All of a sudden “Our Symphony” is having fun: Tick.

And it’s all part of the plan. The program is full of new content for the next generation of Symphony goers.

And while CityMag will be stumping up for a glimpse at the stunning Sarah Chang we will definitely be sharing some knock-offs with Guy Noble at the Town Hall for his innovative Classics Unwrapped program too. It’s great to see an important cultural institution gamble on the viability of mid-week performances. It’s a good bet though. The 6:30 timeslot and relative brevity of the performance mean we’ll enjoy a nice bit of culture followed by a nice bite to eat at Press* afterwards: Tick.

The business end of the evening

Finally, the food and beverage offer. While platters were too often bereft of crackers, the mix of small goods and cheese were eventually wrangled with fingers. In fact, the lack of crackers led to impromptu bouts of empathetic conversation and introductions to fellow guests as we lamented our inability to ferry food from platter to palette without the aid of a round wafer vessel: Tick.

Oh and drinks – there were many glasses filled with plenty of bubbles: Tick. Tick.

The program launch for this year’s Feast Festival was tasteful, inclusive and rippling with positive energy. It was exactly what CityMag hoped for at the unveiling of the line-up for a festival that celebrates diversity and community.

A program launch has the tendency to grind to a tumbleweed inducing halt when it comes time for the speeches. The arts administration posse aren’t always the most adept at rocking a mic and the long, dreary task of thanking each and every sponsor can leave most attendees suddenly fascinated with their own shoes. Tuesday night, however, was a refreshing change. The usually tokenistic acknowledgement of the land’s traditional owners was replaced by Auntie Katrina personally welcoming the crowd to Kaurna country in two languages. It was unifying and warm and to quote the lady herself, “Black fellas don’t have gods but we believe in the power of love”. Overall one got the sense that Feast Festival is very grateful for its continued existence and has a genuine relationship with its sponsors and the community.

Before we round out let’s get down to brass tacks. The food. The nibbles. Tonight’s event was held in the function room in the rear of Marcellina’s Pizza on Hindley Street so you know there were some swollen-with-flavour margheritas flying about. On the other end of the culinary scale guests were greeted with plates of out-the-box spring rolls and sauce. Not that such an unpretentious crowd cared. Everyone was there for the announcement of art rather than the catering.

Not the highlight of the launch.

Finally, the organisers made the creative most of a limited budget with a projected video showing off the array of shows on offer accompanied by, without a hint of irony, The Village People’s YMCA. As a straight white man, your correspondent is hesitant to mention that he laughed out loud. Truth is that I smiled and that’s the point of Feast. If I left that much cheerier after the program launch then I look forward to what the actual shows will do for me. Also, YMCA really is just a great song.