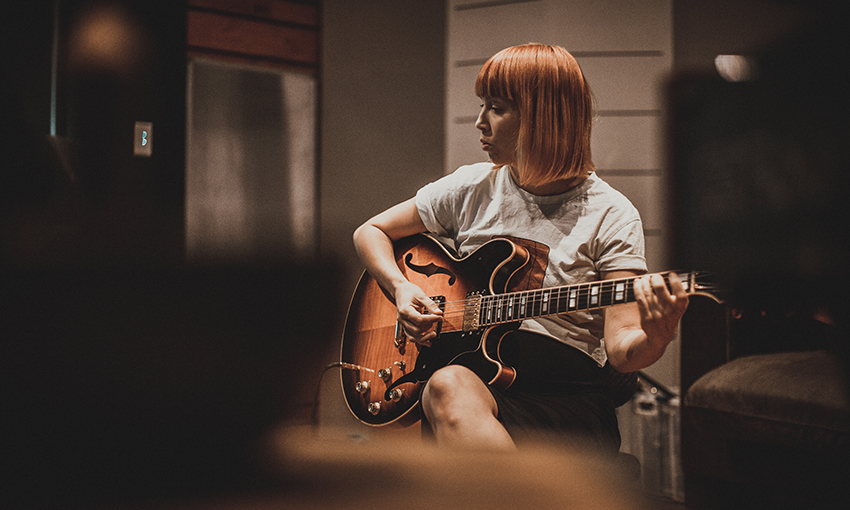 You feel the weight of South Australia’s reputation as the ‘festival state’ every time a new festival program lands on the streets of Adelaide. You can hear a very literal thud as the programs land – windows shudder. The Adelaide Guitar Festival is in this vein – heavy, drenched in world-class talent and decades of experience across a whole galaxy of guitar music genres.

It’s easy to feel put off by this weight and dodge your cultural duty to engage with the bountiful arts this state puts on your plate. It’s never been easier or more enticing to skip the “show” and go straight to dinner (or the bar).

But relax, CityMag has carved a way into the Adelaide Guitar Festival without your needing to know your Bushdances from your Bad Habits – we asked some friends. We asked five.

Koral Chandler is a rock-solid songstress and guitar wrangler. Her projects span bands, solo projects and Ernie. Aside from having impeccable taste, and skill on a guitar – Koral runs publicity for Garden of Unearthly Delights and knows a good show when she sees one.

Why did you put Marc Ribot at number one?
It is my mission to be able to play the kind of guitar that makes people feel all at once uneasy and enthralled. Forget wanting to be like Mike, I want to be like Marc.

When someone really excellent is playing the guitar it sounds like… you’re not even aware it’s a guitar anymore. Like you have lost a sense of where you are, who you are, and why you were there in the first place. Guitar playing (any music creation) is not about the athletics and skill of it: how fast, how loud, how many notes you can cram on one line. It’s about translating a feeling, a place, a vibe. That’s what it is: it’s a vibe. Like Mabo.

George Swallow will be found in the crowd at the Grace Emily Hotel on gig nights, illuminated by the iPad he uses to monitor and adjust the sound for the musicians on stage. George has probably seen more guitars than anyone else we asked but he’s not showing any signs of fatigue.

When someone really excellent is playing the guitar it sounds like… an extension of who they are.

Sose Fuamoli is that rare person who’s making their way in the world as a music writer. Her credits include the AU review, Rolling Stone Australia, Beat Magazine and The Big Issue. She also currently serves on the judging panel for the prestigious Australian Music Prize and you can read a bit more about Sose here.

Why did you put Heath Cullen & The Yearlings at number one?

Heath is one of Australia’s most talented guitarists and yet I feel like he remains one of the country’s most underrated. His vocals are rugged, his approach to playing peppered with grit and drenched in soul, seeing Heath and his band perform is such a fulfilling experience for any fan of the non-distilled blues, rock n roll. A great songwriter and storyteller – Heath’s music is music Guitar Festival punters should definitely be getting around.

When someone really excellent is playing the guitar it sounds like… the most buttery of sounds, or it can sound like the most chaotic of sounds – all delivered with such ease. Guitarists always catch me off guard when they’re really, really good; because they’re such a mainstay element of many bands, when you hear an excellent player at work, it can stop you in your tracks.

Why did you put Grigoryan Brothers at number one?
In terms of outstanding guitarists you really aren’t going to get any better than the Grigoryan brothers. They’re both technically brilliant and musically ambitious, which is the combination I most desire in all genres of music. On top of that they’re two of the nicest people you will ever meet. A little shout out also for Wanderers here too,  I think they’re are the best band to come out of Adelaide in ages and Dusty makes that guitar sing! In short they’re the real deal and if you haven’t seen them you’re missing out.

When someone really excellent is playing the guitar … you forget about the instrument altogether. Instruments are simply tools, when someone is amazing at them you are transported by the music and you forget about whatever instrument you’re listening to. It feels like you’re being carried along by the artist in that moment; it’s both mediative and euphoric!

Dave Blumberg is an enigma wrapped in a cryptic crossword in the back of The Advertiser. The stalwart of The Exeter Hotel’s front bar for many years has moved on – touring Europe before returning home to set up a new live music venue in Adelaide. His low key and laconic manner is as effortlessly cool as his sometimes mullet haircut. We take Dave’s recommends to heart because we heart Dave Blumberg.

Why did you put Marc Ribot at number one?
Marc Ribot is my pick and I wish I could be here to see him! This world is awash with 6-stringed strumbots, and the reality is that it is a rare thing to find a truly unique voice on this most widespread of instruments. The way he uses the guitar is genuinely innovative, a brilliant combination of chops, experimentation and originality, which is exactly what I want to be listening to. I would also love to have a hoedown with Hana Brenecki and Jess Zubkevich and their s##t hot band of local legends. The Grigoryan Bros are pretty damn nifty too.

When someone really excellent is playing the guitar it sounds like… a pod of wild Gibson SGs swimming through an ocean of electric stout full of Bigsby seaweed and tweed sand.

Dave Blumberg’s works can be found on all the major streaming platforms and purchased on LP and digital at Drongo Tracks.