There’s more to comedy in Adelaide than the national and international swill of Mad March, and we’ve found proof. 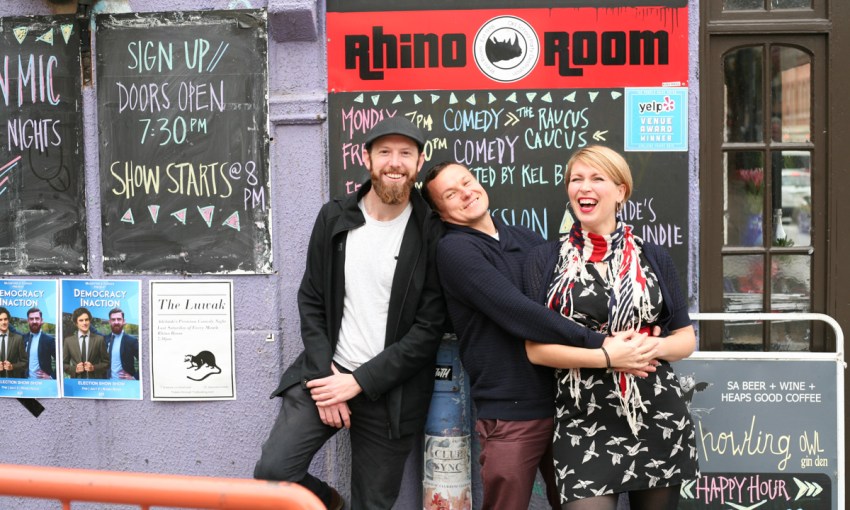 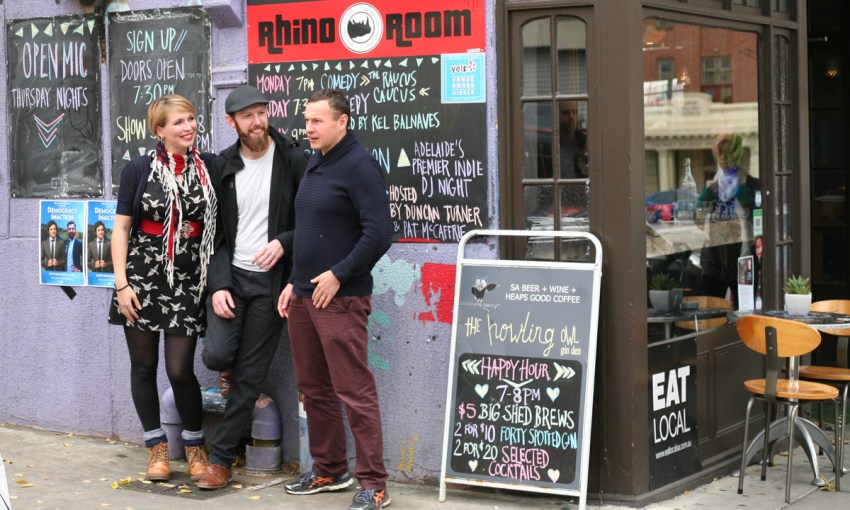 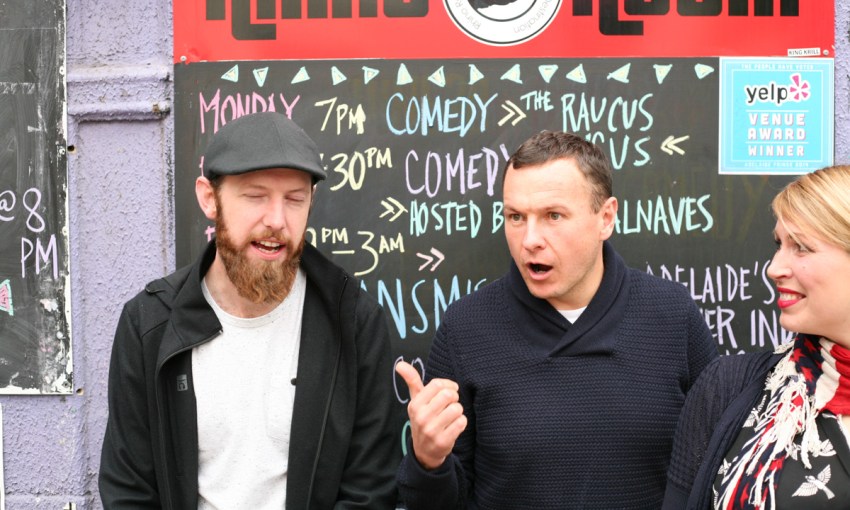 If there’s any kind of official home of comedy in Adelaide, it has to be the Rhino Room.

The venue hosts comedy three nights a week, and it was also the first place that came to mind when comedic couple Mick and Boo Dwyer decided to set up The Luwak, which they tout as Adelaide’s premium monthly comedy night.

To experience the local comedy scene Craig, Mick and Boo are creating, take a look at Adelaide Comedy’s gig guide, or head along to The Luwak on the last Saturday of every month at The Rhino Room. Tickets available here.

As performers who’ve both spent time on the Adelaide circuit – Mick straight from high school, first jumping on stage in November ’97, and Boo after travelling in Australia from the UK in the late ’00s – they know the space well.

“This is where I first saw Mick,” Boo says.

“And thought I was a dickhead,” Mick adds.

“Tom Gleeson was on stage and I’m kind of pulling faces at the comics behind them, Boo’s kind of watching Tom, who’s great, [and] glancing at me going ‘who is this dickhead?’”

The couple returned to Adelaide recently after a little time spent living in the UK. With fresh eyes, they saw space in the market for a highly polished night of comedy that would allow locals to hone the skills they develop by participating in Adelaide Comedy gigs.

“They get to grow and be nurtured, the way I see it, with Craig [Egan] and Adelaide Comedy, which is awesome, and they’ll put on maybe five or ten minutes, then if they want to put on more of a club set, [The Luwak] is the one that they can aim for,” Boo explains.

“Twenty minutes is the magic number globally,” Mick says, “so we’ve got three opportunities each month for people to work towards.”

“It’s kind of that middle ground, where [before] they were kind of getting really good, nurturing care in the beginning, but then not necessarily knowing where to go with it afterwards,” Boo says.

For an audience as spoilt as Adelaide, with the Fringe bringing the world’s best comedians to our Parklands every year, it is a wonder that there aren’t more avenues for our homegrown talent to follow.

It’s not such a mystery to Craig Egan, though.

“They killed all the TV in Adelaide, you know?” Craig says.

“There’s only a certain amount of radio jobs, the ABC shut down last year. Channel 44’s the only one fighting for any kind of community television out there, so where is the money going to come from, other than gigs?”

And gigs are what Craig and his company, Adelaide Comedy, have been providing for almost 16 years now.

The current roster sees him bringing performers to The Rhino Room two nights a week, as well as one night each in Marion and Parafield Gardens, all so Adelaide’s young comics can cut their teeth and work with some of the best in the business.

Craig is not resting on his laurels though. The dearth of opportunity is one that begs to be filled, and with his partner, Lauren Hillman, who is the current guiding force at Channel 44, there has already been collaboration.

Adelaide Comedy favourite Jason Chong put together the political game show The Raucous Caucus (broadcast on Channel 44 and available for viewing here), and although its run is over, Craig hopes this is only the beginning.

“I’d love to see more of a relationship with Channel 44 as we go along, and Adelaide comedians finding a place where they can actually produce live television,” Craig says.

“In the old days of Adelaide you had ABC Television producing local content, all that kind of stuff where opportunities would come up for these kinds of people, and community television, one of the last bastions where someone could learn the craft, is also under threat at the moment.

“So when you ask me do you think Adelaide will become a place where this is viable? I say yeah, I believe it can be, but we all need to start pitching in and making it so… Go out and see something local, go out and make an effort to support those things, because there are plenty of people out there in Adelaide pushing these ideas.”

“And wouldn’t it be nice if everyone could?” Boo says. “Because at the moment they all think ‘oh right, well I’ve gotta fuck off to Melbourne now.”

To help curb the less-spoken-of Comedic Brain Drain, check out any of the gigs listed on Adelaide Comedy’s gig guide, or The Luwak, hosted on the last Saturday of every month at The Rhino Room.