Adelaide-based writer of 'Show Me Where It Hurts', Kylie Maslen, speaks frankly with CityMag about the physical and mental effects of living with an invisible illness.

Kylie Maslen’s recently released book, Show Me Where It Hurts, which explores contemporary society’s lack of understanding of pain experienced by women, was a very personal read for me.

Throughout the book, my mind cast back to my own experience in the medical system.

Not long ago, in the emergency department of the Royal Adelaide Hospital, I was asked to register, on a scale of one to 10, the pain I was experiencing.

I threw out a three: it wasn’t that bad, and the dull ache on my left side only turned into eye-watering agony after being on my feet for a while.

I’d dealt with much worse cervical pain and for much longer periods of time, and so I convinced the doctors at the Royal Adelaide Hospital – and myself – that this feeling was nothing and I would be fine.

I returned to the ER a month later citing absolute agony on my left side and was told it I needed surgery immediately to remove a large cyst from my ovary.

After the operation, my doctor said he was surprised by my initial three-on-the-pain-scale self-diagnosis.

During surgery, they’d discovered the cyst was twisting on the spot, essentially slowly cutting off the circulation to my ovary. I could have lost it if I continued to ignore the pain.

This idea, that women accept the agony that comes with having a cervix, is why Kylie Maslen’s Show Me Where It Hurts is a validating and necessary read.

The book is a collection of essays, peppered with pop-culture references, exploring how Kylie navigated a medical system that still doesn’t adequately understand her illnesses, illustrating the effect this had on her life.

“I have struggled for a really long time to be able to adequately describe my pain and how my pain influences my daily life, and I know that so many other people with chronic illness, but invisible illness in particular, have similar difficulties,” Kylie tells CityMag.

“I really wanted to try and give voice to not only my experience but a sort of broader indication of what other people are going through as well.”

Aside from being a fervent Richmond Tigers football fan, Kylie is a published writer and critic, making appearances in the Guardian, Meanjin, Kill Your Darlings and the Adelaide Review, among others.

But she tells CityMag she had to publish this book before any other long-form projects. This was something she needed to get out.

It is also an urgent call to action for greater endometriosis awareness.

“I was diagnosed with endometriosis and polycystic ovary syndrome, which are two illnesses that are well known for their potential to affect someone’s fertility, but they also are the cause of extreme pelvic pain,” Kylie explains.

“The combination of those things all combined to damage my pelvic nerve to the extent that I have chronic pelvic pain, which is at a level of disability.

“Running in parallel to that, I have bipolar II. And I talk a little bit in the book about how doctors describe the two physical and mental aspects as being comorbid. So when the nerves in my brain fire as a result of bipolar, they often trigger pelvic pain, and vice versa.”

It just really hurts me that there are still so many people in pain and that we have so few answers to what is causing that.

Endometriosis is when the tissue normally found inside the uterus also grows outside this cavity. It can form on the ovaries, bowel and pelvis, and can be incredibly painful. It can also lead to other health complications, like cysts and infertility. Endometriosis affects around 700,000 Australians, roughly one in 10 women or girls.

For most days, Kylie’s pain sits between two and four. But prior to finding a team of qualified health experts specialising in endometriosis, she experienced a 10 every three to four weeks.

“It’s to the point where my body is curled up in a foetal position and I can’t move, or am trying to straighten my torso,” Kylie says of a level 10 experience.

“I’m literally screaming in pain. I’m most likely in hospital or going to be there quite soon.”

Although Kylie doesn’t suffer those extremes anymore, knowing that she will forever live with sustained, chronic two-to-four-level pain makes her feel “tired”.

Having to stay alert for triggers – such as sudden weather changes or food – is also exhausting. But living with invisible illness generally can also be disheartening and depressing, she says.

“It’s really lonely and isolating,” Kylie explains. “You not only feel a sadness for the things that you’re missing, but you start to question your friendships and relationships and your ability to do your job.

“On top of that, there’s the kind of gaslighting from the medical industry, where they’re saying the pain is only in your head.” 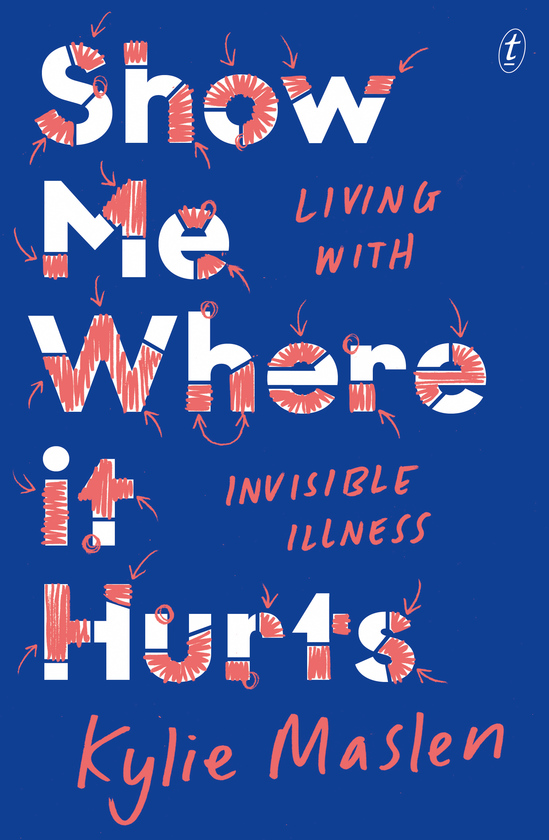 In the past, doctors have questioned the severity of Kylie’s symptoms. At its worst, she has been turned away from emergency departments; they wrongly assumed she was a “drug seeker”.

This taboo is incredibly harmful, she says, but it’s slowly getting better.

“I think my generation and younger have done a lot in terms of calling bullshit and just not putting up with it anymore. I think it’s [the stigma] has caused a lot of harm to a lot of people,” she says.

“Something that’s really exciting is the Pelvic Pain Foundation of Australia, which is based here in Adelaide, they now have a program that goes out to schools.

“That is basically like sex-education but for periods. They are helping to end that taboo and helpin educate young people about not having to put up with pain: this is what it looks like, where you can get help if you need it.

‘Show Me Where It Hurts’ by Kylie Maslen

The Federal Government announced last year it would inject an extra $10 million into endometriosis research and awareness, with almost all of that targeted towards researching alternative methods of non-invasive diagnostic testing, and better understanding of causes of the disease.

Making the experience of endometriosis even worse is the current laparoscopic diagnosis and a treatment that is essentially lasering off excess tissue.

Kylie hopes her book will lead to a greater understanding of what life is like for those living with an invisible illness.

For me, the pain Kylie describes is palpable and real.

“It just really hurts me that there are still so many people in pain and that we have so few answers to what is causing that,” she says.