The art of drinking with Alpha Box & Dice

Alpha Box & Dice know good wine is almost as much about art and labels as it is about grapes and booze.

There’s a concept in advertising and branding (that takes its name from a short story by Hemingway) called the ‘clean, well-lighted place’.

You can see the full range of Alpha Box & Dice’s merchandise here.

In the last few years, this has rippled into the food industry and begun re-contextualising food, and wine, and places in the realm of wholesomeness. Safety. Luxury. Things are clean now.

Alpha Box and Dice never got that memo. Their branding has always been as bold, colourful and irreverent as their wine is drinkable, and they are staying true to that aesthetic as they begin to create their new range of merchandise.

The artist behind their current merchandise range is Drew Abrahamson, an artist and screen printer whose work exists far beyond any clean, well-lit places. 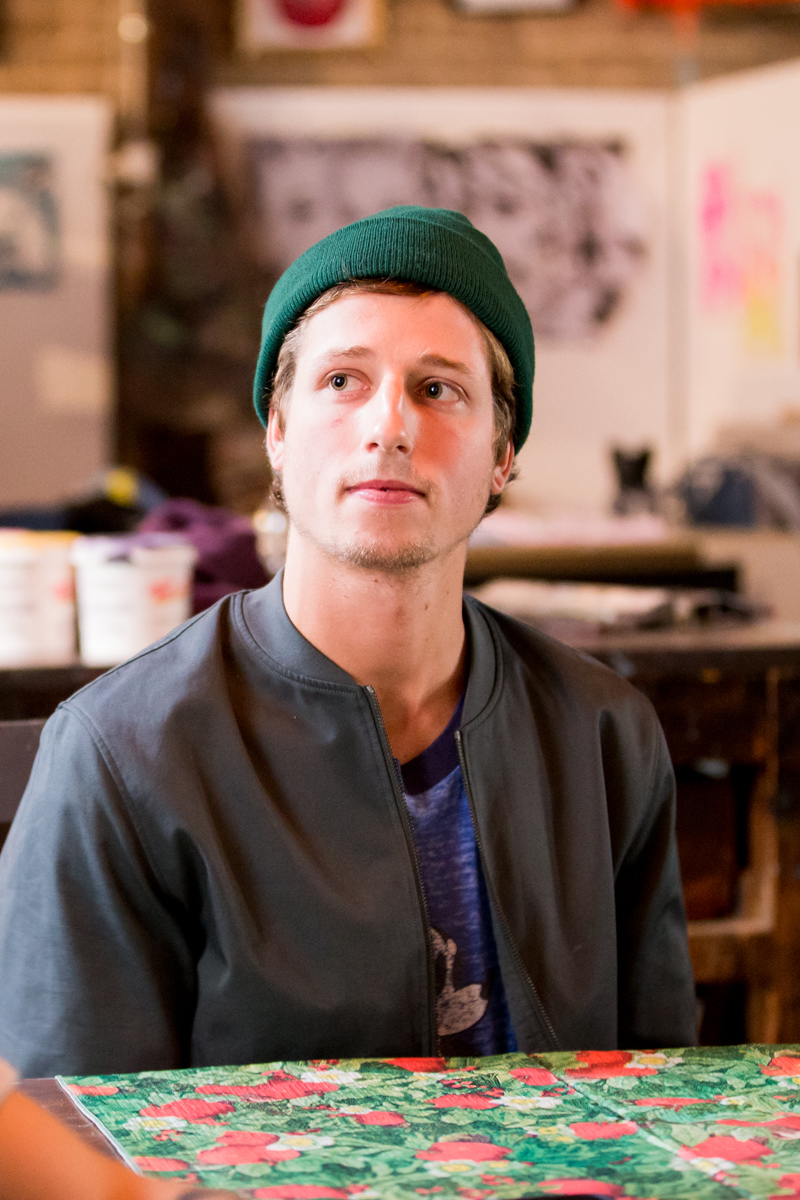 Recently, Drew designed some t-shirts (selling through his Instagram account) which display a bulb of garlic having sex with a chickpea, with the word ‘hummusexual’ written beneath. He also gained national attention for his supreme takedown of One Nation leader Pauline Hanson when he printed her face onto rolls of toilet paper.

“Dylan, the owner of AB&D, came across Drew at a zine swap and exhibition event in the city and fell in love with his work,” says Lachlan Aird, brand manager of Alpha Box and Dice.

“He bought a copy of his zine [a hand-printed comic titled Attack of the Intergalactic Vagina with Fangs] and came to me and was like ‘we need to work with him. We should get him to do our merch’.”

For a brand dedicated to shirking the formality and traditionalism inherent in the traditional wine industry, commissioning an artist like Drew seemed like a natural choice. Given full creative control, Drew took the designs in a characteristically irreverent direction.

“I was working on a vintage at a big winery, and I kept seeing all these dead animals floating in the ferment,” says Drew. “So I created these characters to ride all of these creatures I found in the wine. Working on a wine vintage sucks … like, it’s alright, but it’s long and hard and 12 hour shifts every night. It’s just tough.”

Each of the three designs are available across a range of t-shirts and totes, which were all hand-printed by Drew.

“On each t-shirt there’s a special tag that he’s printed that reads, ‘This is a hand printed product. Wash inside out for best keep. Have a nice day. Drew X AB&D’”, says Lachlan.

“It just makes it so much more special, and makes it feel like you’re wearing a part of them, you know?

“It’s not like we sat down and we were like ‘this is what we’re doing’, it was all very loose and if you would’ve told me that, after that first meeting, this is the kind of range we’d be getting out of it … I mean, I wouldn’t have even be able to picture it. I was expecting something completely different, and I’m so much happier with this.”

“You’re getting the best out of an artist when you do that, give them that freedom,” says Bradley Jay, a British illustrator who has just been commissioned to design the next merch range. 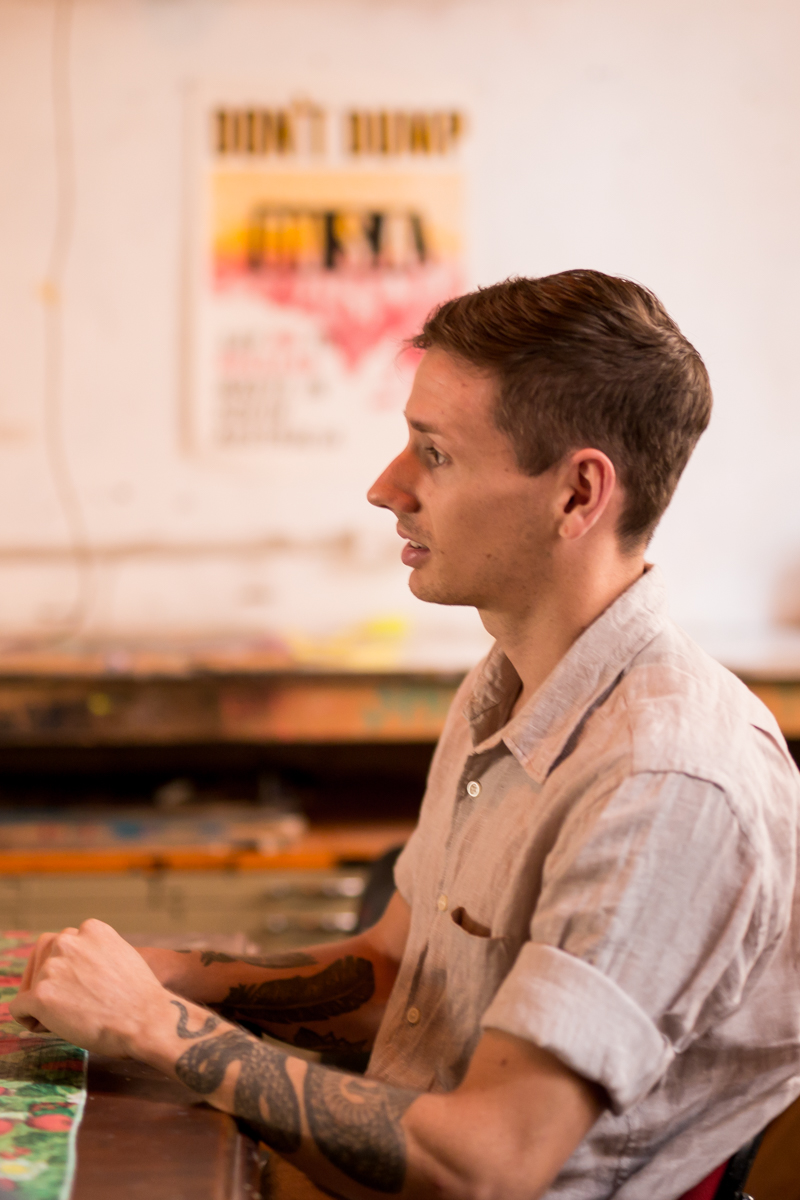 “I’ve worked for so many clients where they keep changing it with amendments and it becomes something that doesn’t feel like yours, it just becomes something else completely that you don’t even like what you’re doing. And then you’ve got clients like Alpha Box that just let you do what you want and trust you and want to see something surprising.”

Bradley has worked with the company since 2012, illustrating the labels for the Wightmare and Rebel Rebel wines.

Someone very special has just arrived… but we have to give him a few more weeks to settle into his new bottled home before he can be released on the world once again. #RebelRebel #2016 #Montepucliano is not too far away! Sign up to our newsletter at [alphaboxdice.com] to find out when… • • • #alphaboxdice #newrelease #newvintage #rebelrebel #bowie #wine #winery #mclarenvale #aussiewine #comingsoon #fresh #southaustralianwine

For the merchandise, he’ll be taking a similarly bold approach.

It’s another example of the innovation and experimentation inherent in a company like Alpha Box and Dice.

“We’re constantly changing everything with the brand, always bending and moving things because trends in wine change so often,” says Lachlan. “So Wightmare is meant to be the ultimate dry white wine and right now it’s a chardonnay but it hasn’t always been a chardonnay and doesn’t always have to be. We like to have fun with it.

“I guess the idea is that AB&D keeps evolving and keeps using different and familiar artist all the time. It makes everything feel more special. We do it with the wines and we’ll do it with the merch … everything is always changing. It’s more exciting that way.”

It is more exciting. But not clean or well lit. And that’s a good thing.