Art After Dark will be a party like no other

Next Thursday, August 9, all of the West End's art venues, plus Peter Rabbit and the West Oak Hotel, will open for one massive celebration of South Australian Living Artists. 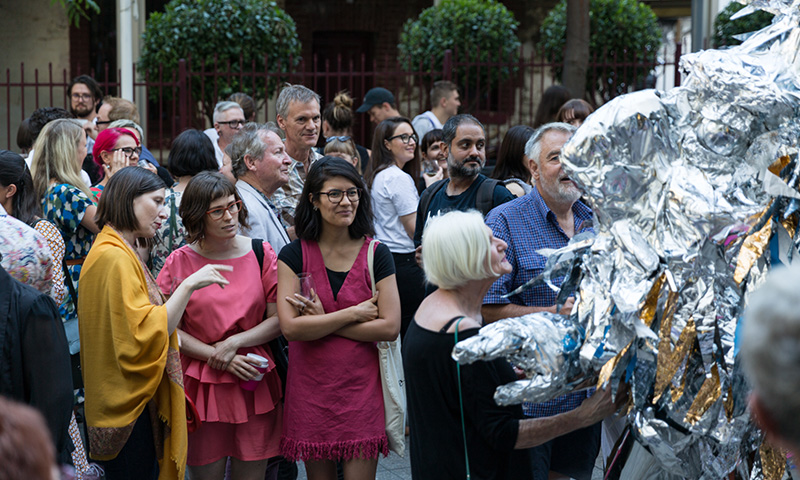 Walking into an art gallery is daunting. They can be dark and they can be incredibly bright. They can be silent places too, so quiet that every noise you make echoes against the walls and off the very art they hold.

Well, that’s how we imagine it would feel if you’ve not been to an art gallery before – if you’ve not had someone do you the solid favour of taking you under their wing and showing you how to use the space and feel comfortable looking at art.

Art After Dark is just such a friend.

Sophia Nuske and Grace Marlow are both practicing artists who also work for art galleries and they totally get how intimidating the gallery space can be. Art After Dark seeks to broaden the audience for art and next Thursday’s event – in the midst of the SALA festival – is a brilliant invitation for anyone and everyone to become a part of Adelaide’s art scene.

“I totally get how intimidating galleries can be,”  says Sophia who works at Samstag Museum on North Terrace. “Art After Dark is a one-night program with 17 venues, with music, with artists, with exhibitions and drinks and all the best bits of an opening night, spread across the whole precinct.”

Grace Marlow and Sophia Nuske stand in the laneway between SASA gallery at west Oak Hotel, close to where Art After Dark’s hub will be

SALA is renowned for bringing living artists into Adelaide’s living rooms. This event will certainly be bringing one of the largest clusters of young, living artists together all at once. They’ll be in the streets, in the galleries and in the pubs and cafés. The West Oak Hotel will have an exhibition of UniSA students upstairs (beer and schnitzels downstairs) and down the road, one of the West End’s best venues, Peter Rabbit, will host a show to compliment your cocktail.

From 5pm – 9pm you’ll be able to wander between venues, be loud, discuss the relative merits of what you see and generally feel at ease sharing the experience with friends.

Grace Marlow is a co-director of Sister art gallery. She has curated an exhibition of moving image works which will be visible on Hindley Street, and she feels Art After Dark is a good opportunity to show different audiences art in different spaces.

“We’re also placing work under the stairs,” says Grace, gesturing down the lane towards Abbotts and Kinney on UniSA’s City West campus. “There’s normally a bake sale under those stairs and so I think that putting art in unfamiliar spaces and reacting to those spaces is really critical for engaging new audiences.”

Sophia and Grace are looking forward to the party next week. The density of art venues in the immediate vicinity has grown exponentially over the past 12 months and this will be a great opportunity to get together and really celebrate the creativity at the core of city.

“We want to make art accessible, that is the primary purpose of any public gallery,” says Sophia.

You can’t get much more accessible than a giant neighbourhood party.