A History Festival exhibition organised by the Australian Refugee Association showcases the migration stories of people from war-torn countries in the Horn of Africa, exploring how they made lives for themselves in Adelaide.

“The camps were divided up into numbers. Mum would say, ‘I was group 37. What group were you?’” Achan Mapor tells CityMag.

“My mum had to leave school in 11th grade because the war broke out, a very, very long time ago, [and] her family was just going from place to place.”

At 17, Achan’s mother was only a couple of years younger than her when she fled South Sudan due to an unfolding civil war.

According to Achan, a recent University of South Australia communications and media graduate born in Tasmania but now living in Adelaide, throughout the ‘90s her mum bounced between South Sudan, Ethiopia and Egypt before landing in Kenya’s Kakuma refugee camp.

The camp was established in 1992 as the result of approximately 20,000 orphaned or displaced South Sudanese boys, and at one point was the largest refugee settlement in the world.

“My story is that I’m a daughter of a refugee,” Achan says.

“The New Land New Hope exhibition to me is almost telling the stories that have never been heard before… and not all the stories are pretty.”

The Mapor family settled in Australia in 1997 and were among a large proportion of migrants to leave the Horn of Africa for Australia.

“During the early late-‘80s, early-‘90s, there was a whole range of communities in the Horn of Africa – from Ethiopia, Eritrea, Somalia and South Sudan – who were basically being forced out of their own countries, or at risk of going to prison, because they are on the opposite side of a fence to the government,” says CEO of ARA, Deb Stringer.

“The Horn of Africa exhibition was essentially created to celebrate some of those stories [and] some of the ways and means by which people came to Australia, but also the successes that they have achieved being in Australia.” 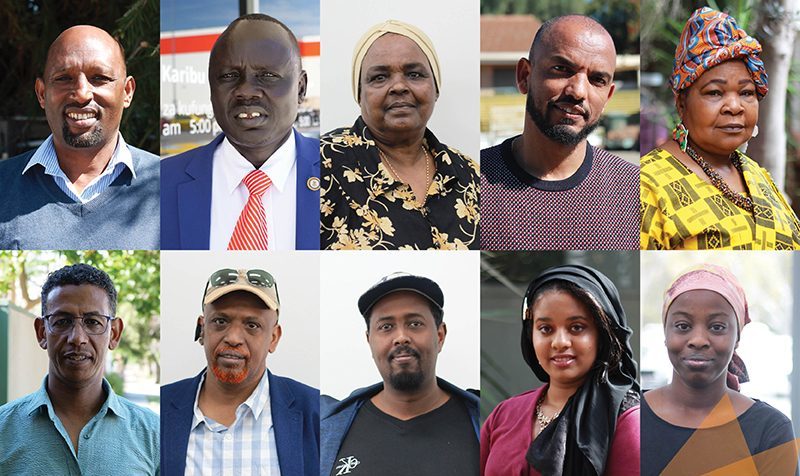 Achan characterises growing up as a first-generation South Sudanese-Australian as “good”, but knows this is very different to her mother’s experience.

Her mother found it “very difficult in the beginning”, Achan says, as someone who had to take English classes.

As someone pursuing a career in media, Achan is also aware of the harmful news reporting wrongly stereotyping South Sudanese youth.

Despite the obvious challenges surrounding resettlement, which Deb says doesn’t discriminate on how “well educated you are” or “how much English you know”, there are silver linings and success stories.

“Mohamed [Beyan] runs African Village Centre in Henley Beach Road. He set up his own business as a response to trying to find work,” Deb says.

“[Another] one of the other stories that I remember – and it wasn’t somebody who ended up in the exhibition – was a man who arrived in the very early ’90s, I think in 1991, and he’s been in the same job for 30 years and so he was really proud of the fact that he found that employment really quickly and has stayed there ever since.”

Achan agrees, and adds that hopefully the process of looking back on this history means the mistakes Australia made during this wave of migration (in the media and elsewhere) will be less likely to be “repeated in the future”.

New Land New Hope runs from 13—30 May at the Multicultural Communities Council of SA at 113 Gilbert Street. For more information, see the event page.