A view into the creative world of incarcerated South Australians

A SALA exhibition happening in the city showcases the art and inner lives of people within the South Australian carceral system. One participant tells CityMag “people would be staggered by the level of wasted talent that sits in prisons." 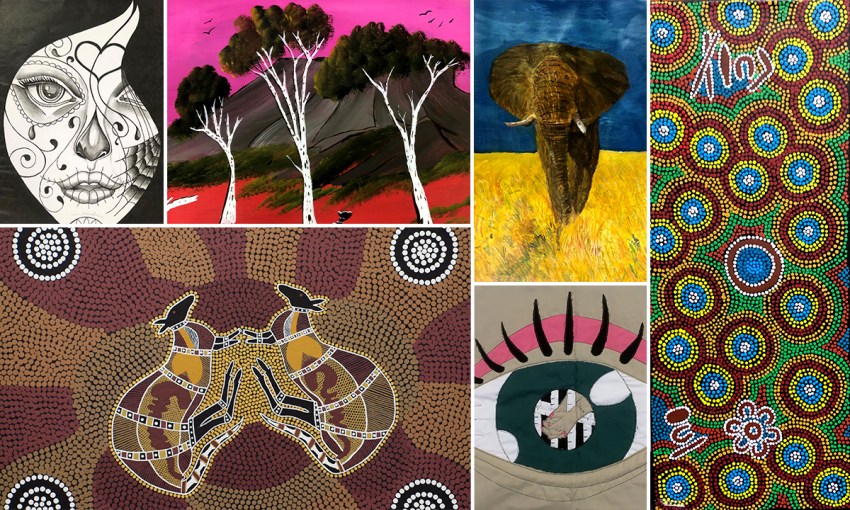 One of this reporter’s favourite songs by troubled country singer Johnny Cash is ‘Man in Black’, released in 1971.

Over a bluesy chord progression, the US songwriter laments a broken prison system and empathises with those who’ve been incarcerated – people often born on the wrong side of the tracks and hardened into criminals after a first-time offence.

‘I wear the black for the poor and the beaten down / Living in the hopeless, hungry side of town / I wear it for the prisoner who has long paid for his crime / But is there because he’s a victim of the time,’ he croons.

Legend has it Cash was arrested seven times and spent a few nights in jail, but he was never incarcerated to the extent of the subjects he sang about.

In South Australia, people from within South Australia’s eight (of nine) prisons have had the opportunity to showcase their stories through their own art, in Artists on the Inside, an exhibition currently showing at the University of South Australia’s Kerry Packer Civic Gallery, located within The Bob Hawke Prime Ministerial Centre.

Happening as part of SALA, there are around 80 works on display, which span disciplines such as creative writing, traditional Aboriginal dot paintings, soap sculptures, abstract illustrations and period paintings.

Running since 2012, and organised by the Department for Correctional Services, Artists on the Inside aims to give “the public a unique insight into the lives of prisoners and the issues many face each day”, a State Government press release says.

I have an active mind and want to be challenged, which is difficult in prison.
—Prisoner B

All entries have been judged by a panel of arts industry professionals, including contemporary Pitjantjatjara and Yankunytjatjara artist and muralist Elizabeth Close.

She tells CityMag the collection is important because “we are all the sum of our stories.”

“Obviously, [the prisoners] are in there for a reason, and they’ve made mistakes and poor choices, but they’re human and we need to focus on rehabilitation – and art is a tremendously important part of that,” she says.

Within the last 12 months, Elizabeth has completed a number of public murals within South Australian penitentiaries, including the Adelaide Women’s Prison and forensic mental health facility James Nash House.

She enjoys increasing the visibility of Aboriginal art and culture in those settings, she says, by giving Indigenous prisoners and patients “culturally safe” artwork, conceptualised through workshops.

This overrepresentation also compels Elizabeth to work in these spaces.

Through cooperation with the Department for Correctional Services, CityMag electronically interviewed (read: emailed) Artists on the Inside participants about their work. The artists and artworks have been de-identified by corrections, but they share with us a slice of their personality, explaining what inspires them to create and what assumptions about incarceration they’d like to squash. 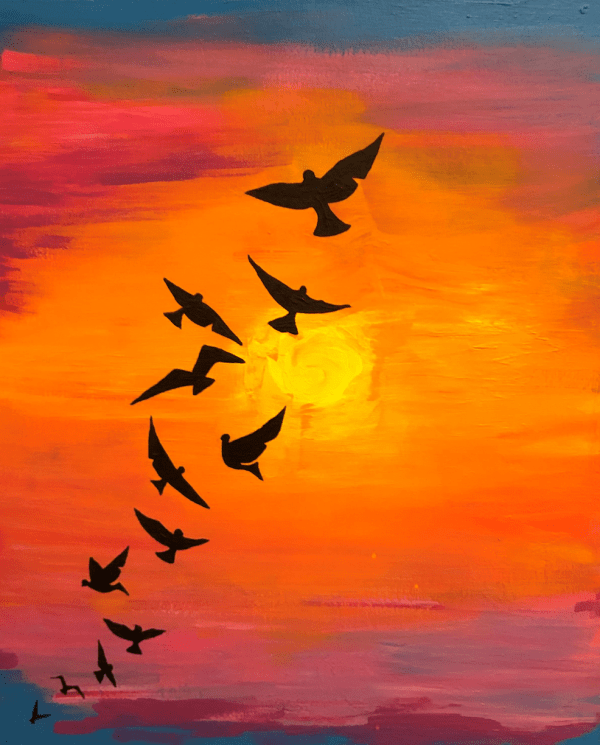 CM: How does your art fit in with prison life?
A: I saw art as a coping tool, a way to manage the reality of a long jail term.

CM: What’s it like having your work exhibited as part of this collection?
A: I deeply appreciate the opportunity to exhibit my work and the viewers’ comments are treasure. The effort the organisers put in must be significant and I want to thank them all.

CM: How would you describe your art to someone who has never seen it before?
B: I work with acrylic paint on canvas, banners or artist paper. I also work with 3D objects, giving them new life and a story, such as sneakers, caps, wooden pizza trays, polished wood etc. I have experimented with watercolour paint and gained results from applying sea salt, plastic film and masking fluid to achieve a variety of textures and amazing colour effects.

CM: How does art fit in with prison life?
B: I have an active mind and want to be challenged, which is difficult in prison. I choose vibrant colours, ideas and topics that are positive, beautiful or uplifting to the viewer. It makes me happier creating them while in prison and I want to brighten up an environment that often lacks colour and positive thinking for others. 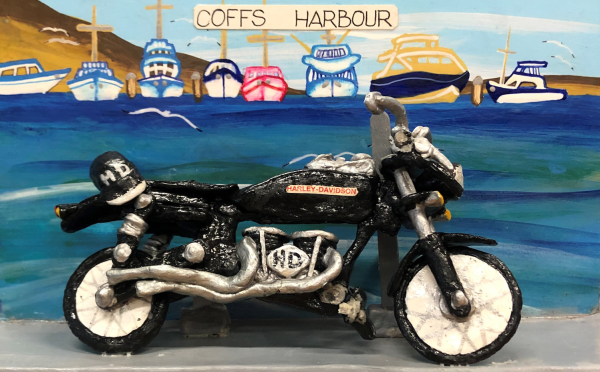 CM: What’s it like having your work exhibited as part of this collection?
B: It’s great to think people are critically assessing your work. It gives you another reason to keep trying to improve.

CM: What’s one assumption about the system of incarceration you want to squash?
B: It is important to be aware that while prisoners may have made mistakes at varying levels, they once were contributing members of society and should be allowed and provided with every opportunity to rehabilitate and move on from their past failings without lifelong persecution.

CM: How does your art fit in with prison life?
C: To immerse myself in painting is better than mindfulness. It puts me in another world for a while. 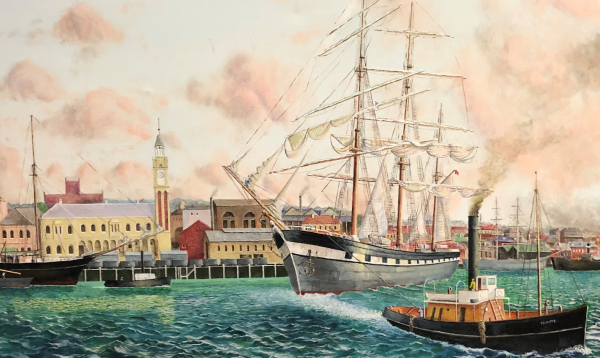 CM: What’s it like having your work exhibited as part of this collection?
C: Artists on the Inside is a privilege for me, and I hope my art makes someone happy or they enjoy it. 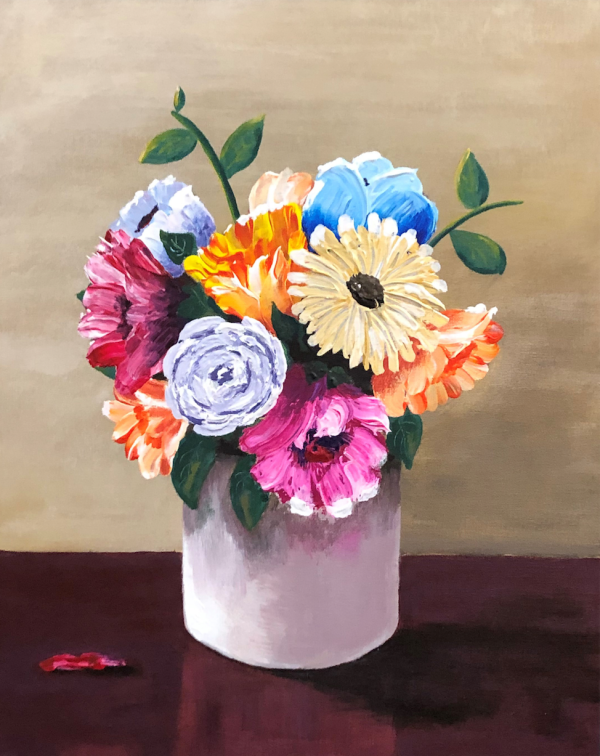 CM: How would you describe your writing to someone who has never read it before?
G: I wrote three pieces of work but the one I’m particularly proud of is my screenplay called The Council. It’s a pilot episode of a political satire about an inept council run by the state’s most popular mayor.

As a lover of political satires such as Parks and Recreation; Yes, Prime Minister; The Hollowmen and Utopia, I wanted to have a go at writing something wildly out of my comfort zone.

CM: How does art fit in with prison life?
G: I make art as a means of planting myself in the moment. It is a form of meditation for me, something that allows me to forget the troubles of life, even momentarily. It is a cathartic process.

CM: What’s one assumption about the system of incarceration you want to squash?
G: I believe the general public assume people in prison are talentless and complete outcasts. That is just not true. People would be staggered by the level of wasted talent that sit in prisons.