A Day of Clarity announces 2019 lineup

Headlined by Camp Cope and featuring 46 bands and artists across seven venues, the 2019 edition of A Day of Clarity will be huge.

Multi-venue East End music festival A Day of Clarity has dropped its 2019 lineup, headlined by Melbourne trio Camp Cope and with a total roster of 46 bands and artists to appear across seven venues.

Now in its fifth year, A Day of Clarity, founded and run by Matt Hovath of Clarity Records, has become a landmark event on the Adelaide live music calendar, with new venues added this year to accommodate for the festival’s growth.

See the full lineup at the bottom of this article.

“For the first time this time we’re using the Freemasons Lodge over on North Terrace, just because the festival’s grown to a size where we need a bigger space to fit the people,” Matt says.

“Last year was a lot more centralised compared to other years, and we felt it was a bit tight. We’ve gone back to spreading it out just a little bit further… That way we can fit in more bands.”

Matt has been trying to bring Camp Cope to Adelaide for the festival since its inception, he says “but they’ve got such a crazy busy schedule that it’s never really worked out. But this year, all the stars aligned and it happened.”

There’s a strong local contingency, with stalwarts West Thebarton high in the billing, and Hotchkiss and Katie Pomery being two bands Matt is excited to be highlighting.

“We started A Day of Clarity to try and help bring more people to shows… that’s one of the reasons why the festival is free – we wanted to eliminate any barrier for people wanting to go out and see live music,” Matt says.

“It’s our way of giving back to the community and trying to encourage people to go to not only this show but more local shows. Because we’ve had a lot of people come into the shop post-festival and say that they saw a band they never knew existed and have since started going to shows from that. That’s a positive.”

“We know some of the girls involved with Girls Rock!. They’ve been doing some amazing work,” Matt says.

“We’ve gone to a few of their fundraising shows and stuff. I noticed that at Laneway they had a specific Girls Rock! Stage, and I thought that was a fantastic idea, so thought it would be cool to have them involved as well, and help continue to support what they’re doing.”

While A Day of Clarity’s curatorial philosophy primarily centres around “bands we like, bands we notice who are doing some really great things, also bands we know that our customers like as well,” Matt says a strong focus for the 2019 event was “wanting to not just book all-male bands.”

“You’ll find every artist has at least one non-male-identifying member in the lineup,” he says.

A Day of Clarity 2019 is a free event happening on Saturday, 10 August. Keep an eye on its Facebook event for updates. 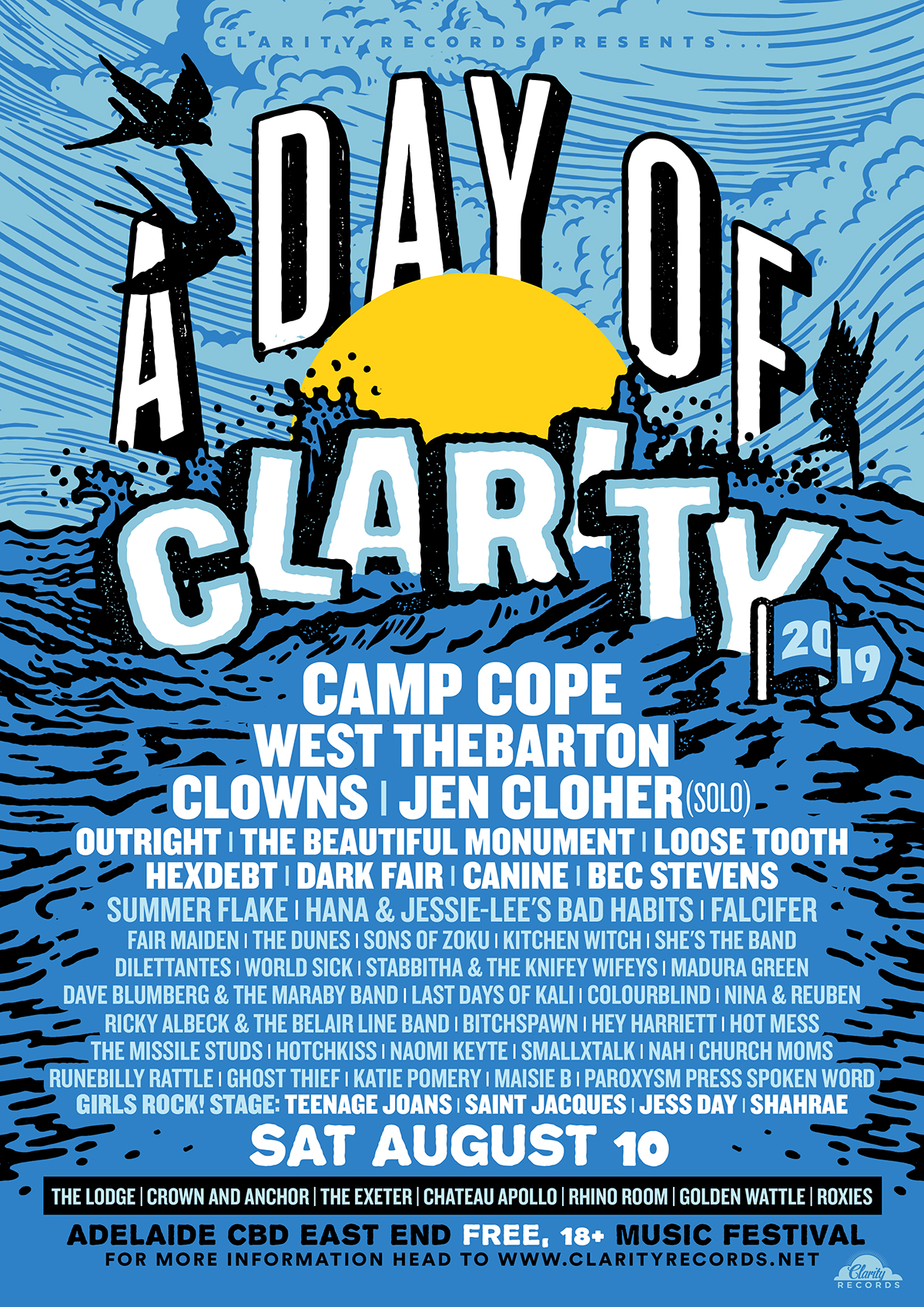