Architecture – formerly the preserve of big firms with big staff – is a changing industry. Now, clients are looking to small agencies with new ideas to get the most innovative and cost-effective solution. We meet the little Adelaide firms who are making their way in this new version of normal. 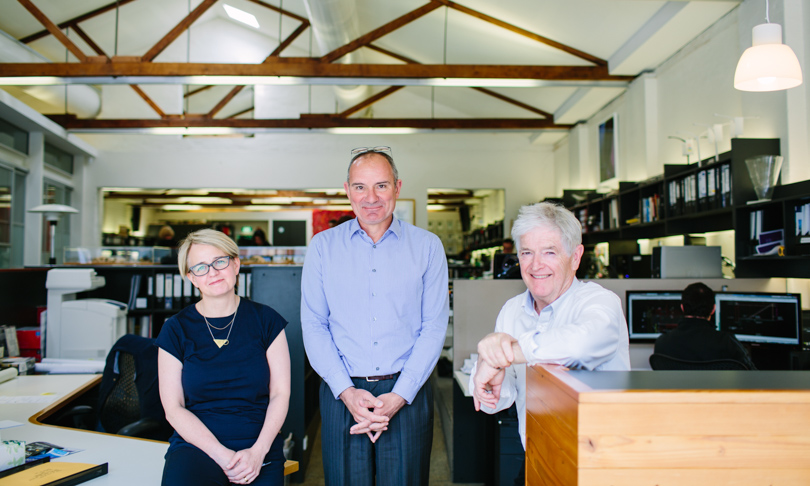 With a combined 75 years of architectural experience, Grieve Gillett Andersen Architects continues to build on an already impressive history of influence in Adelaide.

“I did the Lion Arts Centre and the Jam Factory and those sorts of things, and Tandanya.

Listening to Steve and Paul Gillett’s architectural history together, it’s strange to think how Adelaide might have looked without them.

The National Wine Centre, for example, may not have landed in the state without their cunning intervention in plans to demolish the heritage-listed Tram Barn and Goodman Building.

At the very least, there’s a substantial amount of wine we can thank the practice for.

Now with the recent merger of third partner Dimitty Andersen, there’s a renewed personal area of focus for the business.

“[Before the merge], we had the opportunity to do a small number of houses in the practice, but housing is one of the areas where architects have the opportunity to… create solutions that are people specific,” Paul explains.

“Dimitty had been working that space successfully for a long time.”

The people-focussed ethos binds the three architects, and it filters not only into their relationships with clients, but also how they run their practice.

“It’s important for us… to have a good connection with our staff and our clients. Some building contracts take many, many years, so there needs to be a sort of consistency of those relationships,” Dimitty explains.

“I think [that’s] why the smaller model works well. And then if we need to get on board with a bigger practice to bid for a bigger job, well then that’s what we do.”

As some larger South Australian practices fragment, and the seemingly infinite number of architecture graduates enter the market by setting up small practices, it’s an energetic (if crowded) time for the industry.

But if the trio are right, there’s a trend in motion that will see the role of the architect expand well beyond the drawing board.

“There are opportunities for architects to bring their problem solving and people skills to other businesses at strategic and management levels,” Dimitty says.

“Architects are being valued more and joining [non-architectural] companies, because we’re seen to be the ones who can make connections between lots of different disciplines.

“It’s something that is a potential growth area for architects.”

Whatever the future holds, you can be sure Grieve Gillett Andersen will be part of it.

These micro firms are at the bleeding edge of Adelaide’s architectural scene, with national and international client lists and more awards than staff.

The seeds of Studio Gram were sown during group assignments at university while Dave Bickmore and Graham Charbonneau were still studying. Rather than the usual outcome of collaborative uni projects (sleep deprivation and lifelong enemies), the pair has managed to quickly build a business with a reputation for innovative use of space and an ability to share their client’s story through design. Demand has taken Studio Gram from their headquarters on Pirie Street to Sydney, Melbourne and Indonesia, and if you’ve ever stepped into Mexicola, Abbotts & Kinney or Osteria Oggi (and we suggest you do), you’ll know why.

“We just try to do a great job of everything we lay our hands on.” It’s a simple philosophy from John Endersbee, and one that translates into the modern designs of Locus Architecture. After working for larger practice Tectvs, John scaled down with Paul Pizzolato in 2010 and their focus on residential projects has resulted in beautiful yet affordable apartments and housing spotted throughout Adelaide and into the suburbs. Locus’ list of accolades is long and (if their work ethic is anything to go by) ever growing, aided by their ability as a three-person operation to be nimble in a relatively tough architectural marketplace. The key, John says, is staying fresh, relevant and passionate.