LIFE is fighting for a better future for the Australian worker

As we chart our way out of the COVID-19 pandemic, Living Incomes For Everyone (LIFE) wants to see Australia foster more compassion for working, underemployed and unemployed Australians living on the poverty line.

Nikita Radford lives in Adelaide and has received varying forms of Federal welfare payments since she was 16 years old.

At 16, Nikita was living in a single-parent household and suffered from poor mental health.

She tells CityMag she “couldn’t get a [part-time or casual job] for a number of reasons.”

Find out more about the LIFE (Living Incomes For Everyone) campaign here:
Facebook

Her mum helped her onto the welfare path at such a young age so she could learn the value of a dollar, but also to acquaint herself with a system known for being “tricky to navigate.”

Nikita is now 29, living in a sharehouse, and completing a Flinders University Master of Public Health and University of South Australia Master of Sonography.

Before COVID-19 hit, she was receiving roughly “600-ish” dollars a fortnight from what was formerly known as Newstart. Half of the payment ($300) went towards rent, $200 was for bills – electricity, internet, water, gas – and $100 was for petrol and “some food”.

“My mum bought all my clothes for me,” Nikita says. “We went to op shops to get cheap clothing.”

“I also had an arrangement with my housemate where he contributes towards my food and I drive him places.”

In the last 12 months, Nikita has unsuccessfully applied for over 100 public health jobs. She also applied for jobs outside the industry, and says she was willing to do grunt work, but these leads similarly “went nowhere”.

Before the pandemic, South Australia already claimed the title of the country’s worst state for unemployment. In February, our joblessness levels sat at 5.8 per cent – the worst in the nation – according to the ABS.

The most up-to-date data says in June, South Australia’s unemployment levels shot up to 8.8 per cent. At the time, the national average was 7.4 per cent.

The Federal Government reacted to COVID-19 by creating the JobKeeker program, which kept employed workers from being stood down. They also transformed the Newstart program into JobSeeker.

The most noticeable change to the benefit was an additional $550 fortnightly supplement to the existing payment, and the scrapped mutual obligation requirements.

This changed how Nikita lived.

“I had money set aside to go to the dentist for the first time in 10 years,” Nikita says.

“I also put money aside to pay for my licence renewal and car registration and insurance for next year, because I was really unsure if I would be able to save up enough money to be able to afford that.

“That took a lot of strain off of my brain.”

Last month, the government announced it would alter the JobSeeker and JobKeeper programs. From the end of September, the extra fortnightly $550 supplement will decrease to $250, meaning the total fortnightly payment will be $865 instead of $1,115.

Those on JobKeeper will also receive less, and the amount they receive will be determined by a tiered system.

Although the announcement came with news JobKeeper and JobSeeker would be extended to next year, for Nikita, less money means she will soon need to start relying on the goodwill of others for essentials like food.

“[The Federal Government] were saying, ‘Oh, we don’t want to make people lazy,’ but starvation and homelessness are not really motivating factors for people to go find work,” she says. 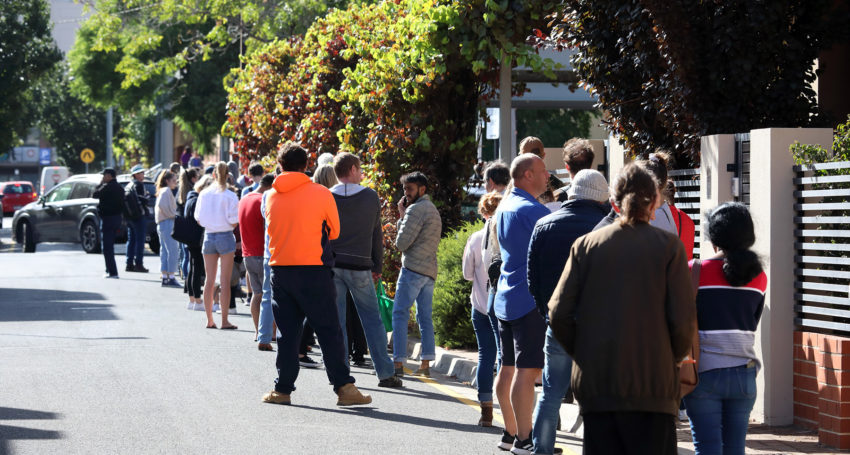 People queue around the corner of an Adelaide Centrelink office following widespread job losses due to coronavirus restrictions. This picture: Tony Lewis

Nikita is just one of many people currently living in precarious financial situations in South Australia. Modelling from The Australia Institute suggests 22,000 South Australians, including 3,000 children, will be pushed into poverty when the Federal Government’s coronavirus supplement is slashed by $150 per week from 25 September.

The LIFE campaign – an organisation fighting for the right to a living income, is currently fighting to ensure this doesn’t happen.

LIFE (Living Incomes For Everyone) is a national coalition, backed by over 70 unions and grassroots organisations, with three simple demands: maintain the original JobKeeper rate, lift all other welfare payments – such as pensioners and those living with disabilities – and end “harassment” in the job provider sector.

Eileen Darley heads up the Anti-Poverty Network in South Australia and is one of 12 LIFE co-conveners.  She explains South Australians most at risk are those who are unemployed.

“As you would know, we’ve got a very high unemployment rate,” Eileen says.

“The national figures say there’s one job at the moment for 13 workers and applicants, but in South Australia, it’s one to 19.

“That’s how much more significantly in trouble we are with our economy in South Australia, despite the benefits that we have on the medical front at the moment.”

LIFE’s aim is to represent all minority groups and disparate unions, but there is a distinct emphasis on fighting for those at the bottom of the socio-economic ladder – the lower 40 per cent who may not have their voice heard and are likely to be the worst affected by the economic implications of COVID-19.

“What we’re really trying to do is something quite old fashioned. We’re trying to build a people’s movement,” Eileen says.

“We’re trying to say that people that are low-income earners, and people that are income support recipients can make our own movement, to the point where they have to listen to us.”

“[LIFE] is a way for me to express my solidarity with all Australians who are doing it tough in one way or another,” he says.

“I think there are two possibilities for how COVID-19 will pan out: if the government has its way and succeeds in its approach, with what they themselves call a ‘business-led recovery,’ then a better society is unlikely.

“All the problems, the very serious crisis-level problems, that were in place before COVID-19, will not completely be solved. Poverty will still be extreme and there will be other serious problems, like problems in our healthcare system and in parts of our education system too.

“On the other hand, if a movement like ours is making an impact, then there is a chance for a more democratic and egalitarian direction for our society.

“Many problems will still be unsolved, but there will be much richer potential for real progress to be made. It will be a hell of a lot more democratic, and of course, focused on egalitarian standards of sharing and supporting each other.”

Don and Eileen are elusive about the literal and immediate actions the movement will take – there “may be” protesting and letter-writing over the next couple of weeks – but individuals should reach out via social media to find out how to participate.

The duo first recommend reading the demands (below), then contacting state representatives (as listed on Facebook) to help LIFE.