It’s been more than three years in the making, but a wetlands project in the east park lands designed to mitigate flood risks associated with a changing climate is on the cusp of completion.

“Hell of a mound,” says wetlands designer Robin Allison of Design Flow, while summiting a mountain of cracked clay dirt.

For more information on the Brown Hill and Keswick Creek Stormwater Project, visit the website.

With an A3 printed plan as our guide, we approach a three-metre-high viewing mound, which offers a view across Pakapakanthi Victoria Park.

From here, we see a family of earth-moving machines shuffling around dirt in an empty basin, or as Robin aptly describes it, a “big hole in the ground”.

Once the project is complete (slated for December 2021), this perch will offer views of a constructed wetland in the east park lands, filled with shallow water, bugs and up to 100,000 water plants.

It’s Robin’s hope that the reformatted piece of the park lands will become an attraction for animals and people alike.

The wetland will snake around significant areas of the former racecourse, such as a band of 100-year-old trees and a grassy conservation area for the Chequered Copper Butterfly.

“The Brown Hill and Keswick Creek Stormwater Project (BHKC) has been in the making for 15 or so years,” says project director Peta Mantzarapis, who joins us onsite wearing a hard hat and hi-vis vest.

“We’ve been designing this wetland in particular for about three years, since 2018. This wetland was identified as a good way of meeting objectives but also delivering a premium community asset.” 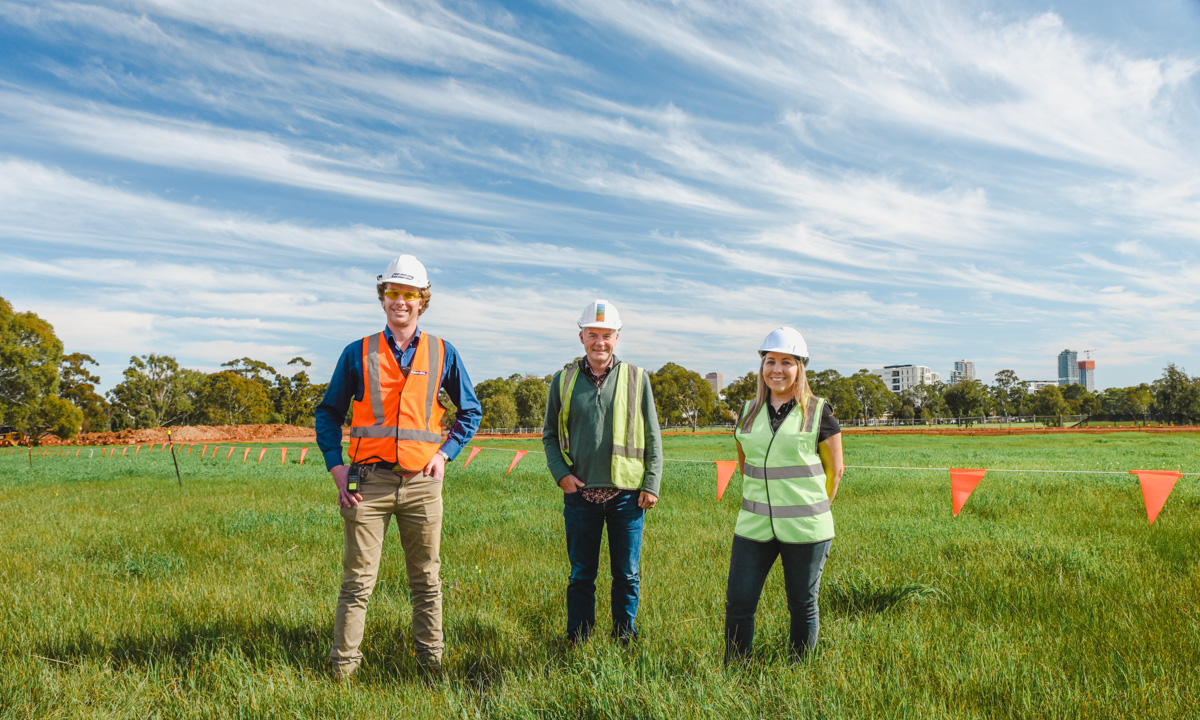 This new wetland is not purely an exercise in biodiversity and aesthetics. The project is a collaboration between five metropolitan councils – Adelaide, Burnside, Mitcham, Unley and West Torrens – with the aim of managing the waterflow of the South Park Lands Creek, which flows west through the south-eastern pocket of the park lands.

With the aid of the wetlands as a catchment, the risk of flooding events in downstream residential areas, such as Mitcham and Unley, is reduced.

According to an official BHKC report from 2016, there hasn’t been a “significant” flooding event in 16 years, but Peta says climate change was “definitely a consideration” when formalising plans.

“According to the 2016 report, we’re mitigating against a one-in-100-year flood event,” Peta explains.

“But there’s a lot of reports and studies that suggest in the event of climate change continuing, a one-in-100-year event may become more like a one-in-70-year event or one-in-50-year event. So more intense and frequent events.”

There are still bridges, boardwalks and garden beds to be built, but even in this early stage the site has had to deal with the pains of Adelaide’s wettest winter in five years.

“It’s a bit harder to bog the dozer or the excavator, but it still can happen,” he laughs.

While walking the hole’s perimeter, Robin says he’s designed roughly 50 wetlands across Australia in his 25-year career, including in Felixstow and St Clair. But he’s only delivered three projects of this magnitude.

“Wetlands of this scale are certainly rare in CBDs because there typically isn’t 3.5ha of available space,” he says. 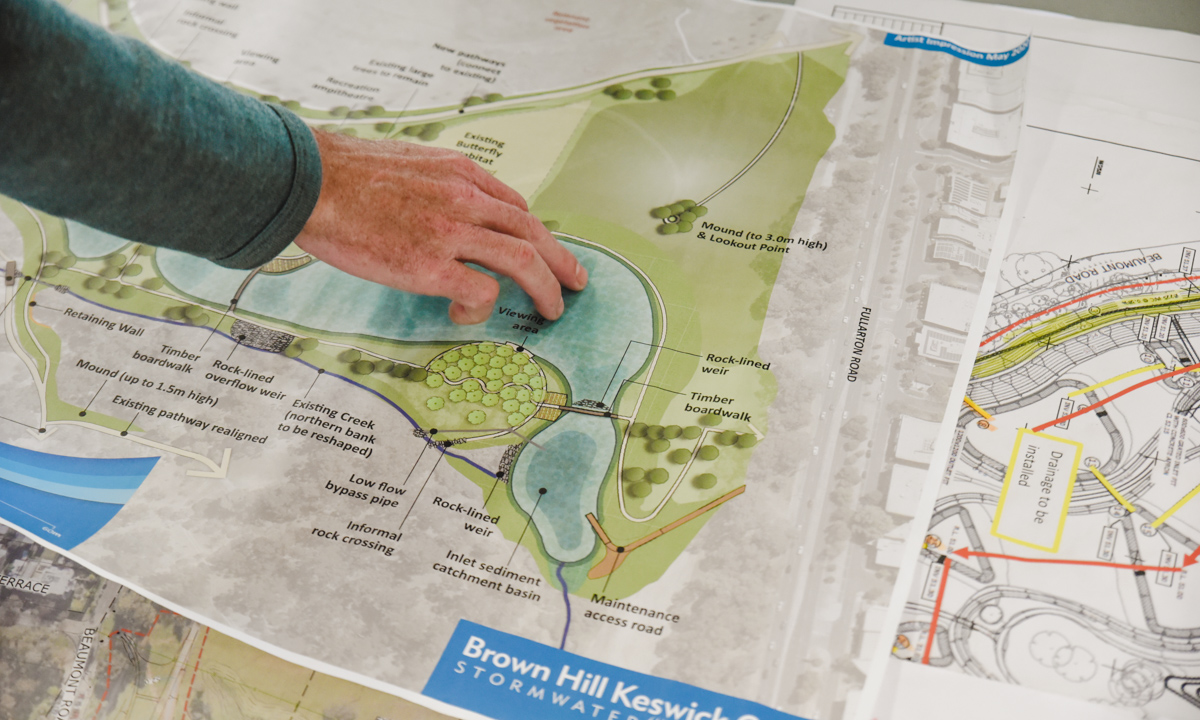 Taking a step out of the long grass, Robin takes us through how the system will work.

“Water from the creek will go into what we call an inlet pond, which is a deep area where the sediments drop out and slows the flow down,” he says.

From there, the water will move into a shallower chamber filled with plants, which filter out pollutants, such as litter, dirt and fertiliser, and provide food for wetland animals, such as frogs, fish and snakes.

Vegetated beds separate the deep pools so “when the water level drops over summer, the water recedes back into the deep pools, and you maintain that habitat for mosquito predators,” Robin says.

To stop the water seeping out of these chambers, the wetland is “built like a bathtub”. An impervious liner made from synthetic clay is installed on the water bed, covered with topsoil.

The water is held in the wetlands for roughly three days before it then flows through an outlet and back into the South Park Lands Creek.

Looking out across the site, Robin says he’s a firm believer in the power of wetlands. Not only for their natural benefits, but their social uses, too.

“The biggest kick I get out of it is when you turn up on a Saturday and there’s people everywhere, walking around, getting down, people right at the edge of the water,” he says.

Hell of a mound. 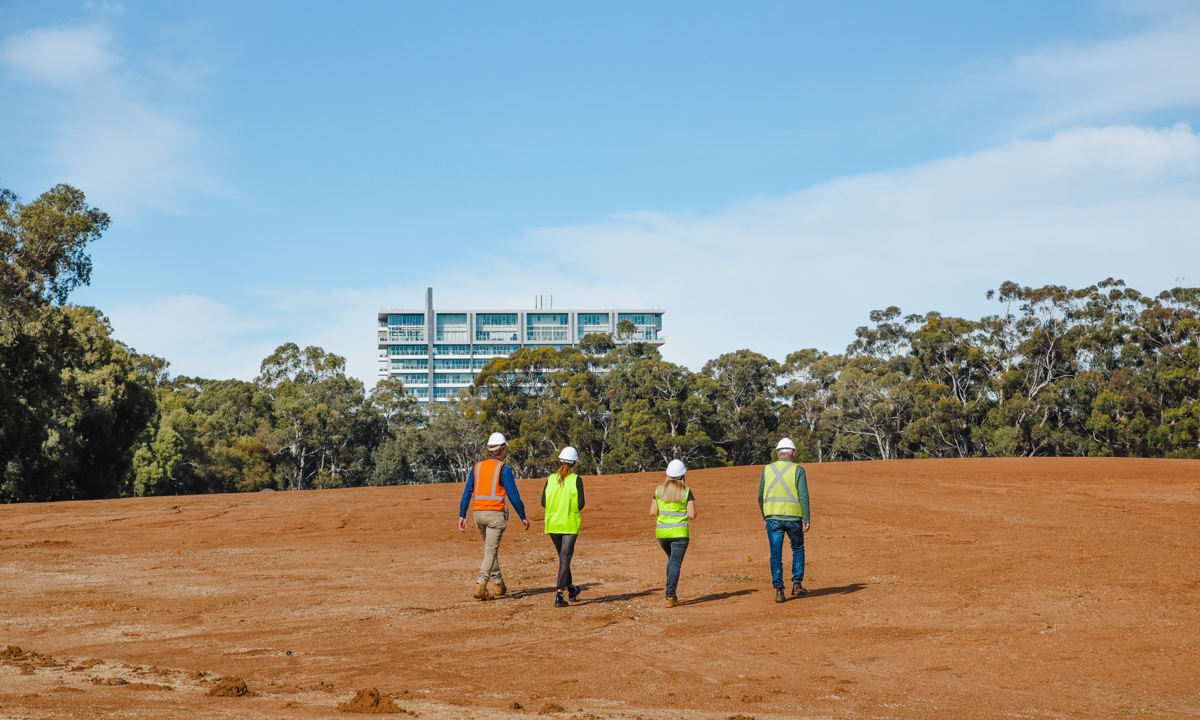