After starting with a bang amongst an underserved local vegan market in 2012, Goodwood vegan supermarket Everything Vegan will quietly cease trading in March.

Last Friday, Everything Vegan announced on Facebook it would close after eight years of operation.

“Poor trading conditions” over the last two years and competition with large supermarket chains forced owner Kym Henley to make the tough decision to not renew the Goodwood Road shopfront lease at the end of March, nor continue the online store.

Everything Vegan
172 Goodwood Road, Goodwood
Mon-Fri: 9am ’til 5pm
Saturday: 10am ’til 3pm

Everything Vegan will close in March.

Although Kym couldn’t reveal just how bad profits were over the period of low turnover – “I’ve been too scared to look at the figures,” she tells CityMag – there was a time when business boomed for the proprietor of vegan clothing, cosmetics and food products.

What started as one woman’s quest for vegan Lamyong mini-steaks in 2012 inadvertently became a full-blown career driven by demand.

“When I was younger, people thought I was a freak because I was vegan,” Kym says, who hasn’t eaten meat in 40 years.

“And until recently, vegan food was very scarce.

“In 2012 I remember going to a place in Lonsdale that had the Lamyong mini-steaks; I’d tasted them somewhere and looked it up and thought ‘Where do I get this?’

“It all started that year because I thought, Adelaide needs a place where you can buy these things in one place.”

Kym had a feeling there must be others hungry for meat- and dairy-free products in South Australia, so she bought faux meats and cruelty-free makeup in bulk and sold them on her newly minted online marketplace, Everything Vegan.

Originally the products were kept stacked in her bedroom, but when it became overrun they were moved to the kitchen floor.

Kym’s home eventually became a supermarket in itself, with aisles-worth of stock stacked in hallways. She built a shed for the hoard, but that didn’t solve her problems.

“People would say when I would deliver the parcels, ‘I see you’ve got the online stuff, can I come in and have a look?’”

Keith Smith has been shopping at Everything Vegan for years.

“I said ‘It’s only on our property,’ sort of thing, but it was happening more and more. I realised I’ve really got to open up something because people wanted the touch, feel.”

In 2013, Everything Vegan went bricks and mortar. In a 120-square-metre grocery store on Wright Street, it expanded to offer over 500 plant-based products, including pet food, chocolate, cheese, cleaning items and cookbooks.

Two years later it evolved into the 180-square-metre Goodwood Road shopfront, and, for a period, diversified into a café serving vegan junk food – Adelaide’s first v-bomb, hamburger and seafood basket – plus coffees, sweets and soups, as well as its retail offerings.

But after a surge in success, it lurched.

“Three years ago we could have five staff on when it was busy, but when it’s busy now it would be two at max,” Kym says.

“Two years ago – that’s when the larger chains knew there was a trend in vegan food.” 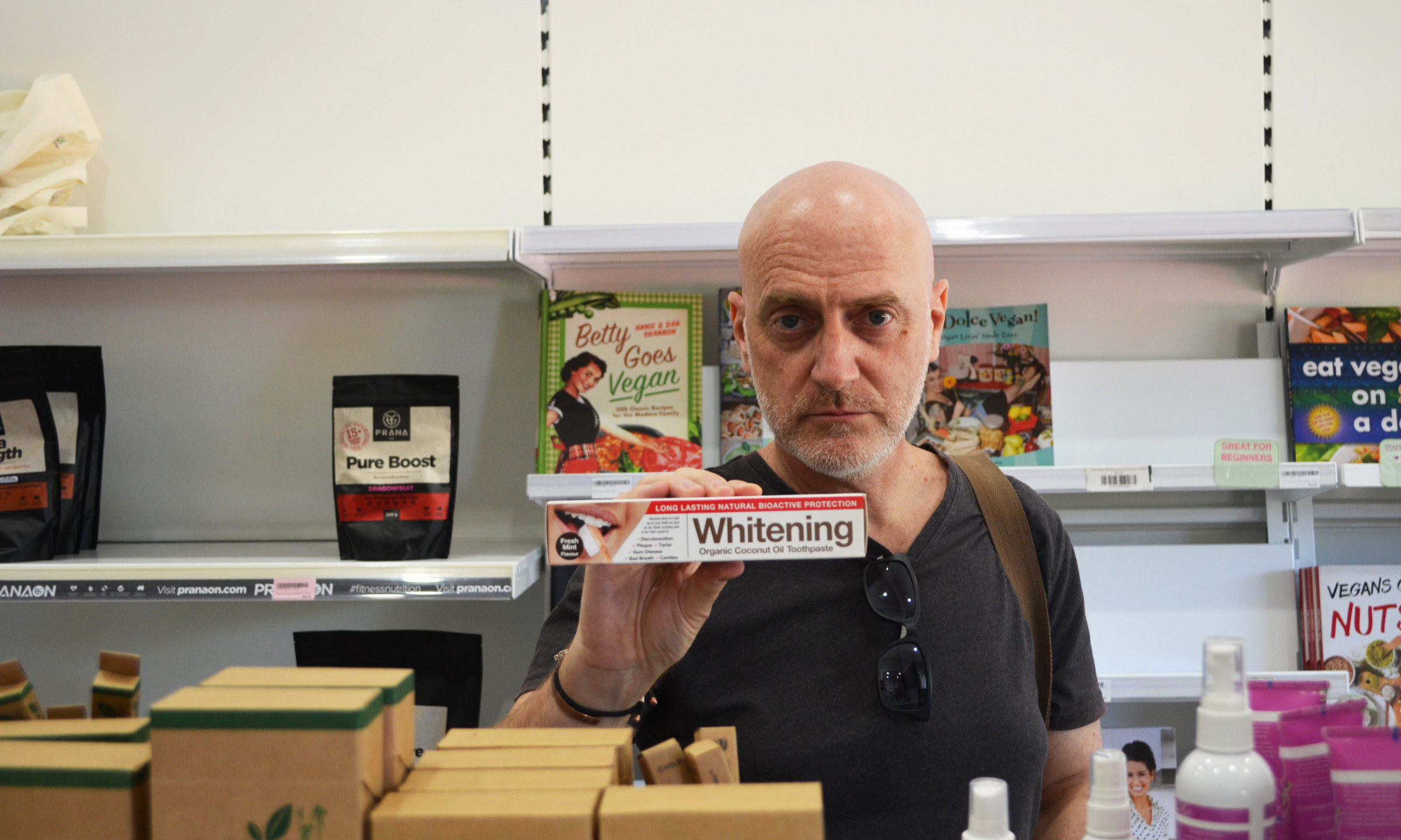 He prefers buying bespoke items at Everything Vegan over larger chain stores as it gives him more range. “I would rather pay extra to have a choice.”

Vegan food sales in Australia have soared in the last half-decade, according to market research released last year.

Individuals leaning towards healthier and more ethical meals became visible by the growth of vegan cafés and restaurants cropping-up in the city, with larger fast food companies, like Hungry Jacks and McDonalds, following suit.

While Everything Vegan rode this wave for a period, it came to a staggering holt. Supermarket chains clapped back.

“We heard ‘I wonder if I could get this at my local supermarket’ all the time.”

National supermarket Woolworths stocks a range of plant-based items, such as brownies, cookies, mince and sausages, as well as its supermarket duopoly rival, Coles.

Woolworths told CityMag an increasing number of customers looked to incorporate vegan-friendly options into their diets and they met that demand. “This has driven double digit growth in demand for vegan products in the past year,” they said in a statement.

Coles also cited success among plant-based products, which has also ballooned “significantly” in the last 12 months.

“Coles has more than 1,000 Coles Own Brand products suitable for vegans to cater to this growing demand – from pantry staples like mayonnaise and salad dressing, to ice cream and desserts.”

The old stigma of being a vegan was being a hippie, being a tree-lover, a freak, but that’s changing

Kym believes the convenience and affordability of these products drove customers away from Everything Vegan.

While she is saddened by customers no longer supporting her small business, the pain is mitigated by the growth in veganism.

“The old stigma of being a vegan was being a hippie, being a tree-lover, a freak, but that’s changing,” Kym says.

“I think it’s good because it is getting that mainstream attention, and at the end of the day that’s what we want.”

Although Everything Vegan’s legacy will finish, Kym’s work as an animal-rights activist won’t.

She runs not-for-profit charity Freedom Hill Sanctuary in the Adelaide Hills, which provides “a loving home to neglected and abandoned farm animals” off the back of the profits from Everything Vegan.

Now that her shop is due to end trading, she’s looking for fundraising elsewhere.

“When one door closes another door opens,” Kym says.

Although the end is in sight, Kym remembers the early days of Everything Vegan. She was the first place in South Australia to offer soft-serve ice-cream from a machine, she says, and she helped convince a pizzeria to offer options for those abstaining from animal products.

“It was Papamia’s, years ago, that did the first vegan pizza,” she recalls.

“He was the very first to venture out in Adelaide.

“The owner would come in and say ‘what else do vegans like’? and I would say a barbecue chicken would be amazing, and a seafood.

“’Do everything normal but give it a vegan version and it will sell,’ I said to him. He was run off his feet when he started.” 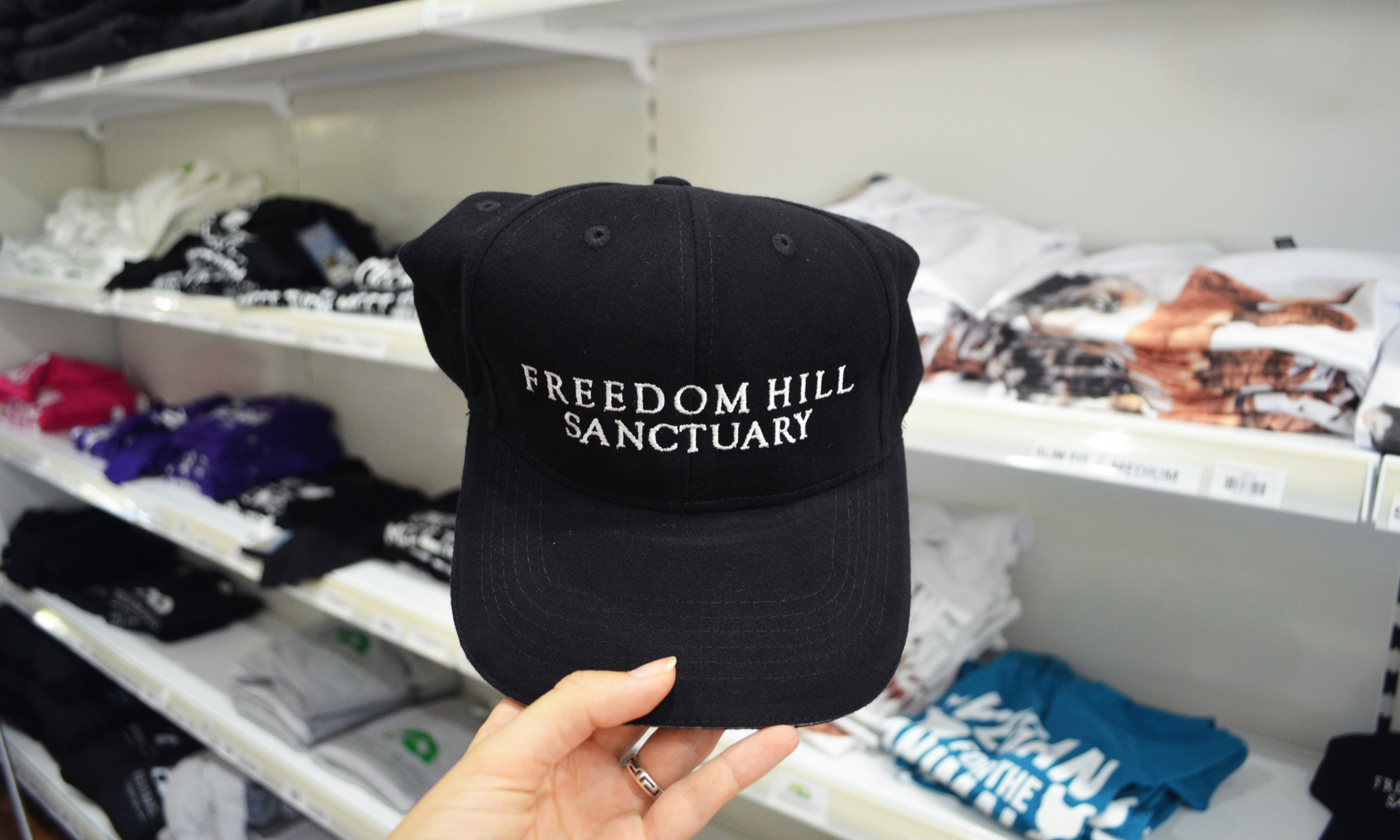 All the profits from Everything Vegan were funnelled into the animal sanctuary. You can make donations, sponsor an animal or buy merchandise by visiting their website here or visit Everything Vegan before they close.