With reports of increased domestic and family violence during COVID-19, State and Federal governments have funded a new approach in South Australia to stem the problem: accommodating and counselling men before they become violent. 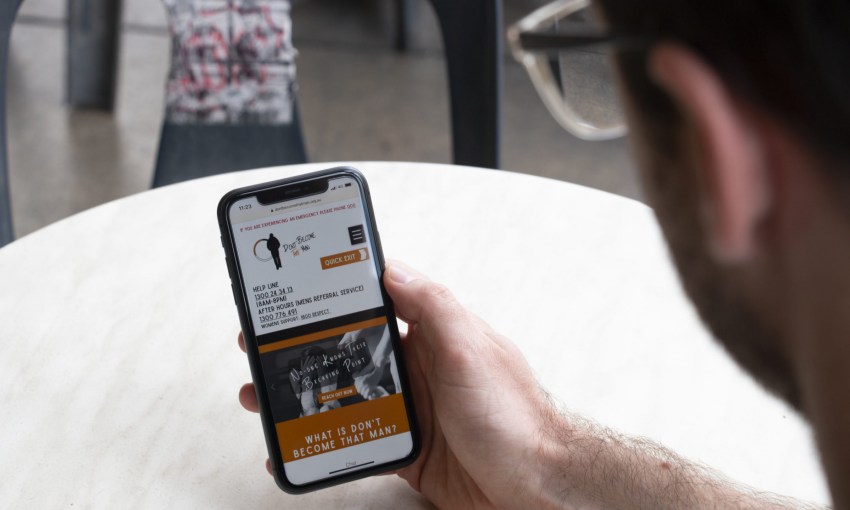 Contact the program’s confidential helpline: 1300 24 34 13
Crisis accommodation can be reached via phone.

“It is really important to protect women by having accommodation and support for them, but the argument is that you don’t stop men being violent against women by taking women away – you stop the outcome of that,” he says.

“Everyone that we speak to, including the women’s safety services to State Government, says we have to stop domestic violence at its cause.”

In July this year, The Australian Institute of Criminology released a report based off an online survey of 15,000 Australian women, conducted in May.

The report found two-thirds of the survey’s respondents who had experienced physical or sexual violence by a current of former cohabiting partner since the start of the COVID-19 pandemic said the violence had started or escalated in the three months prior to the survey.

Also in July, the State and Federal governments announced they would pump $660,000 into Community Transitions, with the aim to jump-start a six-month pilot program of a new approach to addressing family and domestic violence, called Don’t Become That Man.

The initiative flips how the state treats perpetrators of family and domestic violence. Instead of punishing those who commit crimes after the fact, Don’t Become That Man offers over-the-phone counselling services and nine crisis accommodation beds for men who recognise they’re exhibiting behaviours which could precede a violent or dangerous event.

The aim is to bring men into the rehabilitation process before an incident occurs.

“If you don’t intervene in the cause then… nothing will change.”

South Australian Minister for Human Services Michelle Lensink says the Don’t Become That Man trial is the first of its kind in South Australia, and Assistant Minister for Domestic and Family Violence Prevention Carolyn Power says the results will inform future policy.

CityMag visit the Community Transitions office three weeks after the launch of Don’t Become That Man. There are two men currently sleeping in beds. Community Transitions Deputy CEO Louise Kelley says they’re doing well, and are engaging in phone counselling and working with their case managers.

Two months before this visit, the Australia Bureau of Statistics released their most up-to-date data on victims of family and domestic violence. According to the data last year there were 125 victims of domestic violence, two-thirds of which were female.

More than half of the victims from that 2019 ABS data were murdered. That means, on average, one woman a week is killed by her intimate partner.

Prominent news coverage of the deadly outcomes of domestic violence will often prompt men who consider themselves at risk of harmful behaviours into seeking support, Leigh says.

“Some time ago, there was a really, significantly bad incident in Queensland where a father burnt his kids and his partner to death and then committed suicide,” he says.

“We created Don’t Become That Man, and it’s designed to target men who are controlling and for whom the next step might be some violence or even lethal violence against their intimate partner.”

Instead of having a coercive system that sits over the top, we’re trying to engage and change behaviour
– Leigh Garrett 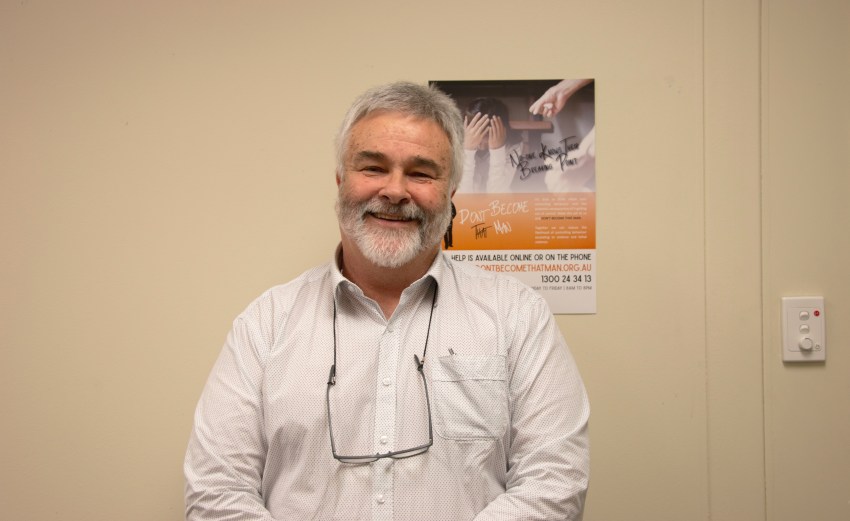 “We’re also going to be launching a bit of a self-assessment tool for men,” Louise adds.

“The message that needs to get out there [is] that domestic violence isn’t just physical.”

Through Don’t Become That Man, men are able to access crisis accomodation, and can stay for a month. There will be an assessment to make sure they are appropriate for the program, and, once housed, the man is not then forced to stay, Leigh says.

“Instead of having a coercive system that sits over the top, we’re trying to engage and change behaviour, through education, awareness-raising, and voluntarily moving into a different world,” Leigh says.

“What we’re trying to achieve here is stop the behaviour before it gets violent and becomes a criminal justice system matter.”

When you start to see men addressing other men in a respectful yet challenging way… that’s important.
—Matthew Mabarrack 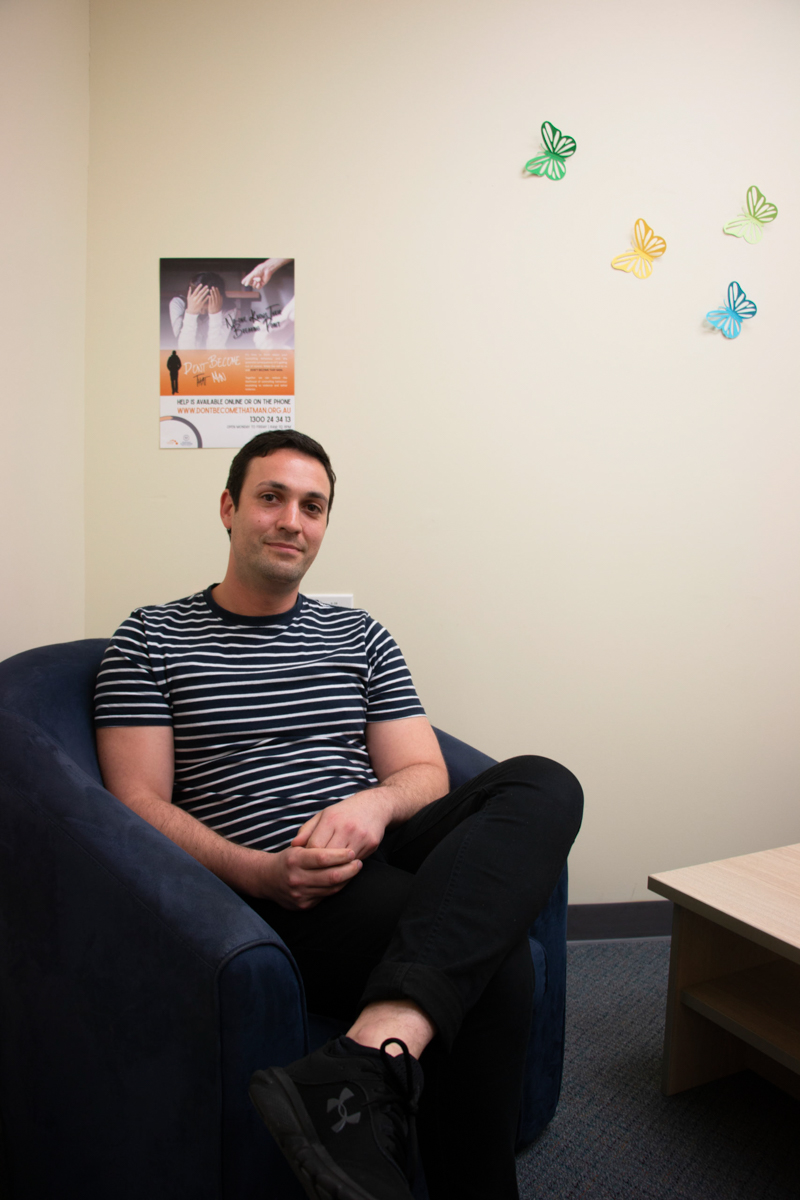 Matthew Mabarrack is an intervention counsellor and has worked for Community Transitions for two years. He helps men identify when they’re being abusive or controlling in their relationships, and handles up to 15 cases at a time.

A day in the working life of Matthew is taking calls from men who’ve heard of the service, following up with intervention strategies, or case-conferencing with men who have partners.

He says the people he speaks to are open to making changes, and that’s why the program works.

“Don’t Become That Man identifies that, for some, it may have been their story in the past, but it doesn’t have to be in their future,” Matthew says.

“The onus is on the man to make accountable steps, to change his behaviour for the safety of everyone.”

Matthew has learned from his two years with Community Transitions that change is possible.

“When you start to see men addressing other men in a respectful yet challenging way, for things like gender norms [or] ways that you might address a female, and you start seeing people put words into actions, that’s important,” he says.

The success of Don’t Become That Man will be determined by ongoing assessments of participants and how many users engage in the service.