P.Johnson Tailors brought their Trunk Show to Adelaide recently, measuring up local men for handsome hand-made suits. We sat down with founder Patrick to learn how he went from studying winemaking in Adelaide to making suits in London and eventually running his own business. 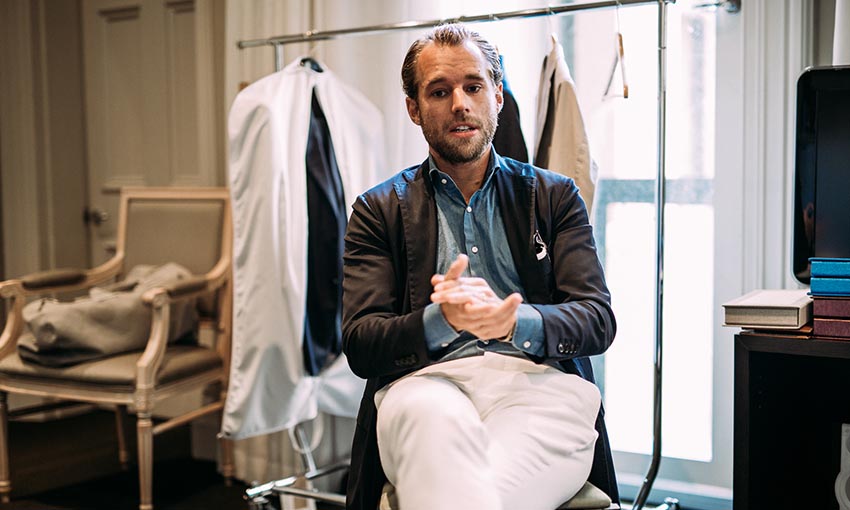 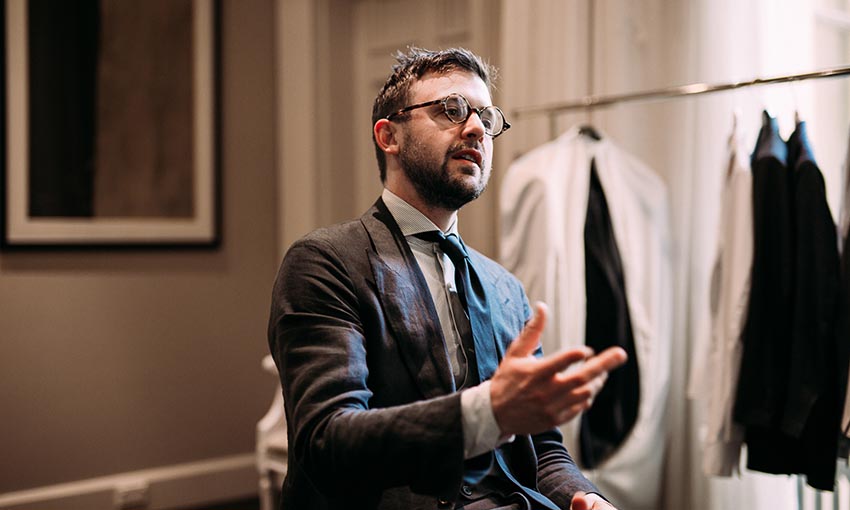 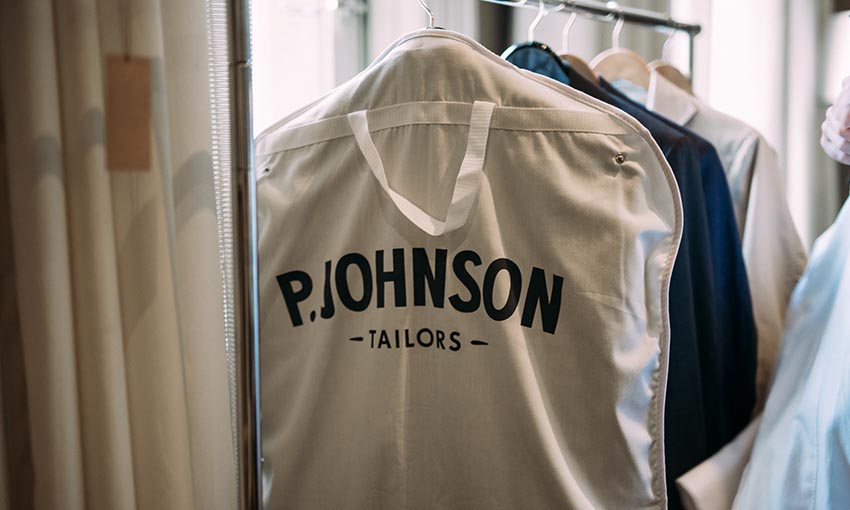 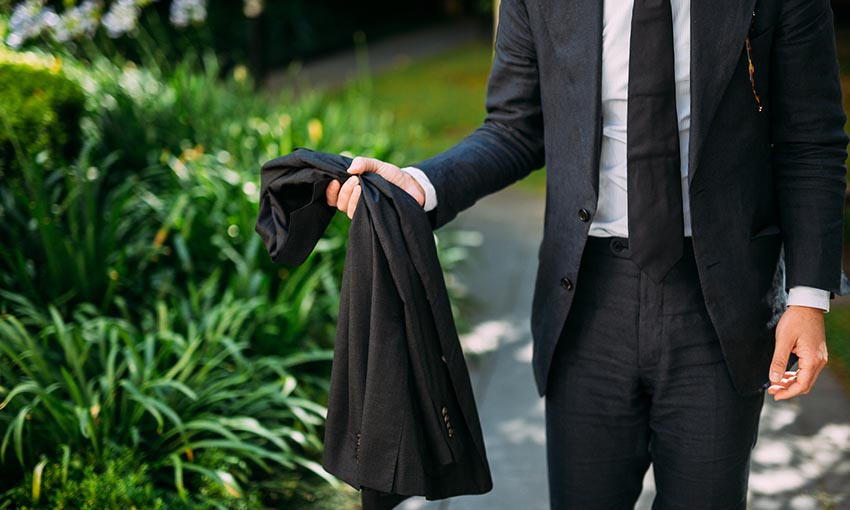 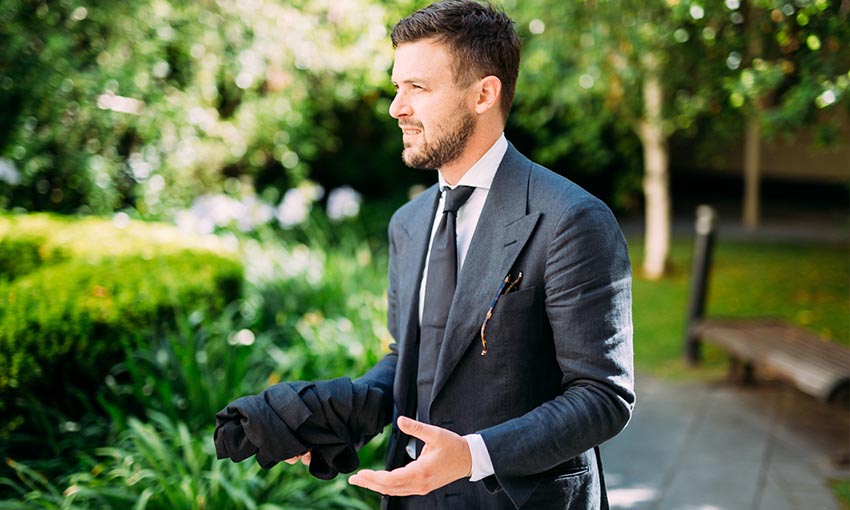 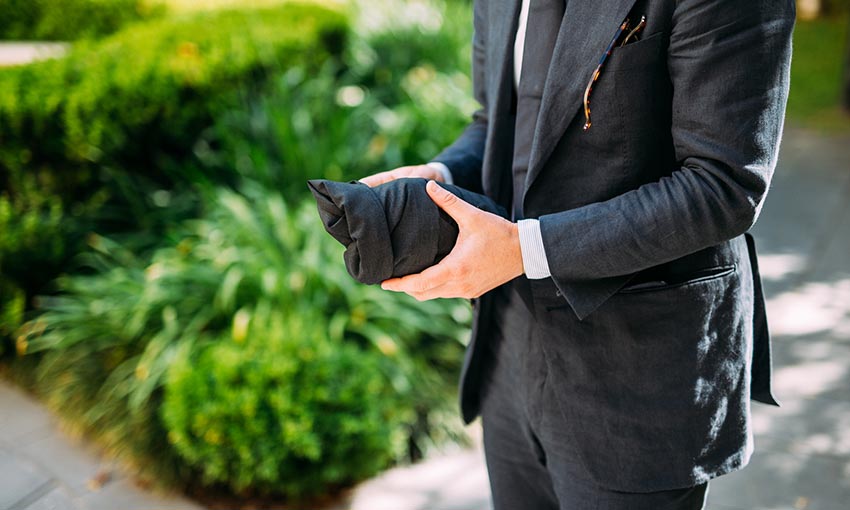 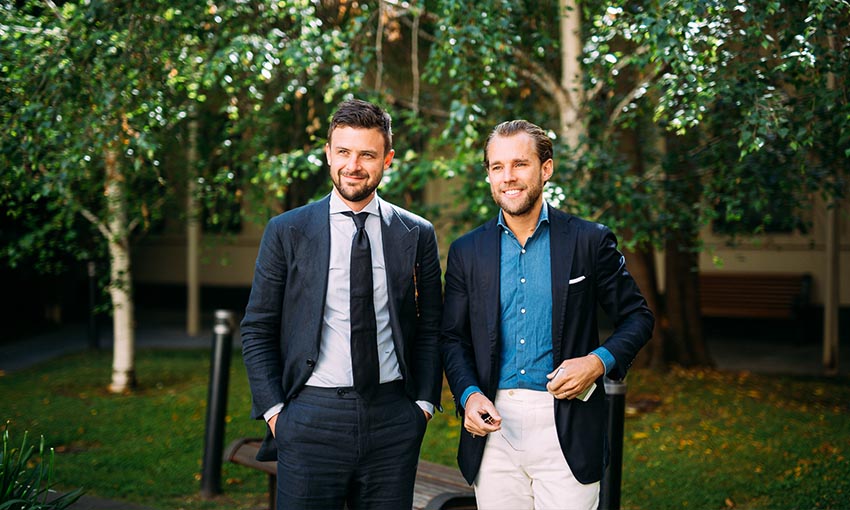 CityMag first met Patrick Johnson on a trip to Sydney some years ago. He was recommended as someone who we might write about, but he stuck with us as someone we enjoyed talking to.

P.Johnson Tailors put on Trunk Shows (custom consults) throughout the year. Email them to find out more or book an appointment next time they’re in town.

A South Australian, Patrick graduated from the University of Adelaide’s winemaking degree (Oenology) then quickly disappeared to France. Flitting around the world, he took very little from his home town while he travelled – but one thing he never lost was a strong friendship with fellow Adelaidean Tom Riley, who is now his business partner.

This morning the pair are sitting in a well appointed and thickly-carpeted hotel room at The Treasury on the corner of Flinders and King William Streets. Patrick and Tom retrace the steps that lead them around the globe, to their base in Sydney and now back to Adelaide – albeit for a short trip.

“Going to school in Adelaide and growing up here, I think you learn how to be well-mannered, which is one thing,” says Patrick. “I think what Adelaide has, which is really lovely, is there’s no flashiness – there’s no pretension.”

Patrick looks up to the ceiling seemingly counting through something in his mind.

“We employ quite a few Adelaide people in Sydney and Melbourne. No matter where they come from [in SA] they’re generally pretty polite, really nice attitude, work hard, don’t complain too much – which is sort of an Australian, overall, characteristic but I think it is especially true of Adelaide, which is one thing I really like.”

Tom Riley’s a prime example. Before Patrick sat down for our interview he was on the phone to the Financial Review, so Tom explained to us his part in the business. Like Patrick, he too completed a degree in winemaking before being lured into the world of tailoring.

“We were best mates,” says Tom. “When Patrick was working for Robert Emmet in London I’d visit him at least once a year. Often he was too busy to take time off and so I just used to go to work with him and learn from him about tailoring.”

When Pat returned from the UK with the intention of establishing the tailoring business Tom was just about finished with the wine industry.

“I was still very passionate about wine and wanted to make wine but I didn’t really see my future in it,” says Tom who now acts as head tailor for the company and oversees product quality, innovation and staff training.

While the business is based in Australia, travel is a key component of its success. Patrick and Tom make regular trips to the US (every five weeks or so) and other global centres for client fittings.

“Travel is extremely important to the business, and for a number of reasons,” says Patrick. “It expands your knowledge and experience base, aesthetically it lets you know what’s going on everywhere and it’s exciting. It also makes you realise what’s good about Australia. What we have that’s good. I’m on a plane every week until the end of the year and it just makes me realise how much I like coming back here.”

Patrick’s last 10 days saw him working between Rome, Shanghai and Hong Kong. His lightning-quick trips see him immersed in different cultures and experiences over a few short days in each location.

“You just see what’s going on over there and then you’re not intimidated by it all, but to know what’s going on… it’s kind of essential,” says Patrick.

“You have to surround yourself with good people, it’s important because none of us know what we’re doing.”

The other essential, says Patrick, is surrounding yourself with good mentors. While happy with the education he got from Central Saint Martins (world-renowned art and design college in London), Patrick says it pales in comparison to what he learnt on the job from shirt maker, Robert Emmett. Robert recently flew to Rome to surprise Patrick and the two have weekly phone calls.

“When I first came back to Australia in 2008 I recognised the need to have good mentoring. One of our first clients – a guy called Pitzy Folk (who just sold Map Coffee and currently owns CAPI soft drinks), an amazing guy – I just sort of said to him, ‘I know this sounds a bit weird but would you be open to catching up with me once a month in a bit of a mentoring role?’ and he said, ‘sure – I’d love to’.”

Patrick now seeks advice from numerous professionals on all aspects of the business.

“You have to surround yourself with good people, it’s important because none of us know what we’re doing. Anyone that thinks they know what they’re doing is lying – you give it a go, see if this path works and if it doesn’t you correct and go on a different path,” says Patrick.

“The other point is that this sort of business isn’t a thing. The tailoring and the way we’re doing it. We don’t like doing what’s done before because that’s boring, that’s copying and it’s been done before. You want to do new and fresh stuff and be true to what you like.”

Patrick goes on to prove his point about doing things differently, saying that quite often he talks his clients into buying less and getting them to acknowledge that they’re not going to wear 10 suits. It’s a strange business model but it’s working and the product itself is astounding.

Completing the interview, though we could have chatted for another hour, Tom quickly shows us their latest shirt jacket design. Almost structureless, the jacket has no lining and simply rolls up into almost nothing – perfect for travel. A quick snap of the writst and the jacket shakes out back to its original intended form with the creases falling out.

It’s an incredible jacket. Stylish and light weight, durable and dependable – good for Australian conditions and made by a couple of exceptional Adelaideans.