As Renew Adelaide prepares to launch a string of new shops in Topham Mall this evening, we catch up with the guy responsible for making the mall itself look a little more inviting. Meet Matt Stuckey, designer, doer and all 'round friendly chap. 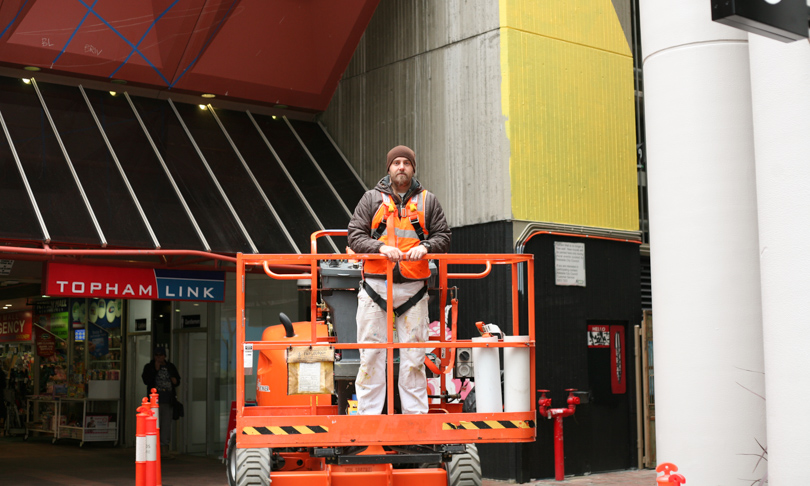 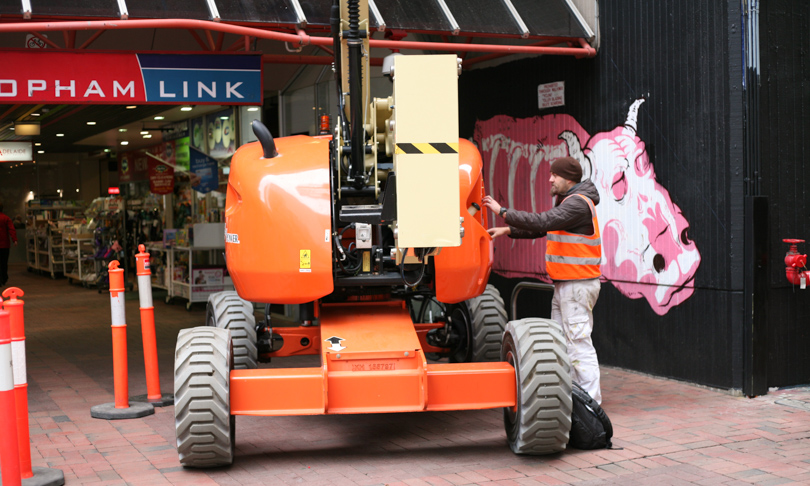 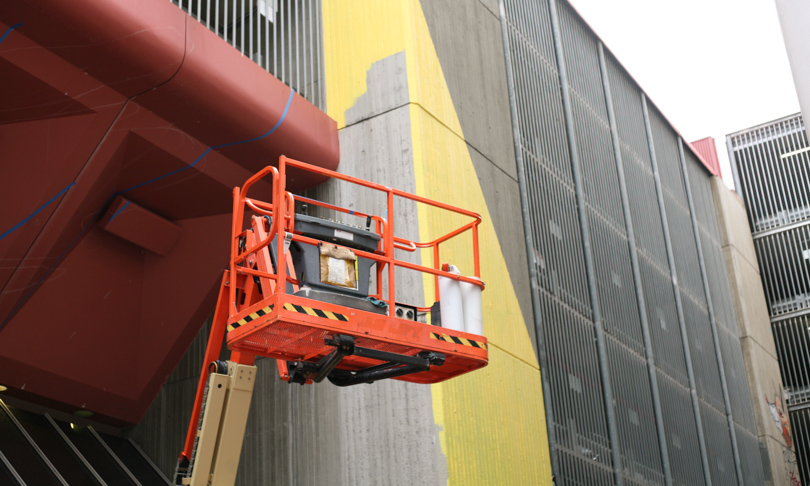 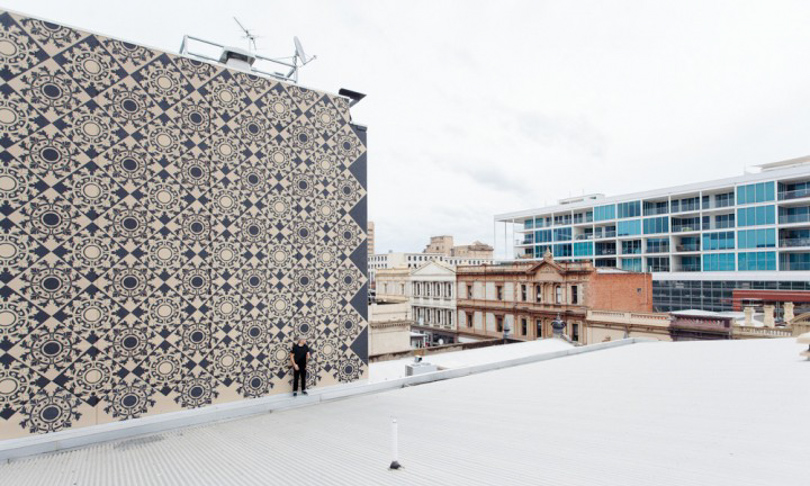 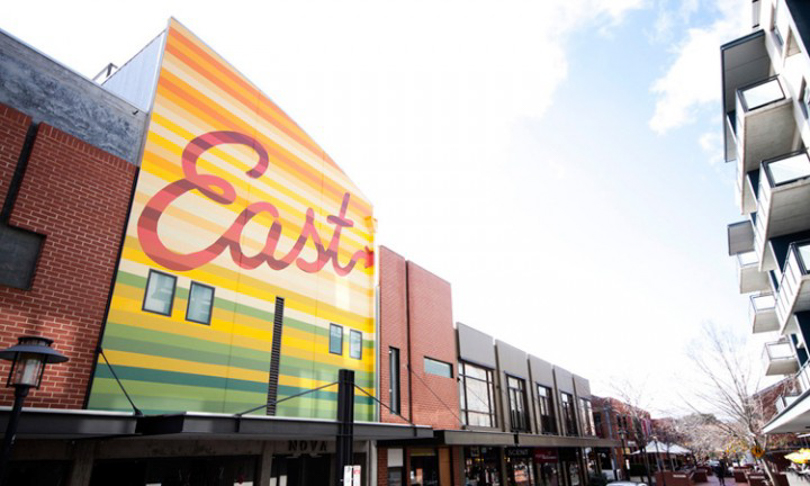 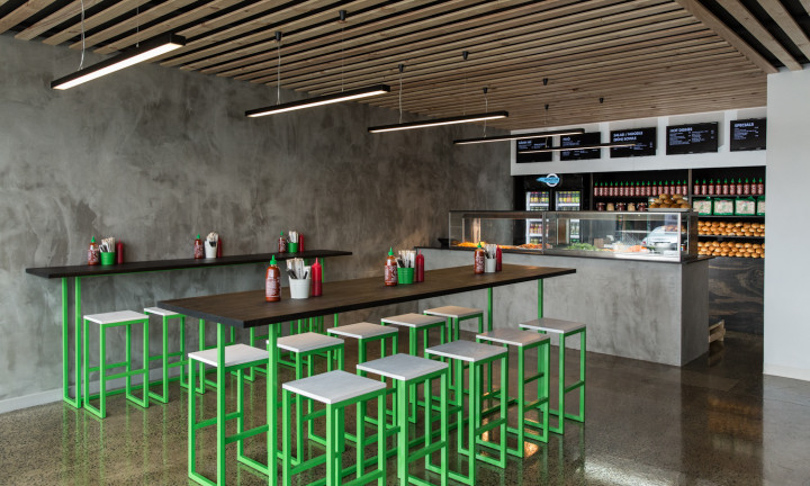 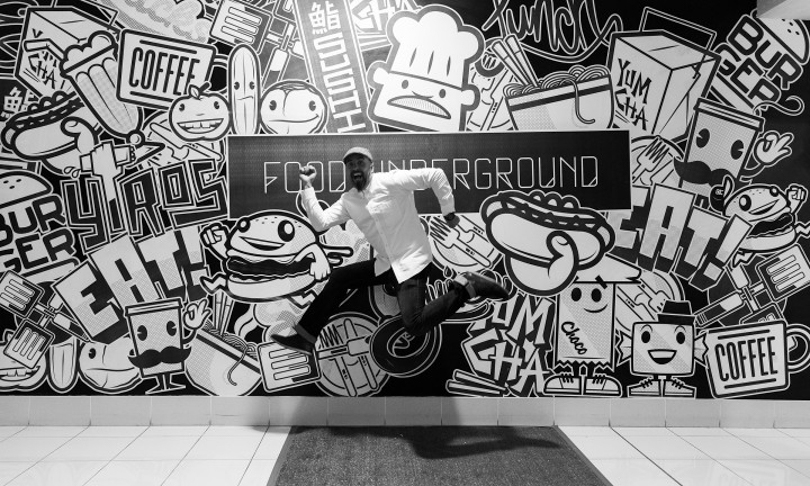 When you start out studying illustration, becoming a painter doesn’t seem too far removed. However, when you need to wear high-vis and have a (literal) license to perform high risk work, your job deserves some further inspection.

Matt Stuckey is the owner and director of Be Friendly – a multidisciplinary creative agency  that specialises in 2D and 3D design. See more of their excellent work here.

Matt Stuckey of Be Friendly has been making art his whole life but is likely familiar to you for his large-scale artworks dotted across the city (and pictured above).

Matt’s love of drawing led him to study Visual Communications at UniSA, however UniSA wasn’t quite ready for him.

“On the first day of university we (our class) rocked up to the City West campus as per the instructions and there wasn’t a lecture room or a tutorial room for us,” says Matt – still bewildered.

Part of the inaugural VisCom graduating class of 1999, Matt was just 19 when he received his parchment. However, it wouldn’t be until he was 21 that he landed his first professional job with toy maker and textile designer, Happy House.

“I worked so hard for that first job,” says Matt. “It was one of those amazing occasions where someone was advertising for an illustrator in the newspaper and I didn’t want to just submit a portfolio like everyone else.”

Instead, the hopeful contender created a Mr Men sized book filled with illustrations that conveyed his qualifications and how great it would be if Happy House had him around. And if that wasn’t enough he then painted a picture of himself instead of a cover letter and delivered it in-person.

Safe to say, the effort was not overlooked and Matt got an interview.

An interview, but not the job.

Naomi Murrell (of several CityMag features fame) got the advertised position. However, it seems Matt’s charm did not wash out because two days later Happy House called and asked whether he had been employed since their last meeting and whether he would like a job.

Barely stifling his laughter, Matt accepted the opportunity and took up a custom-created roll for him as part illustrator, part assistant to the boss.

That first job was transformative for the aspiring illustrator. Matt made senior designer by the age of 23 and was also using his passion for architecture in creating 3D elevations. The elevations were of children’s toys but they were elevations none-the-less.

“In high school I wanted to either be an artist or an architect,” says Matt. “But the career counsellor assured me that architecture was maths-heavy and so I chose art. I’ve since learnt from and met many architects who’ve told me maths isn’t their strength.”

But, the idea of affecting the built environment and making an impact on Adelaide has never left the artist. Curiously, it was whilst in Tokyo Matt fully realised this.

“A clip on YouTube blew up, while I was there,” explains Matt. “It was by a group of artists called Rinpa Eshidan and it was sped-up footage of them painting and re-paininting a wall with different artworks for a full week. It got one million views in the first week and I just contacted them to get involved,” says Matt.

The experience of contributing to the group and making art-on-the-fly helped Matt to think about Adelaide and while he was sure there wasn’t the same audience here that was coming out at 2AM to check out the latest 48-hour art marathon, he hoped to increase his hometown’s awareness of art and its transformative effect on the environment.

“There are a lot of bad buildings in Adelaide,” says Matt matter-of-factly. “There are ugly streets and uninspiring places and I have a drive to change that.”

Matt considered returning to university, getting his masters of architecture then starting a new career where, perhaps 15 years down the track he might be able to affect change on the city he loved.

“Instead, I just learnt to paint bigger,” he says.

Matt’s first public commission was commissioned by himself. He asked property developers – the Maras Group to use their vacant wall (where Burger theory is now) as a blank canvas. The artwork by he and fellow artist, Joel van der Knaap was well received. So much so that Maras Group have continued to strengthen their relationship with Matt’s business – Be Friendly.

It was the Maras Group who actually paid for Matt to get his “License to perform high risk work – Class EP” in order to create his iconic “East” artwork above Ebenezer Place.

The East project was pivotal in Matt’s career he says.

“It was my first project in a cherry picker and it was the first time I used blue tape,” he says.

If you’re not quite sure why blue tape is so important then take a walk through Topham Mall. On the south side, adjacent Kangkong you’ll see an artwork in-progress, punctuated by sharply divided colours in a geometric fashion.

Those clean, straight edges that so typify Matt’s practice are all thanks to blue tape.

But shhhhh – don’t tell anyone.