Good cheese and a good company

How the search for some top-notch cheese and bread gave rise to the business behind Say Cheese, Smelly Cheese, Market St café, Dough, and more.

Valerie Henbest and her partner Peter Heaney didn’t intend to build an interconnected group of businesses that employs more than 120 people and does trade all across Australia.

They just wanted to eat, and sell, a little bit of good cheese.

Valerie was born in Normandie, France,  and about 25 years ago she immigrated to Australia. 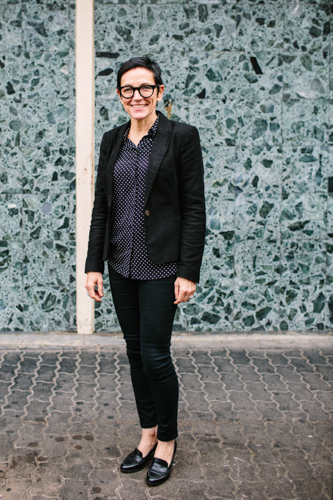 “When I first came to Australia I loved it here, really loved it, it was – I sort of thought – what have I been doing with my whole life away from this place,” she says.

Valerie went on a search for some proper cheese, and in the process she found Peter running a tiny little shop out of the Adelaide Central Markets called Say Cheese.

“I don’t know if I was attracted to him, or the cheese, but in the end it is one and the same,” Valerie says with a laugh.

Ever since then – Valerie, who studied film before moving to Australia – has been swept up into the cheese business.

Between her and Peter, they have grown the business from one small shop into a group that incorporates three stalls in the Central Market (Dough, The Smelly Cheese Shop, Say Cheese), a local and interstate cheese wholesale business, the Market St. café, and an outlet at Westlakes called Cheese Co. 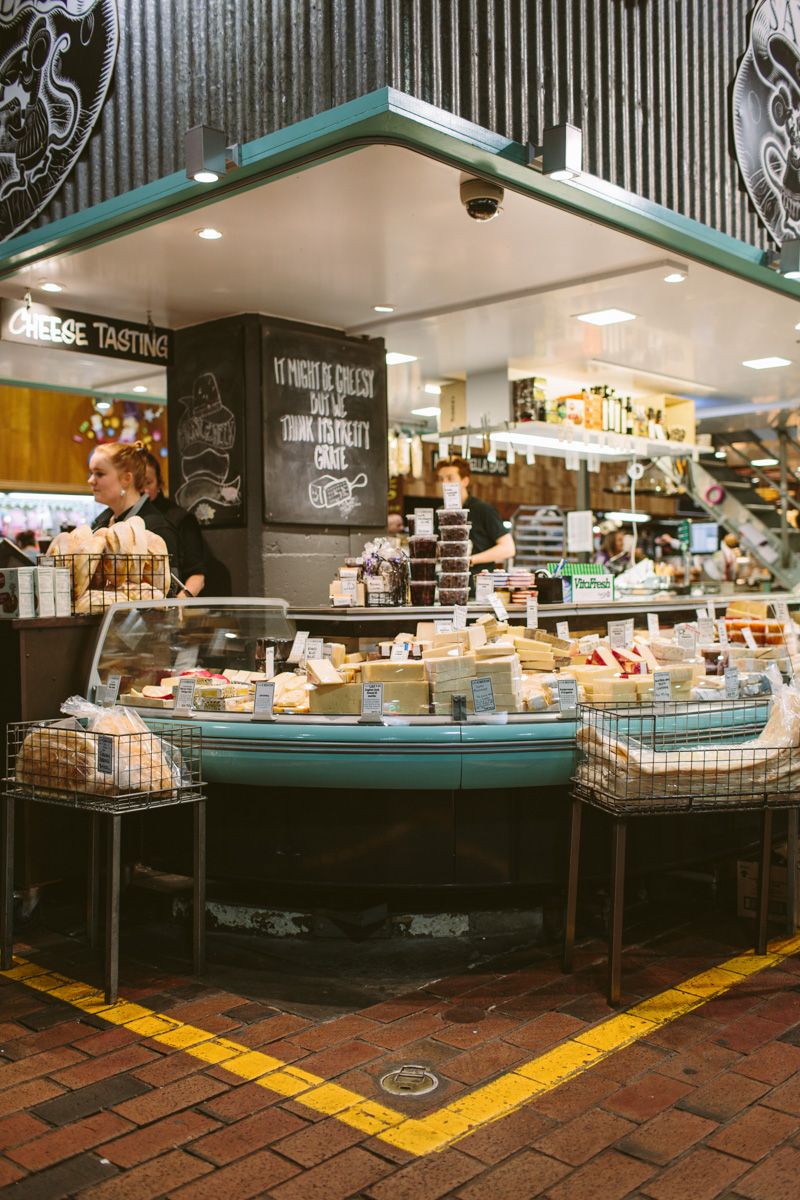 The growth and diversification though, says Valerie, has been organic – not strategic.

“It’s been a natural expansion,” she says. “Cheese, to start with, it cries out for bread. So bread was a no brainer, so we create the bread offer in Dough.

“Opening Smelly was an opportunity for us to use Smelly as the high end range, where you have a lot more imported product and you have a real encounter with a cheese monger at the counter.”

The wholesale business too, was a demand-driven offshoot. 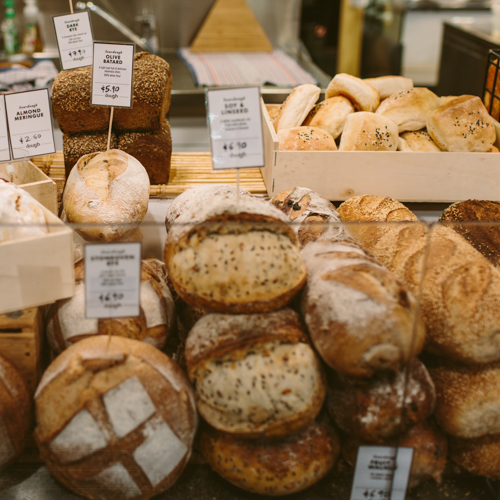 “Cheese, to start with – it cries out for bread.”

It started early in South Australia, with chefs beginning to ask Peter for the service when he was still running just Say Cheese. Wholesale expanded interstate in 2007 when Valerie launched The Smelly Cheese Club – an online outpost of the Market stall. Chefs outside of SA got a look at the cheese and wanted it too.

“But unlike other people who might have thought, ‘oh, we want to open an office in Melbourne or Sydney’, we thought, no – we want to control quality,” says Valerie.

“Cheese is such a specific product that you really need to understand it and to know how to treat it. So we decided to centralise everything in Adelaide, so all the people who understand the cheese very well are here.

Market St. café was also a practical rather than tactical addition to Valerie and Peter’s portfolio. The bakery, Dough, had a growing product range and growing demand, but the space in their existing Chinatown baking facility was not growing.

“The poor bakers were really working in this tiny little space. So we were looking for a bigger space near the market, looking, looking, and this space came up. It used to be Wilson’s Organics,” says Valerie.

“And when we looked at that, it sort of looked amazing – it has this big room at the back there which we totally gutted and fitted with European ovens and, so, in terms of baking technology we are really up to scratch now.

“But we had this front so we, ah – we fill it. But funnily enough, really everything fell into place because we have the cheese, the patisserie there are very happy to expand the range, and the coffee is a very easy addition, we partner with Tony D’Angelo who did a nice special blend for us.”

While the expansion has undoubtedly been organic, driven by Peter and Valerie reacting to circumstances as they emerge, it is undeniable that each change in the business has been underpinned by a common factor – demand.

And the kind of demand that allows a business to grow and branch out like Say Cheese needs to be fostered, particularly when you’re dealing with a market full of options. Peter and Valerie, after all, are not the only importers of good cheese or makers of excellent bread in Australia.

So, without having exclusivity to fall back on, the couple have built demand using a few key ways of doing business better.

The first difference is the way Valerie, Peter and their team handle their core product – cheese.

“You can kill cheese quicker than you can say, ‘Bob’s your uncle’,” says Valerie. 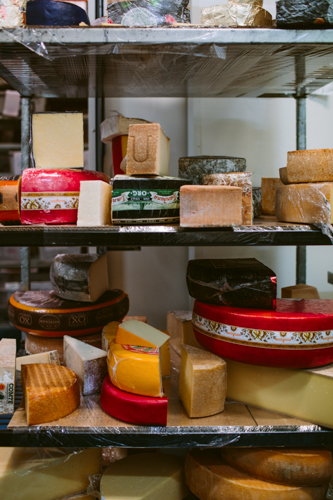 Valerie and Peter spare no expense in making sure their imported products arrive in Australia – either by air or by sea, whichever is more appropriate – without being exposed to any of that.

Once the cheese has landed or made port, the facilities at the Smelly Cheese warehouse on Wright Street are second to none.

“We have cheese from all over the world, but mainly Australia arrive every week,” says Valerie. “From Europe every two weeks we have over a tonne and a half come in by air – that leaves Paris on a Monday and is here on a Wednesday.

“And every month we have a big sea shipment that comes with around six tonnes.”

The shipments are greeted by Sam Sibley – the group’s affineur, whose job it is to look after cheese while it matures.

Additionally, special products are put into the maturing room. This room is a rarity in Australia – there are only a handful like it – and it is engineered to keep cheeses in perfect condition.

“This room is the optimum temperature, it is around 10 degrees, which is a good temperature, but more importantly it’s around 96-98 per cent humidity in here,” says Valerie.

“This design means the air is rotating naturally – not fan-forced. The cheese is releasing gas – you smell ammonia mainly, and there is lots of other gas, and it sort of rotates through.

“In many ways we are slowing the aging – it’s aging gracefully.”

The rarefied conditions Valerie and Peter provide for the cheese helps them with another of their points of difference – their strong international relationships.

Every year, Valerie spends time travelling across Europe and America, finding new cheeses to bring back, and revisiting cheesemakers she has known for a long time.

“I have the right accent that when I meet someone and I ask, ‘can you sell me the cheese?’, they say, ‘oui, oui, where do you take my cheese?’,” says Valerie.

“And when I say Australia, they say, you’re crazy, it’s too hot! It’s upside down! So, I have to tell them I know how to look after their cheese. It really needed all that to make them go, ‘ok, let’s try’.”

But thanks to these reassurances, Valerie and Peter have been able to make deep and lasting relationships with suppliers. And sometimes those partnerships result in special one-off or exclusive cheeses.

“We have a particular connection with Hervé Mons from France. And we do have lots of amazing product that we only carry,” says Valerie.

Valerie and Peter are keen to foster and develop Australian cheese-making culture because of a genuine love for local artisans, and they are also aware that importing tonnes and tonnes of cheese is not environmentally ideal.

They’re looking toward a more sustainable future, and that means developing a thriving Australian cheese culture.

“Recently, we did this little coulommiers with truffle in the middle that has been done especially for us.”

These close working relationships also create extra development opportunities for staff – and good staff is another important asset at the heart of Valerie and Peter’s success.

Valerie is working on the idea of a cheese monger swap – sending staff from the Adelaide operations to work in friendly cheese stores in Paris, London, Normandie, New York, wherever, and hosting the staff of those stores reciprocally.

Already, Sam the affineur has spent time working with Hervé Mons in France to improve his skills.

For Valerie, staff development of this kind is crucial because it is the staff who help customers understand, and eventually love, their products.

“Working with cheese is not a skill a lot of people have so when we have good people we want to keep them,” she says. “So we want them to feel that they are very involved, very committed. 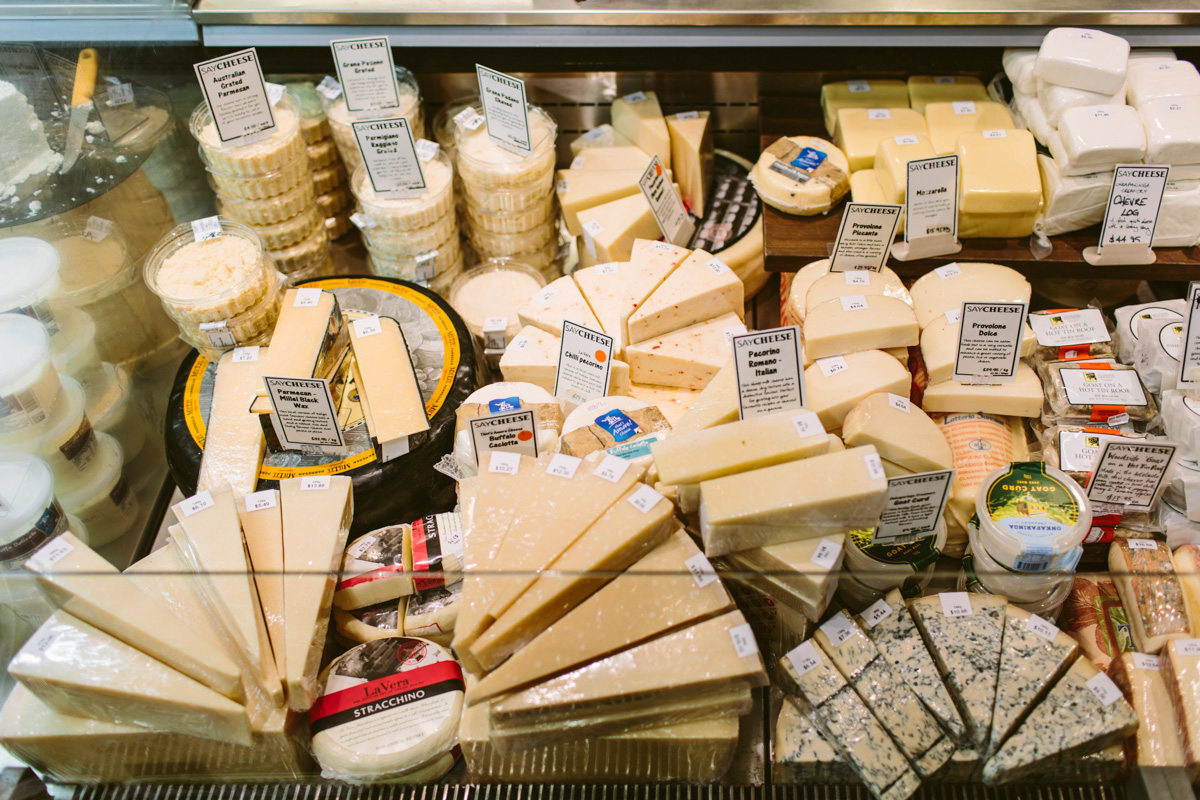 “At Smelly – the customer can engage, and you have a cheesemonger ask what kind of cheese you like, and you have the opportunity to expand on your tastebuds. You need to get outside your comfort zone, so it’s a good place to go if you are ready to do that.

“But the staff at Say Cheese, mind you, have knowledge of the Smelly product too so it can be a free-flowing thing. If they can see you have maybe matured and you’re ready they’ll show you something at Smelly and you realise, ok, maybe I can try that.”

The process of educating customers is also a key part of Valerie and Peter’s thriving cheese empire.

Encouraging people to step outside of the world of mass-produced cheddars is essential for Valerie’s livelihood, but she also genuinely enjoys sharing her passion for good cheese with everyone she meets.

A natural communicator, her cheese education classes that are held at either the Wright Street offices or in the Central Market after close often sell out.

“It’s extraordinary to be able to spend my life talking about something I love so much.”

“The Australian people are very keen to learn and they travel a lot – so they come back and they want to reproduce that,” says Valerie.

“As a result I feel like I am at the right place in the right time. It’s extraordinary to be able to spend my life talking about something I love so much and people listening and discovering something.”

They see their market retail spots as a testing ground they can use to help the emerging local scene to achieve the kind of global cheese excellence with which Smelly Cheese and Say Cheese customers are familiar.

“We can give them feedback on the product, but ultimately they need customer feedback and there is no better place than the Market to get customer feedback because we have customer service – we have people standing behind benches doing tastings, and we can pass that on to the producer straight away.

“So that dynamic retail is very important, not just for us but also for our producers.”

That attitude of sharing, of working not just for their own business but for the love of cheese more generally, is really what has built Valerie and Peter’s brands to this point.

And it’s an attitude that works perfectly with their product base too. Because cheese and bread are undoubtedly two things that work best when consumed in good company.