The future of podcasting will be Adelaide-made

Recently acquired by the biggest international names in podcasting – WNYC, WBEZ Chicago, NPR, and This American Life – Shifty Jelly are building the future of the entire industry. 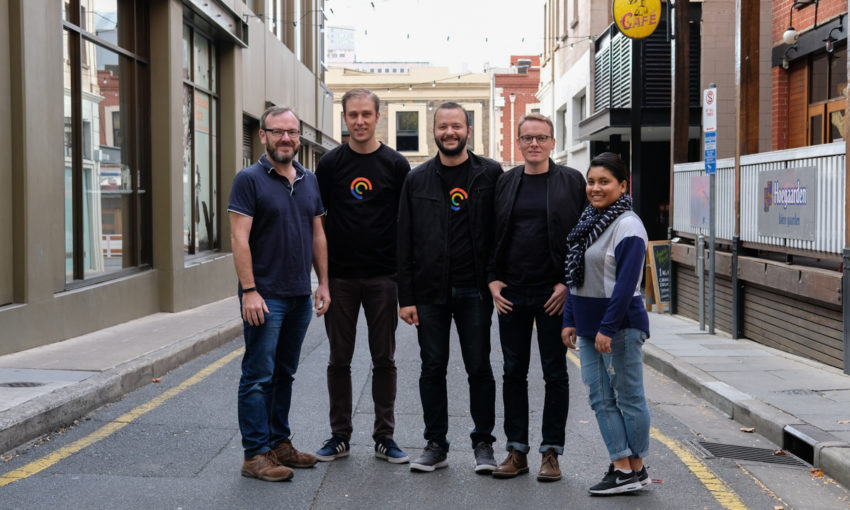 CityMag meets the Shifty Jelly team at their office above Burger Theory on Ebenezer Place. Weeks have passed since the announcement of their acquisition by four major US public radio companies, WNYC, WBEZ Chicago, NPR, and This American Life, and still there is not a single sign of Silicon Valley-style success to be found – no beanbag chairs, no foosball tables, not even a vocal CEO exhibiting delusions of grandeur.

If supporting local is your thing, Pocket Casts ($5.99) and Pocket Weather Australia ($2.99) are available where all good apps are sold.

The company was founded after Russell Ivanovic and Philip Simpson introduced a relatively simple solution to the underserved Australian weather-watching market in 2008, with Pocket Weather Australia.

“Australians are crazy about weather,” Russell says, and the information provided by Apple to its iPhone fleet at that time was often “five or six degrees off, and it told you it wasn’t raining when it was raining and stuff, so I thought why not just build a weather app?”

They used data available from the Bureau of Meteorology, packaged it nicely, priced it at $2.99, and a day after releasing it onto Apple’s App Store, it jumped to the top of the Apple’s app charts and stayed there for three weeks.

This success quickly took Shifty Jelly from side-hustle to full-time gig, and in 2010 they moved their focus to a second underserved market – podcasting.

“Back then [listening to podcasts] was really hard, right?” Russell says. “You had your iPod, and you had iTunes, and you had to go to iTunes, press refresh, press download, wait for it to download – because Australian internet – and make sure you remember to sync it to your iPod, and then get that into your car. It was just a huge pain.”

Their fix was Pocket Casts, a premium podcast platform targeting advanced podcast listeners, that, eight years later, would lead to four of the world’s most influential podcast creators buying out their entire company.

To some, this might sound ominous, but under the new entity, Podcast Media, Shifty Jelly will continue to develop Pocket Casts as they otherwise would have, except for the added requirement of board approval. Russell sees this partnership as a perfect fit.

“We’d met a few representatives, they introduced us to people from NPR, from WBEZ… and just meeting every single one of those people, and talking to the people under them as well, because they just wandered the office and talked to people and stuff, you really got the impression that they were very mission-driven, if that makes sense,” Russell says.

“They’re all not-for-profit organisations, and they’re all there because they believe in the value of content and journalism, and putting amazing stuff out into the world… and I think that drew us in more than anything else.”

Concerns around the integrity of the app being lost, now that it is effectively owned by content producers, are natural, Russell says, but “the actual structure of the company, and the reason they’ve set it up, is not to push their content.”

“Their tech teams are three-, four-, five-times the size of us. They have the ability to do all of that stuff already,” he says.

“What they’re looking for is for us to work on that other side of things that we’re talking about, so the discovery of everyone’s content, potential ways to monetise everyone’s content, because if we can make that successful and make that into an open standard, that benefits them as well as everyone else.”

There is a shared aim, in preserving the idyllic state of the medium and guarding against the encroaching threat of the ecosystem being taken over by a single entity.

“In the last two weeks, two different companies have got $40m of funding to create the Netflix of Podcasting,” Russell says.

“There’s a lot of money being pumped into the industry, and the people putting the money in are not doing it for the benefit of everyone, they’re trying to get a return on their investment, right? So they’re looking for the Netflix of Podcasting, which is one… privately held corporation actually controlling distribution for everybody, and I don’t know if that’s a good thing.

“The nice thing about podcasting is it is open. You could publish a podcast, and you don’t have to do content deals with 20 different distribution channels, it just goes out there.”

While initially, the team will be focussed on making the app more approachable to uninitiated podcast listeners, the long-term goals are in helping to make the process easier for podcast authors.

“One of the immediate things we want to do for them is help them promote their shows better,” Russell says.

“At the moment we have one discovery section that you can go to, and a lot of people go there in our app, but we just don’t have the resources to update that, to negotiate with thousands of authors and figure out which content we’re going to feature when, and which particular region. At the moment it’s just one page for the whole world, and it’d be cool to make that way better.

“And then the other side is the monetisation side – can we do something that’s not advertising that’s still really seamless for both the author and the listener at the same time. It’s not about being intrusive and being like ’Hey, you should pay for this show right now because it’s a great show,’ at the end of the show, but it’s finding some way to make that a pleasant experience.

“Until you solve that other side of things, then you’re not going to get more people into podcasting, even from the producer side… You’ve got to pay for all of [the] expenses somehow, so it would be really nice if there was a way to do that side of it.”

If the history of the Internet at large is any indication, the task of maturing podcasting to the point of being a viable publishing industry, without losing any of its more idyllic traits (the relatively unobtrusive ads and lack of an all-powerful gatekeeper, for example) will be very, very difficult.

But there is a humble, and perhaps idealistic, team working to solve this problem, and if we’re lucky, the future of the podcasting industry will be built right here in Adelaide.