What began in the ‘70s as a guitar repair shop run by Peter Vitek alone has become a 40-year project of servicing the evolving needs of Adelaide’s professional music-making community. 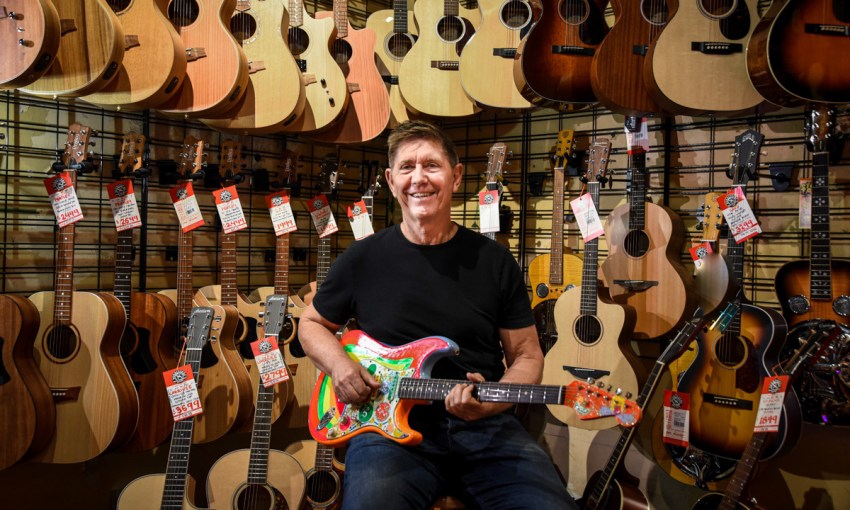 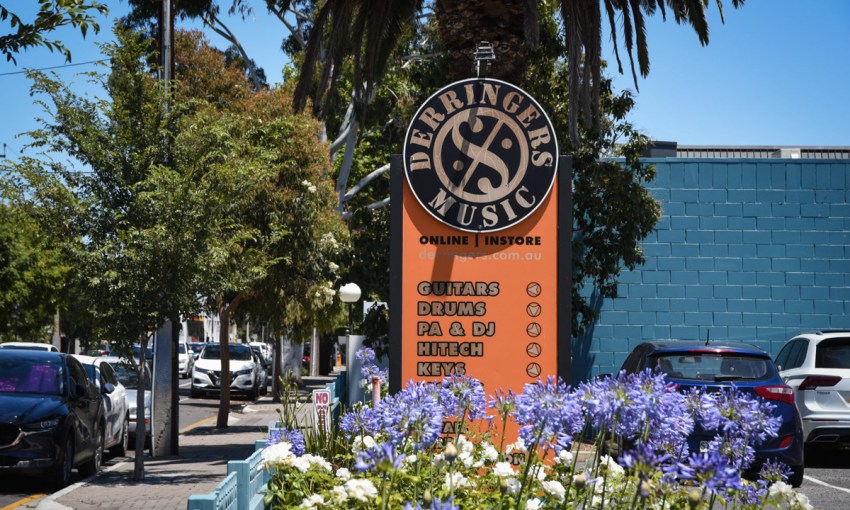 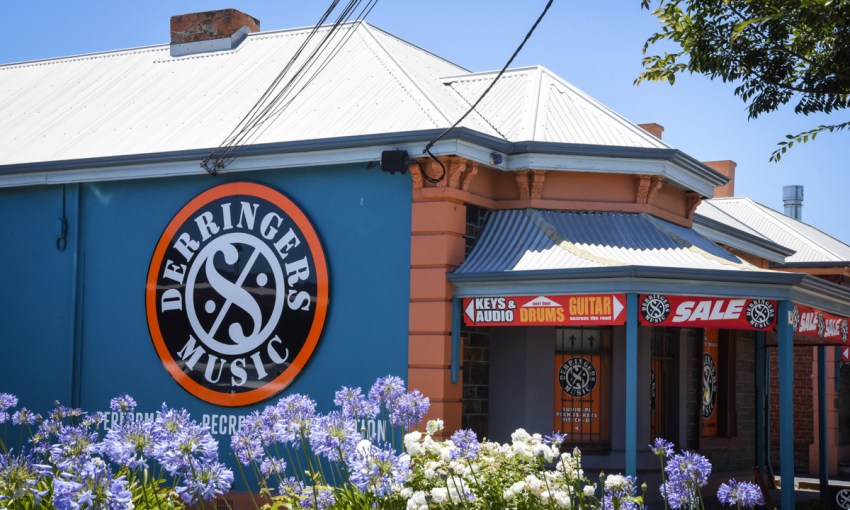 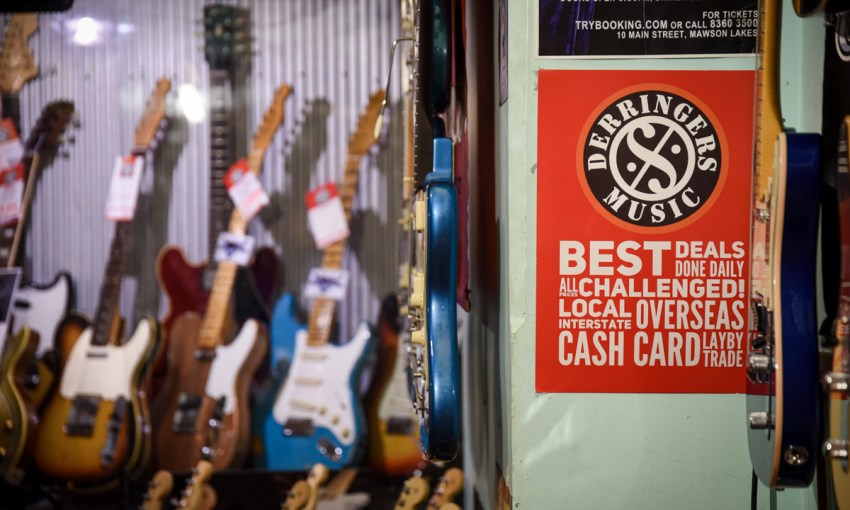 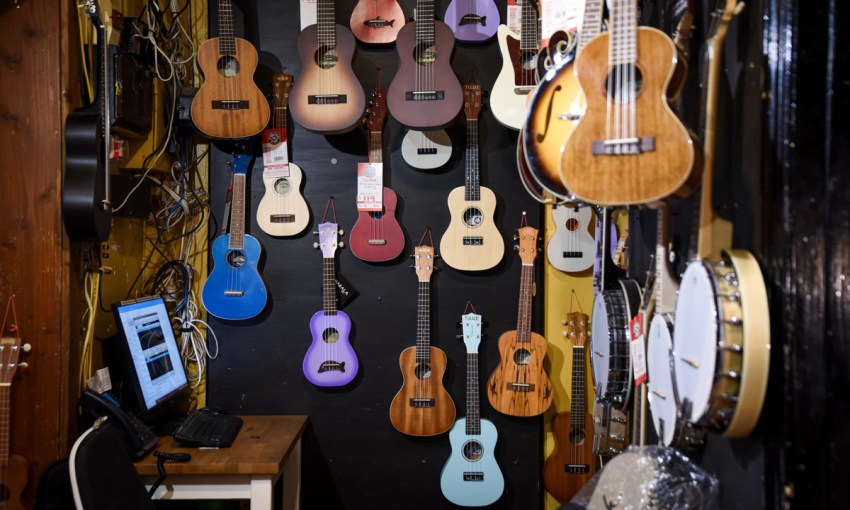 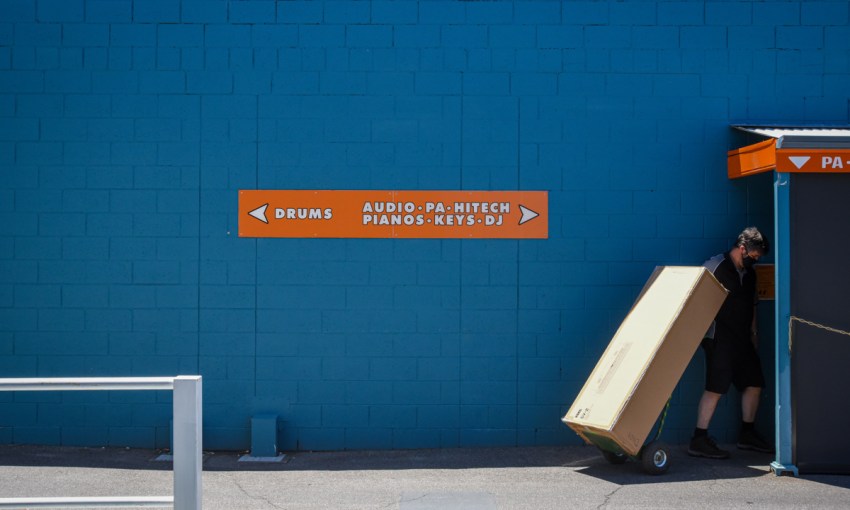 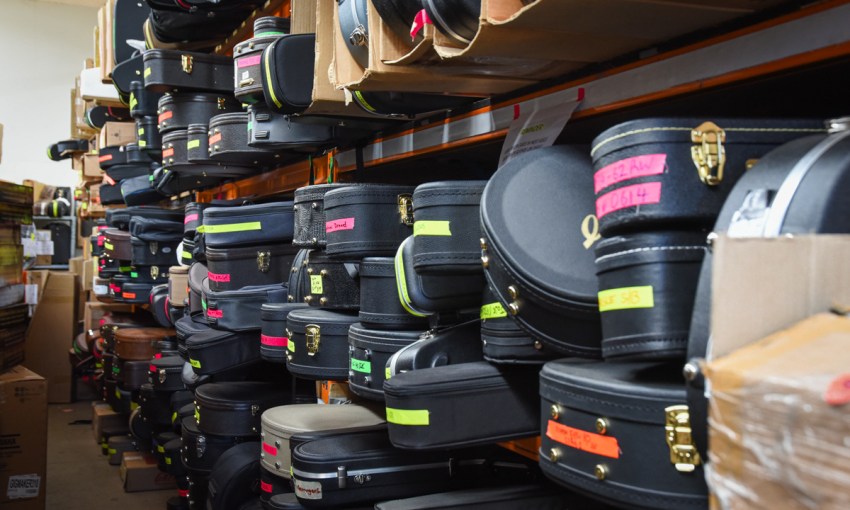 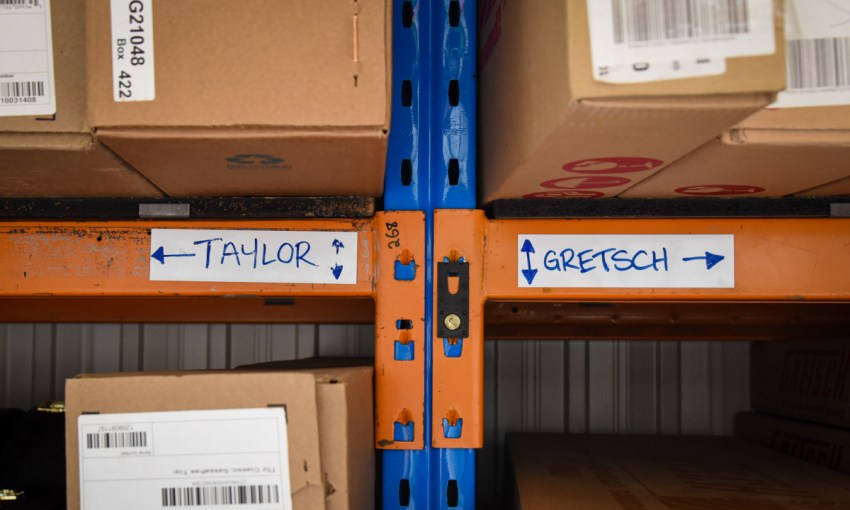 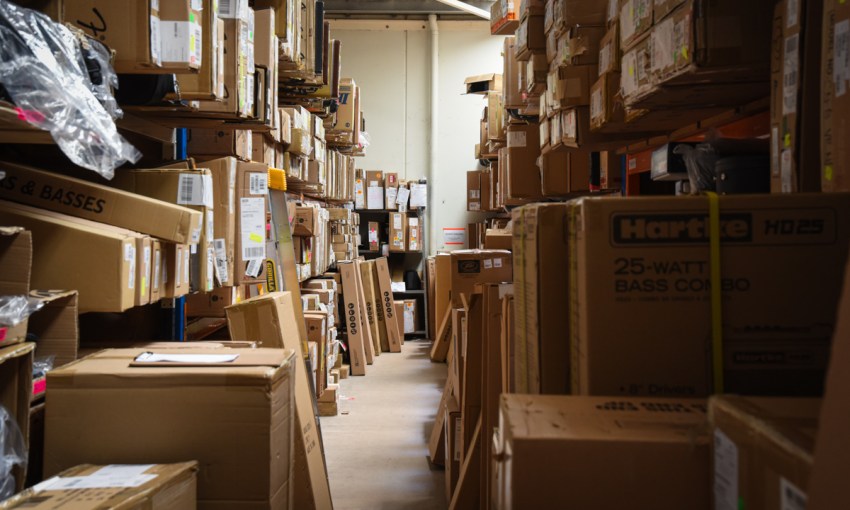 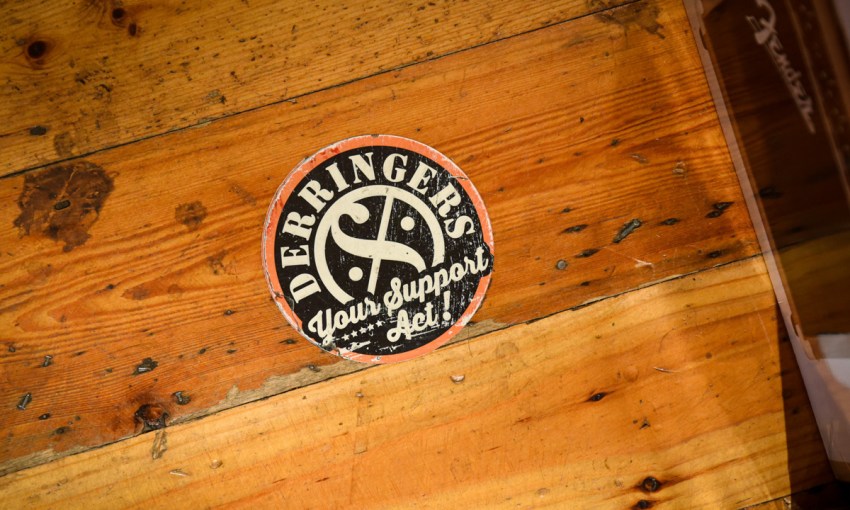 For musicians of all types, walking into a Derringers store is an exercise in giddy overstimulation.

At the guitar shop on Leader Street in Forestville, a six-string fanatic can ogle hundreds of guitars from dozens of makes and models. Gibsons, Taylors, Matons and Clarkes jut out from the walls and tower overhead. There’s little space left for a trial strum. Behind the counter is an abundance of accessories, too – plectrums, capos, cables and strings.

Over the road at the drum shop, there’s a bevy of tools – multitudinous drumstick and cymbal options for rock and jazz kits, and more mallets for timpani drums than the casual music fan might realise exist.

Owner Peter Vitek has run Derringers for 40 years, initially as a guitar repair workshop under his own name before rebranding to Derringers in honour of American musician Rick Derringer.

The business, in Peter’s words, is an addiction that’s got out of hand.

Peter’s first addiction was to guitars. As the business expanded into drums, audio and music technology, it morphed into keeping on-hand any piece of equipment a working musician might ever need. 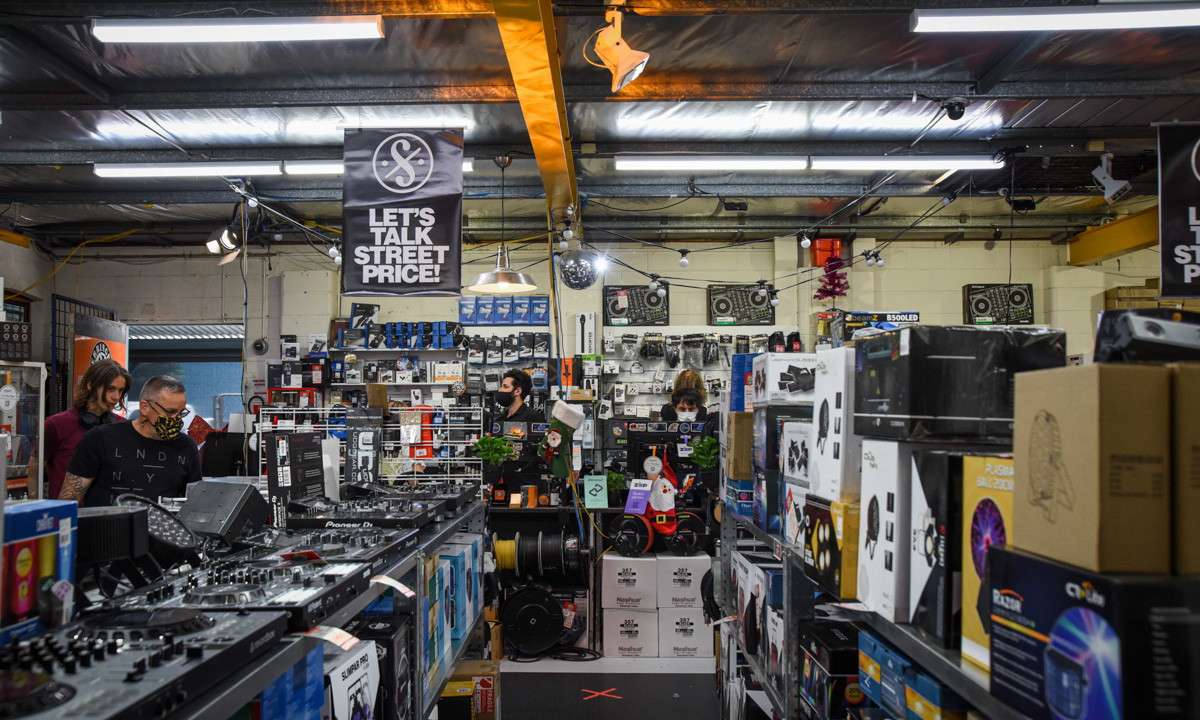 Rows of everything you ever wanted

A lot has changed in retail in the last decade. Through the internet, the industry has opened to a global marketplace. A customer with a grand or so to spend on a new instrument will do their research to find the best price, with little care for where it ships from – be it direct from the brand, a big-box warehouse, or a cottage-turned-shop in suburban Adelaide.

In order to compete, Derringers runs its online store in addition to its Forestville and CBD brick-and-mortar locations. “It’s become a big part of our game, and our online store has doubled, trebled, quadrupled,” Peter says. This growth has only become necessary because of the shrinking margins caused by a globally competitive market.

Smaller margins mean “you have to sell twice as much, just to do the same as you were doing,” Peter says, which also means carrying more stock on site. This has long been important to the business, as Derringers has always focussed on servicing industry professionals. To serve its customer base in real-time, Derringers has needed to carry abundant stock to protect musicians from the vagaries of global supplies and shipping delays.

This “costs you space and money,” says Peter, who says the business is in the process of moving to a bigger warehouse, behind its current warehouse. The old one will become additional floor space for Derringers’ audio and keyboard departments.

The stresses of an independent music retailer battling against major competitors are many. Peter, who is mild in temperament and cheery in tone, keeps a level head by not getting too bogged down in minutiae. “If you look at percentage [growth], you’ll go stupid looking at it and throw your business away,” he says. “You’ve just got to make enough dollars, plus some to put in the bank for a rainy day.”

In our interview, CityMag describes Derringers to its founder as a retail business. Peter pushes back against this categorisation, despite the shifting of units being the business’ primary financial concern.

Derringers also has an equipment hire component, which has shrunk as players like AJS and Novatech (the latter founded by two ex-Derringers employees, Leko and Milenko Novakovic) have entered, recycling outdated but high-quality production equipment as hire gear. COVID-19 obviously had its detrimental effects, too.

But this equipment hire business is not key to Derringers’ identity, either.

Derringers, in Peter’s mind and the minds of many of his customers, is “an industry service centre”. Not only a place to buy the gear, but somewhere to turn to for advice. 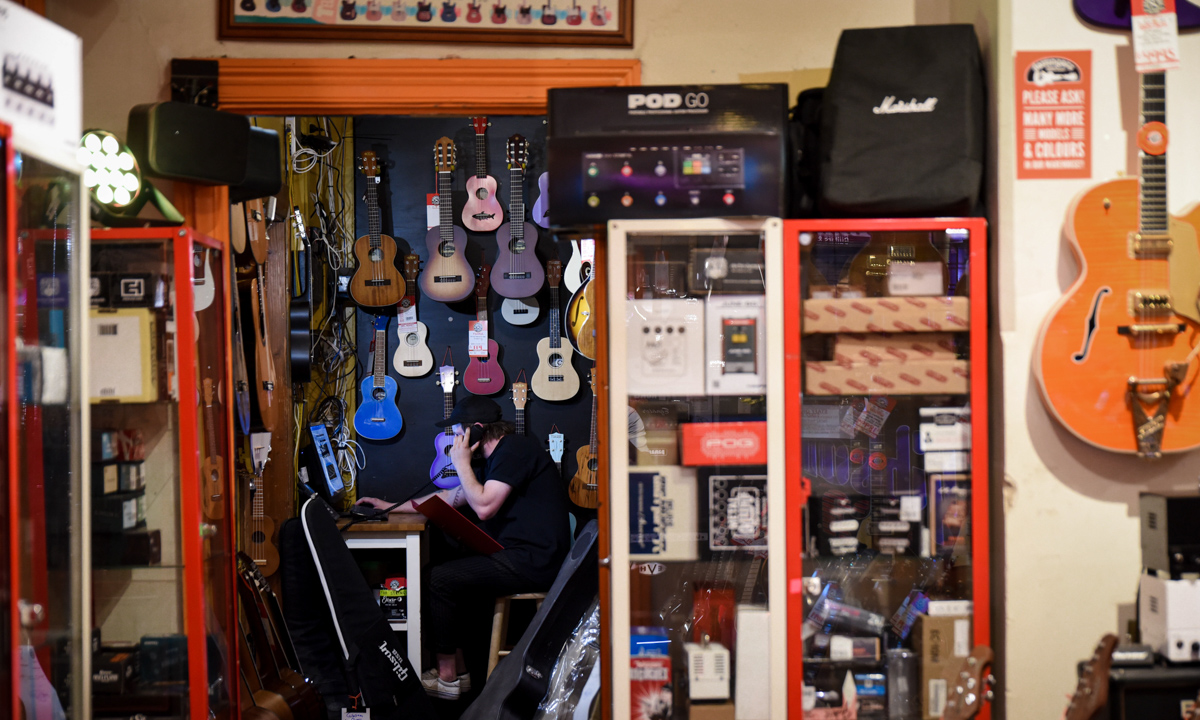 “Our lock-in has always been with the serious gearhead,” Peter says. “Music-creating, knows all the bits and pieces and plays in an original band, more than likely. Home-records, or is a great guitar player.

“We have to provide the therapy,” he laughs. “The mop-up after the weekend’s bad gig or something, when you come in looking for a new guitar, or software problems, hardware problems.

“You are trying to solve a Rubik’s cube for every mechanical and/or creative problem everyone had on the weekend after the gig.”

This flows from the earliest days of Derringers, when it was a guitar repair shop built on Peter’s passion for the instrument. “Because I was a repairer, the repair side and the care side, if you like, was already instilled,” he says.

Derringers has around 46 employees (according to Peter’s memory of last year’s Christmas party), many of whom got the job by hanging around the store as customers. Peter describes his team as not being “commission-paid, networking-trained, ‘how was your day’-type sales guys”, but instead holders of practical, industry-applicable expertise.

Not being traditional salespeople means Derringers sometimes receives complaints about customer interactions. But “what would you rather have?” Peter posits. “Seems we held out the longest, so they must like it.”

Staff recruitment at Derringers is deliberately informal. By bringing in friends and customers, Peter has expanded Derringers’ remit through his employee’s passions.

Through friend and former employee Sean Humphries, Peter was shown that “a 20-minute piece of doof doof, boom-tiss boom-tiss, actually had more to it”, which led to the establishment of the Derringers DJ shop.

The DJ shop was founded with a pithy guiding principle: “evolve”. Peter considers himself a chameleon – able to bend his interests towards whatever is the music industry’s New Thing.  And he is consistently rigorous in attending to the needs of whatever niche he seeks to serve.

“I take it to heart,” Peter says. “I do it well, I chock it up with stock… and I provide well beyond just selling the goods.

“We provide the spare parts, and a deeper [understanding]. Because we really are a store born of the professional muso, or the venues, and [we offer] that sort of support.” 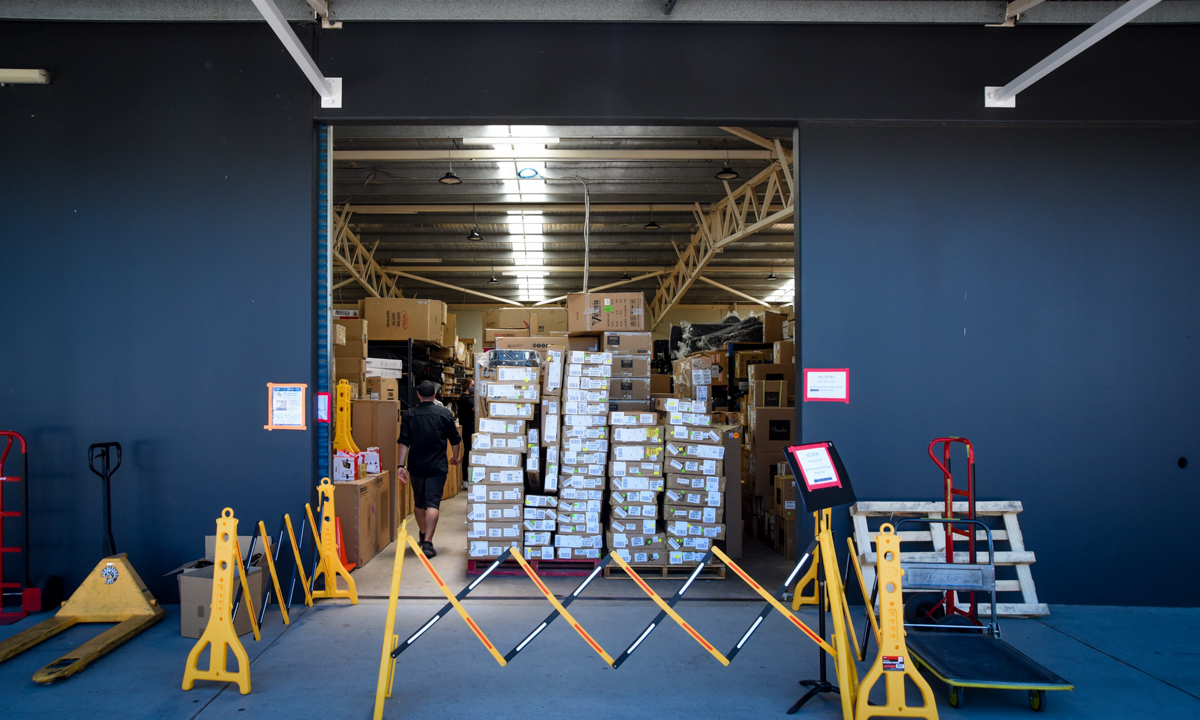 Anticipating your every need

Peter considers his role within Derringers as the “ringleader of a group of people who all have a similar interest” – many of whom share a non-conformist streak he sees in himself. He has always thought of Derringers fondly as the ugly duckling of its contemporaries. But change is slowly coming to the business.

Retirement is not yet a thought in his mind, but Peter is now starting to consider a succession plan. (His wife, Elaine, and kids, Erin and Tom, are currently in the business.) In order to make the eventual handover smoother, Peter is now trying to create structure within a business he’s built largely on intuition and nous.

Change is also happening at the customer-facing side of the business. There is a new website in the works, and a fairly benign dress code has been introduced: chinos and uniform shoes.

Due to the non-conformist attitude Peter encourages in his staff, this was not a popular decision. “The individual entities are gnashing teeth,” Peter says, smiling.

The tidy up and restructuring is to ensure the future of the business – one where Peter is less involved.

“We have to tidy up a few things. And that tidy up is better to hold our business in good stead, given the era of the business we’re now in,” Peter says.

“Because we’re so free-range, that generally falls on me. It falls on the individuals too, but at the end of the day, the buck stops with me.”

Peter says he has “a couple of partners… considered already that would take my place”, and the plan is for his son Tom to have a larger role in the business.

But this all still seems a long way off.

“Because I’m more on the shop floor, more product aware, definitely onto purchasing and doing the numbers, I just get addicted to it again,” Peter says.

“It’s a lifestyle for me. It’s an addiction. It’s what I do. I’ve never even thought twice about anything else… It’s just completely encompassing of the things I like doing.” 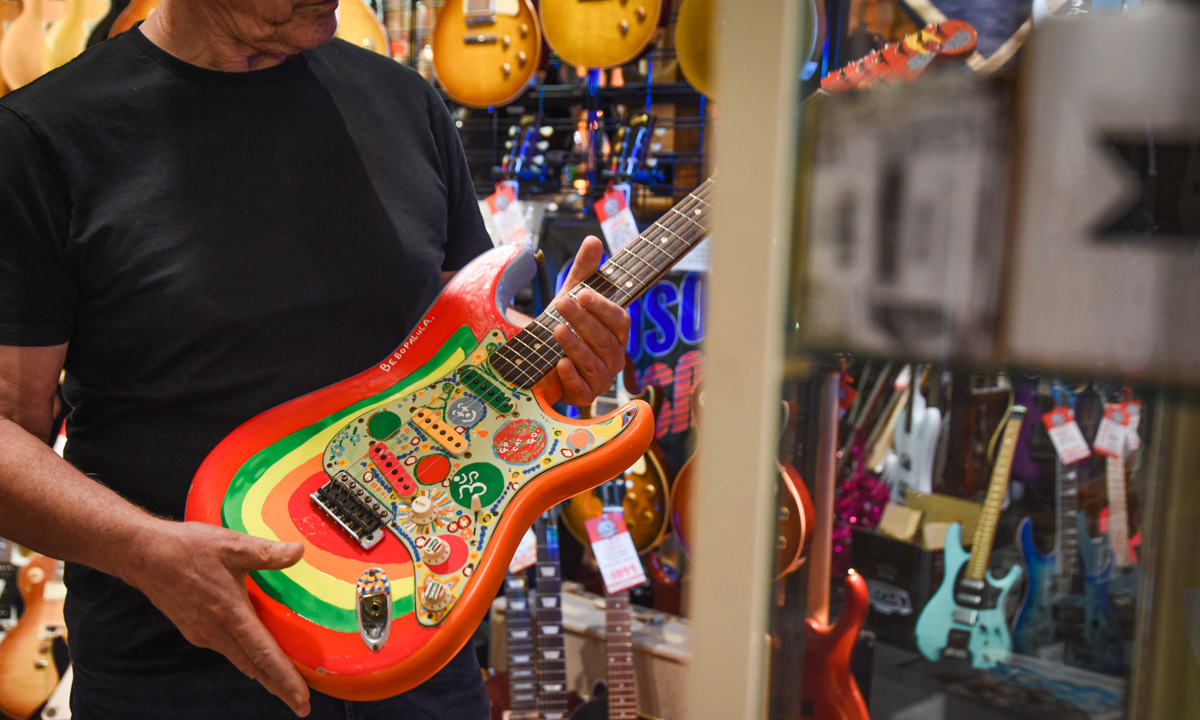