Small-scale suburban farm Sovereign Soil is demonstrating how Indigenous knowledge and a community-focussed attitude can create a better kind of farming culture in Australia. 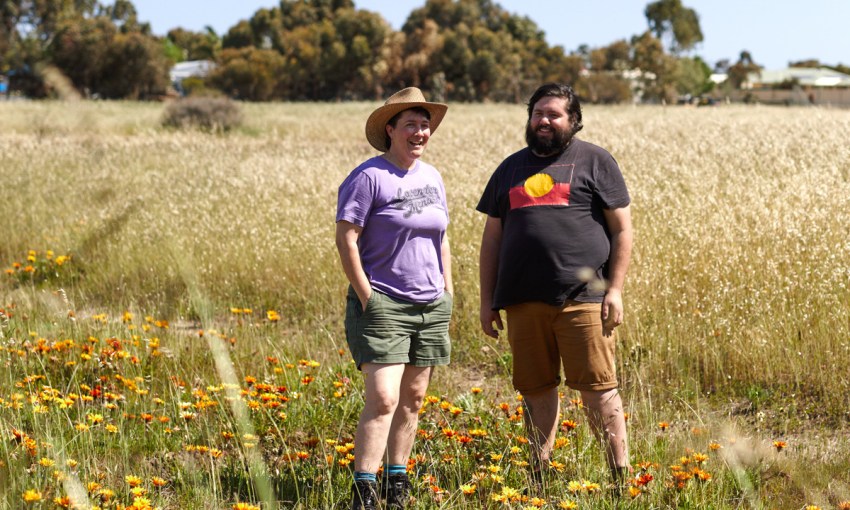 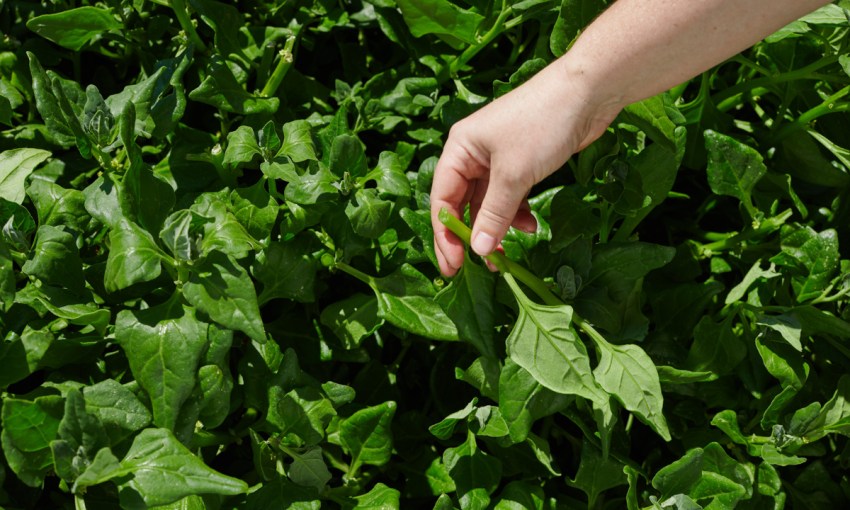 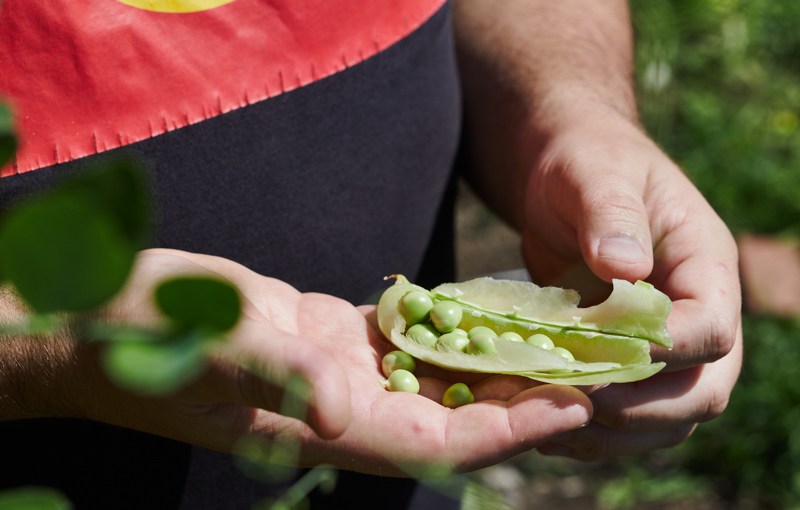 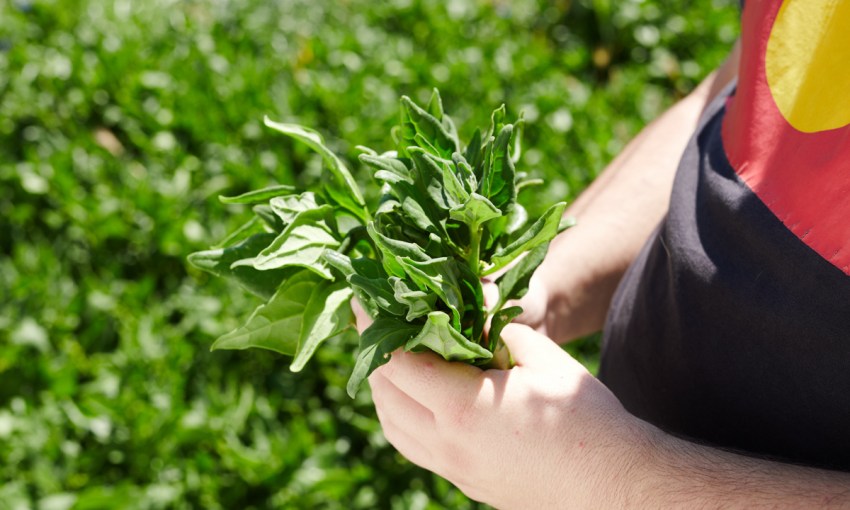 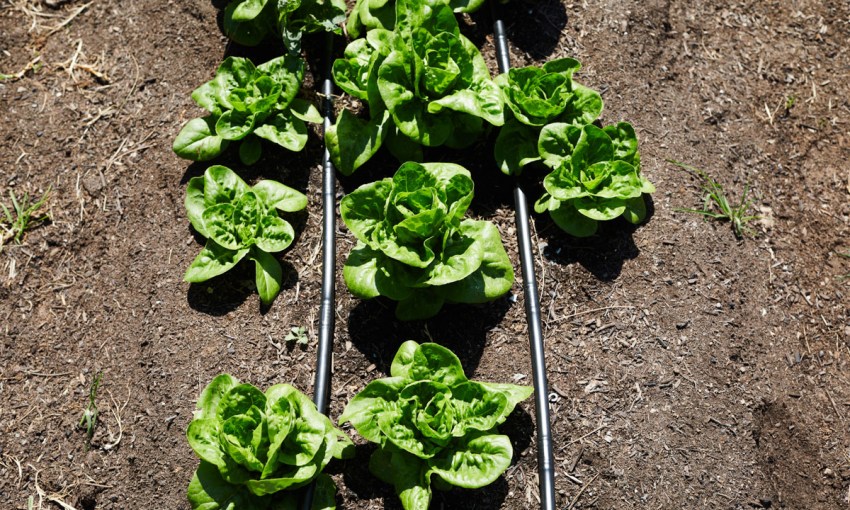 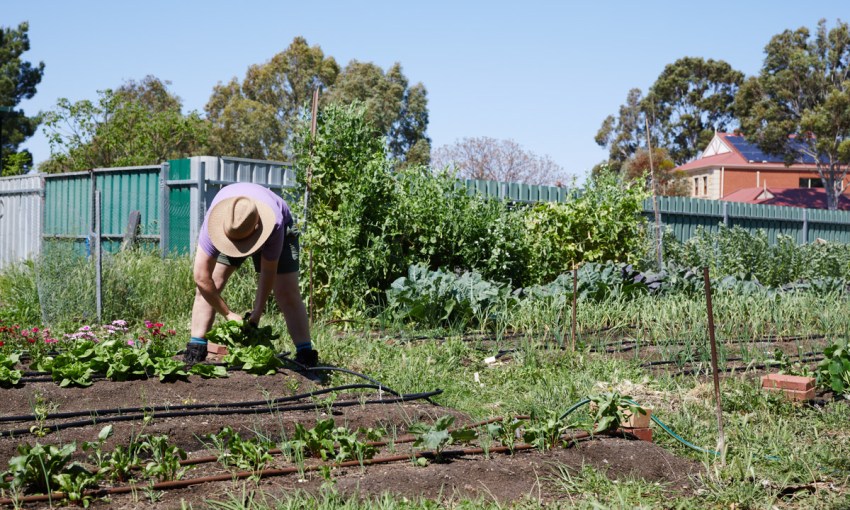 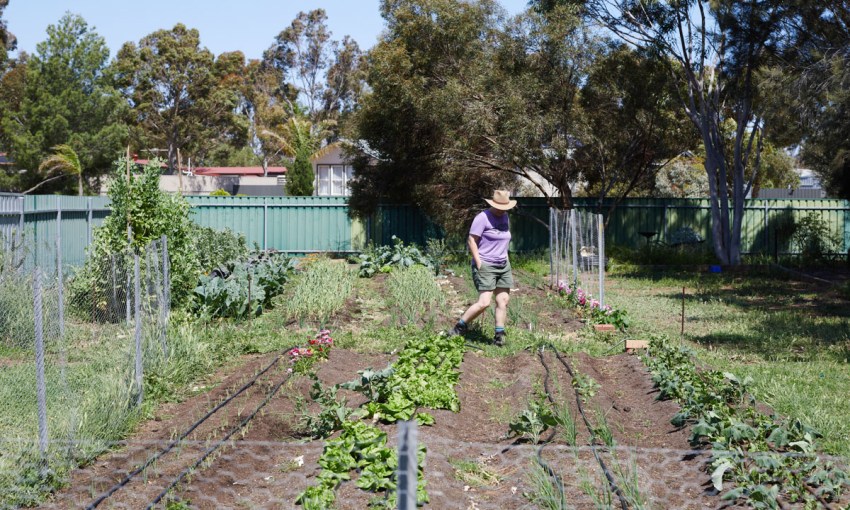 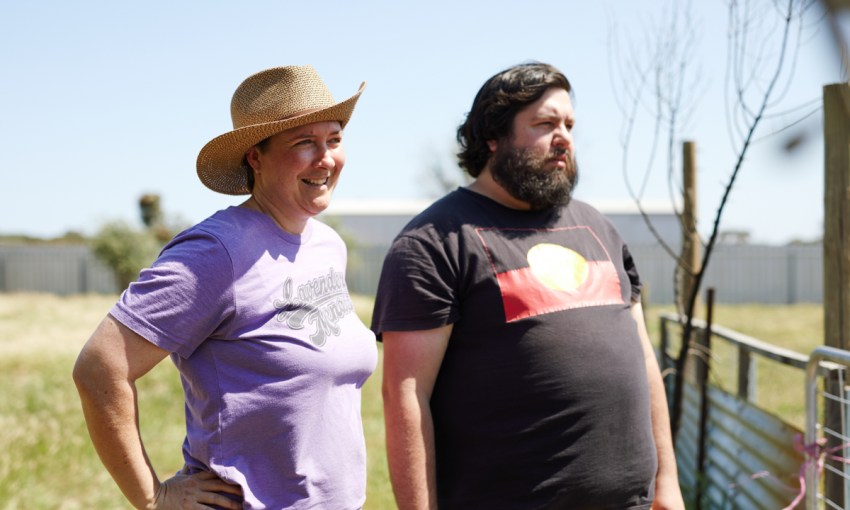 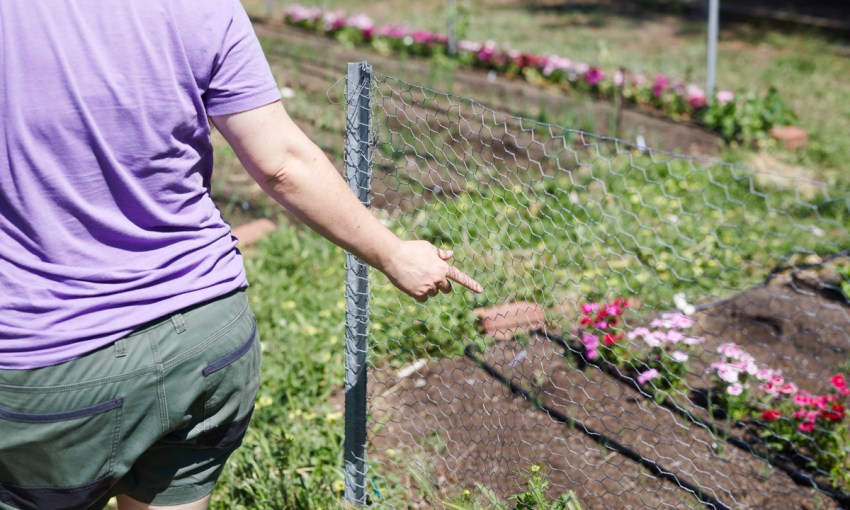 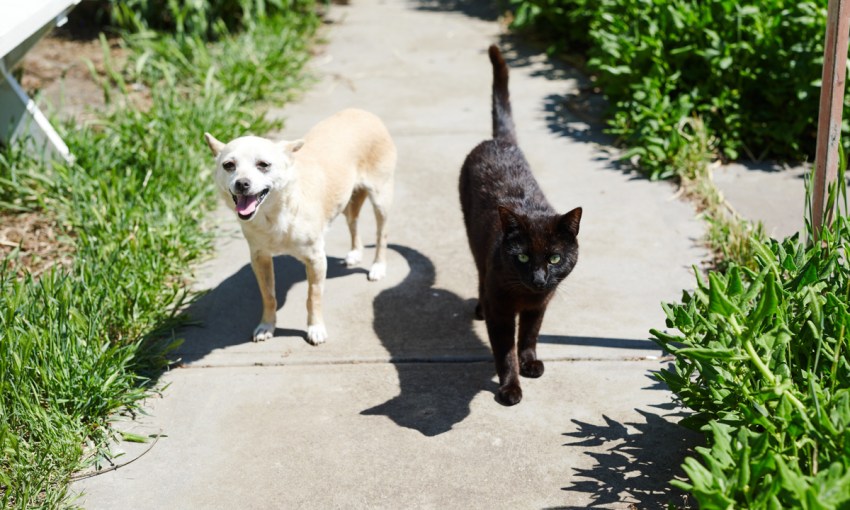 Dominic Guerrera puts his hand into a bright green sea of leaves.

“This is our pride and joy – our Warrigal greens patch,” Dominic says, his hand emerging with a sample for us to try. “It’s native spinach and grows so amazing.”

From the backyard of this Two Wells property, Holly Giblin gently removes a stem of karkalla from an adjacent part of the patch.

“It tastes like a salty cucumber,” Holly says, popping a piece into their mouth.

A wide-brimmed hat with a rainbow badge sits atop Holly’s head. Dominic stands tall in a black t-shirt emblazoned with the Aboriginal flag. Both farmers bring their philosophies and identities to the dirt.

“We want to make Sovereign Soil a place where people of colour feel welcome, queer people feel welcome, particularly trans people,” Dominic says. “Instead of just being the person who goes to Woolworths and buys something, you can fully participate in our system.”

The idea to start a small-scale market garden farm on Dominic’s family’s property first took hold when Holly left her white-collar job due to burnout. Dominic was similarly exhausted from his work in the Aboriginal health sector.

“I had enough of professional life. I worked in  academia and in social work,” Holly says. “And I’m going to sound like a prepper, but I became more concerned about general security, food security and social safety nets. I wasn’t feeling like I was doing that in the existing social work sector.”

Dominic pitched the idea of starting a farm to Holly, and Sovereign Soil has since grown from that moment. 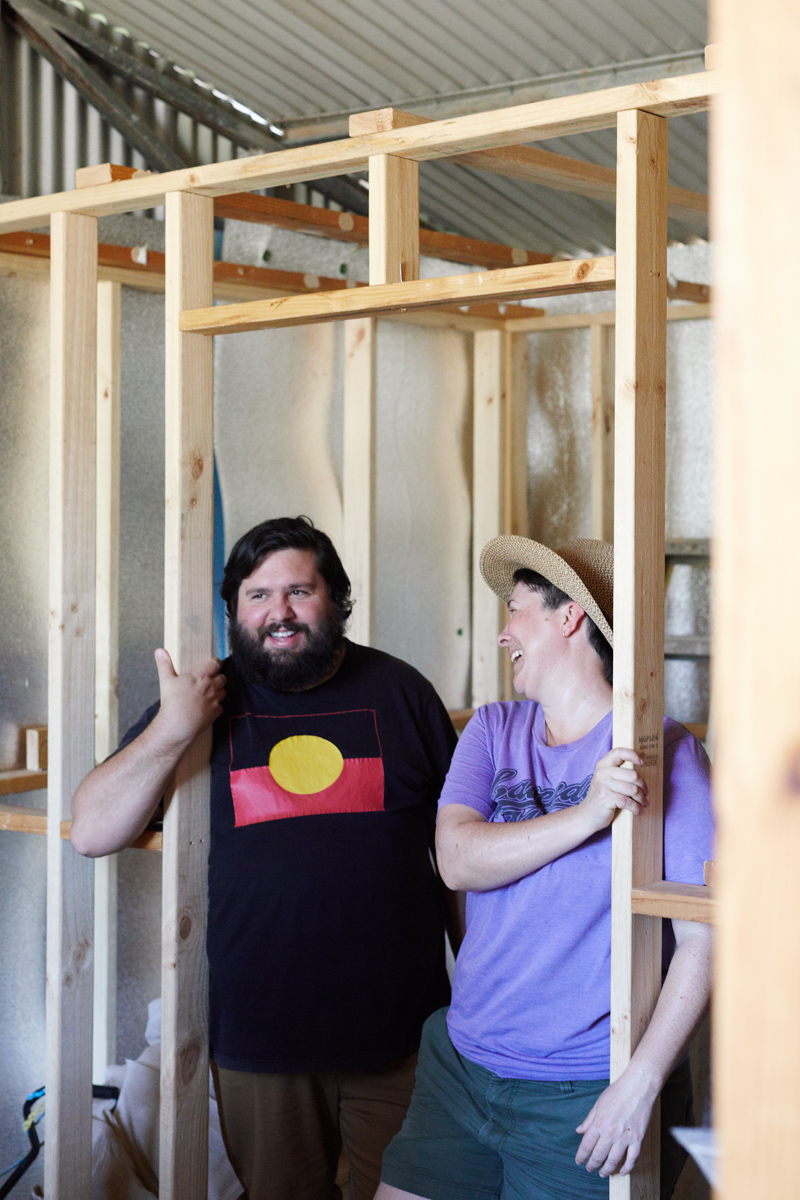 The duo hopes to grow enough organic produce to make a living from the business, but there’s a deeper philosophy to the project: decolonising white agricultural spaces while caring for community and Country.

“There is a lot of injustice around food,” Dominic explains. “That stems right back to farming and commercialisation, and we want to give back to community. Once we’re a bit more established we want to be part of reciprocity.”

Dominic has witnessed Indigenous communities paying exorbitant prices for bad quality fruit and vegetables, and he says most arable land in Australia is owned by white people.

According to a report published by the Natural Rural Health Alliance in June this year, Aboriginal and Torres Strait Islander people living in remote communities have a “disproportionate burden” of chronic disease in Australia, due to poor nutrition. The report says the long-lasting effects of malnutrition can impact life expectancy and community wellbeing.

Dominic says there are people in Indigenous communities with agricultural knowledge, but who don’t have access to land or resources. Because of this, some are deprived of the opportunity to create wealth or attain assets from that knowledge.

“Or they just don’t have the time to farm,” Dominic says. “When your community is overrun with chronic disease, and poverty and oppression, growing food is the last thing you think about.

“For me, I see the farm as a reclaiming of culture of sustainability and autonomy. The sovereignty of food.” 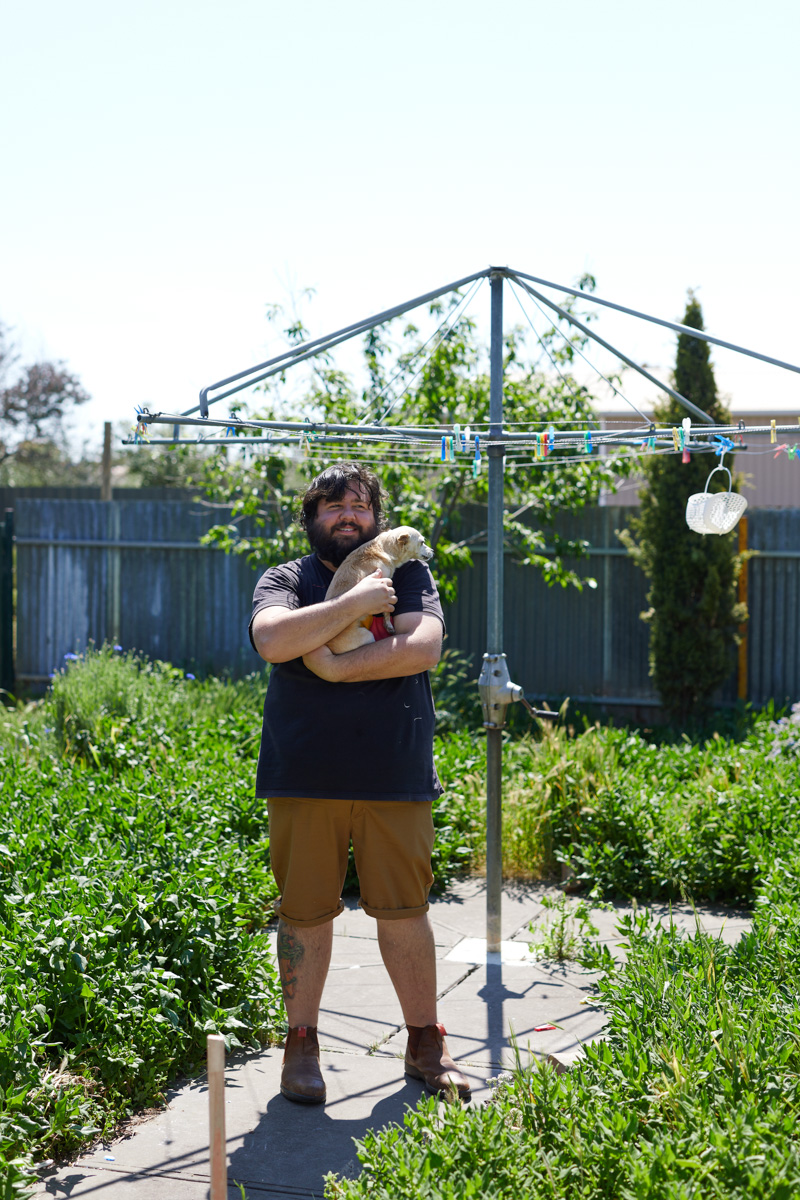 As we talk we move slowly across the 10-acre property and stop briefly in front of the farm’s biggest patch. It’s still in its infancy, but we can see the buds of lettuce beginning to grow.

As part of Sovereign Soil’s care for Country mantra, great thought has been put in to how to operate the farm in a sustainable way. Holly and Dominic have avoided rototilling, an efficient but destructive process that would turn up eight inches of dirt, with little regard for root systems beneath the garden. They have instead opted for a “topsoil, no-dig approach,” which cracks the upper layer without disrupting what’s established underneath.

Commercial farming prioritises yield over the health of the environment, which is not what Sovereign Soil is aiming for, Dominic says. “It’s looking after the soil in which you’re growing. A lot of farming practices are just taking and not giving back.”

Inside a shed on the property that will soon be insulated and fitted-out as a cool room, Holly shows us tools they’ve used to clear the area. Relying on equipment like line trimmers and hoes takes much longer but is better for the overall health of the property. Dominic and Holly have launched a Sovereign Soil fundraiser to raise money for other equipment.

Once the produce is harvested, Holly and Dominic load orders into biodegradable BioPak food containers and starch-based bioplastic bags, and then deliver to value-aligned cafés.

Sovereign Soil will eventually launch to the general public and appear at farmers’ markets. From there, they’ll implement a sliding-scale pricing system so as to be accessible to as many people as possible. 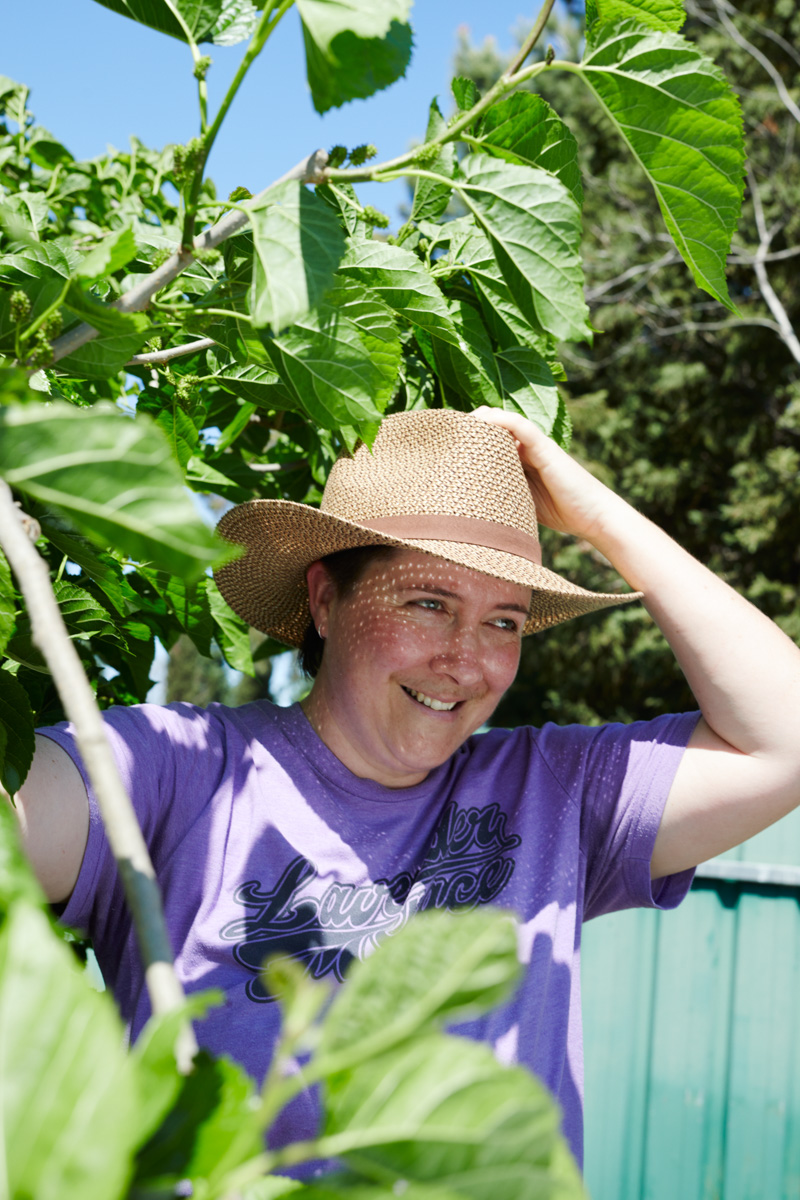 Holly and Dominic haven’t settled on how that system will work, but it is an attempt to address the inaccessibility of organic produce for some.

“It’s a real issue, particularly in the organic scene, of it really not being affordable for low-income people,” Holly says. “That’s going to be really tricky.”

In five years, the duo want to host a range of educational workshops and community engagements, to show people how to sow their own seeds and experience autonomy through food production.

Dominic points out Sovereign Soil is not the first business to launch with the aim of dismantling the white, and predominantly cisgender, farming landscape; his and Holly’s work is a “continuation of other people’s knowledges, especially Indigenous knowledges.”

“We really want to reject this notion of being the first or being the best or being the most profitable, but rather actually looking at the value of what our work and business is contributing.”