Measured by the millimetre, South Australian retailer Barossa Fine Foods has carefully and assuredly built their business to the point where now the only place left to expand is interstate and overseas.

When Hans and Anna Knoll escaped post-war East Germany in 1957, it was with the promise of a new life. Anna was already pregnant as they began the long journey by sea to Rapid Bay, and today their son Franz likes to say he was “made in Germany but born here.”

As the founder of smallgoods producer Barossa Fine Foods, Franz has drawn heavily on that German heritage, but his is a South Australian success story.

Meeting CityMag in the company’s headquarters, Franz describes the Knolls as “fundamentally a smallgoods-producing family.” Like his great uncle and father before him, he was introduced to the trade when he turned 15. By then his father had started his own business and Franz worked at Bavaria Smallgoods for 15 years until it was sold in 1986.

The terms of that sale included a five-year non-compete clause in South Australia, so he spent time in Darwin and Sydney managing factories before the lure of home proved too strong. As soon as he could, he returned and began looking for a business of his own.

In 1991, he and his wife Barbara bought a Central Market stall called Barossa Fine Foods. Within a few months Franz and Barbara resolved to improve their products’ quality and business profit margins by making the smallgoods themselves. So the couple began breaking down and processing beef and lamb at the elder Knoll’s Barossa property. Before long they had moved production into their own facility at a modest butcher’s shop in Fairview Park.

For the next few years, Franz would head to work at 3am and start working on the day’s order. Barbara would arrive a few hours later, picking up the smallgoods and delivering them to the stall on market days then doing the grocery shopping, before getting home in time to take their four sons to school.

On weekends and school holidays their children would be at the stall, selling mettwurst in their best shirts and bow ties. Decades later, the sons studying at university would come to work in between lectures – and that original store is still there, along with the Knoll family’s work ethic. But Barossa Fine Foods has grown far beyond its original home.

Even with the butcher shop, times (and profit margins) were tight and Franz soon realised that the only way forward was to expand.

Recounting the company’s history, it takes Franz a while to settle on points of expansion.

And that forward focus is evident in the progression of the business, which has just expanded the footprint of its current factory to 5,000 square metres. That’s a 200-fold increase in a little less than 30 years – not bad for a business that remains entirely family-owned and run. 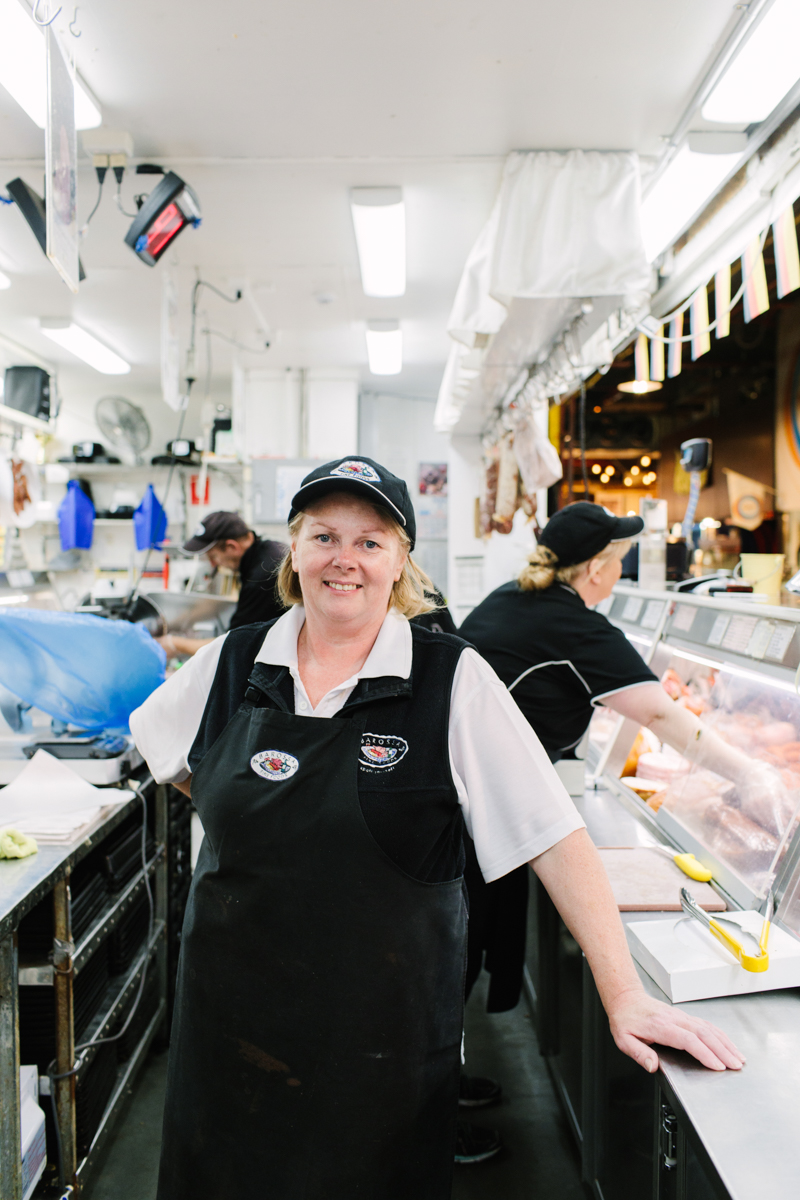 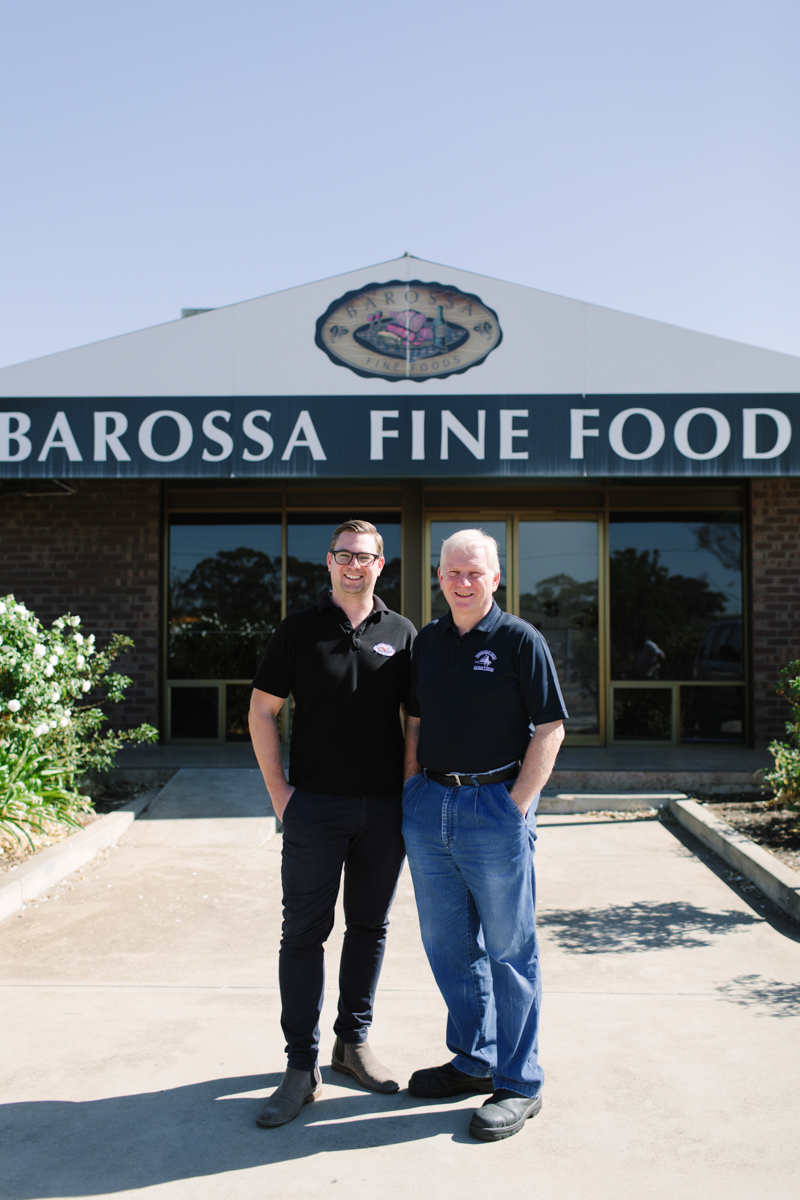 Touring that factory, which sits on an industrial lot near the RAAF base in Edinburgh, is like walking through a maze. There are smokers and ovens of every conceivable size, fermenting rooms, salami drying rooms, cooling rooms, and a walk-in freezer, a seasoning room, box stores, a slicing room, a packing room and an engineering workshop to look after the machinery spread throughout the facility. When Barossa Fine Foods first began expanding, it was to bring as many processes as possible in-house, and that philosophy still prevails.

Over the course of a day, an astonishing variety of products come out of the factory – Franz says, “no other factory in Australia does all the things we do.” Though the company has refined the processes to maximise efficiency and remove wastage, making a sausage is still by and large the same as when he learned the trade: “all we do is take the meat, mince it, add some spices and sell it – there’s no magic.”

The magic comes in surviving in an increasingly competitive retail market. Barossa Fine Foods has achieved this through constant (and calculated) expansion.

The factory now produces more than 1,000 different product lines, though not all of them carry the Barossa Fine Foods logo. That’s because the company has acquired other businesses along the way, including Angaston’s Schulz Butchers in 2003, Standom Smallgoods in 2013 and seafood specialists Angelakis Bros in 2018.

Rather than absorb direct competitors, Franz has targeted businesses with a different focus each time. While the parent company produces everything from biltong to char siu, Schulz stays closer to its German heritage and Standom focuses on traditional Eastern European smallgoods.

At Angelakis, almost half of the turnover comes directly from supplying restaurants and hotels. That requires a tight supply chain.

“You can put in an order at 11 o’clock at night and you’ll get it delivered by midday,” Franz says, marvelling at the efficiency of his latest acquisition.

The main factory has constantly grown as production is moved there, and, from a single market stall, Barossa Fine Foods has grown into a company with a $65 million annual turnover and 322 employees. Unsurprisingly the Knoll name features prominently among those employees. 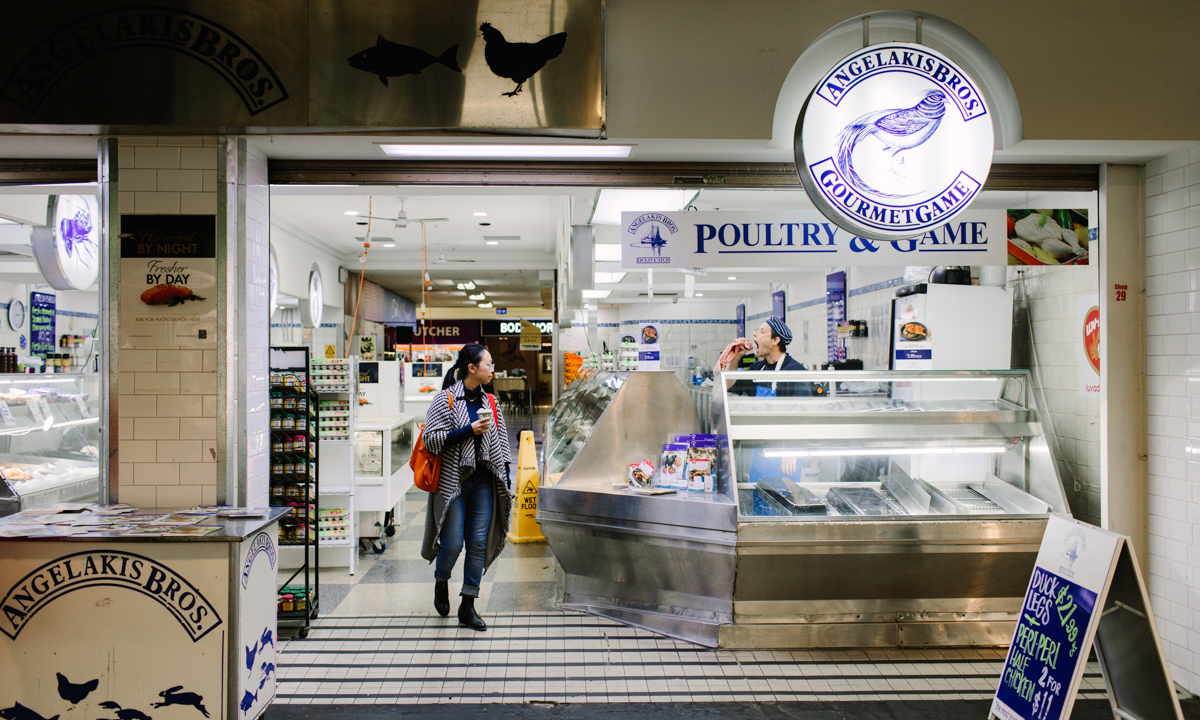 Less than four years separate Franz and Barbara’s four sons, who are all aged between 34 and 37. And with Franz spending most of his time at Angelakis’ Field Street facility, the next generation is leading the way at Edinburgh.

Dieter, the eldest, joined the business as soon as he finished school and studied as an apprentice at a small butcher’s shop in Germany before returning to work as production manager. Next in line was Stephan, who worked in marketing and sales before taking over as GM, a role that he relinquished in 2013 to enter state politics as the Member for Schubert (the electorate that covers the Barossa Valley).

His public profile as part of Steven Marshall’s cabinet has meant that family disagreements about deregulation recently spilled into the public forum, but the ultra pragmatic Franz (who himself sits on the City of Adelaide’s Council) sees it as a healthy disagreement. “In business, we each have a different way of looking at things,” he says, and indeed when Stephan was working at Barossa Fine Foods they didn’t always agree but still grew the company together.

Andreas Knoll took the reins when Stephan left and the chartered accountant describes himself as “the numbers guy,” while the youngest brother Alex has “the gift of the gab.” His role as Business Development Manager is crucial to the company plans for continued expansion.

In 2017, Barossa Fine Foods set a goal to double turnover by 2022, and the Angelakis takeover alone brought them almost halfway there. The rest of the growth will come from expanding their national footprint – following a similar strategy to the Coopers family and brewery, who staved off a takeover bid by growing their market share beyond SA’s borders.

Barossa Fine Foods’ targets for growth are measured, but Andreas knows if they can reach even half of the SA turnover in those markets, it will transform their local business dramatically. With an eye further to the future, he’s also begun exporting small quantities of smallgoods to Singapore, with Macau to follow soon.

“We’ve taken 26 years to get where we are,”  says Andreas. “Now we want to fast track that in a couple of years.” 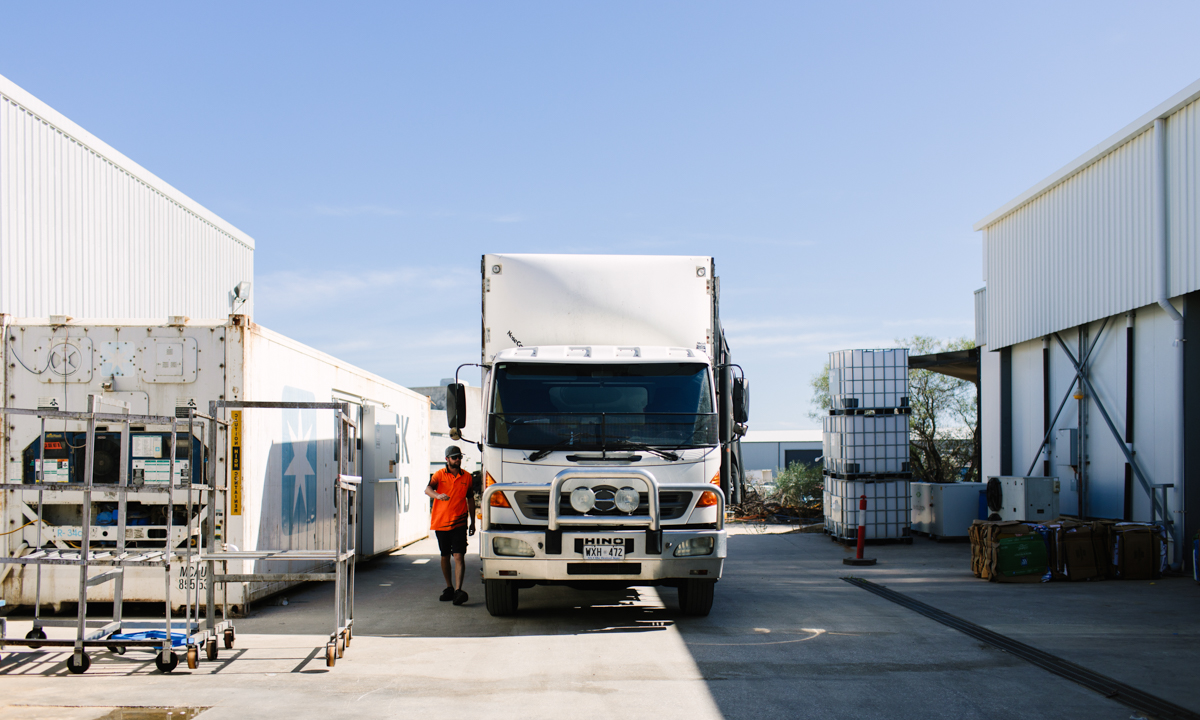 Preparing for growth has seen the company take control of their supply chain. Rather than relying on distributors – with multiple clients who take a cut of the profits – Andreas has built a network that uses “every type of vehicle” and allows them to ship anywhere in Australia. Andreas, like his father, believes in the merits of bringing everything in-house.

And while retail remains an important part of the business in South Australia, there are no plans to expand it interstate beyond the existing Barossa Fine Foods stall at Melbourne’s Prahran Market.

As new players enter Australia’s supermarket landscape, Andreas can see the average shopper’s dollar become more diffused. Looking at this predicament objectively, Andreas acknowledges, “it’s a challenge for the retail stores,” but also sees opportunity for the wholesale side. As he puts it, “you win some you lose some,” and by hedging his bets, he’s been able to make sure the family company comes out on top.

The factory can do runs as small as 30kg, and with a diverse portfolio of products Barossa Fine Foods is able to supply all the major supermarket chains, including newer entrants like Aldi and Costco.

Deliveries regularly leave for businesses of every size, from small delis to restaurants at Tullamarine airport. Even travellers on The Ghan can dine on boudin blanc with crocodile, chicken and lemon that comes out of the Edinburgh facility.

And while there are new products being added to the list monthly, every single one of the thousand-plus items has to justify its place constantly.

Franz puts it bluntly: “anything that isn’t selling, you ask yourself ‘why?’– ‘what did we fuck up now?’”

It’s a simple process – if something is underperforming, he and his sons assess the packaging, the recipe, the way it’s marketed and try to understand how to improve it.

“The world is already full of product,” the German-made, Australian-born entrepreneur says, “and you’re only as good as your worst.” Or your wurst, as the case may be. 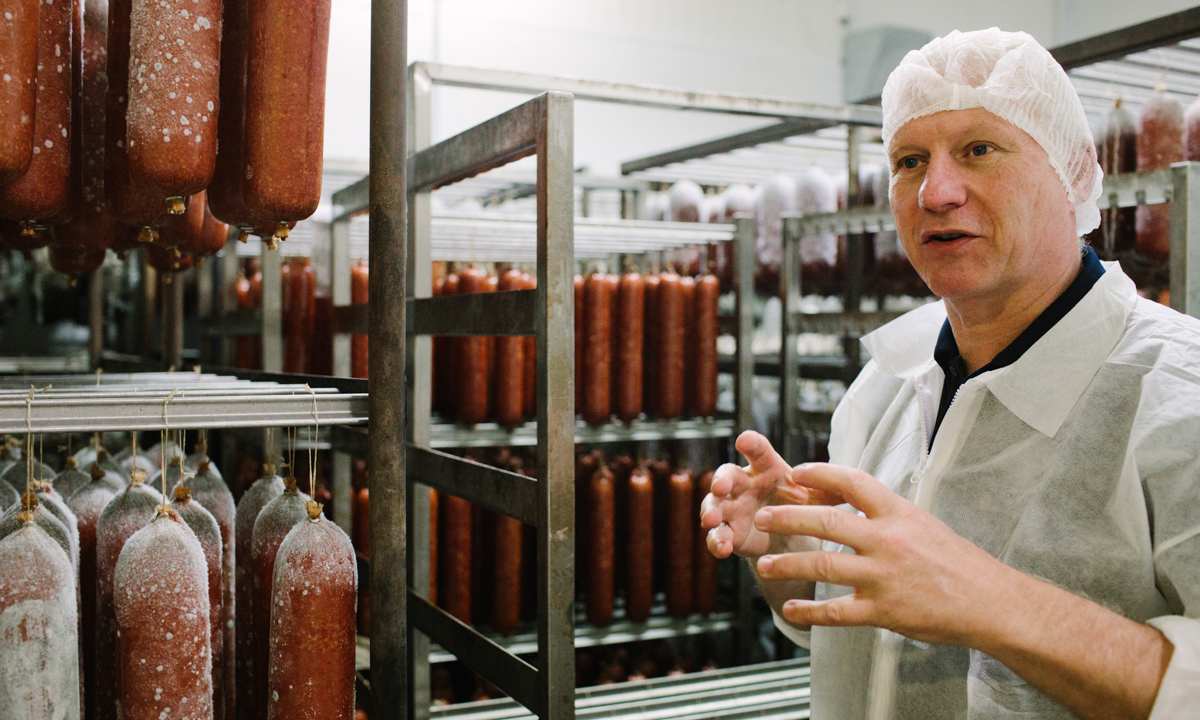