While the rest of South Australia is brainstorming ideas about how to kick-start a health and medical research industry, Bionomics is pushing ahead to create a world class drug discovery business from Adelaide.

“We’re trying to build a global company from Adelaide and I have a very firm belief you can do that,” says Dr Deborah Rathjen – the CEO and Managing Director of Bionomics.

And while locals might not be familiar with the ASX-listed company Deborah runs, it is hard to deny the business’ burgeoning international relevance. 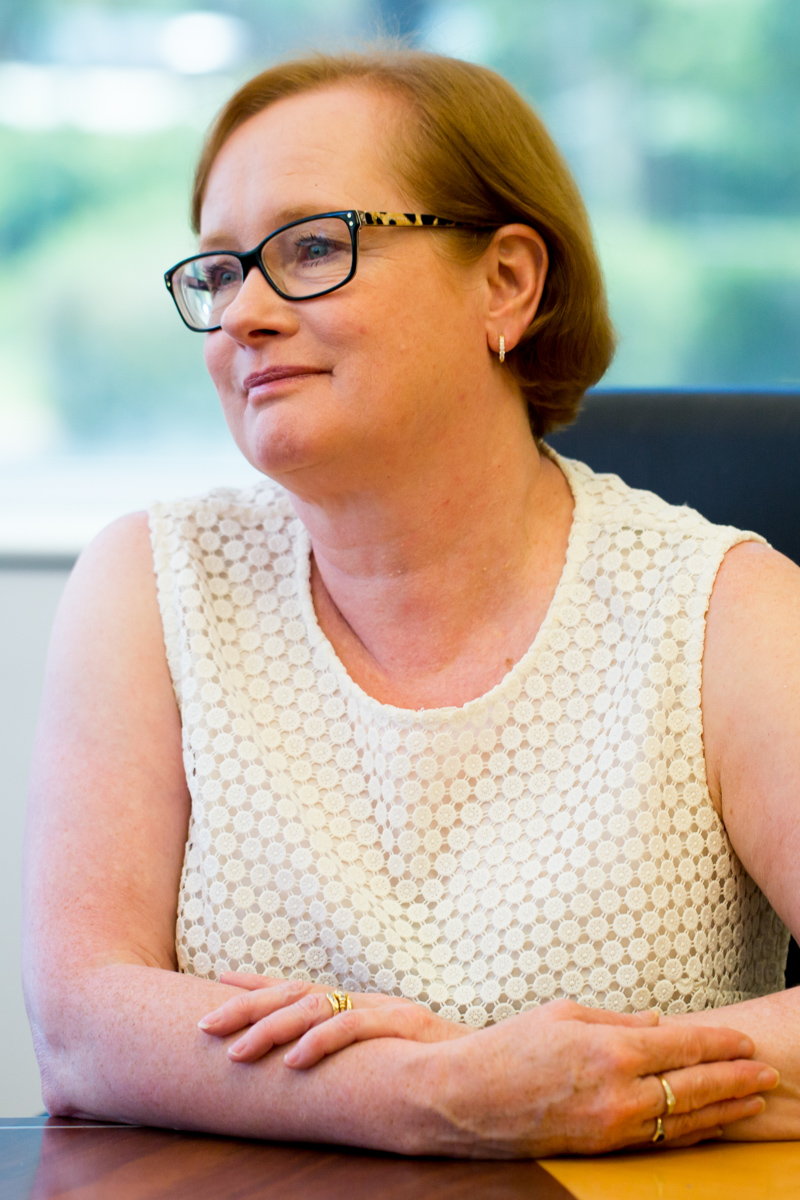 Bionomics is a biopharmaceutical company that specialises in discovering and developing new drugs, with a particular interest in treating cancer and central nervous system disorders like Alzheimer’s Disease and anxiety.

It’s been around in South Australia for more than 20 years, but has only begun to have a commercial impact in its field since the turn of the millennium, which was when Deborah, as incoming CEO, chartered Bionomics on a new path. 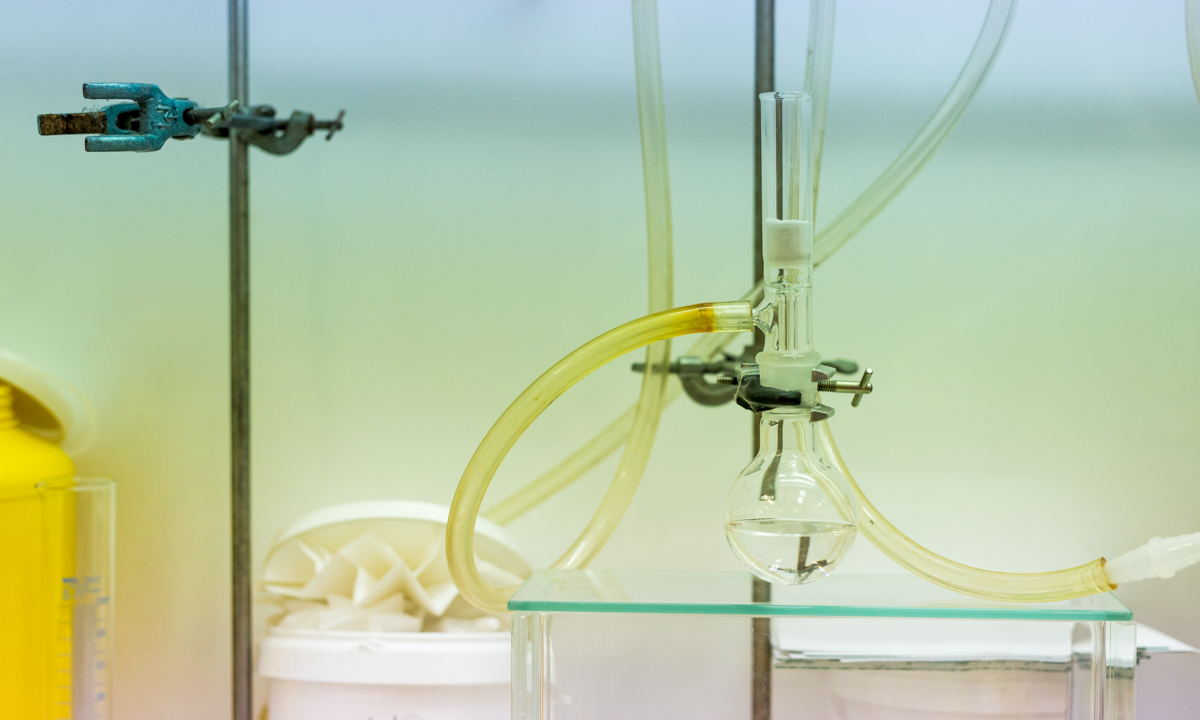 We truly have no idea what this contraption does

“The founding intellectual property for the company came from the Women’s and Children’s Hospital,” says Deborah.

Bionomics headquarters sits in Thebarton nearby major pharmaceutical company Pfizer, and the University of Adelaide campus – an area that has great potential to become a hub for the industry.

“Professor Grant Sutherland – who was leading the Cytogenetics department at the Hospital was a past President of the Human Genome Association at a time when the human genome was being first mapped. From that came the idea that Australia could build a genomics company, and Bionomics gradually transformed itself into a drug discovery and development company.

“So we have that nice underpinning of all that very strong history in the understanding of disease and biology and that enables our drug discovery efforts these days.

“From there we went on and we acquired several international companies – a couple in Europe and one in the US, we acquired a spinout from the Australian National University in Canberra as well – so that’s how we’ve built the company.” 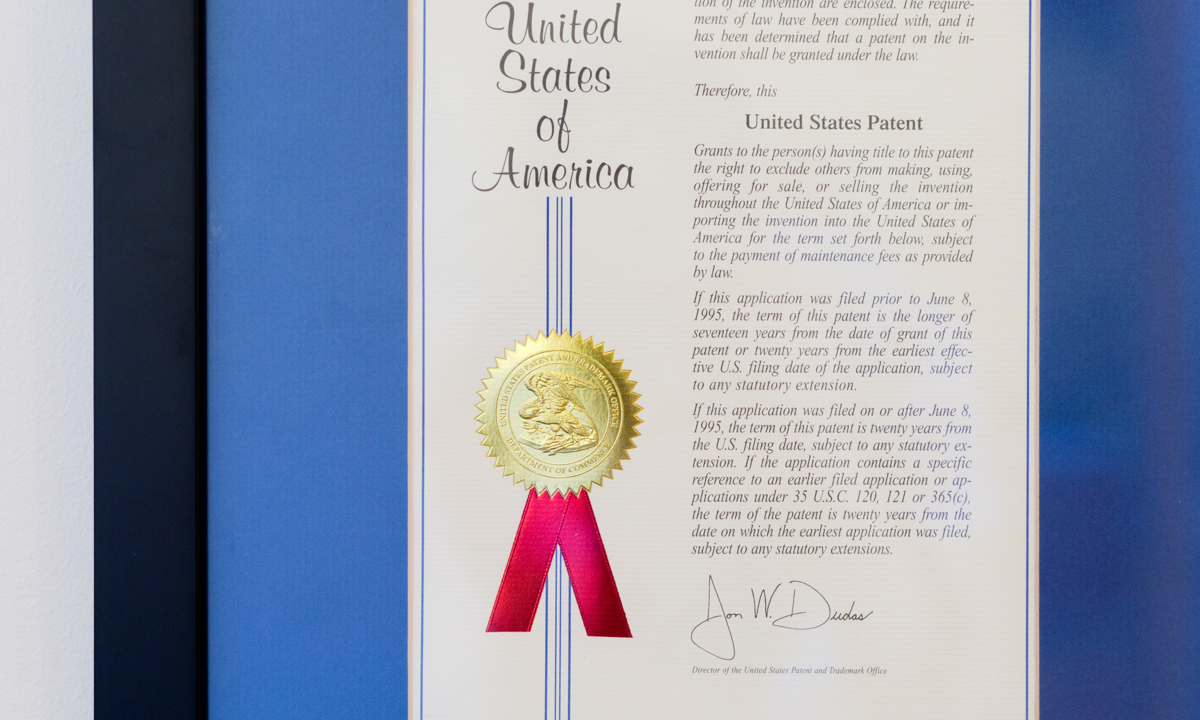 A USA patent that hangs in the Bionomics lobby

Now, 21 years after Bionomics was originally created as a company, it has a market capitalisation of $182 million, even though all of its drug discoveries are still involved in trials and are yet to reach sales stage.

Building the value of the company to this level has involved a series of strategic moves designed to showcase Bionomics unique strengths to global investors and partners.

“There are really two things in biotech that build value and that is successful product development and doing very large strategic partnering deals,” says Deborah.

It is Bionomics discoveries that have led its growth trajectory.

“Some of the products we work on, they will be the big blockbuster drugs of the future.”

“Some of the products we work on, they will be the big blockbuster drugs of the future,” says Deborah. “A blockbuster drug has to have in excess of a billion dollars worth of sales every year.”

“We’re very good at a certain type of drug discovery, which is targeting ion channels and this is particularly important in the brain. And a good case in point is our anxiety drug BNC 210 – that is a surgically precise molecule that interacts with only one receptor in the brain.

Bionomics has leveraged its strength in this kind of drug discovery to create partnerships with some of the biggest pharmaceutical companies in the world.

These deals are essential for a comparatively small business like Bionomics to succeed in the global marketplace. By working with multinationals, the company can concentrate on drug discovery while larger entities handle the capital-intensive stages of the development process.

“Bionomics does deals on a selective basis,” says Deborah.

“So we build those partnerships when our drugs either reach a certain stage where we feel strategically it would be best to bring in a much larger company with deep pockets and more expertise – for example in phase three clinical development, and for getting regulatory approvals through the FDA and other bodies, and then doing the marketing.

“That’s what the big pharmaceutical companies are really meant to do, and we supply a lot of the innovation.” 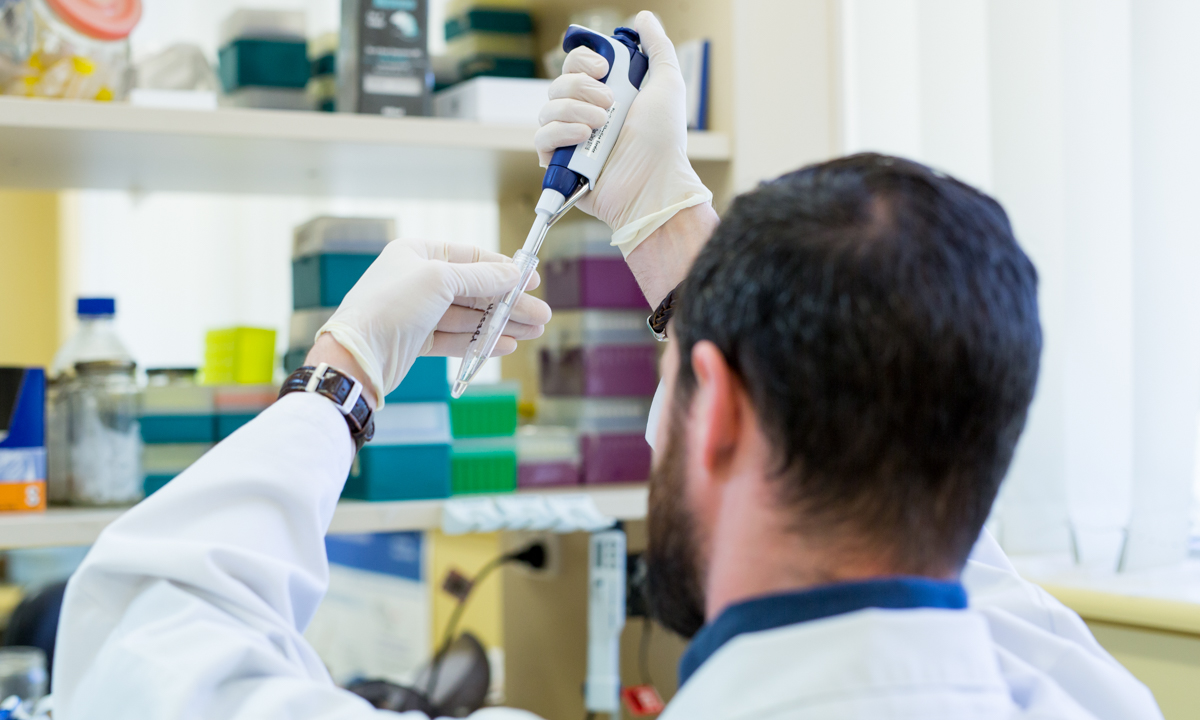 Bionomics’ current partnerships include two separate deals with the international giant Merck & Co., Inc, which has a market capitalisation of USD$170 billion – roughly ten times that of Bionomics.

As well as building these deals to enable the ongoing development of Bionomics’ discoveries, Deborah has also been creating global investment interest in the company. This has been a key plank of the company’s growth trajectory, as Australia’s relatively small investment market would not have been capable of providing the funds required to fuel the company’s evolution.

“Within the Bionomics share registry we have quite a range of investors,” says Deborah.

“I think that the… industry can sit alongside other high tech industries – like the defence industry here in SA.”

“We have everyday people who are really fascinated by the work the company does, but are not really technically trained. And then we have the other spectrum where we have some very high profile institutions here in Australia and in the US and in the UK, and they are very knowledgeable about the science and about what it takes to build a biotech company.

“One of our investors in San Francisco has been investing in biotech companies for probably about the last 25 years – you know, managing billions of dollars of funds.”

Thanks to all these manoeuvres Bionomics is now truly global. While its Adelaide headquarters in Thebarton has a staff of about 54 on site, an almost equal number of employees can be found throughout the rest of Australia and in the US, UK and Europe.

Achieving this level of success in a sector – health and medical research –  that is only in its infancy in Australia is particularly challenging.

Bionomics’ progress is something our state and federal governments hope many more companies will replicate as Australia’s economy becomes more reliant on intellectual property than physical goods. And there are a few existing systems that have helped the company grow, which Deborah says could be key as the sector develops.

One of these core supports is the already-established network of complementary businesses and institutions in Adelaide.

“What we find here is that we have businesses who can help us with parts of our business,” says Deborah. 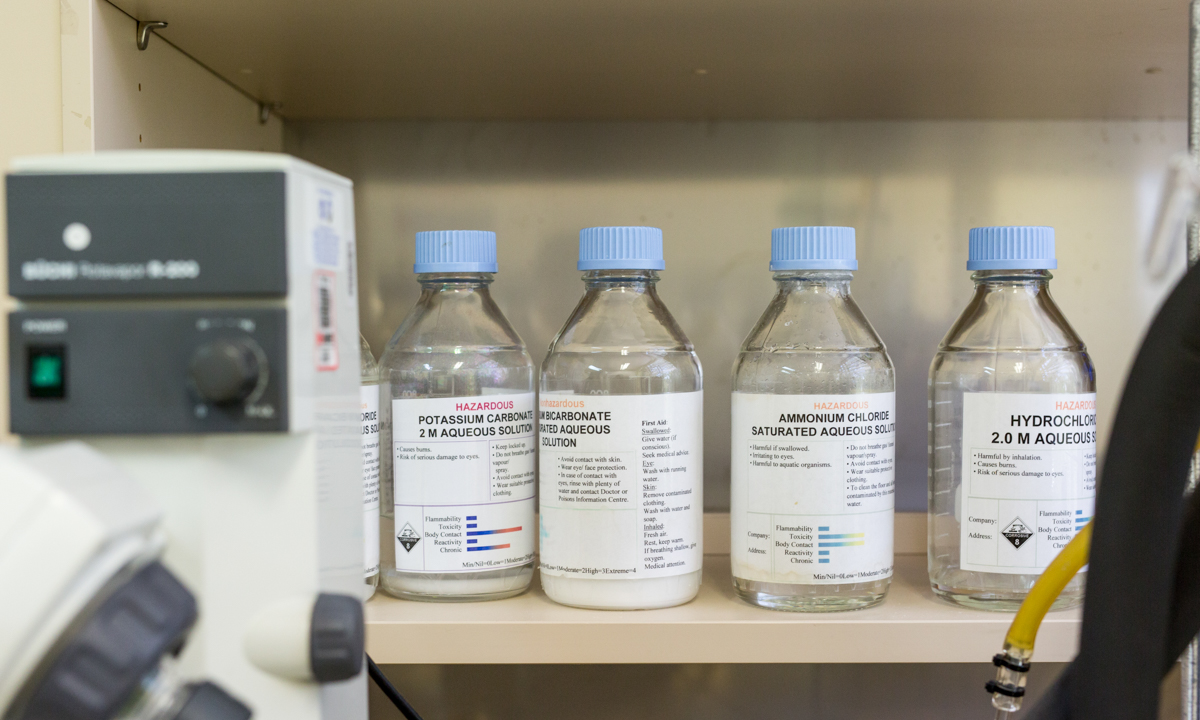 Hazardous. Do not swallow.

“So, running clinical trials for example, doing analysis on clinical trial samples, helping us with drug storage and logistics. We have an FDA-inspected group that we work with here in Adelaide that manage our drug logistics for our clinical trials.

“We can access formulation expertise here in Adelaide as well… And then you have service providers like patent attorneys – we’re pretty well serviced in Adelaide.”

“It can lead to very useful interactions and for a company like Bionomics it can give access to that latest academic thought and research in an area that is so rapidly moving – oncology, and in neuroscience,” says Deborah.

There are also a suite of current tax incentives and funds provided by government that Deborah believes are playing a strong role in helping to build the industry by addressing what is often called the “Valley of Death”.

The evocative name refers to a period in the development of a drug that falls between the exciting moment of discovery and proof of concept in the laboratory and the beginning of clinical trials in humans.

“So, it’s how do you fill that funding gap?,” says Deborah.  “And now the [Federal] Government has got a few innovations in the wings.”

The Research and Development Tax Incentive offers a tax offset of up to 43.5 per cent for businesses engaged in innovative developments, something Deborah says “provides an avenue for eligible companies to get that extra cash boost to carry them over the Valley of Death to the other side where they’re more investment ready”.

The biomedical translation fund, a $500 million investment pool powered by Commonwealth and private money that will be meted out to help translate discoveries into commercial successes, is another measure Deborah identifies as a positive step.

She also sees the growth of other knowledge-intensive local industries as a factor that could help support a future where companies like Bionomics are the norm in the Australian economy. 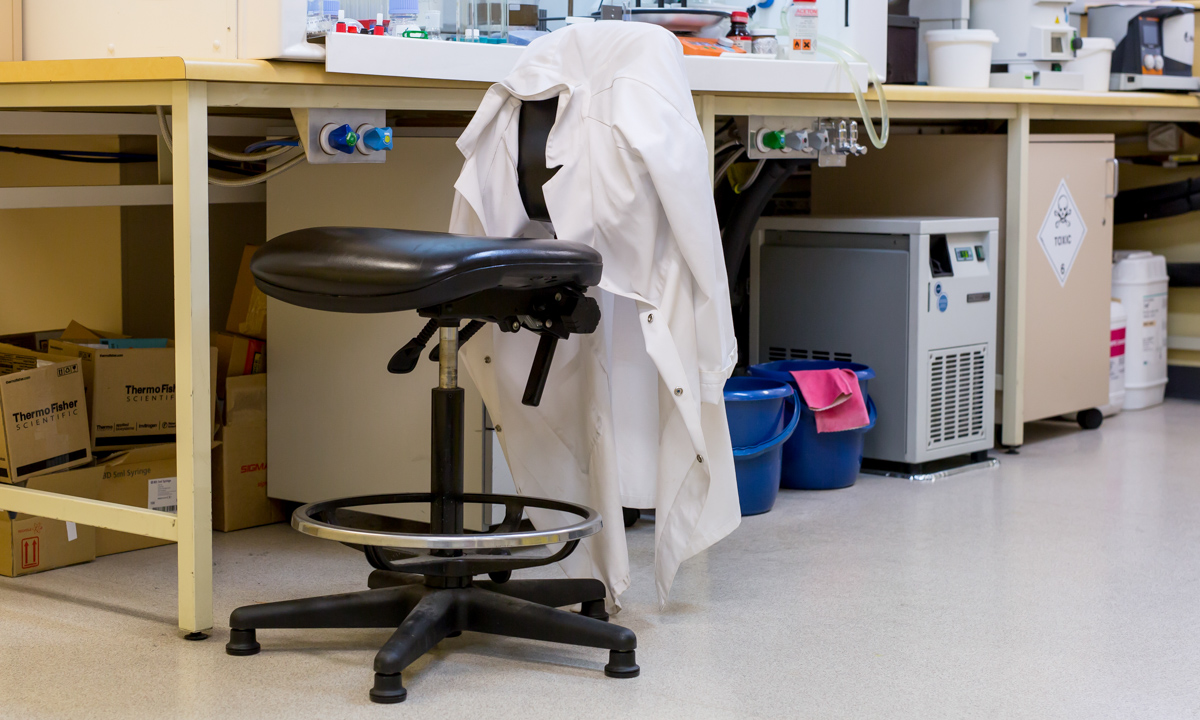 The lab coat: A universal symbol that science waz ere

“But I think that the biopharmaceutical industry can sit alongside other high tech industries – like the defence industry here in SA, and become a very important part of our economic mix.”

But even while these industry-enhancing initiatives are still solidifying, Bionomics is plowing ahead with its own progress.

A milestone payment from Merck is due to hit the company coffers soon, when a drug designed to help treat Alzheimer’s Disease enters its first stage of clinical trials. The discoveryinvolved is an aspect of Bionomics work that has attracted a lot of attention because it has the potential to satisfy a glaring unmet medical need.

“It’s one of the most difficult illnesses to try and treat,” says Deborah. “There are a couple of drugs that are approved for Alzheimer’s Disease and they do work for a short period of time at slowing the memory decline.

“But there’s nothing that has come forward recently from a lot of investment by pharmaceutical companies in this area. So of course we’re hoping that our drug will be the one that makes it through.”

There are big milestones on the horizon for some of Bionomics’ other discoveries too. A trial conducted in several different countries involving 192 people with post-traumatic stress disorder is being set-up to test the anxiety-related BNC 210, and read outs from a trial of the drug BNC 101’s effectiveness in colon cancer are due this year too.

And so, steadily, Bionomics will continue to make itself more and more convincingly an Adelaide-based global company and as it does that, it will also provide an example many others can aspire to follow.