Applying the Burger Theory in Melbourne

Moving against the grain, Burger Theory's Rob Dean and Dan Mendelson are proving Adelaide's mettle as a business testing ground by opening their first interstate outlet in Melbourne's CBD this week. 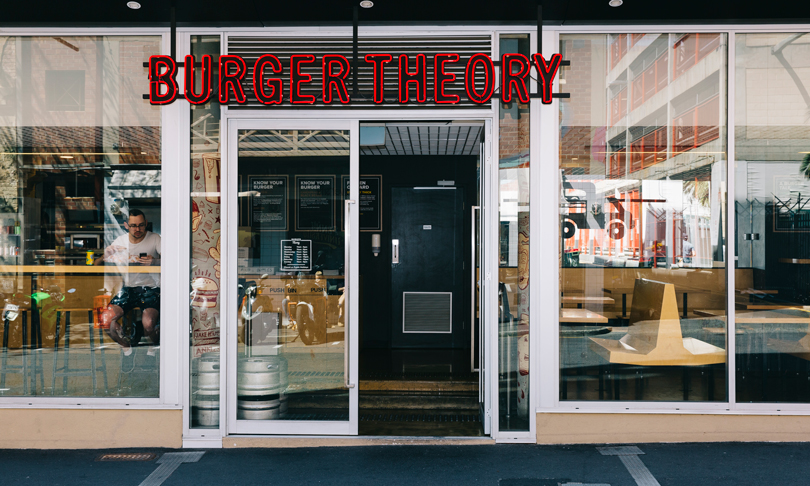 It started out as the first CBD food truck, became a suburban diner and then a bricks and mortar store in the East End. Now, Burger Theory is evolving once more – and this time co-owners Rob Dean and Dan Mendelson are looking interstate.

Burger Theory opens at 293A La Trobe Street, Melbourne this Thursday. They will be open 11am – 3pm and 5pm – 9pm, Monday to Saturday.

The pair are partnering with Tuxedo Cat proprietors Cass Tombs and Bryan Lynagh to set up shop in the Old Duke of Kent Hotel on La Trobe Street in Melbourne’s CBD.

Opening this Thursday, the Melbourne Burger Theory will trade alongside a pub-like venue being run by Cass and Bryan in the old building.

Rob says national expansion was always part of the plan for Burger Theory.

“The model we’ve built is one that is designed to be run in other places and by other people. It’s a volume model,” he says.

That being said, both Rob and Dan have been incredibly hands-on with the Melbourne outlet. Dan has been living in Melbourne for months and will remain there until the end of the year, and Rob has been travelling back-and-forth to help with the shop-fit.

Featuring several elements that were considered for the East End outlet but not realised there, Rob says the Melbourne shop is a chance to put into practice the things the pair have learned from years in business.

‘The big thing is the meat grinder – that will be on display,” says Rob. “We were going to do it here and we chickened out – we thought people might not want to see it. But, I wish we’d done it because it’s important for people to know that we buy super high quality meat and grind it fresh, which is different to what most places do.

“So there will be a meat on display like at a butcher shop and the grinding will be happening behind it.”

With a menu very similar to Burger Theory’s Adelaide offering, Rob and Dan hope they will achieve cut-through in the close-to-saturated Melbourne market by sticking with the same focus they’ve always had – good food.

“The funny thing in Melbourne is that every burger joint has a gimmick – there’s one in a train there’s one that’s all fitted out with computer graphics. But we’re all about the food and the quality of the food,” says Rob.

“We use meat from Richard Gunner. The price of meat has gone up 40 per cent in the last year. I spoke to him on the phone the other day, and the price has actually gone up 65 per cent for him – so he’s absorbing 25 per cent.

“But people are taking shortcuts all over the place – hormones is the main thing, if you inject growth hormones you can get the cow to grow 30 per cent quicker and your prices go down by 30 per cent. Gunner said he doesn’t want to do that, and there are a whole lot of other things that are also important to us – so we’re sticking with him.”

Rob and Dan are also in the midst of setting up shop – both a burger outlet and a licensed bar – at Flinders University. This makes the possibility of a future where you never have to travel more than 15 minutes to get a Burger Theory burger seem just that little bit more likely.