Architect Erin Crowden has just celebrated 10 years at leading Adelaide firm Williams Burton Leopardi and shows CityMag through one of her favourite projects while discussing some of the realities of the architecture profession in 2020.

CityMag has gotten into trouble before for calling a person who designs buildings an architect, when they were not officially a ‘registered architect’ and so we check.

This architecture feature was made in association with the Australian Institute of Architects as a way to highlight the profession and its professionals. If you’d like more information about engaging an architect for your own project, the institute’s website is a great resource.

We’re sitting in the materials library of Williams Burton Leopardi’s stunning Darling Building at the corner of Franklin and Bentham Street in the middle of the city. The space epitomises what has become somewhat of a specialty in Adelaide – adaptive reuse.

The award winning building and project that was spearheaded by WBL defines the other end of the design scale to a project like SAHMRI on North Terrace, which is bold and marvellous.

The Darling Building is in many ways a better demonstration of the power of excellent architecture as it was spearheaded and paid for by the architects themselves and had to work within the confines of the building’s existing footprint and heritage status.

“The motto for this building was that we do as much as is necessary and as little as possible,” says Erin.

Erin is in her 30s, with a young family and managing a burgeoning career as an architect. She joined WBL 10 years ago this month and says WBL is where she always knew she wanted to be.

“I got a call from Rob [Williams – principal at WBL] a couple of weeks after my interview – that I thought I’d stuffed up – to say I had the job. I almost fell off my seat.

But architecture isn’t all glamorous offices and award-winning projects. It’s an incredible slog. Erin says that one of her first projects as a lead architect took years to complete and that traditionally the profession has been defined by long working hours.

“That’s something I was given a very wise piece of advice – by a male – when I first started working with WB [before Sophie Leopardi joined as partner] and that was to, ‘accurately record all the time you spend on your jobs and only spend the time that you should be spending on them. After that, you stop.'”

Erin tells us it was an unusual piece of advice, but one she adopted and is so thankful for now, as being a young mother adds extra time pressures to her life. But Erin says WBL has been the absolute best place to do both, and describes Sophie Leopardi – with her own family – as an inspiration.

Prior to Sophie, Erin says no other women had come back from maternity leave. She says each had their own reason, and that there were a variety of reasons why those people didn’t come back to work, but to see Sophie return and to continue to lead the company paved the way for her to do the same.

This realisation was nowhere stronger than on site at the beautiful Malvern Residence (pictured), which WBL was undertaking alterations and additions work on the beautiful bluestone house. Erin worked on the project right from concept sketches through to handover – a period of time that spanned almost both of her pregnancies. 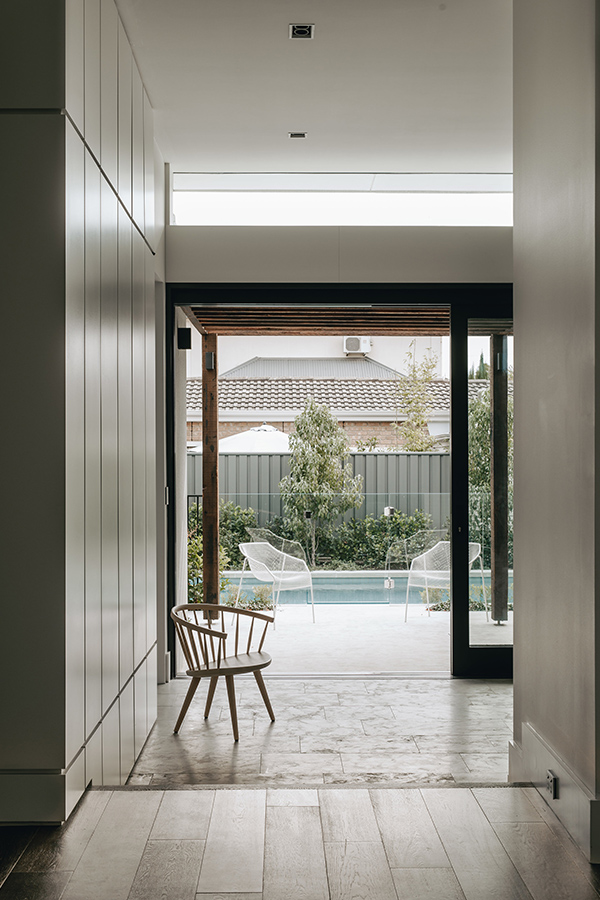 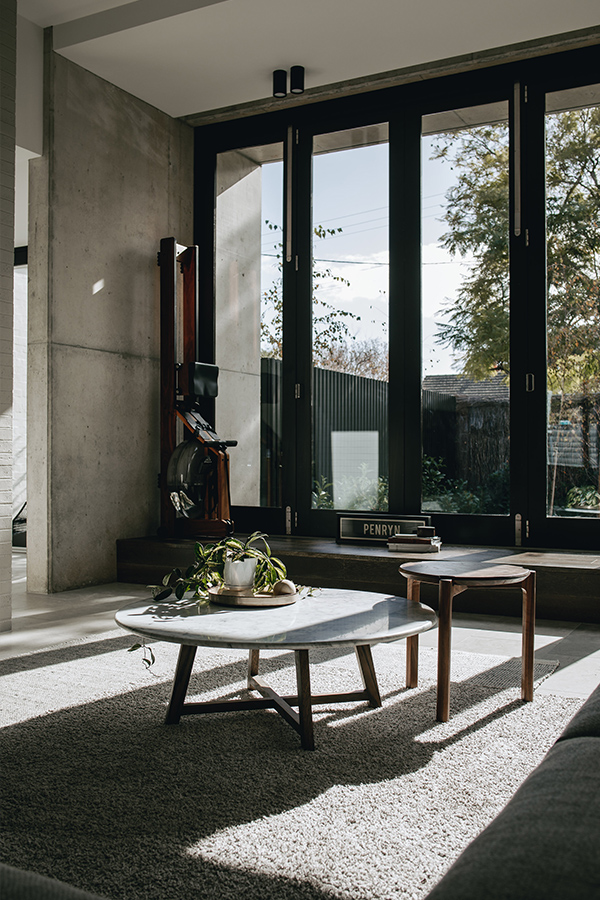 The generous proportions and the play of winter light through large bi-fold doors on the northern side of Malvern Residence. Photo – Christopher Morrison

“I have really vivid memories of going to site with Tilly – my daughter – being eight weeks old or something, strapped to my chest with massive ear muffs on that were bigger than her head, and trying to rock and bounce with her, while I was trying to draw a detail on the wall for the builder.

“The client was there going, ‘If you need to heat up any bottles, or if you need to breast feed, please, you can do it, it’s fine in our house!’”

Erin says the project was a success (multi-award winning at the 2019 Australian Institute of Architects and other peak body awards) because of those clients and the rapport they built together.

“They trusted us, but they very clearly let us know what they did and didn’t like – right from the beginning,” says Erin. “They were really honest and up front with us.” 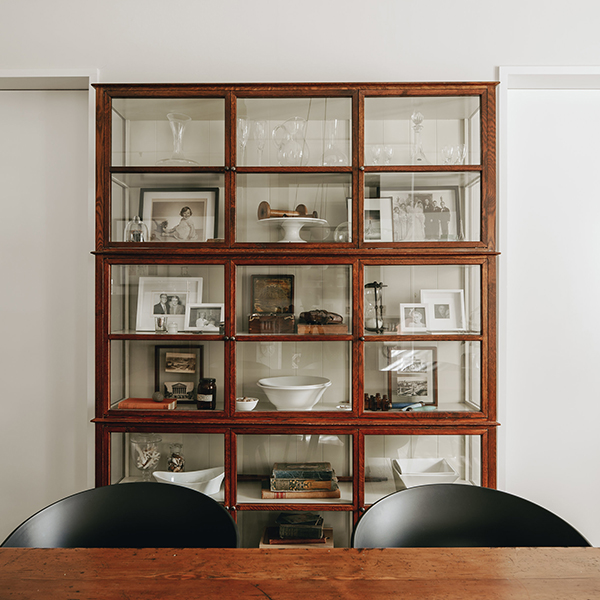 “The family had an existing piece of furniture – an antique – that sat in their dining room, which is where we used to have our meetings when we went to our house. It’s something they loved and had beautifully curated this antique cabinet with different items.

“When we started talking through ideas for the kitchen and how we were going to integrate the feeling of the new with the old and that the addition was talking to what pre-dates the addition, that cabinet that we were staring at each time we met with the client became an excellent reference point for some of the detail and joinery in the kitchen. That piece sits in the dining room and acts as the bridge between the old and the new. 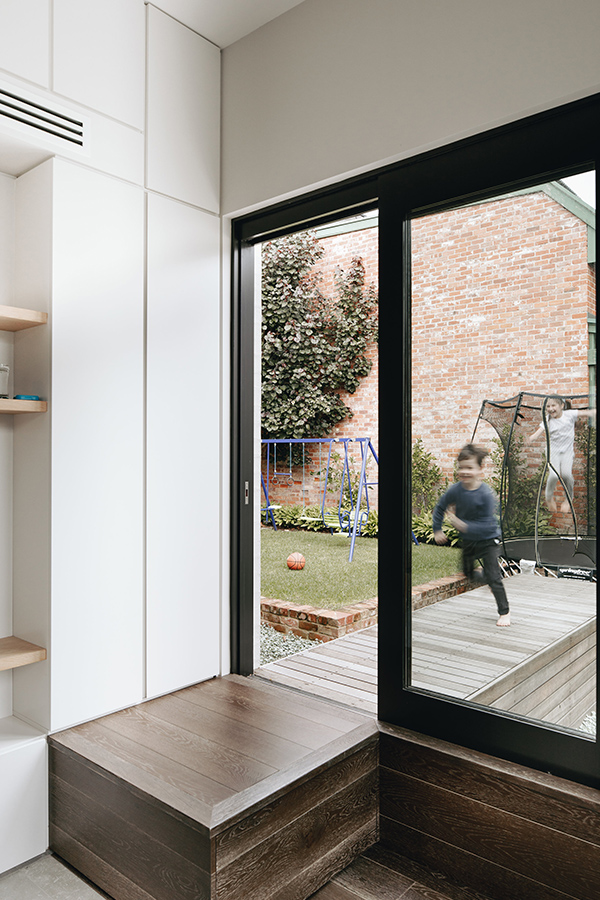 “The photo we’ve got of their son, blurry, as he’s running through from outside inside, that moment happened multiple times. That wasn’t staged. That was literally that little boy showing us, ‘Look, I can run from here and jump straight onto the trampoline from the edge of the jetty and jump off the trampoline and straight back inside to the playroom.’

“I love the living room with the exposed concrete and how that sits with the fireplace. How that then sits with the rowing machine that the client has. That’s the only piece of fitness equipment we’ve allowed to stay in a home for the photos. But I love the composition of that room and how everything sits so nicely through there.

It’s clear to CityMag that Erin feels a deep connection to this place she’s helped imagine into existence. Even beyond its lifespan as a project, Erin has stayed in touch with her clients and returned to the site on occasion, where she’s noticed smaller details that give her joy.

And throughout our conversation this architect is always sure to convey how privileged she feels to be in her role and to say such things as, “If someone’s not supportive of you trying to start a family, that’s ridiculous and they should not be in business,” but this burgeoning confidence is all down to her authentic and humble approach to the work.

“I’m a huge believer in the one-per-centers,” says Erin. “You don’t need to be better than other people, you just need to always be one per cent better than you were.”

It’s this philosophy – as well as well-trained eye for aesthetic beauty – that keeps Williams Burton Leopardi at the top of their game.