A new development on Iparrityi Whitmore Square will offer spacious apartment living and highly considered design in the southwestern quarter of the city.

Apartments are currently on sale 58 Iparrityi.
For more information and to enquire, visit the website.

The project, called 58 Iparrityi (after the Kaurna woman from whom the adjacent square gets its name), is being developed by local company Studio Simpatico and designed by Enzo Caroscio Architecture.

There will be retail and hospitality space on the ground floor of the building and 11 residences above.

Penthouses will be available on levels six and seven and every other residential level will have two 100sqm homes, each featuring two bedrooms and two bathrooms.

Design is paramount in all facets of the development, with Studio Simpatico founder Melissa Pisanelli saying, “It’s important to us to create something that’s not an investor product; they’re designed to be lived in.”

The bathrooms will feature premium Caroma fittings and fixtures, as well as bespoke basins created by Adelaide ceramicist Sam Faehrmann.

The connection to craft continues outside the apartments, with Studio Simpatico commissioning six local artists to create works for each lobby floor “that either interprets the design of the building or Iparrityi, the square itself, or the heritage of the area,” says Studio Simpatico co-founder Federico Pisanelli.

West-facing apartments in the development will feature a loggia, which is a large-format outdoor area, fit for entertaining and private leisure. East-facing apartments have a more conventional balcony, and the southern façade features Juliet balconies. 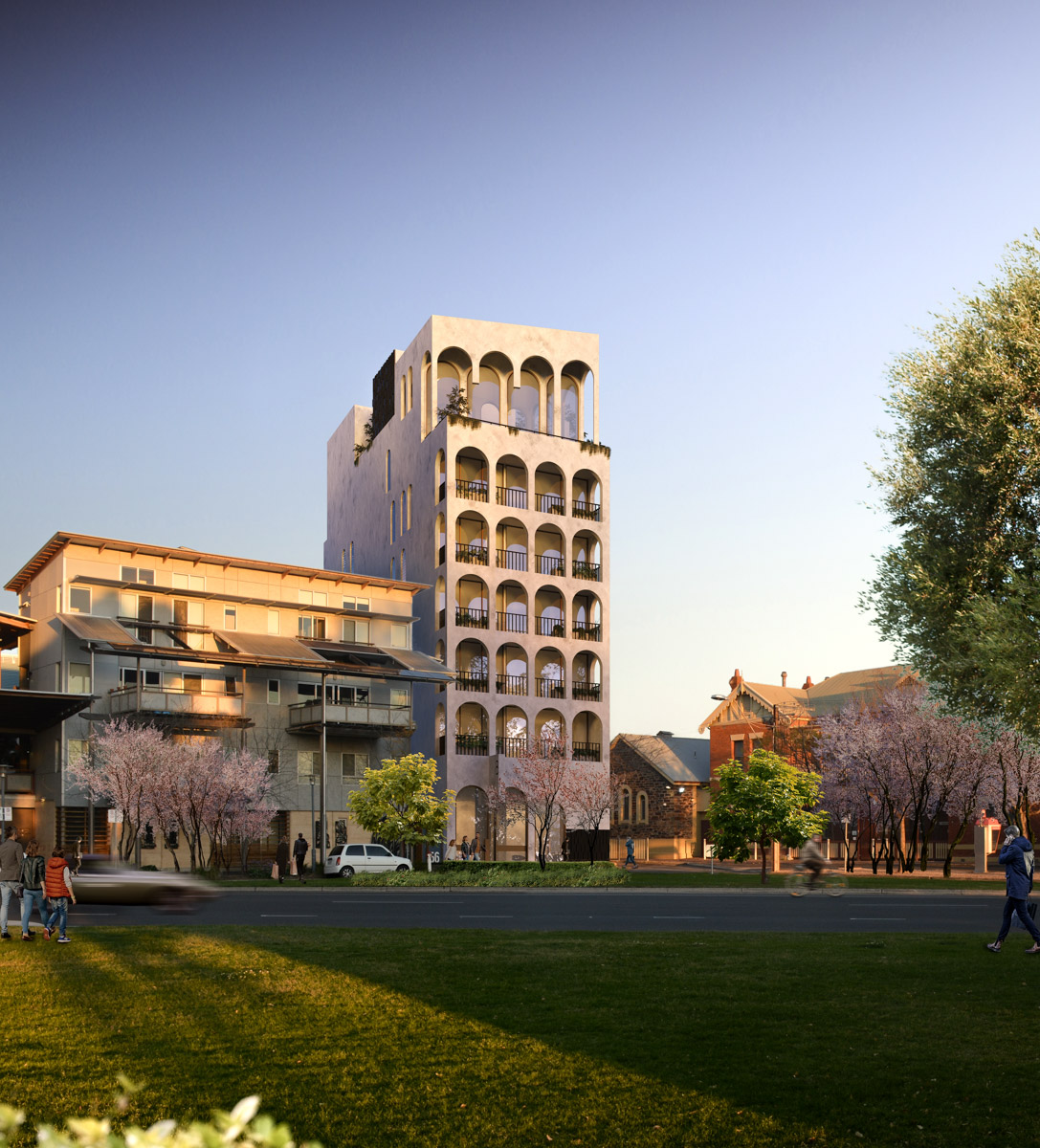 The building will be a striking addition to the built environment surrounding Iparrityi Whitmore Square, with the project drawing influence from European brutalist architecture.

Studio Simpatico’s founders referenced two buildings in particular as inspiration for the project when discussing the brief with architect Enzo Caroscio.

“There’s one architect, whose name is Xavier Corberó, and he built his own residence, workshop over a few decades. That was one of the catalysts for the design. And then the other one was the Colosseo Quadrato, which is the Palazzo della Civiltá Italiana, which is a Mussolini-commissioned building that reflects rationalist design,” Federico says.

“They were the two main figures that really drove the brief, and that was the direction we wanted to go, to create something that was architecturally different from around here, but still sympathised with a lot of the heritage that’s in the area.”

Enzo describes his architecture firm as contemporary and says his team are “not traditionalists or revivalists”, and so 58 Iparrityi features a modern take on the concrete-heavy brutalist aesthetic.

“If you look at traditional brutalism, it’s more rectilinear, but then… the arch really helped soften the architecture a bit. I think it gave it more of that residential, homey feel to it,” Enzo says.

“The front’s still traditional, but we’ve got a twist at the top, and then on the side we play around with different shapes and openings and stepping and things like that.”

The building’s western façade faces out onto Iparrityi Whitmore Square, which created a design challenge for Enzo in managing the heat load that comes with this orientation.

“That’s why we’ve got the continuous balcony and the colonnade to the west… That helped create the shadows and the depth to the building façade,” he says.

Melissa and Federico see 58 Iparrityi’s quality of design as the major selling point of the development, but they’re also strong proponents if city living, particularly in Adelaide’s west.

“We’ve always loved this side of town,” says Melissa, who, along with Federico, also owns and operates hospitality establishments Etica and Allegra Dining Room.

“We’ve always seen the potential, and we love the fact it’s like a neighbourhood in the city. We love that it’s a little bit quiet, still in the CBD, but far away enough from the hustle and bustle.

“We’ve got the Parklands just around the corner; I love Veale Gardens. Forward thinking, if you have a family, there’s Princess Elizabeth playground. I think this spot is just so unique. We’re so close to the Markets, just that sort of thing as well.”

58 Iparrityi residents will have city-living benefits of their own, with the completed development also including communal access to a Mercedes-Benz EQA electric vehicle. 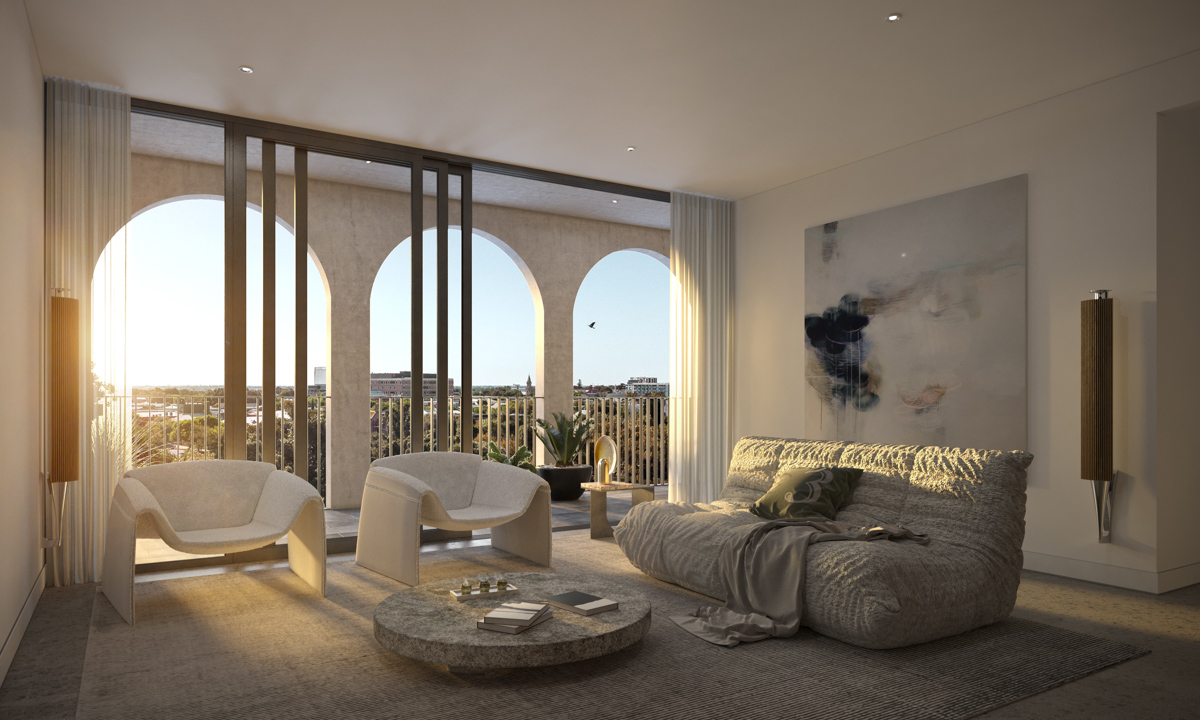 South Australia is known as a state with a love for a big backyard, and this is reflected in the city and North Adelaide’s residential population, which was just over 22,000 people at last census count.

Federico says over the last decade operating a restaurant in the city he has seen a shift in mentality amongst the Adelaide community towards city living, including those who have returned to the state from further afield over the last 12 months.

“The way people view the city, particularly this part of the city, has changed dramatically from our experience, just by chatting with clientele, and it’s interesting seeing people return from interstate or overseas and wanting to live in the city, but also Adelaide-wide as well,” he says.

Apartments within 58 Iparrityi are on sale now, and construction is expected to begin in October 2021. For more information and to enquire about purchasing, see the website.