Adelaideans are flocking to the Palestine Center for Peace

Amid the 11 days of Israeli airstrikes in Gaza, Frome Street's Palestine Center for Peace sold out of keffiyehs - the Palestinian scarf that has come to stand as a symbol of resistance and national pride for Palestinian people.

For Enaam Oudih and other Palestinians, the keffiyeh is an object of national pride.

“The keffiyeh is a symbol of our identity and ethnicity for Palestinians, and allows those who wear it to not forget who they are and where they come from,” says Enaam, who is the chairperson of Glimmer of Hope, an Adelaide-based community organisation celebrating Palestinian culture.

A chequered fabric, the keffiyeh is usually folded in half and worn across the forehead.

Aside from its physical utility, it has come to represent Palestinian resistance against oppression.

Frome Street’s Palestine Center for Peace stocks keffiyehs as part of its retail offering, and throughout the 11-day bombing campaign in Gaza earlier this month, the shop sold all 183 Palestinian-made keffiyehs it had in stock.

The keffiyeh worn around the neck of a speaker at a Glimmer Of Hope resistance event.

Christa Christka is a secretary at Australian Friends of Palestine, the group that runs the Palestine Center for Peace, and she says there has been “significant” interest in the organisation since the attacks began on 10 May.

“People want a visible expression of their solidarity.”

The bottom level of the Palestine Center For Peace stocks a range of Palestinian-made goods, such as ceramic bowls brandished with ‘Jerusalem’ and ‘Bethlehem’ logos, as well as ‘Cook for Palestine’ aprons and ‘Free Palestine’ tote bags.

Upstairs, the Australian Friends of Palestine is coordinating its next move to aid the people living in Gaza, which could include lobbying politicians, organising fundraisers or managing medical trips.

Enaam migrated to South Australia 30 years ago on a skilled migrant visa and says hearing news reports of the 11 days of fighting, which resulting in 230 Palestinian and 12 Israeli deaths, has been like a “double whammy”.

“One, it’s on a personal level; and the other is a humanity level,” she says.

“We are a small growing community, but we are against the discriminatory system and apartheid this country [Israel] is imposing.”

The recent attacks in Gaza are the latest in decades of conflict between the two populations, and occurred, according to United Nations Secretary-General António Guterres, after Palestinian families in the occupied West Bank of Gaza were threatened with eviction by Israel. 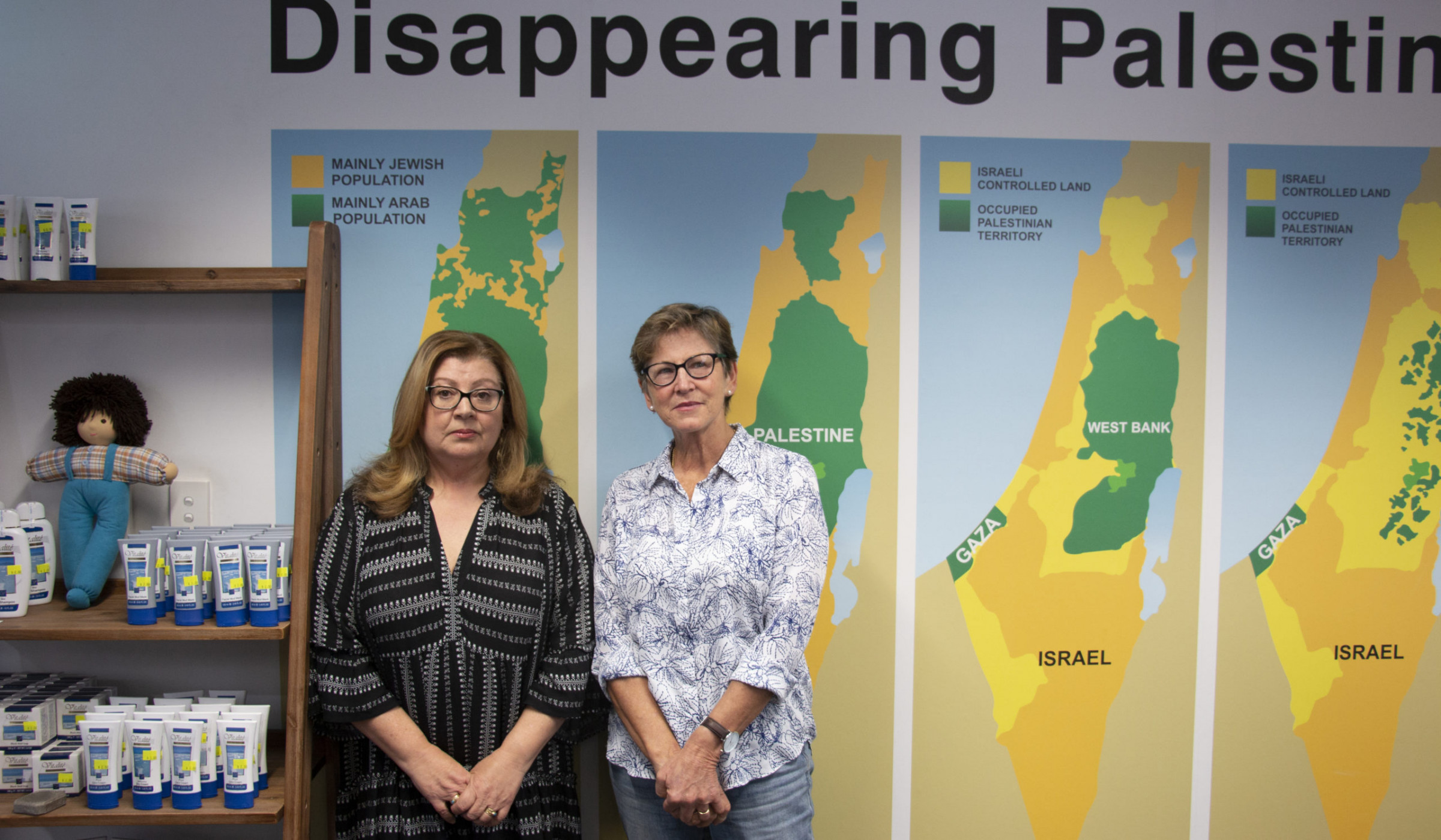 Edie Bransbury, also a secretary of Australian Friends of Palestine, says South Australians should care about these events occurring on the other side of the world because “the plan is that people disappear and land is gone.”

“This is the third major offensive against the Gazans,” she says. “Two million people in an area that is the size of greater Adelaide. They are just living amongst rubble, and they’ve just had more rubble added to it.”

Enaam says there are roughly 100 families involved in Glimmer of Hope, and in spite of the contemporary trauma, they still want to “give people support”.

“This includes the opportunity to practice our culture, revisit our language, food and dance,” she says.

“I have an auntie who went through a much more difficult time [than me] where their land was taken away from them, and they were given just a different land that didn’t have the same value.

“Throughout this experience, you learn a lot more about what is safe, what is not safe. I became much more proud of being Palestinian in Australia than back home, because it feels safer here.”