CityMag brought together a panel of local experts to advise us on how Adelaide will evolve over the next 25 years architecturally, socially and culturally. 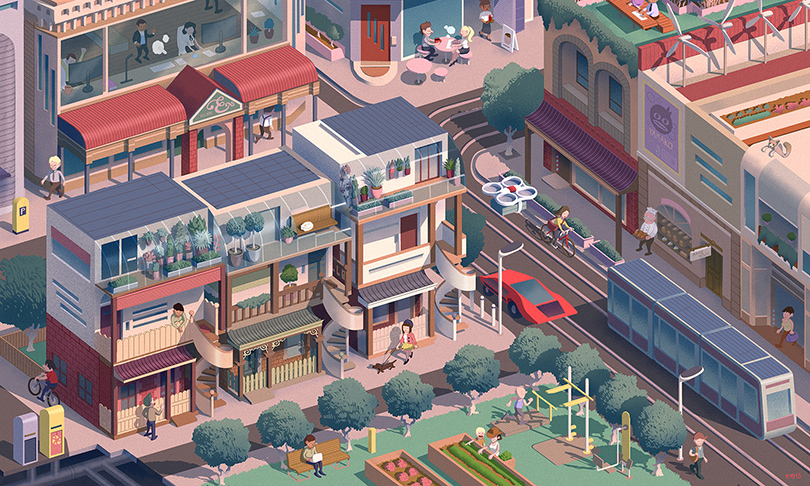 See a larger version of the full illustration here.

1) Rooftops will become the homes of urban bee hives and community gardens, says the Property Council of Australia – SA Division.

CityMag also canvassed the future of South Australia’s economy. Click here to read about where we’re headed in 2040.

2) Residents and local workers will have a say in designing shared space and furniture that best suits their local needs, predicts CityMag.

3) Traditional physical workplaces will be superseded by “communal work villages, close to people’s residences” that resemble flight lounges, according to Schiavello Systems.

4) Shopfronts of the future will be people-centric and focused on personalised service as an antidote to our digital lives, says the Property Council of Australia – SA Division.

5) Parking meters will not only manage the storage of driverless cars, they will double as wireless car and device chargers and WiFi transmitters, says CityMag.

6) Adelaide’s heritage-protected miners’ cottages will be updated to create a ‘future heritage’ with the addition of independent dwellings above, says CityMag.

7) Centralised waste collection services will remove rubbish and recycling instantaneously via an underground vacuum network, according to the Adelaide City Council.

9) Thanks to the ability to collaborate and hang out virtually, people’s lives will be lived in a smaller footprint – promoting a return to the ‘corner store mentality’, predicts DASH Architects.

11) Energy generation will be de-centralised and integrated into cities, says CityMag.

12) Delivery drones will liaise via the internet of things to avoid collisions, says CityMag.

13) While retail will remain traditional in its service, it will have modern twists like seamless payment methods that work as you leave the store, says the Property Council of Australia – SA Division.

14) Light rail will be the ubiquitous intra-city transport of the future, says the Property Council of Australia – SA Division.

15) Work hours will be less regimented as employees log hours and all time spent thinking about work through wearable, integrated technologies, according to Schiavello Systems.

16) Space will be scarce, so the public realm will be used functionally for things like agriculture and exercise, says the Australian Institute of Landscape Architects SA.