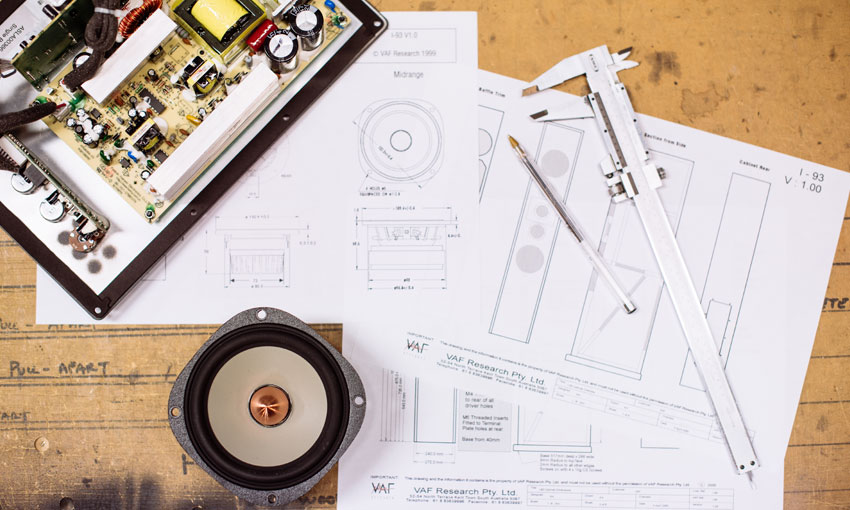 Philip Vafiadis traces the genesis of VAF Research all the way back to his childhood.

“I used to mess around with all kinds of things,” he says. “And one of those was whipping speakers out of transistor radios and putting horns on them, because you could get more sound out of the tiny little speaker that way.”

That desire to toy with audio systems culminated in a costly enterprise Phil undertook whilst still a teenager. Constructing a kit speaker set from a magazine, Phil spared no expense (even importing high density board from Europe) all in an attempt to improve the quality of the kit as much as possible. When said speaker was tested, and the quality found to be wanting, Phil was crushed.

“I knew I’d done a good job, I know I’d absolutely followed the instructions, and I felt ripped off,” says Phil. “It wasn’t about business until many years later. At the time, I just felt ripped off, and I thought I could do better, so I just fostered that interest.” That experience, infuriating as it was, would go on to inspire Phil to found VAF Research, designer of some of the highest quality loudspeakers on the planet, in 1978.

The quality of the speakers VAF now produces is so high that they’re regularly relied upon for a multitude of purposes far beyond broadcasting music.

They’ve been used in Radio Acoustic Sound Systems – weather stations that blast low frequency sounds 8km into the atmosphere. Three hundred of VAF’s loudspeakers went into the Adelaide Festival Theatre’s ElectroAcoustic sound system, at the time the largest in the world.
And there’s also the Telstra WayPhone. “The WayPhone project was interesting, because back then Telstra used to make stuff,” Phil says, with something like a wistful smile. “The WayPhone was one of those things.”

You’ve probably seen a few WayPhones, perhaps whilst travelling to the Barossa along the Northern Expressway. Incorporating a cast-magnesium chassis, carbon fibre drivers, and a 32-bit floating point processor well beyond what’s normally required in a simple telephone; the WayPhone is an appropriately durable piece of civic infrastructure for the Australian wilderness.

That desire to have an emergency phone that could survive everything, from constant desert heat to being hit by a truck, extended to the WayPhone’s audio systems, so Telstra reached out to VAF Research. For VAF, this was more than just an opportunity to make some money – it was a turning point in the company’s trajectory. Most specialist audio companies don’t have the time or the resources to purchase testing equipment, but suddenly VAF wasn’t one of them.

“That consulting work actually gave us the ability to buy some gear, some serious gear. And that meant that we could actually test things and understand what was happening, as opposed to a process of trial and error and just using our ears,” says Phil. “The only way to make pure sound is to go back to basics, and deal with the fundamental physics. Everything else is… wrong.”

That ability to perfect the fundamentals of their Hi-Fi systems has informed the spirit of VAF Research’s entire design process where they strive to create speakers that, if you closed your eyes, you’d swear weren’t there at all.

“Our job isn’t to be part of the creative process; that’s what the musicians are for, what the filmmakers are for,” says Phil. “Our job is to create loudspeakers that do what they’re told; that reproduce exactly what has been produced.” From plans to reality, everything at VAF is carefully considered

It should come as no surprise, then, that VAF Research’s speakers have been so spectacularly well received, with customers as far away as the US, Singapore, Norway, and even some in Antarctica. Still, Phil thinks referring to VAF as a ‘global’ company misrepresents the way the company does business.

“We’ve been a direct seller for many years, so everyone has a one-to-one relationship with us,” he says. “It really doesn’t matter that you’re in Australia, or somewhere else, it’s really about building meaningful relationships that mean something to somebody else. It’s not complicated stuff.”