Adelaide has never had a strong reputation as a haven for game development; in fact our city has a history of making life somewhat difficult for the ludologically-inclined. But that hasn't disheartened Machine Spirit, whose first game, Amygdala, launches tomorrow. 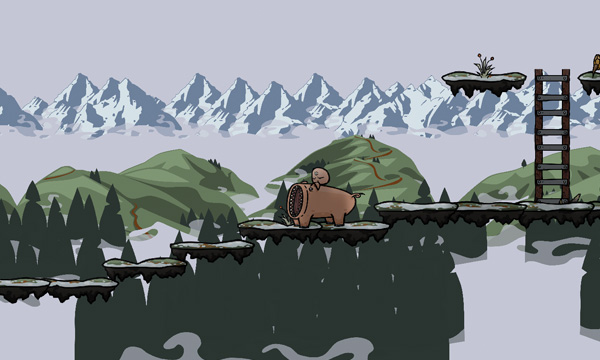 The story of Amygdala‘s conception goes some way to explaining the game’s surreal nature.

“I wanted to learn the Box2d physics engine and the libGDX deployment system,” says Ashton McAllan. These are, apparently, useful tools in game development that Ashton was interested in even before the idea of starting a games company like Machine Spirit came along.

Ashton thought the best way to learn was to put things into practice, and was in the midst of experimenting on a small project when a generic email callout for AVCon’s 2013 Indie Games Room arrived.

“I was like ‘Oh, this’ll be a laugh, I’ll put in one for this stupid game I’ve got with a disembodied head that was stolen by a wizard.’ But then I got an email back going ‘Yeah, that sounds great, come demo it in three months!’ and I went ‘Fuck!’.

Anything but cowed, Ashton enlisted partner Emily and friend Sam to work on the project as well. Dear reader, you cannot imagine a trio of busier people. Emily McAllan’s “main thing” as she puts it, is filmmaking, but she has ample experience with photography, graphic design, painting, and even jewellery. “Yeah, I have fingers in a lot of creative pies,” she says.

Sam Morris, meanwhile, tells me he works full time in a bar, and studies online. He also casually brings up the 18 hours per week he managed to spend on Amgydala‘s procedurally generated levels. Sam Morris is a busy guy.

As is Ashton, who worked full-time in IT until February.

“For eight months I was doing eight hours at work, two hours travel and six hours development on Amygdala at home. I was working a soul-killing desk job, and then it killed my soul, so I quit, “Ashton says.

Amygdala‘s style and tone are so unique, to describe it as ‘similar’ to another game could only ever be partially true. The closest comparison would perhaps be Edmund McMillen’s The Binding of Isaac, but that’s mostly  the art style; while The Binding of Isaac was dark, Amygdala‘s story just seems determined to bamboozle you with as much bizarre imagery as possible.

The game’s plot involves an elderly man answering his granddaughter’s question (“Why do you hate wizards?”) with a story; as a younger man, he had his body stolen by a wizard. He’s forced to jump through a portal to chase the wizard… and suddenly you’re a disembodied head, growing a telepathic third eye, and journeying through a series of increasingly surreal realms. A screenshot from Amygdala.

“The thing I love about that intro scene is that he’s telling the child a story that no-one else will believe,” says Ashton. “He’s not just a crazy dude, it’s a thing that actually happened to him,” says Emily. “But because he’s so old, he can’t quite remember the exact details of the story. He’ll go ‘Oh, actually, I didn’t go to London, I was in New York. That’s right, it was in New York.’ And the story just gets more outlandish every time.”

What’s really remarkable about Amygdala is not just its increasingly bizarre, exploratory platforming (that third eye will just not stop growing) but the fact that it exists at all.

South Australia has had something of a run of bad luck when it comes to its game developers, a phenomenom Machine Spirit refers to as the “Adelaide Curse”.

“The process in Adelaide appears to be ‘Start a game company, run for a couple of years, get bought out, run for another six months, get shut down,'” says Ashton. “Ratbag’s the classic example.”

Ratbag Games was formed in Adelaide in 1992, bought by Midway Studios in August 2005, and promptly shut down that December.

Historically, South Australia’s politicians haven’t looked too kindly on videogames either. Michael Atkinson, South Australia’s Attorney General from 2002 to 2010, single-handedly blocked legislation to introduce an R18+ rating for videogames in Australia on numerous occasions. And while Australia’s eastern states have programs specifically designed to foster the growth of a local games industry, it appears our State Government has no plans to do the same. Nevertheless, Machine Spirit are determined not to leave South Australia.

“It’s tempting, but that just exacerbates the problem,” says Emily. “If we go where the funding is, then the funding will never come to where we are.”

A screenshot from Amygdala.

Considering these factors it seems especially remarkable, ironic even, that the other people with a hand in Amygdala are from South Australia as well. The soundtrack, for instance, was composed by local musicians Julia Henning (frontwoman of the band of the same name) and Eli Green (drummer for Life Pilot and The Mark of Cain), who also produced all of the game’s sound effects. I’m told Julia also voices a number of the characters, including the young granddaughter. The elderly protagonist, incidentally, is voiced by Adelaide novelist Tony Brooks.

Work on the project hasn’t finished yet, with Julia and Eli still busy writing distinct music for each different realm in the game.

So – five realms, five wizards, five different unique musical tracks. Perhaps they can be released along with the rest of the free downloadable content Machine Spirit intend to produce – including extra, increasingly difficult levels, intended only to be viewed by players who have completed the main game and chosen to continue.

Amygdala launches October 17 at The Pad bar and lounge on Franklin Street.

See more, including the online leaderboard, on Machine Spirit’s website.

“Generally, you need a lot of community support to get through the Greenlight process,” says Ashton. “We need that community backing before we can get through the system, so we’ll apply for that after we launch.”

Somehow, CityMag don’t think finding community support for a locally-produced game will be difficult. For a project like Amygdala, it would certainly be well deserved.