QR code check-in is the most recent COVID reality we all must now become accustomed to. Here's an explainer on how to use the system. 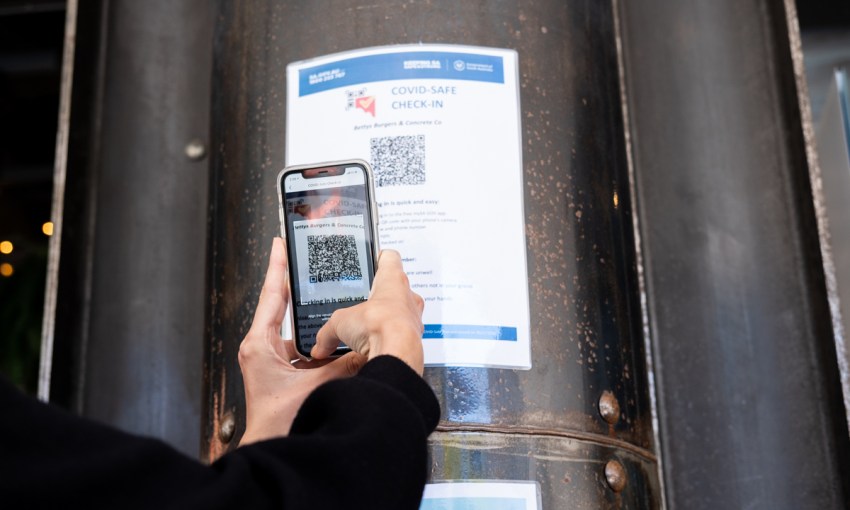 Some have been pleasant – like working from home in pyjamas – whereas others have required more getting used to.

The latest adaptation to our daily lives here in South Australia is a QR code check-in system for businesses and venues.

CityMag has been listening attentively to press conferences over the last week, and we’ve had some brief email exchanges with SAPOL, SA Health and the State Government, to get a better  understanding of how the system works.

If you feel like you need a primer, read on below.

The South Australian Government has updated its myGOV SA app, adding a little button at the bottom of the app’s screen that says “COVID-safe Check-in”.

Download the app (or update it if you had it previously), open it up, press that button, point your camera at the QR code posted at the entrance of the venue (or at the counter – wherever the business has located it) and fill in your first name, last name and phone number. Simple.

The first time you use the app, it will send you a verification code to make sure you’ve given your real number. From then on, the app will remember your details, for your convenience.

Do I have to use the app?
No, the Camera app on your phone will do the same job – essentially just sending you to a webpage to fill in the same details as above. The downside of using a generic QR reader instead of the myGOV SA app is you’ll have to put your details in every time.

When I first downloaded the mySA GOV app last week, it asked me to sign up using a driver’s licence and a vehicle registration form. Do I still need these?
No, the updated version of the app, which was finally released to Apple users on 2 December, does not require you to have an account to access the QR reader function.

To use the non-QR check in functions of the app, such as driver’s licence renewal, you’ll still need to sign in with those documents, but that’s a story for a different Q&A article.

Technology is scary – what if I don’t want to use my phone?
Every business with a COVID-safe plan in South Australia is mandated to not only make their State Government-issued QR code (distributed to businesses as part of their COVID-safe plan) accessible at their venue, but to also have a paper system in place for people who don’t carry smartphones. You can use this system.

For clarity, here’s Police Commissioner Grant Stevens speaking on the topic on Tuesday, 1 December:
“The requirement to use the South Australian Government QR code is mandatory for businesses, so I don’t see much point in running two systems.”

He then raised the point that a third-party QR code check-in system could be used by the developer to collect data which can then be sold on to whomever. Or, less harmfully, the venue you’re visiting could add you to their mailing list. Though you would hope they would at least ask permission first.

Is my data safer using the State Government-issued QR code?
The Police Commissioner says yes, but for now we can only take him at his word.

The QR system the State Government has put in place encrypts the data entered when you check in, meaning the venue you’re attending doesn’t even have access to it, and it’s stored “on the same secure portal that we hold child protection information,” Stevens said on Monday. The information can only be accessed by SA Health for contact tracing purposes, and will only be shared with SA Police in specific circumstances.

Here’s what Grant Stevens said on Monday:
“That data will not be handed over to police because there’s a suspicion of another crime having been committed. If the contact tracing team have a concern of a person breaching the directions under the emergency management act, it will be up to SA Health as to what information they provide us.”

Again, this is if we take SAPOL at their word. Better would be for there to be legislation in place to protect the information taken by the app and limit its potential uses, as some people are already arguing.

This is the case for the Federal Government’s COVIDSafe app (which still exists and wishes you would call once in a while).

Premier Steven Marshall has also said the details taken by the app will be erased after 28 days.

Can I be cheeky and enter fake details?
SA Health’s contact tracers would really prefer you didn’t. This is a system built to make their job easier, so, you know, try not to be mean to contact tracers.

But there are penalties for not checking in.

Grant Stevens said on Tuesday that if his crack team of COVID patrollers enters a venue and you are not able to demonstrate that you’ve checked in, “you may be liable to an expiation notice or some kind of education by police.” He did not give a dollar amount for the expiation notice or elaborate on what “education” would entail.

So there’s punishment for not checking in?
According to Stevens, yes. Expiation or “education”.

We’ve also seen the kind of outrage misleading contact tracers can unleash in the Premier, so for the benefit of his blood pressure and to not incur the wrath of the angry internet mob that bubbled up last time, use your real name and number.

What even is a QR code?
QR stands for ‘quick response’, but that doesn’t tell you much. It’s a two-dimensional barcode. A regular barcode, like on a cereal box, is scanned horizontally, whereas a QR code is read horizontally and vertically. It was developed in the ’90s for the Japanese automotive industry. I could tell you more, but there’s a whole Wikipedia page dedicated to it which will do a much more thorough job.

Are QR codes going to be a thing forever now?
They will be in place at least until South Australia’s emergency declaration is rescinded, and there has been no date announced as yet for when that will happen.

The Premier has also said the QR code system may be used beyond the declaration being rescinded, as part of a staged return to normality, once COVID-19 is brought under control through a widely distributed vaccine.

If your concerns are around privacy and freedom of movement, there is much more sophisticated tracking technology already available, compared with a web form loaded by a QR code.

Facial recognition technology is improving at a rapid rate, thanks to artificial intelligence. In China, ‘gait detection’ is being used in tandem with facial recognition, so as to identify people by the way they move in situations where they are obscuring their faces.

And here in Australia, we’re rolling out cameras with artificial intelligence software sophisticated enough to be able to detect when a someone is using a mobile phone while driving. Scary, right?

Is there anything else I should know?
I think that’s it. Please wear a mask in public.