Sharing and industry leadership are the new currency for power and influence in business. Adelaide businesspeople are leading the way at two innovation precincts being created to foster collaboration in high growth, deep tech industries.

Artisans dedicated to making the magic of movies have settled into a new home in a unique Adelaide location as part of a local initiative to build greater continuity of work for these talented professionals.

Artisan Post Group (APG) is led by Hollywood production veteran Michael Darren and seasoned local tech entrepreneurs, and brothers, Anton and Carlo Andreacchio, who have set up the group to provide centrally located facilities and a focus for sound and vision artisans who had previously been working across Adelaide in various locations.

APG has installed state-of-the-art post-production facilities and individual offices in the historic Eleanor Harrald Building overlooking leafy Frome Road. It is part of the Lot Fourteen ideas neighbourhood, being created by the state government at the former Royal Adelaide Hospital site.

Creative industries is one of four focus sectors at Lot Fourteen, along with defence and space, artificial intelligence, and cyber-security. This uniquely located, seven-hectare neighbourhood at the eastern end of North Terrace is bringing together people, like the members of APG, to share spaces, experiences and most of all ideas across technology and culture.

“This is a response to South Australia having great people doing great things,” says post supervisor and music composer Michael Darren. “We want to benefit our community and our industry.

“I lived and worked in Los Angeles for 10 years. You’re replaceable in LA. You can be fired one day and replaced the next.

“In Adelaide, you get to know everyone and you look out for each other.”

As Anton explains, there is a core team of 12 within the group that expands based on how much work is coming through. The artisans involved span disciplines including sound, post-production, editorial, filmmaking, visual effects, animation, virtual reality, augmented reality, colour grading, and music composition.

Michael says the group includes several young people who are starting out in their careers.

“Getting skills from courses is one thing,” he says. “We can help people with that last twenty per cent, so that they can go from being skilled to being artisanal, and we lead by example. Right now, we have young people working directly with a director and a producer from Los Angeles, who are out here finishing their feature film.”

A major focus for the APG leaders is securing continuity of work in an industry that is based on short-term projects.

“We are trying to be an entrepreneurial force to attract more projects,” Anton says.  “It’s incredible how much demand there is for post-production in Australia, we already have work lined up until mid-next year, and we’re now looking at how we increase capacity.”

Some of APG’s recent projects include The Hunting, a confronting drama which screened on SBS TV in August. It was created by local South Australian company Closer Productions and was filmed in Adelaide, with post-production shared with another local company, Kojo.

APG has also produced a virtual reality experience of the 2018 AFL Grand Final and is embarking on the TV series, Stateless, with executive producer Cate Blanchett for Matchbox Pictures.

The power of more is also being harnessed at Tonsley Innovation District, which is being developed by Renewal SA. Here a group of related businesses – SAGE Automation, AZZO energy management, SIMEC Energy, ZEN Energy and EfficientSee energy consulting – have formed the Tonsley Future Energy Consortium (TFEC). 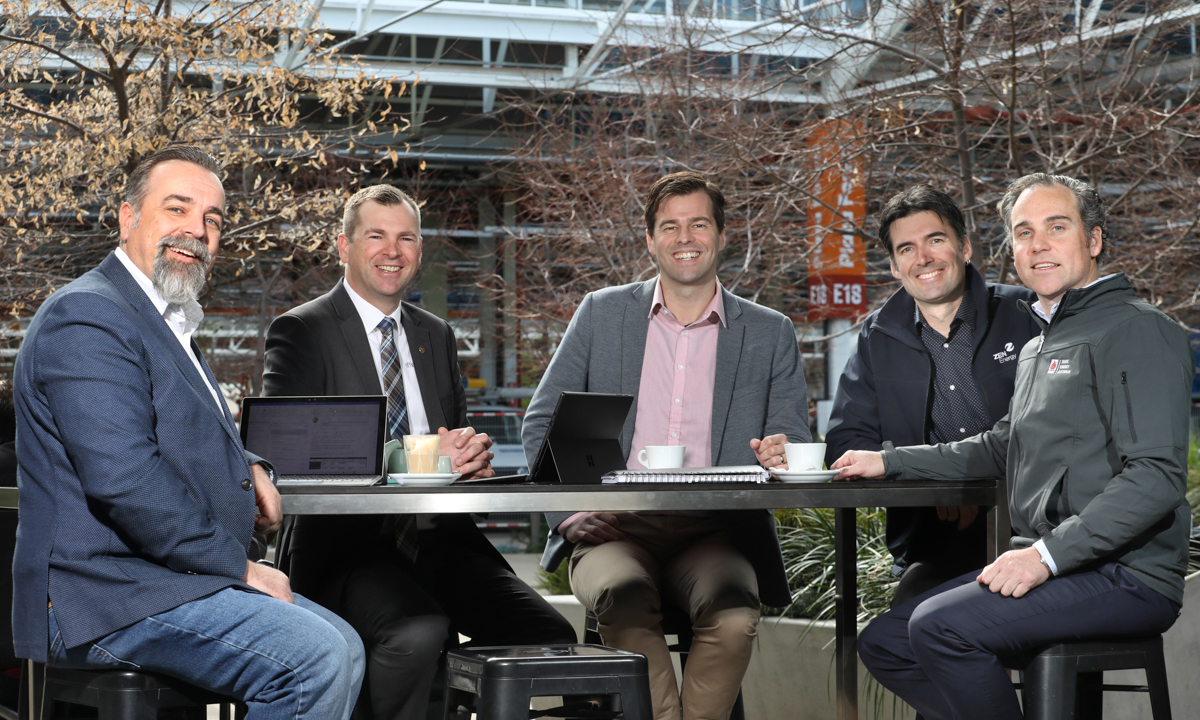 “We are putting businesses that we have a relationship with through the consortium in front of our own clients to create new opportunities for each other,” says EfficientSee founder Quentin Roberts, who was a driving force in the creation of the TFEC.

“One of the concepts behind the consortium is to offer clients a one-stop shop for energy solutions.”

Quentin cites the example of an agribusiness client that needed software to track its productivity and equipment effectiveness. He was able to put digital operations specialist Nukon (part of the SAGE group) in front of the client, along with a range of other suppliers, and Nukon was chosen.

“We have confidence in recommending each other because we know they are good people and will look after our clients. Plus, we see each other often and can get updates on how the work is going.”

The TFEC worked with the Southern Adelaide Economic Development Board and Marion City Council to help four small businesses in Edwardstown improve their energy efficiency.

The businesses – a filter cleaning firm, a diesel mechanics workshop, a company selling point-of-sale equipment, and an auto parts retailer – were assisted by TFEC with energy audits and took up recommendations for equipment such as energy metering, solar arrays and other initiatives to suit their needs.

Quentin founded EfficientSee in 2009 and worked from home or clients’ sites for the next seven years. Then in 2016 he moved into the Co-Hab hot-desk co-working space at Tonsley where he scaled up to eight employees. In late 2017, EfficientSee moved to a larger Co-Hab office in Tonsley’s iconic Main Assembly Building.

“Small business can be isolating,” he says. “You can feel like it’s just you taking on the world. Here I feel like I’m part of something bigger.”

TFEC leaders get together once a month, usually at one of the cafes in the MAB, taking time to keep each other informed and learn more about each other.

“Co-location is one thing, collaboration is another,” Quentin says. “It does take someone to take that first step and take the time to get to know what the other businesses on site do. It’s about developing that culture and seeing it come to fruition.”