New season menus are hardly exceptional in top quality restaurants, but what sets Coal Cellar + Grill apart is the journey they go on each time they change things up. We travel with the restaurant team from Tarntanyangga Victoria Square to West Beach and further out to McLaren Vale on their hunt for inspiration.

What do the world’s first barramundi farm, olive oil from 130-year-old trees and Samuel’s Gorge have in common?

Brent is new at the helm of the Hilton Adelaide’s flagship restaurant. He hails from South Africa and has built a career in hotel kitchens.

Hotels bring a certain rigor to a chef’s regime, whether it’s through the epic hours their kitchens open to accommodate guests operating on international time zones, or the expectation an international hotel brand like Hilton has that their chefs continually innovate while maintaining the highest degree of consistency in every meal.

But if Brent feels any pressure, it doesn’t show.

CityMag is joining the chef and his team on a daytrip to visit some suppliers to their kitchen and cellar as a way to build a better menu.

We’ve hardly pulled out from the Hilton’s taxi zone and into the morning’s stream of traffic on Grote Street before jokes and laughter fill up the bus with optimism. Everyone assembled for today’s journey is giving up his or her day off to participate and there’s not a frown in sight. It’s a good crew.

Brent is behind the wheel of the bus, but we’ve also got on board chefs Josh Gorman and John Wojcik, sommelier Atef Youssif, and two from the restaurant floor team, Yamini Venkat and Chanel Orm. The Hilton’s butcher Mark Dixon is along for the ride too. Mark has worked with Hilton for 21 years and is a great reference point for the menu development process, as he’s seen more than a few in his time.

The first stop on our road trip is at the West Beach barramundi breeding facility, Robarra. It is the world’s first barramundi broodstock sanctuary and hatchery and was pioneered by South Australian businessman Lance Vater.

Founder of Robarra, Lance is there to greet the bus and join us on a tour of the business he built nearly 30 years ago.

Lance stands at the entrance to a strictly off-limits area of the facility. He’s checking we stand in the antibacterial shoe bath long enough before entering the highly controlled breeding facility.

“It’s been a long journey building, knocking down and re-starting,” says Lance to the group. “There was no one in the world really doing what I was doing 30 years ago.”

Robarra is not innovative – it’s completely inventive. Innovation has occurred over three decades in business and is exemplified by the fact the entire facility at West Beach run off two air pumps, excess water grows crops in summer and live fish can be freighted in a custom-built semi-trailer all over the country.

Robarra barramundi have featured on Hilton menus previously – indeed they’re sold all around the world – but this is Brent’s first exposure to the product and we can see he’s studying everything closely.

The tour is a chance for the chef to connect with Lance and learn more about the production process and some of the history behind the business. Brent’s eyebrows – along with the rest of his team’s – raise, when Lance tells the group this facility has the capacity to produce, “tens of millions of fish a year.” 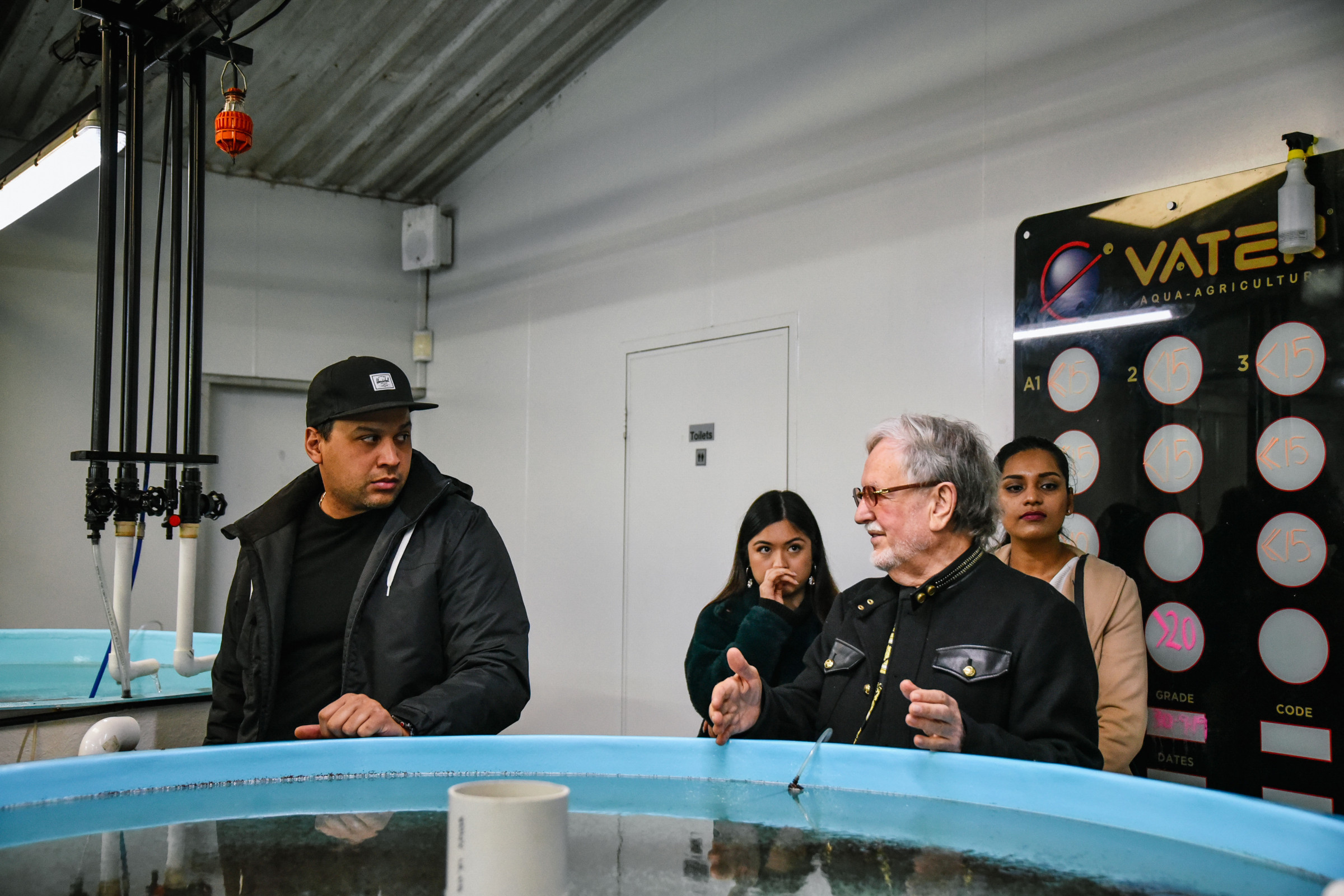 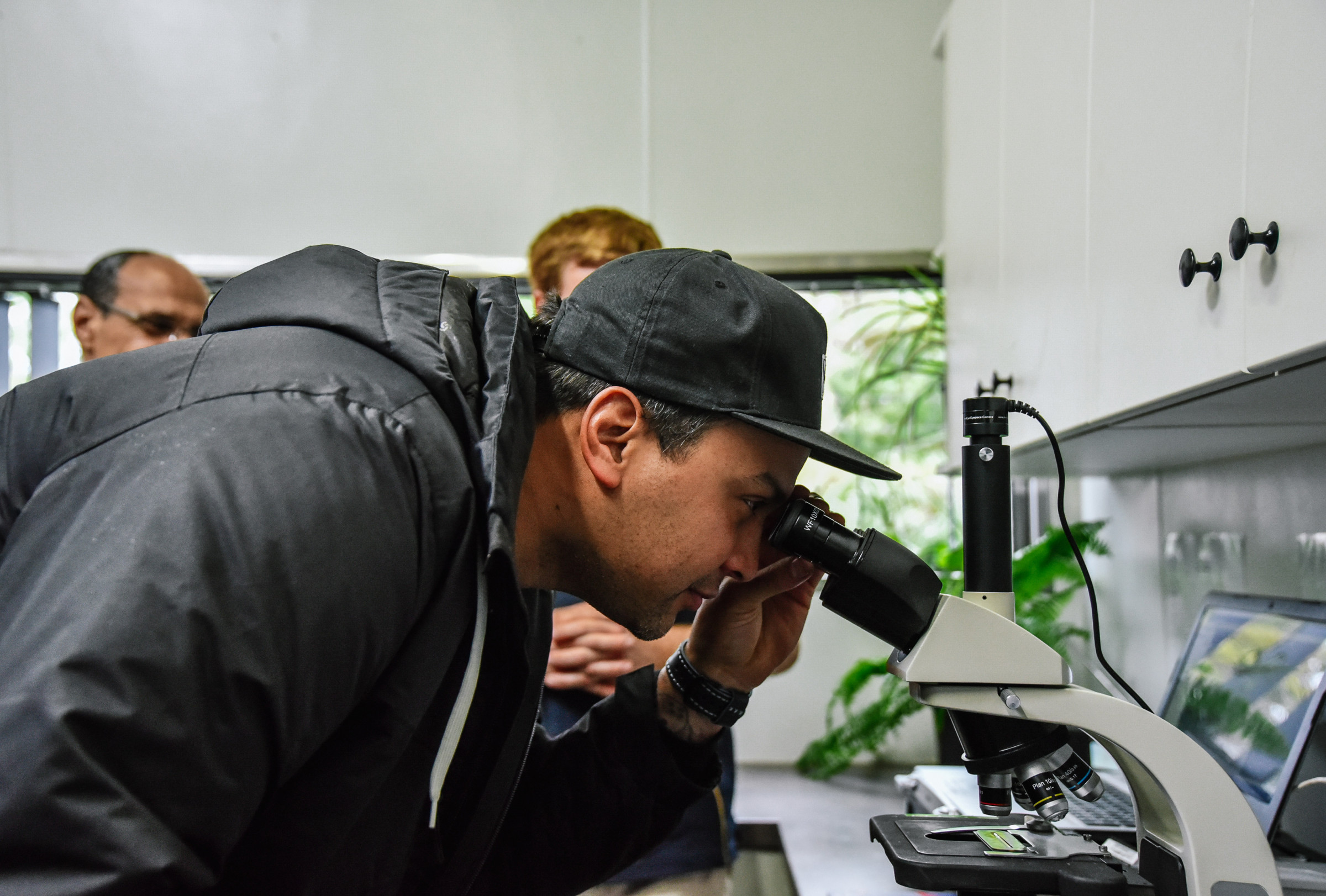 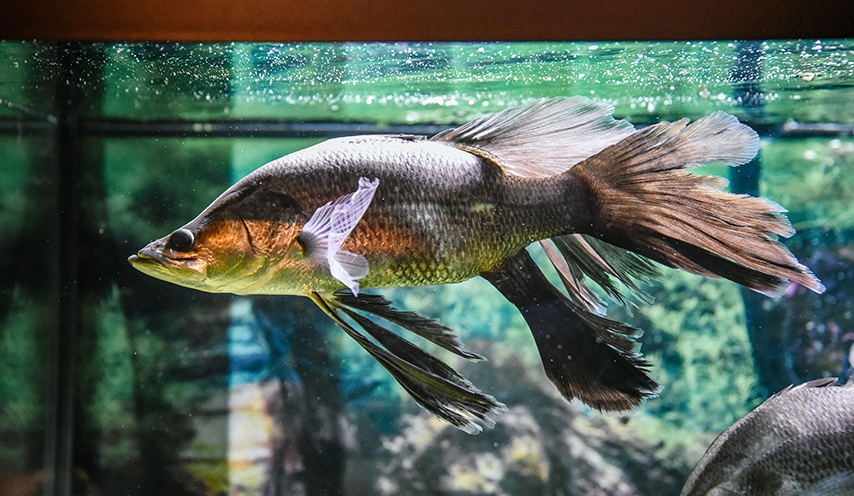 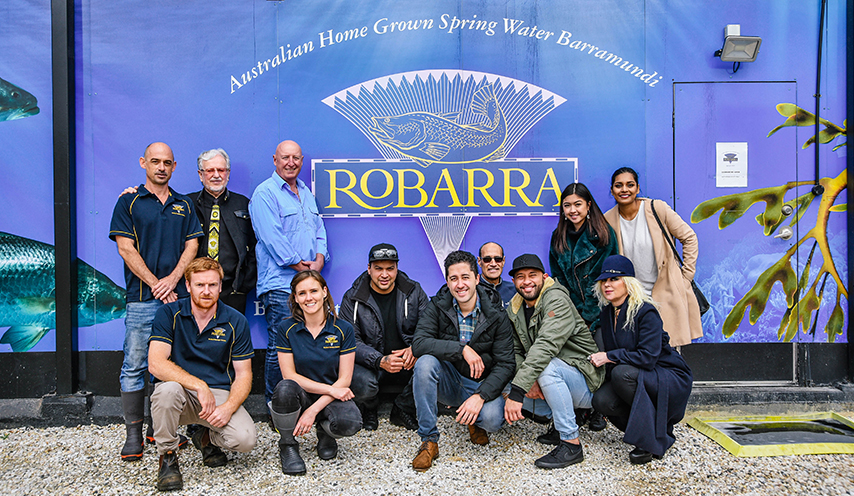 With a captured audience, Lance takes us to his R&D kitchen in Holdfast Bay, where Robarra employs a former Magill Estate chef to conceive of and develop new recipes for his product. Being that it’s only 10AM, the chef had wisely kept things simple: crumbed and fried barramundi with a glass of champagne.

It’s 11AM and our new bus driver Atef – the sommelier – is rounding us up for the next leg of our journey to the McLaren Vale. Brent has secured us some vacuum-packed and whole barramundi, but Lance is insisting on yet further parting gifts.

“I make this wine from the same grapes they use in Grange,” says Lance as he hands the chefs some bottles of shiraz.

Host with the most, Lance Vater of Robarra

Chef John clutches the olive oil Lance has just decanted into a Moët & Chandon bottle for us to take with us. “That oil comes from 130-year-old trees,” Lance says. Of course the oil is made by Lance, too.

South Australia is like that. You think you know an industry and then you meet Lance Vater and are completely blown away by the generosity and utter creativity of a person who’s dedicated a portion of their life to perfecting a product for chefs to put on your plate. This truly is a state of abundance.

On the Southern Expressway the hats of houses push up against their boundaries and peek over six-foot-high fences as our bus races by. It’s a funny characteristic of the suburbs – a whole lot of houses and rarely any humans in view. But the lashings of bitumen and solid horizon of grey ceramic roof tiles eventually gives way to the rolling vistas of vines and the big blue sky that hangs over McLaren Vale.

Samuel’s Gorge winery is a world away from suburbia and yet literally only a few short minutes from the suburban sprawl we cut through from Glenelg to get here.

If you haven’t been to Samuel’s Gorge, it’s a tiny facility retrofitted into an 1853-built farm shed on a ridge with wide sweeping views of Onkaparinga Park to the North and the ocean farther off to the south. It is a spectacular location for lunch. 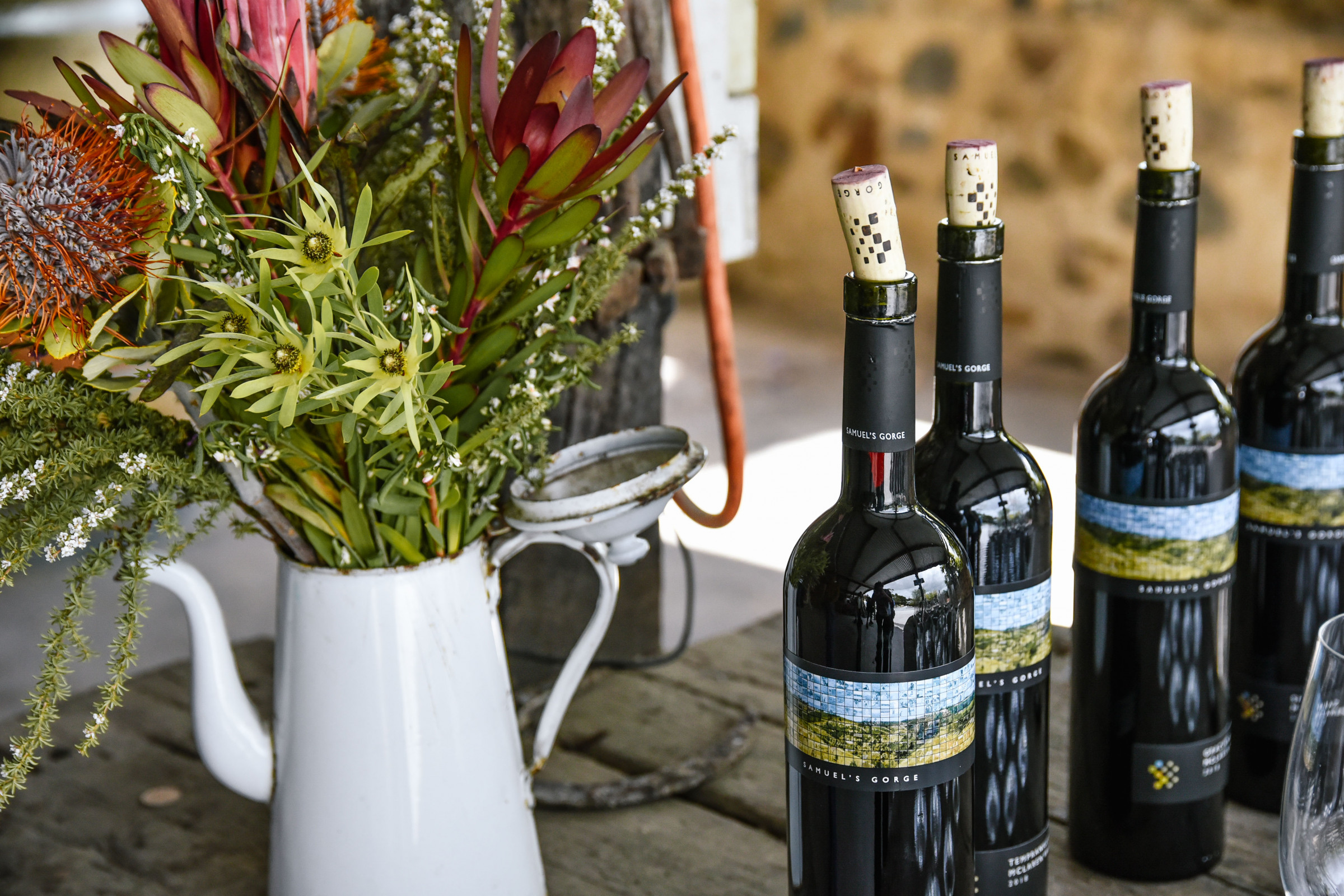 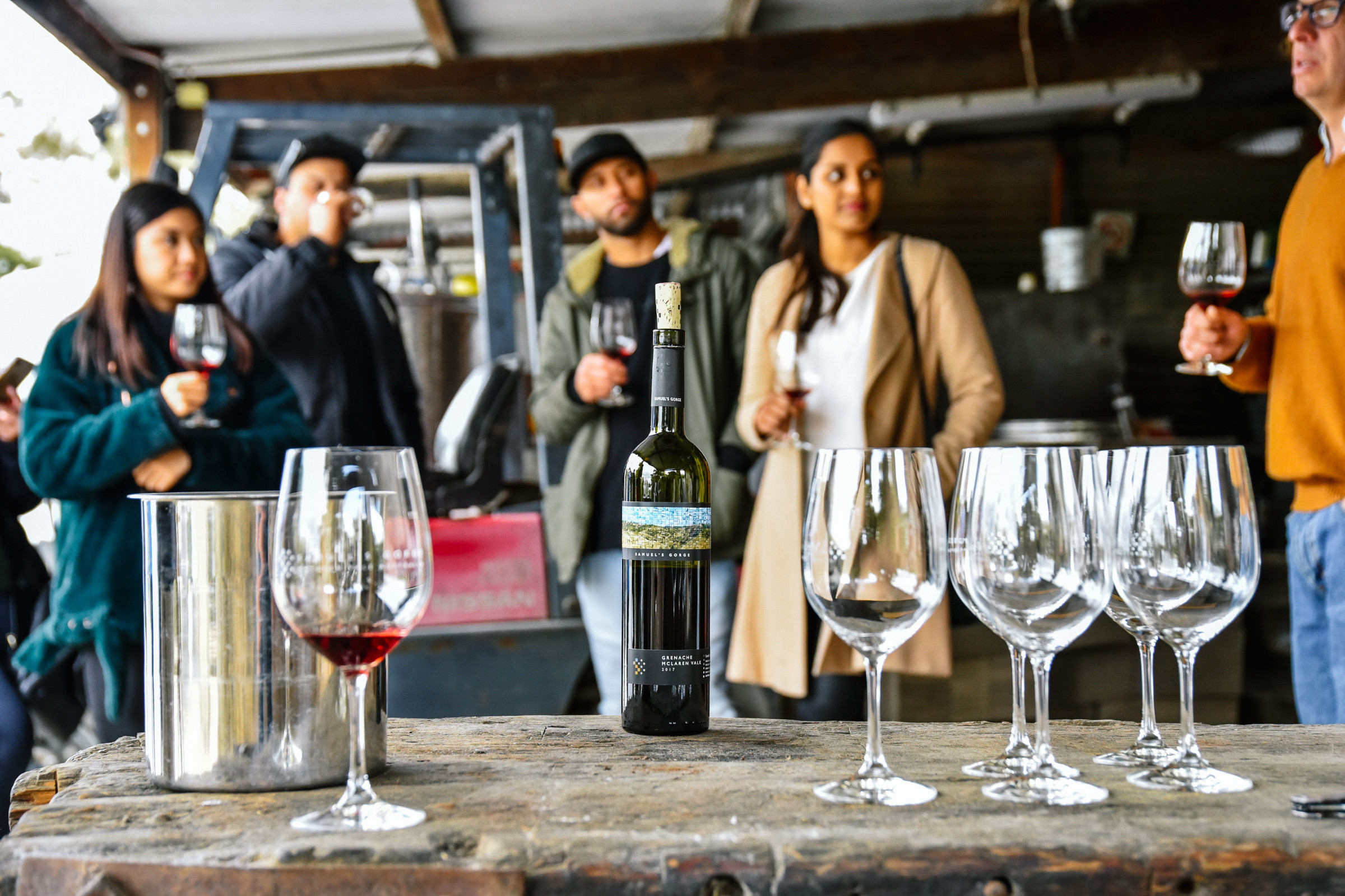 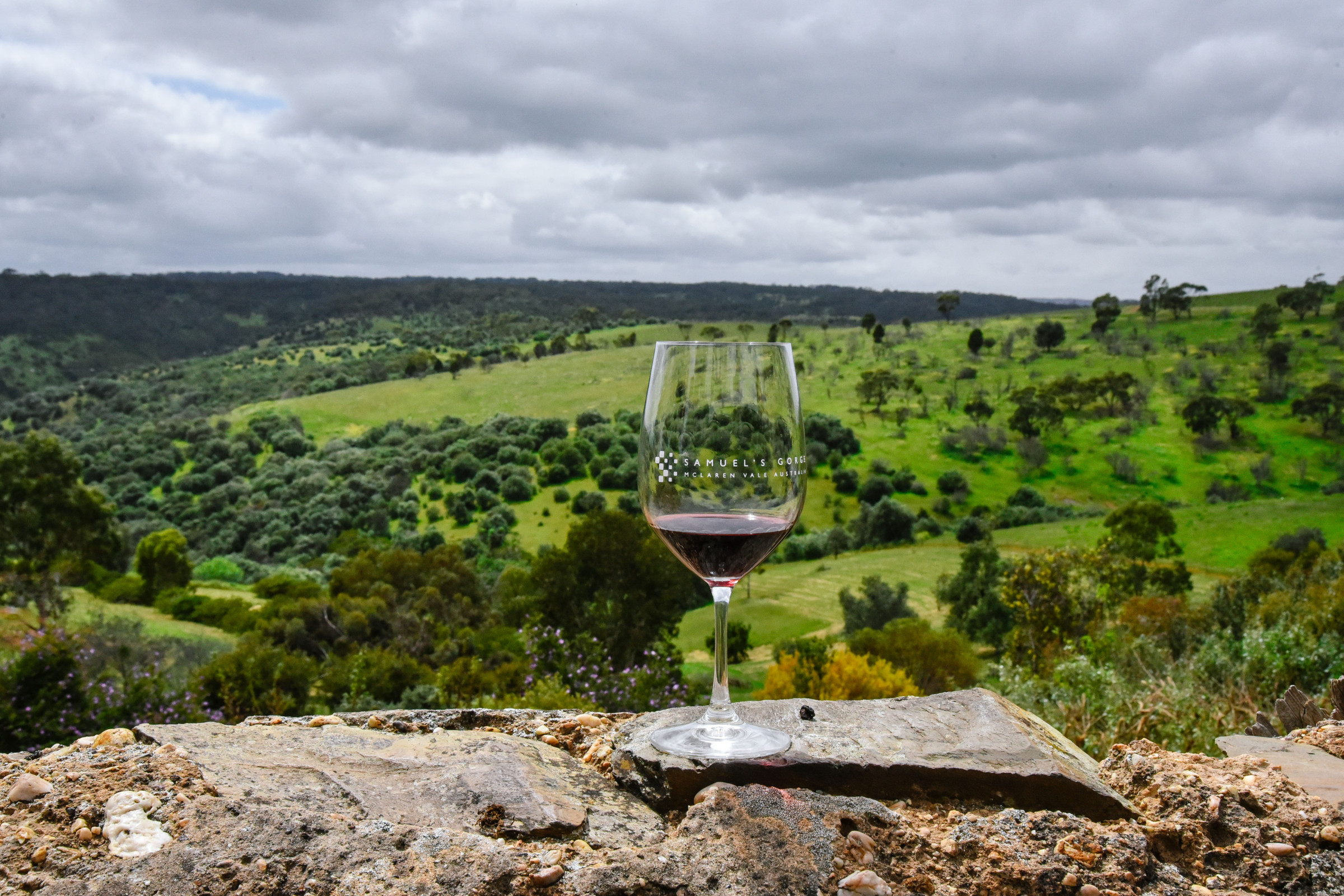 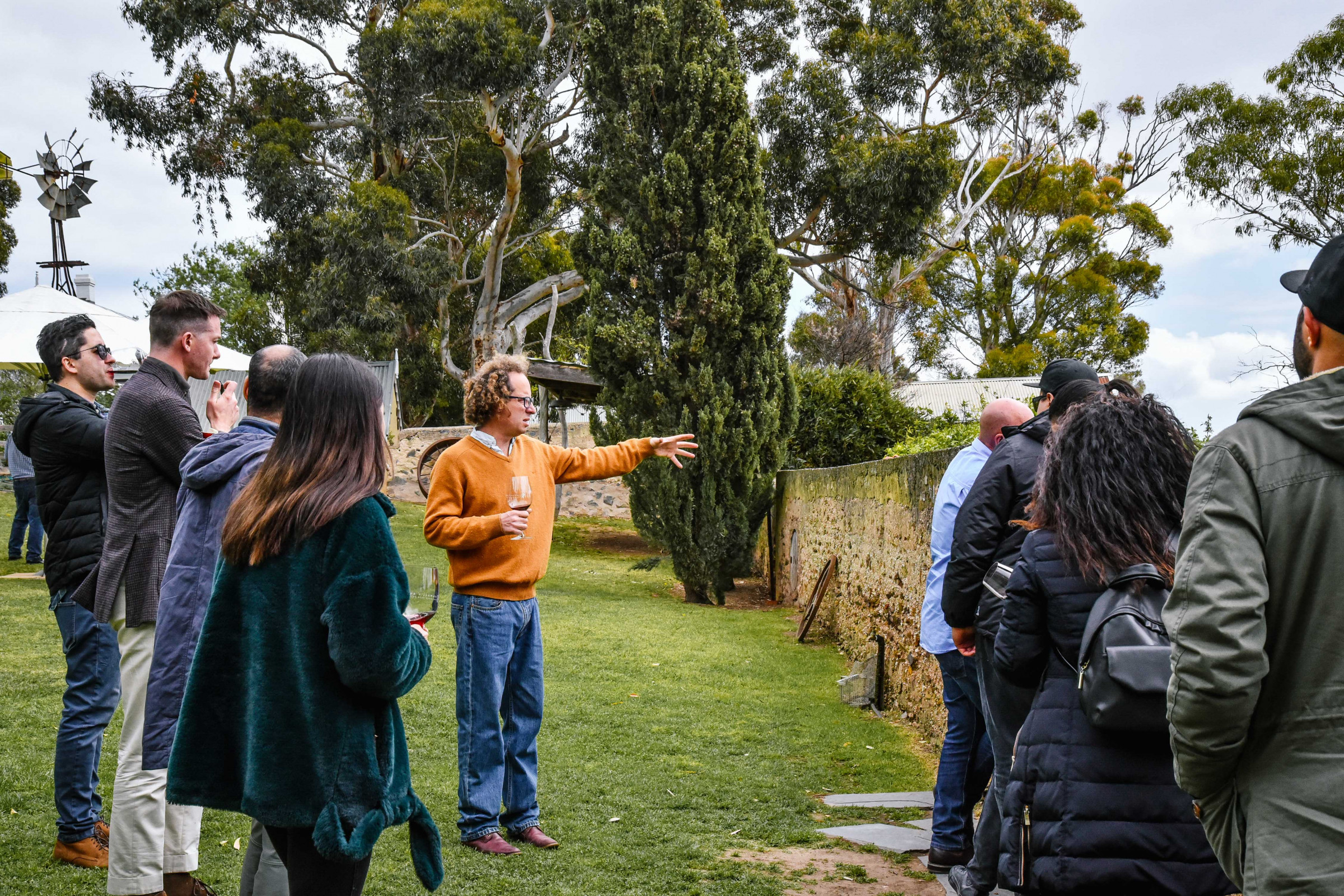 Founder of Samuel’s Gorge and winemaker Justin McNamee started annual leave yesterday, but has come in to meet Atef and the rest of the restaurant group and talk them through the winery’s story and why he isn’t convinced you need to drink only white wine with fish.

“It’s so abstract as to whether you enjoy anything you know?” says Justin rhetorically. “You can eat garden snails and put some garlic with it, and it could be an extraordinary dish. But you’re not going to go out on your own and just start munching on snails.

“You can’t be different if you’re trying to match other restaurants and match the same old dishes with the same wines,” says Brent, agreeing with Justin’s philosophy.

“We can’t compare Coal to other restaurants. We need to be original.”

This time, we’re not the only ones taking notes.

Justin’s thoughtfulness pairs well with our day of gastronomic exploration and we can see Brent is thinking and rethinking his approach to the barramundi.

The tasting moves from the winemaking facility around to the lawn on the north side of the building where an uninterrupted 180-degree view of the valley and Onkaparinga Park lay in wait. There’s no doubt that place and experience impact on a person’s taste. We ask Justin how the team at Coal are going to do this view and his wines justice when selling them at a diner’s table in the city.

“If you drink wine with the light switched off, by yourself, with no other interaction around you, you’ll find your palate totally disordered,” says Justin.

“You taste with your eyes and your nose and it all links to your imagination. At the one time that you’re putting any flavour over your palate, there’s another thousand inputs going into the experience around the enjoyment of flavour.”

The fact the team here today are experiencing the winery with Justin gives them licence by osmosis to conjure up visions of the same blue sky, the views over the gulf, the century-old stone walls and Onkaparinga River valley that all contribute to making this wine so unique.

Meanwhile, our three chefs, Brent, Josh, and John, have become restless and are eager to get lunch underway. Starting with the single ingredient of barramundi, Brent has conceived of a variation with XO sauce and Goolwa pipis, while Josh has been charged with another edit on the Robarra theme.

What the team hadn’t thought of before leaving the restaurant however was the green component of our meal.

“Are these vine leaves the same as the ones you make dolmades with?” Josh asks Justin as he plucks a vine leaf from the verandah.

Justin explains the difference, but also suggests they’re not poisonous. Josh promptly tears a piece of leaf off and puts it in his mouth and starts chewing. He nods his head and makes a positive noise that he’s not dead and the leaf doesn’t taste bad before disappearing back into the kitchen with a big handful of vine leaves. 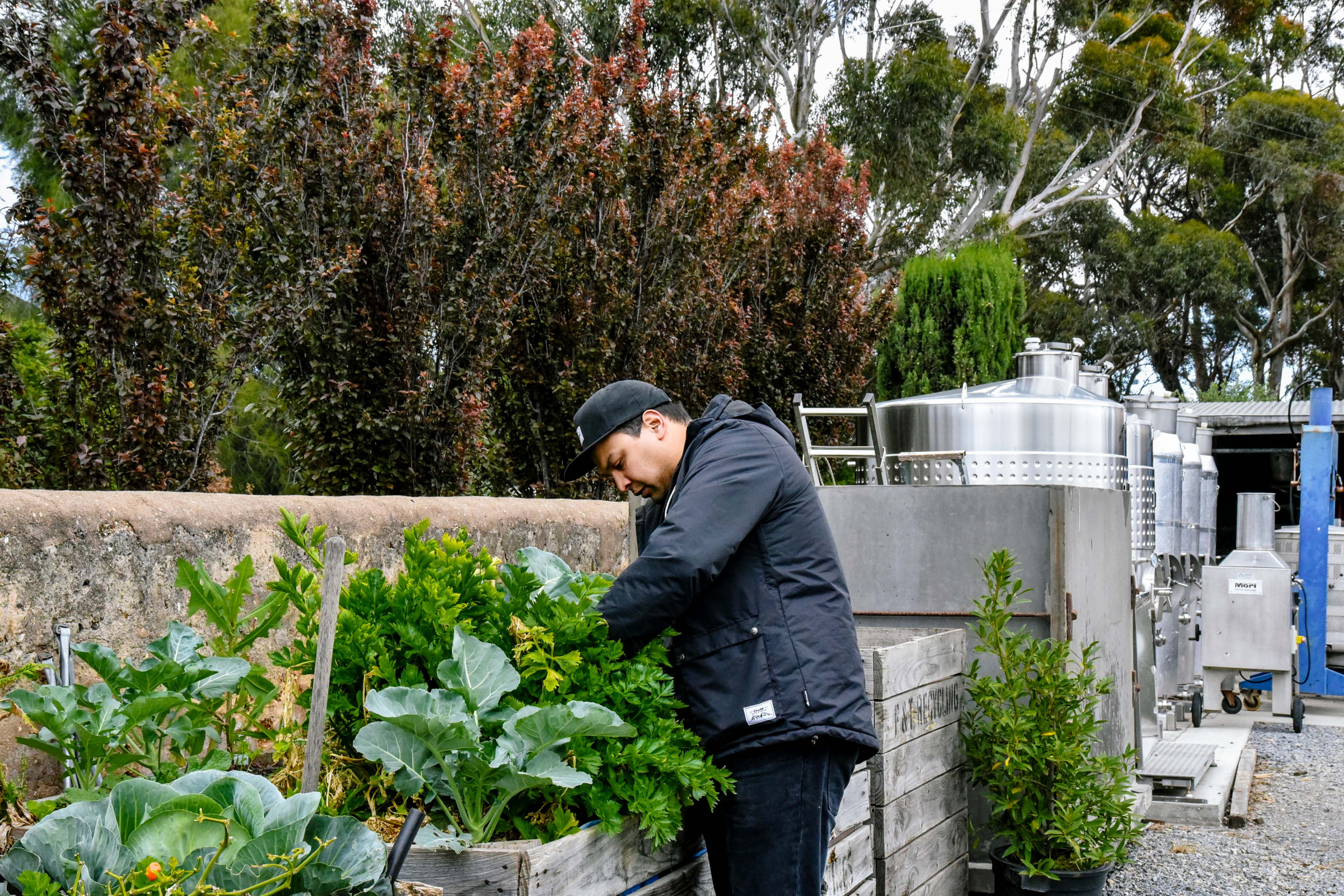 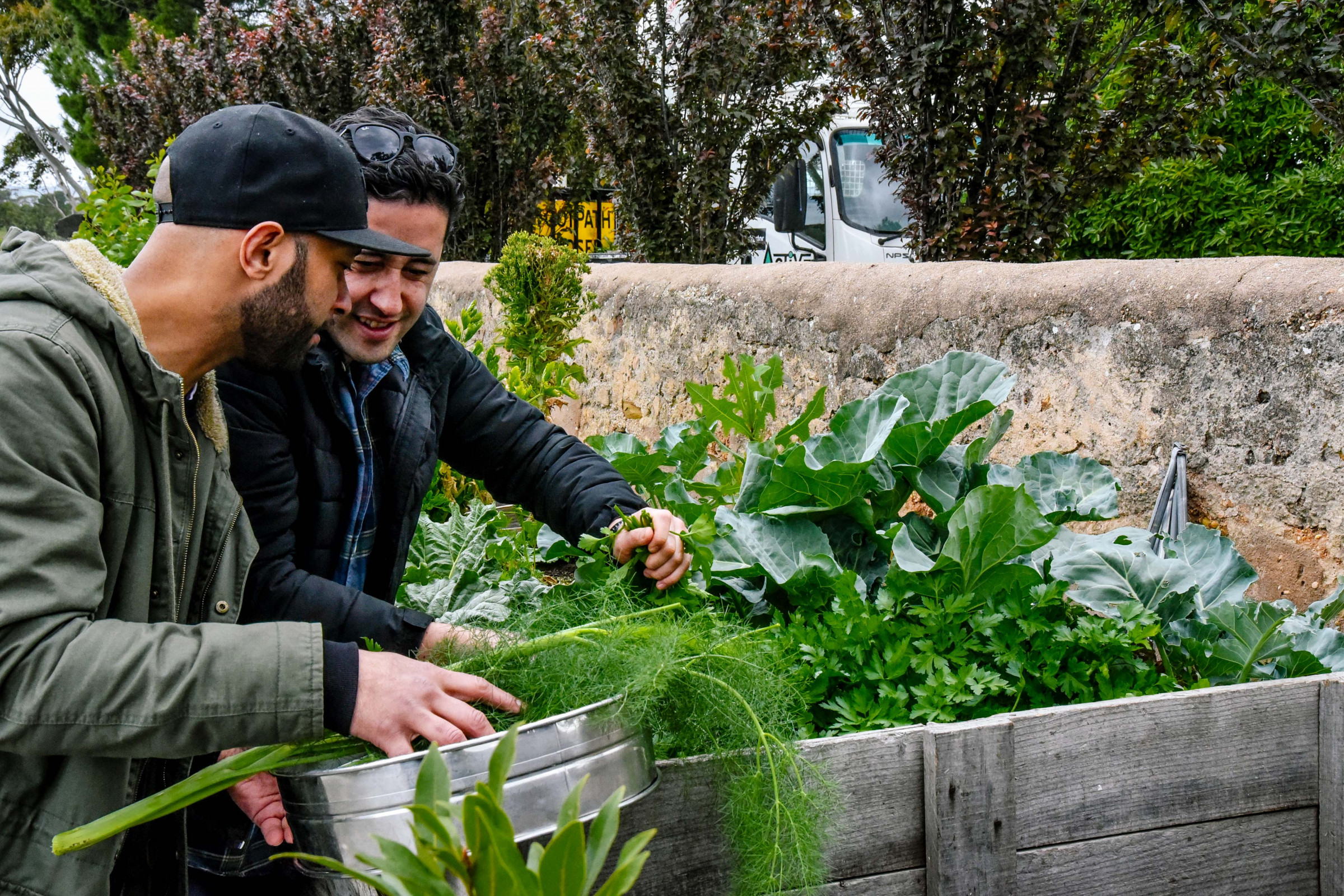 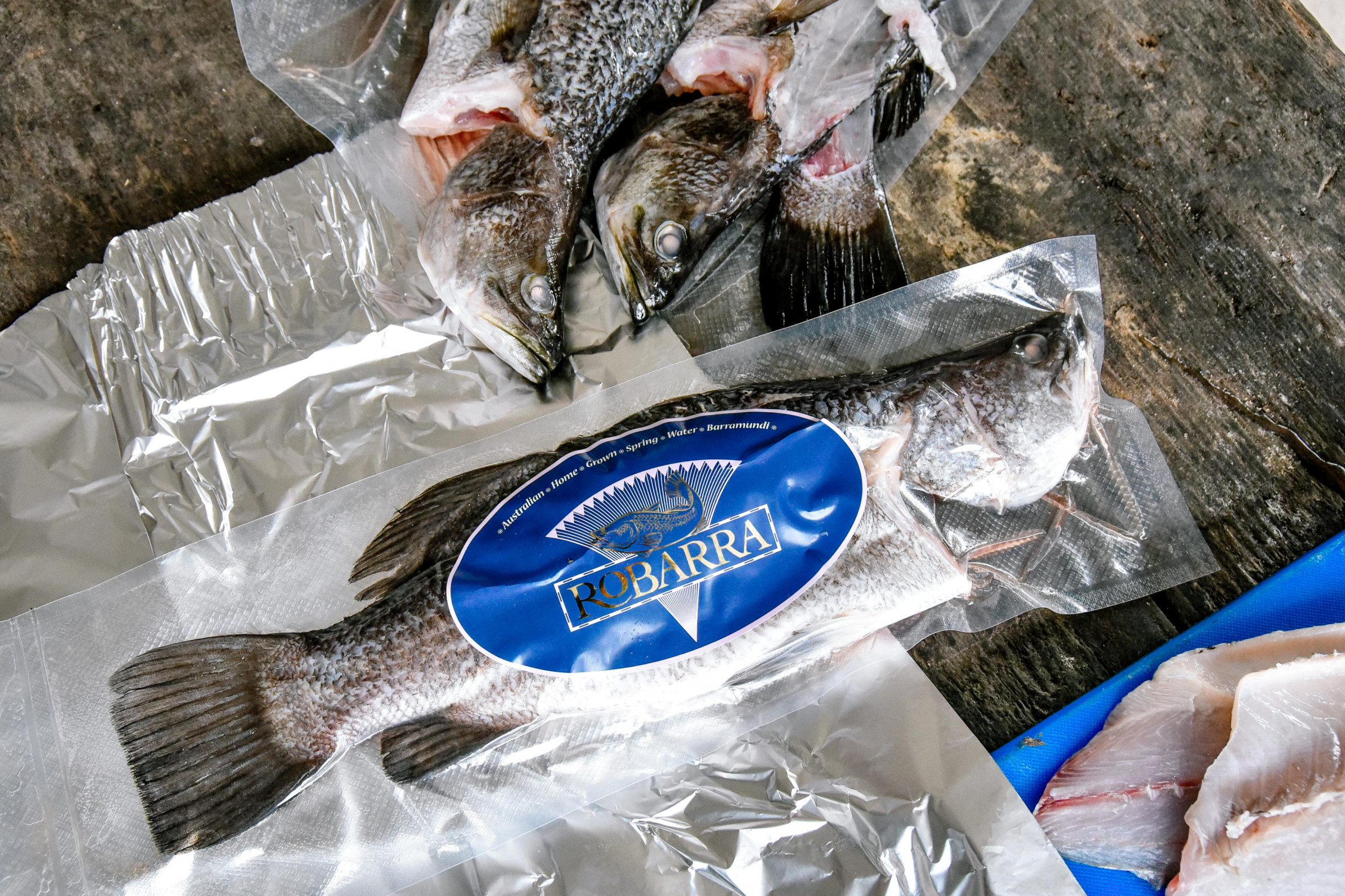 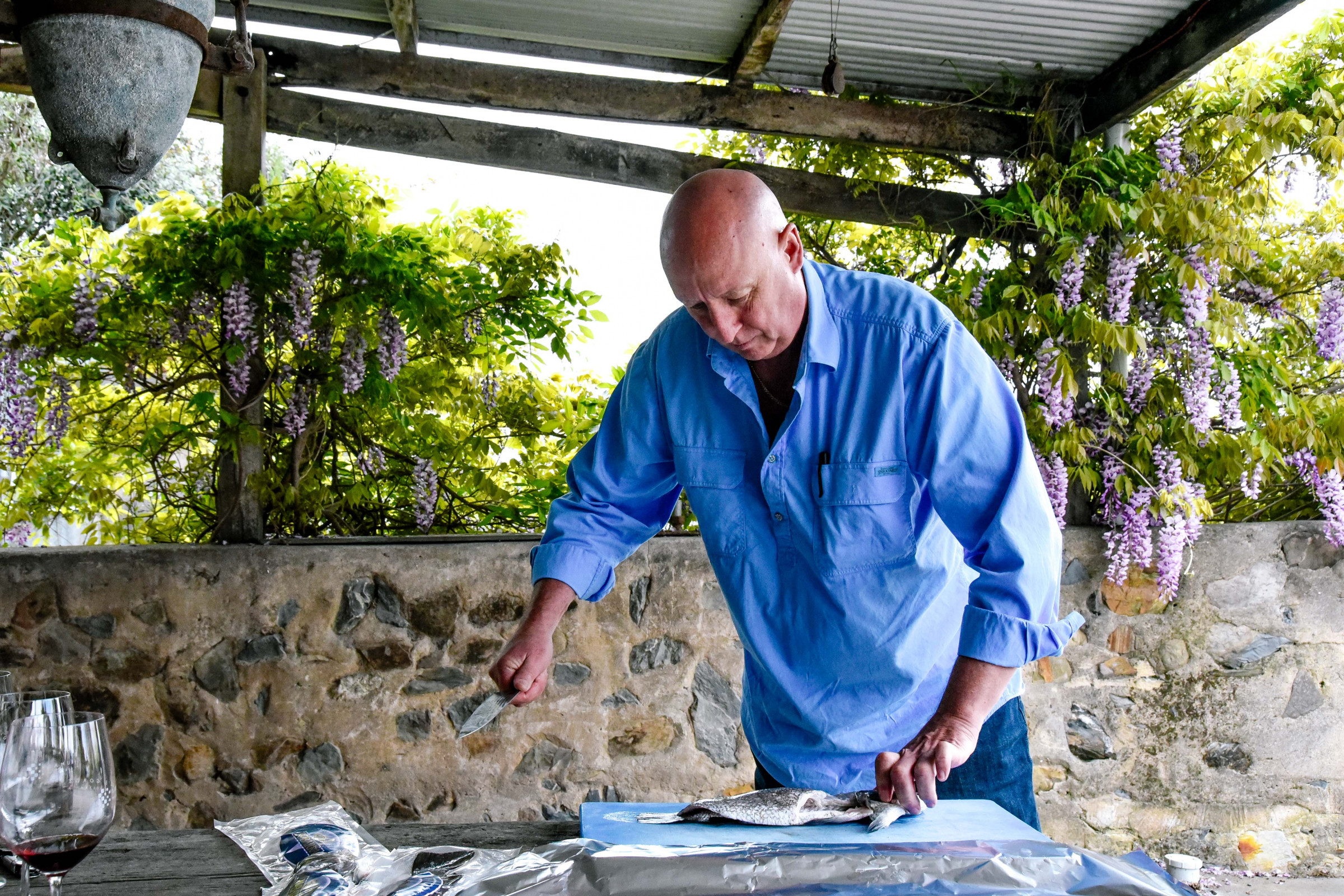 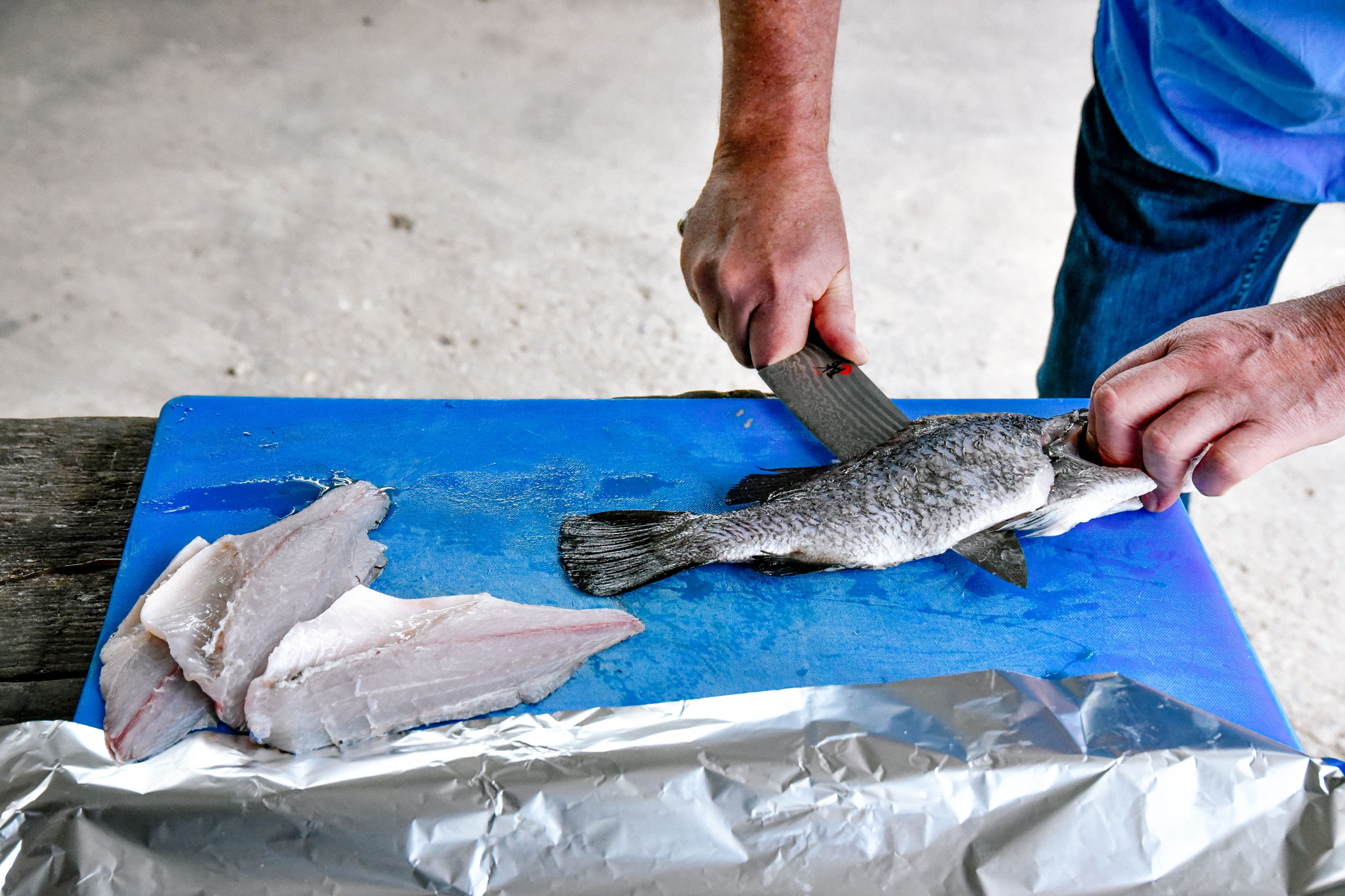 With the formal part of our tasting complete and the restaurant team having sampled each of Samuel’s Gorge’s core range of Grenache, Shiraz, Mourvèdre, Graciano and Tempranillo, the team has splintered off into smaller groups.

Justin’s bright mind and passion for conversation keeps a good handful of the crew enthralled, while others seek a bit of solitude on the lawn and are content just soaking up the view.

If the chefs in the kitchen felt like they were missing out because they’d been tasked with preparing the meal, they weren’t showing it. The camaraderie between the three is obvious. And while cooking at Coal may be another story, there was certainly no “Yes chef” in the kitchen at Samuel’s Gorge.

All the while, Lance’s Moët & Chandon bottle of olive oil sits in the middle of the preparation table – a talking point for the three chefs. It now holds oil from “150-year-old trees,” says Josh, updating the grandeur of this legendary bottle of oil.

The oil had become an essential ingredient for cooking the fish and dressing the salad the team had managed to forage from Samuel Gorge’s own veggie patch. Serendipity forging new flavour combinations while the chefs were thriving off the challenge.

The team assembles on the verandah with our most gracious hosts at Samuel’s Gorge.

Large plates are set down on the long table. Josh ended up using the vine leaves in an Alfoil parcel to steam barramundi fillets with fennel leaves also found in Samuel’s Gorge’s garden. The result is spectacular.

Goolwa Pipis mix well with garden salad cut and tossed mere minutes ago, while the XO sauce gives the light and delicate falvours some depth and moreish complexity that pairs effortlessly with a Samuel’s Gorge Grenache.

The chefs at Coal Cellar + Grill could have made a menu in the comfort of their commercial kitchen, but today’s experience demonstrates exactly why that’s the worst way for a restaurant to respond to the shift in seasons.

Today we witnessed truth in the cliché: necessity is the mother of all invention.

Getting out of their bubble and into the world, bonding as a team and making connections with their suppliers not only reinvigorated each person’s passion for hospitality but also highlighted the power of perception and all the contributing factors that build a better meal and menu.

Brent, Josh and John didn’t have all the bells and whistles, nor a cool room stacked with ingredients. But what they made was real, it had a story from the high-tech production methods of Robarra to the hand-raked cockles of Goolwa right down to the garden salad and vine leaves foraged from Samuel’s Gorge.

This story was made in partnership with Coal Cellar + Grill

Visit coalcellarandgrill.com.au to connect with the team.
Many thanks to our hosts for the day: Robarra and Samuel’s Gorge.