As community consultation for the State Government's proposed Riverbank rezoning nears its end, three experts warn of the irreversible threat the project poses to local wildlife, public amenity, and the Kaurna community's connection to the land.

With community consultation on the proposed Riverbank Precinct Code Amendment scheduled to close next week, CityMag spoke to three experts for their perspective on the public land rezoning initiative.

Spearheaded by Attorney-General and Minister for Planning Vickie Chapman, the plan would see 71ha of the city’s green belt – from Tulya Wardli Bonython Park to Kintore Avenue – either rezoned or subzoned, opening it up to previously unallowable development.

From the State Government’s perspective, this would allow the progress of various projects of “state significance”, as described in their initial proposal, dated 16 July 2021.

Such projects include the new Women’s and Children’s Hospital, set to be constructed next to the Royal Adelaide Hospital, and the Marshall Government’s proposed 15,000-seat Riverbank Arena.

As for the rest of the 71ha, according to Chair of Kaurna Yerta Aboriginal Corporation, elder Jeffrey Newchurch, the rezoning plans would mean “all the sites are at risk”.

“We’ve said that time and time again,” he says.

“There were reports, cultural heritage reports… clearly defining the River Torrens and the City of Adelaide and its park lands [as being] of significance to us, and not only in a cultural sense, but in a mental sense, spiritual sense, and wellbeing sense.”

Jeffrey is identified as a stakeholder with a “high” level of interest in the project, according to the State Government’s own engagement plan, but he says he first heard of the development through media reports.

“[We saw] no forward conversation or no invitation to sit down with the planning team to allow Kaurna to have that position,” he says.

“We were bought into this conversation with the support of the Adelaide City Council.

“We’re making sure that Kaurna has that voice and has that position, given that the River Torrens and surrounding City of Adelaide is highly significant, culturally and spiritually, to the Kaurna community and other Aboriginal people.” 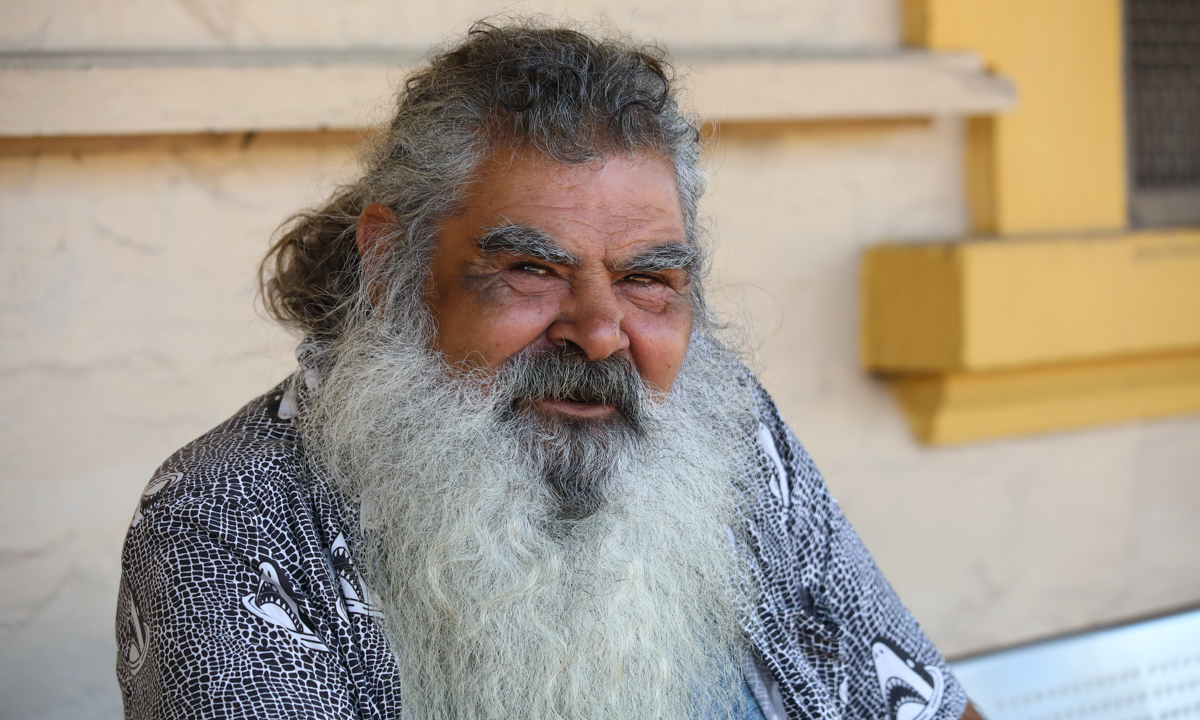 In August this year, Adelaide City Council’s Associate Director of the Park Lands, Michelle English, first raised concerns regarding the Planning Minister’s proposal to amend the Planning and Design Code, which would change the zoning applications in certain Adelaide Park Lands areas.

At that council meeting, English warned of the State Government’s plans to seize a parcel of green space and transform it from a neglected storage depot into a multi-storey carpark for the new Women’s and Children’s Hospital.

She recommended councillors write to the Attorney-General requesting “additional investigations and early collaboration” on alternatives to the carpark design.

The 71ha flagged to either be rezoned or ‘subzoned’ (which is when a new superior zone is applied on top of an existing zone) equates to roughly 10 per cent of the city’s 760ha of park lands and squares. The land would be divided into four precincts: health and biomedical, entertainment, innovation, and active waterfront.

(There is also a small parcel of land flagged to be rezoned as part of the innovation precinct further east, next to the Adelaide Botanic Gardens.) 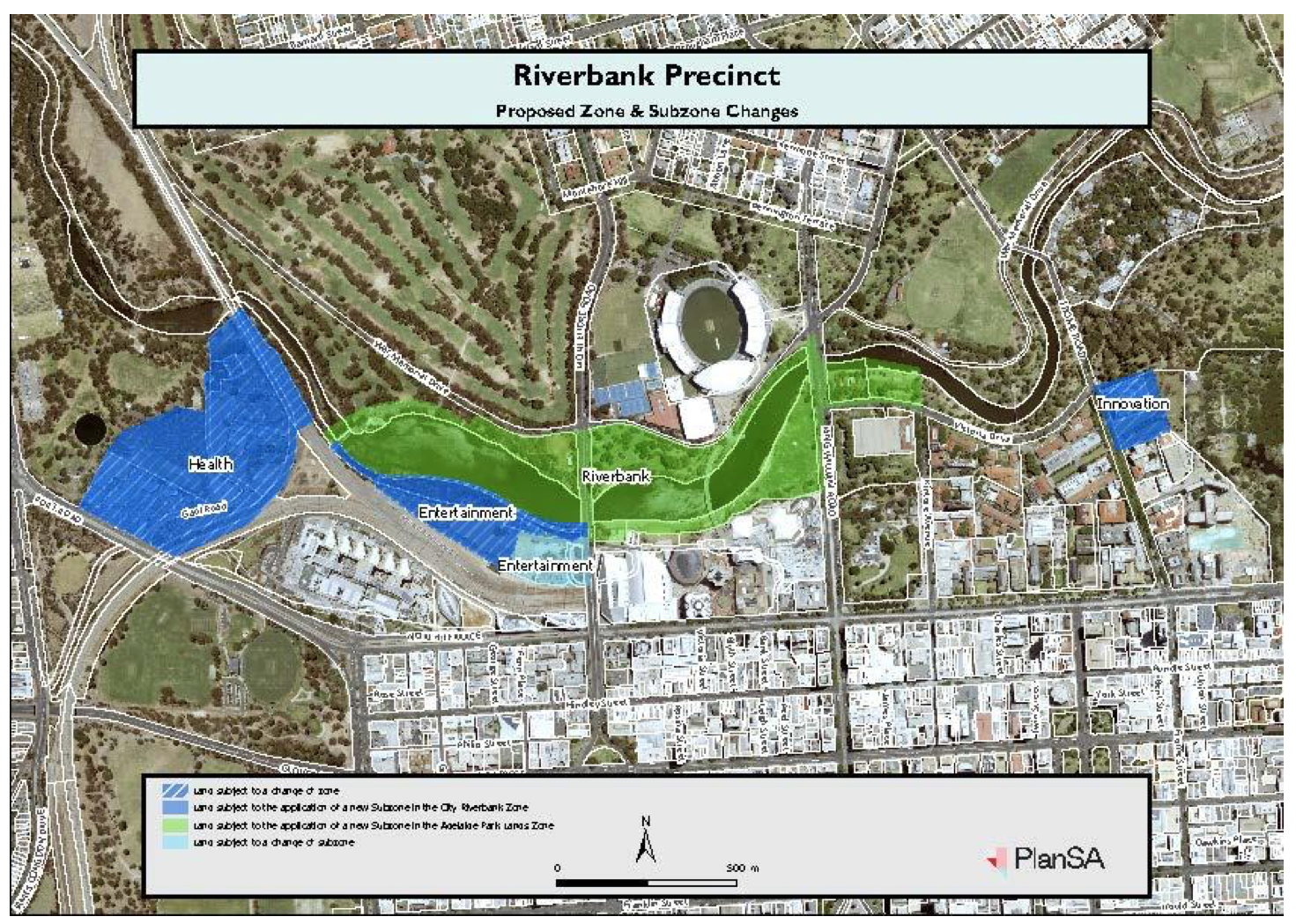 The proposed areas of rezoning or subzoning. This picture: PlanSA

University of Adelaide Associate Professor Patrick O’Connor, a self-described “ecological economist”, tells CityMag if the Attorney-General’s plan is progressed, it will put the city’s identity at risk.

“You don’t get the land or the open space back,” Patrick says.

He also believes the Minister hasn’t valued the land adequately.

“We don’t have a fair contest between what we might predict to be a cost-benefit for building a hotel, or building a recreation centre, or building a sports stadium, compared to the utility that we have now and over time for keeping the space flexible, open, intact, with ecological integrity,” he says

“It’s an imbalance in the way we look at things economically that often says doing things that create bricks-and-mortar results in higher values, but it’s not necessarily the case.”

Rather than looking at the land solely through a monetary lens, Patrick says the “walks and strips” should be assessed according to the wellbeing, recreation, fitness and aesthetic returns they provide.

“All of those things have real values,” he says.

CityMag understands the State Government’s Department for Environment and Water is currently working on a report quantifying the worth of South Australia’s national parks, including the measures Patrick has outlined. A spokesperson from the department could not confirm when this report would be published.

We also contacted Business SA, the state’s peak economic body, for their thoughts on the proposed development’s impacts on local industry and trade, but they declined to comment.

The City of Adelaide also declined our request to speak to one of their biodiversity experts about how this change would impact the natural environment.

But a recent biodiversity report published by the Adelaide City Council last month does point to some potential negative impacts on wildlife.

The report reveals the “vulnerable” eastern water skink is of “conservation concern” and has been observed on water edges in Tulya Wardli Bonython Park – where a new entertainment or health precinct is proposed.

As a representative of all winged insects and critters, Chairman of Butterfly Conservation SA, Gerry Butler, also tells CityMag “any loss of park lands will prejudice the biodiversity of the region”.

“Any loss of habitat and increased traffic, whether it’s human or pets or vehicles, is going to impact on the habitat for all species, insects and other vertebrates,” he says.

A range of butterfly species, including the flame sedge skipper, the broad-margined and satin azure, and the two-spotted line-blue, rely on fringing vegetation along  Karrawirra Parri River Torrens.

Gerry says without the Adelaide City Council recognising certain species’ importance and preserving their habitats, some bug populations would be decimated.