A second round of Kaurna repatriation reburials occurred at Wangayarta last week, as key figures in the founding of the site look to take the First Nations memorial concept to other parts of the state. 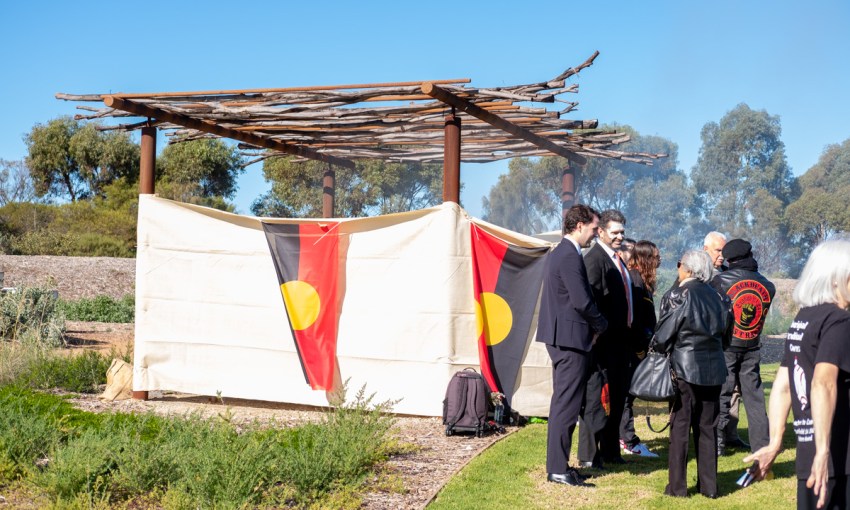 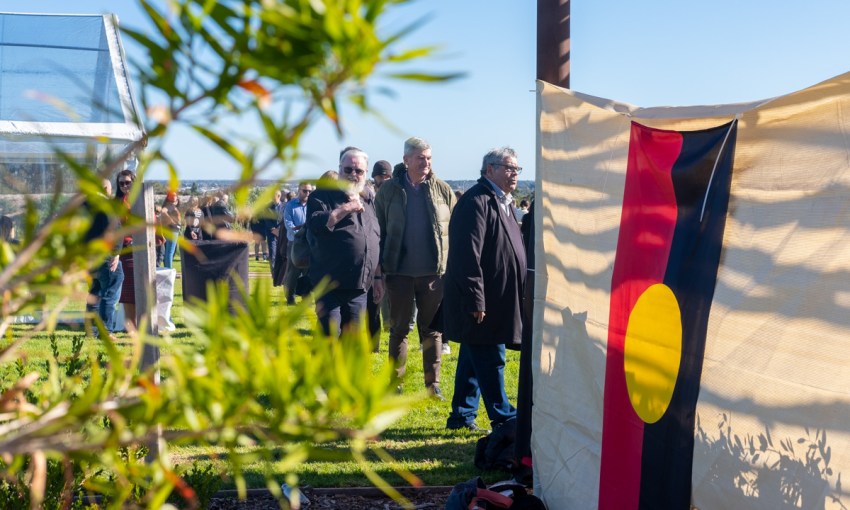 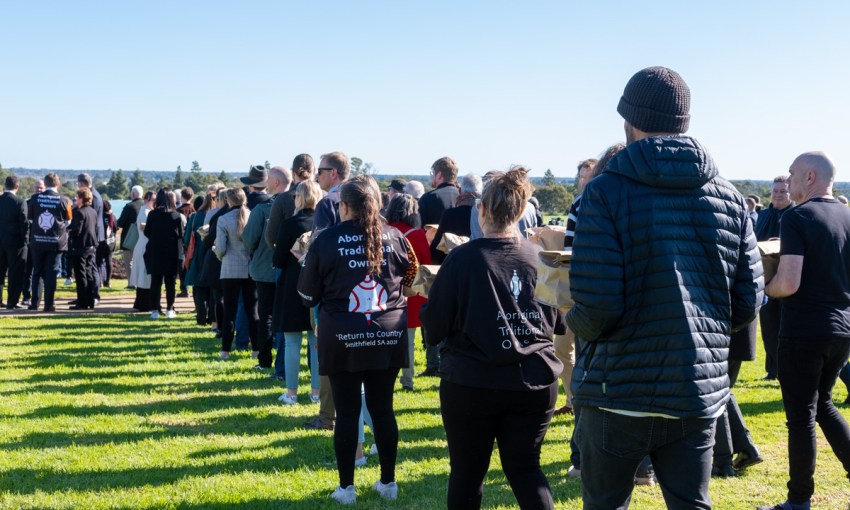 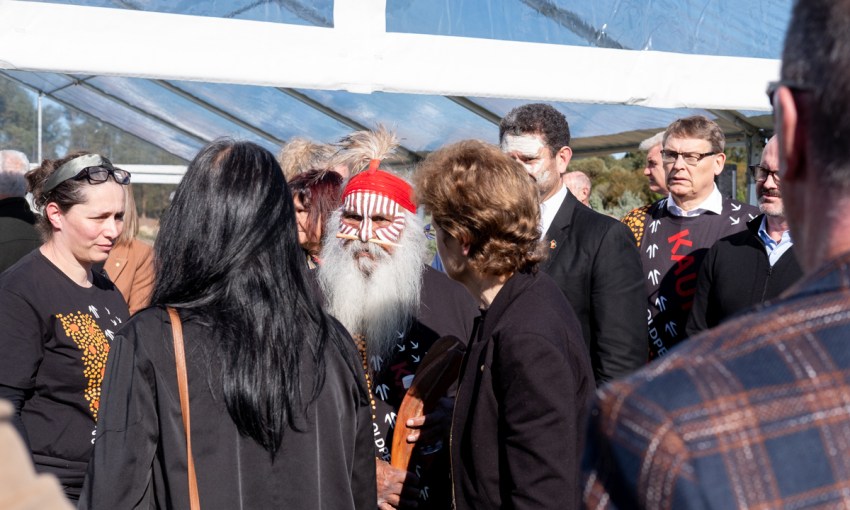 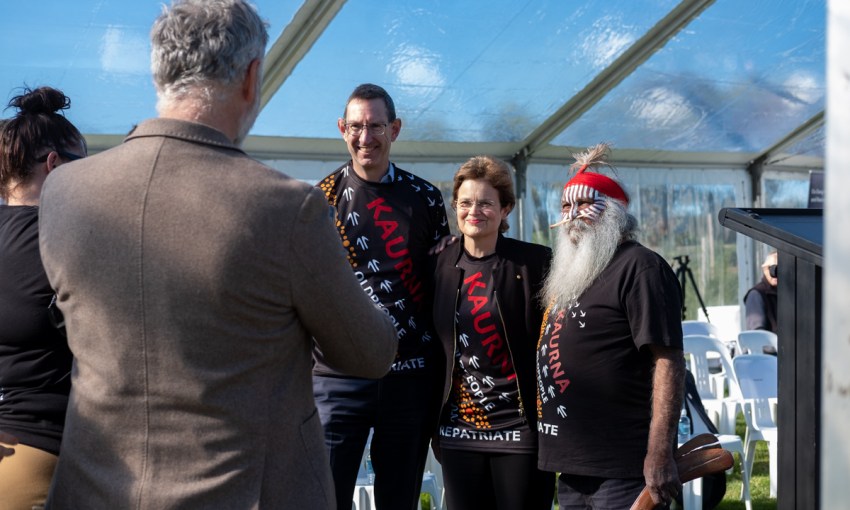 Another 220 Aboriginal remains were repatriated to Wangayarta, the recently established Kaurna reburial site, last week, in the second such ceremony since its launch in December last year.

The remains, just some of the more than 4000 Old People’s bones the South Australian Museum holds, were disturbed within and collected from three western suburbs council areas, and have now been reburied in Wangayarta’s western mound.

During the December reburial, the task of delivering remains from the smoking pyre to their final resting place was reserved for Kaurna community members, as well as dignitaries and representatives from the South Australian government and some of the state’s colonial institutions – those which had historically dug up, traded, studied or collected Aboriginal and Torres Strait Islander remains.

In the June reburial, everyone in attendance on the day was called on to join the procession.

“This one felt good… This one was a lot different to the first one, because it was about community,” says Uncle Jeffrey Newchurch, a Kaurna Elder and key figure in the establishment of Wangayarta.

“To capture that lining up together – Aboriginal, non-Aboriginal, the age difference from the grandparents, seniors, to the little mini ones, the grandchildren.

“You’ve got Uncle Mulla [Sumner] with Black Deaths [IPC], government agencies, the guy who prints my t-shirts, the Kilburn footy club. It’s community. It’s bringing everybody together. So you’re healing. It’s what gets us to our healing. It’s critical.” 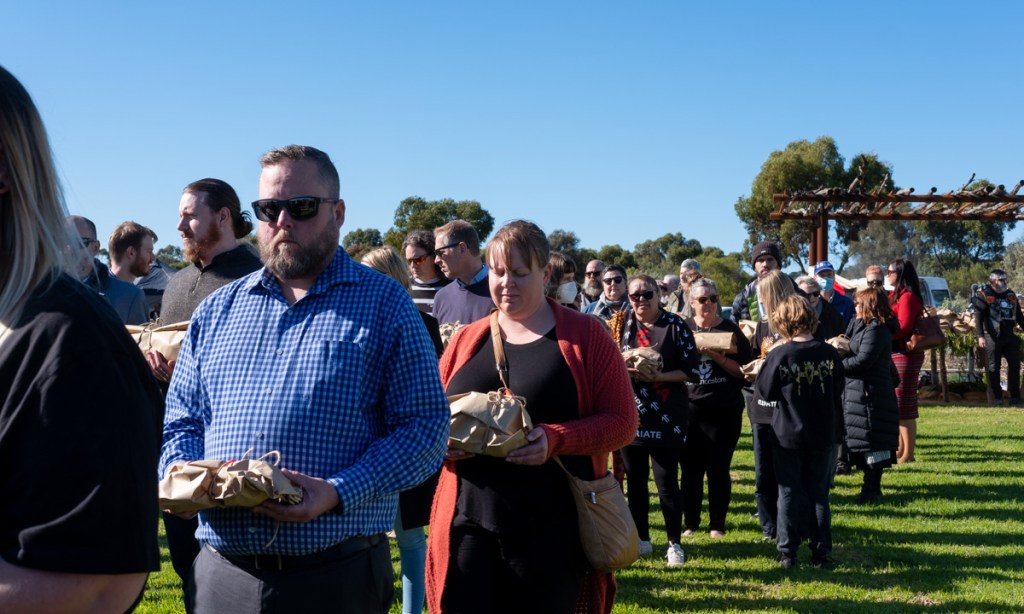 For Aunty Madge Wanganeen, a Narungga Kaurna Elder, repatriation officer with the SA Museum, and another key driver in the development of Wangayarta, the further involvement of young Kaurna community members is important.

“I believe that we should bring them [in] into the future,” she says.

“A lot of old people is goin’, and we usually die before 60. This has been hidden for a very long time, and now I’ve expanded that and I’ve invited a lot of people in to be a part of this day.

“So the kids, they’re very vital to me. Just having them there, and they’re involved. And that’s when the fear doesn’t come. When they grow up, they don’t fear, because they know they’re doing the right thing.” 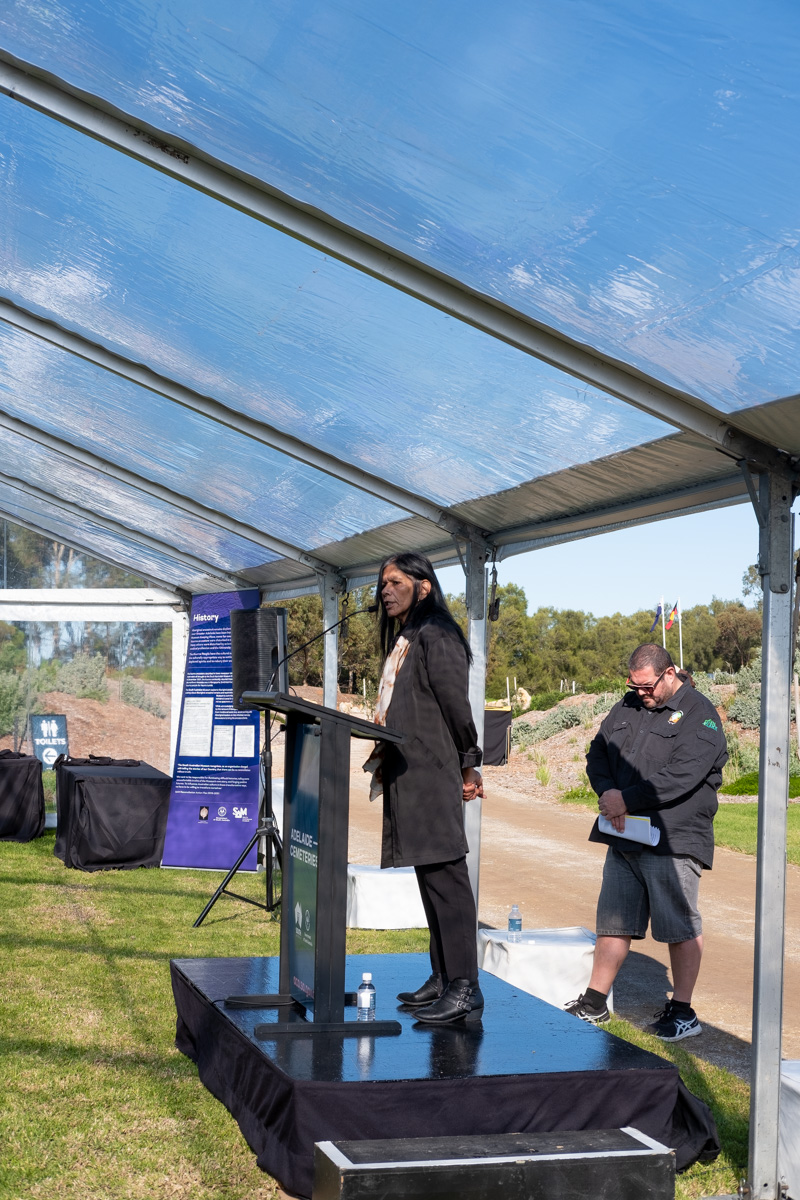 During its construction, Uncle Moogy spread soil sourced from different locations across Kaurna Country so Elders could be buried with the land they once walked across.

The establishment of the site was made possible through the coming together of Kaurna Yerta Aboriginal Corporation; the SA Museum; Adelaide Cemeteries, which gifted 2ha of its Smithfield cemetery; and the South Australian Government, which contributed $300,000 funding.

Head of humanities at SA Museum, Professor John Carty, says the call by Kaurna Elders for broader involvement in the reburial process should also extend to other state institutions.

John gave an apology for the past wrongs of the Museum at the December reburial, and this was followed last week by an apology from the University of Adelaide’s executive dean of the faculty of health and biomedical sciences, Professor Benjamin Kile.

“In the late 1800s and early 1900s, these senior people – professors of physiology, professors of anatomy, my institutional predecessors – collected and traded the remains of Kaurna ancestors.

“To understand this history, to read about it, is to be shocked and to be stunned, and if you ever get the chance to read some of the personal correspondence between these people, you would be absolutely staggered by their approach to Indigenous people, the attitudes expressed to the Kaurna and Indigenous communities, not just in Australia but around the world.” 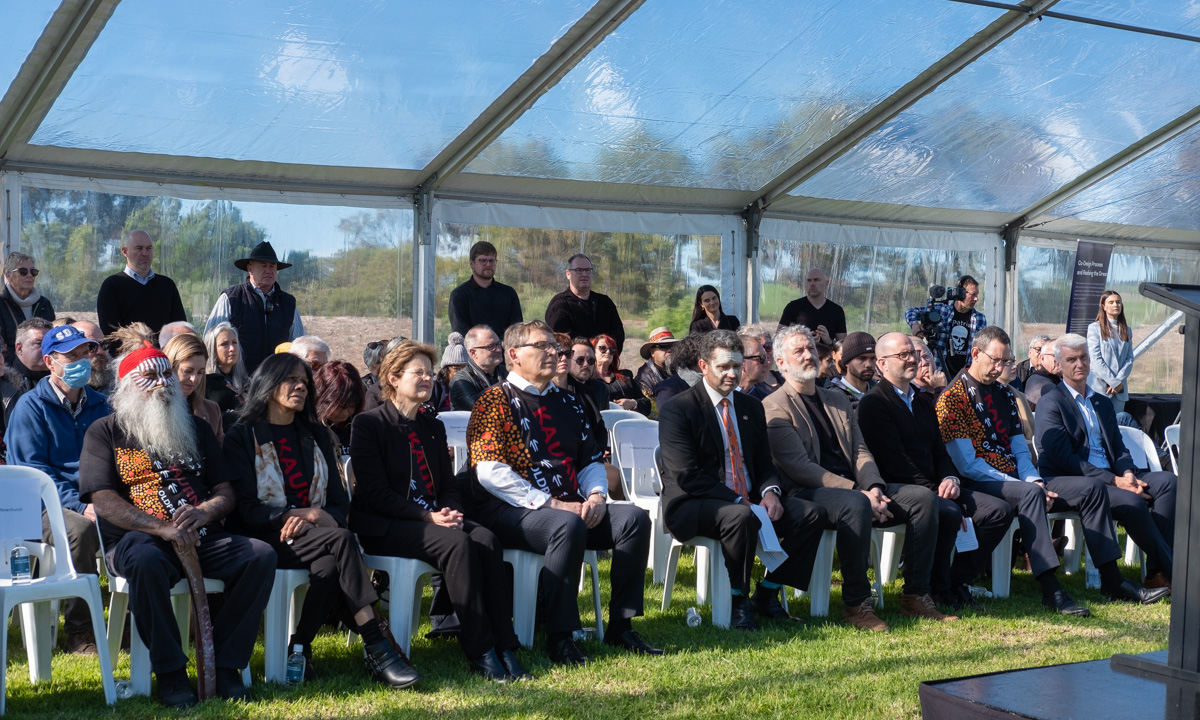 John says it was important the “consciousness of responsibility” was being shared more broadly.

“I think the danger is people mistake this as a museum problem, rather than a societal one. So I think for other institutions, like the University of Adelaide, or the government, to lay claim to this as something we’re all accountable for is really important,” he says.

John tells CityMag he plans to speak with South Australian Attorney-General and Minister for Aboriginal affairs, Kyam Maher, about how the Malinauskas Government will contribute to Wangayarta’s future.

“I think now that he’s seen this, he wants to have a chat,” he says.

“So I’m confident that the Labor Government will want to support this, not just for Kaurna but for any Aboriginal community needing to do it.” 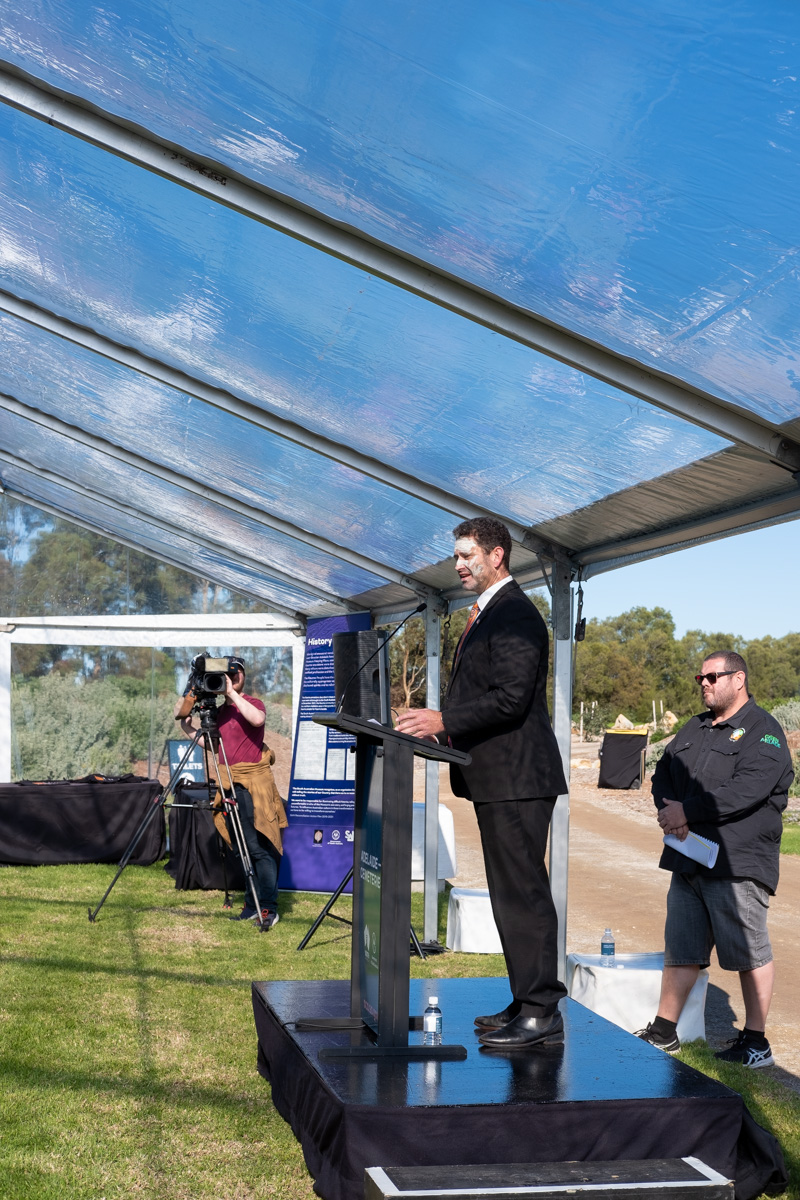 After carrying remains to the western mound, Kyam, who is South Australia’s first Aboriginal Affairs Minister with Aboriginal heritage, tells CityMag he has “already had a number of discussions, [and] we’ll have some meetings over the coming months to see how we can best carry this forward”. Though he doesn’t offer specifics on how the government plans to be involved, he does says he’ll “have discussions about” taking the Wangayarta model to other sites.

New CEO of Adelaide Cemeteries, Michael Robertson, who oversees cemeteries at Smithfield, Enfield, Cheltenham and on West Terrace, said there were no plans for new First Nations burial locations on any of his organisation’s other sites. But he says Cemeteries has been approached by “other councils, interstate people as well”, enquiring about the process of establishing a First Nations burial site.

Madge tells CityMag she’s aware of some Aboriginal communities having early discussions about potential sites, which she’ll support in their development.

“The Riverland, they’re in the process of actually doing that. So they just need a little bit of input and a little bit of encouragement. But it’s scary for them also. It’s a scary process,” she says.

“I feel good that I can help my other communities, too. I want to strengthen them and tell them that it’s not scary. It’s something that we need to do, and if we do it all together, it’ll be easier for us. 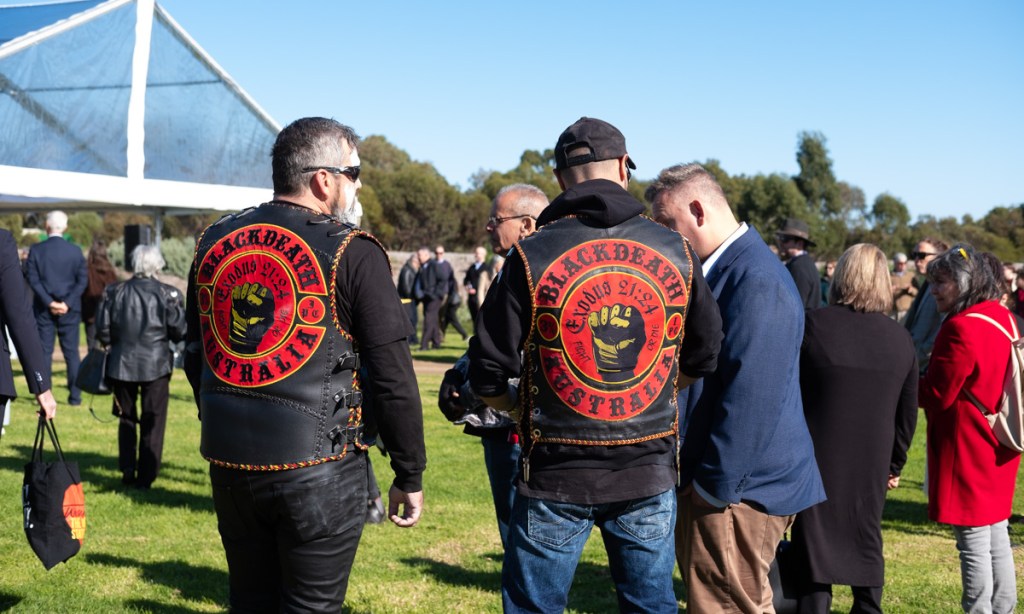 Black Death IPC were in attendance for the June reburial

On the day of the first Wangayarta reburial, Uncle Jeffrey told CityMag he felt “a bit uncomfortable”. It “hadn’t been an easy road” to get the site to fruition.

We ask if the process was any easier the second time around, and he breaks into a laugh.

“The beauty is I’ve got grandchildren now who can take this on. It’s not easy, because I’ve got to go there and walk the journey with other Aboriginal nations, and the non-Aboriginal people living on their Country to do it together.

The planning for the June reburial began the day after the inaugural event, Aunty Madge says. The process takes about six months, and the next one is already in the works.

“It’s happening,” she says. “We’re going to knock on that door. I want to get them all out. They’ve been in there long enough.”