After a shock funding cut to the Student Representative Council and the announcement of upcoming faculty mergers, students are fighting back. 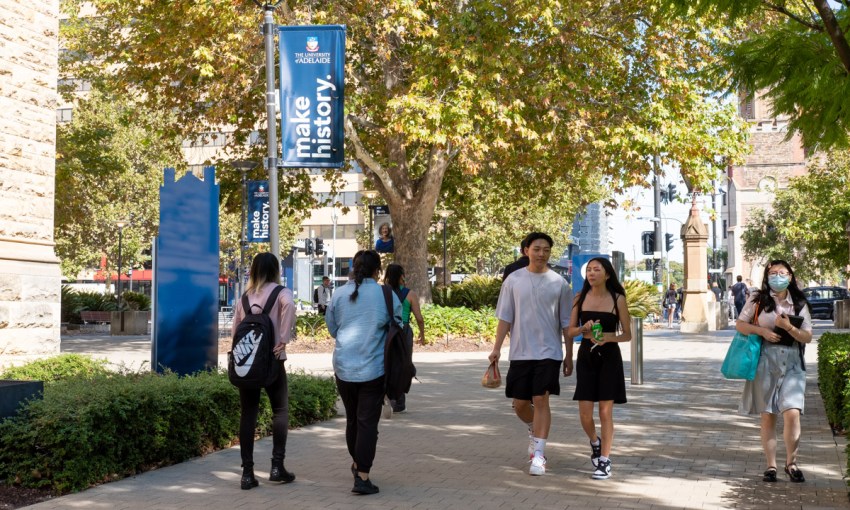 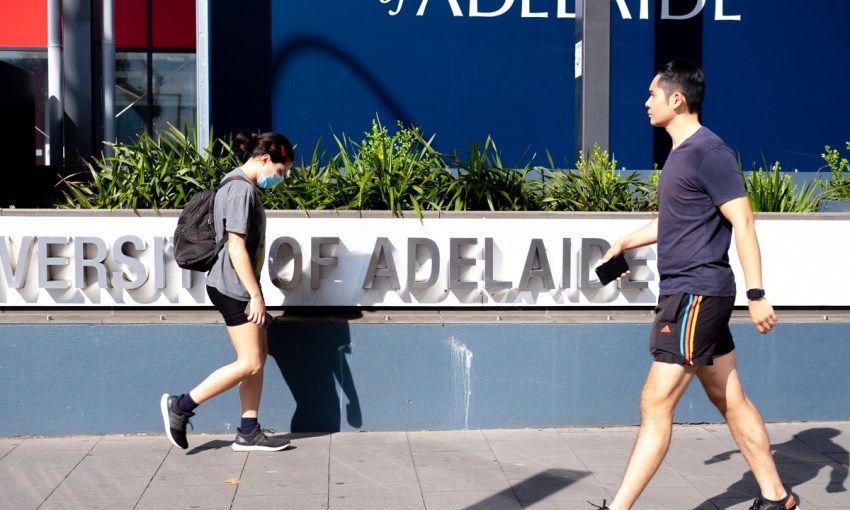 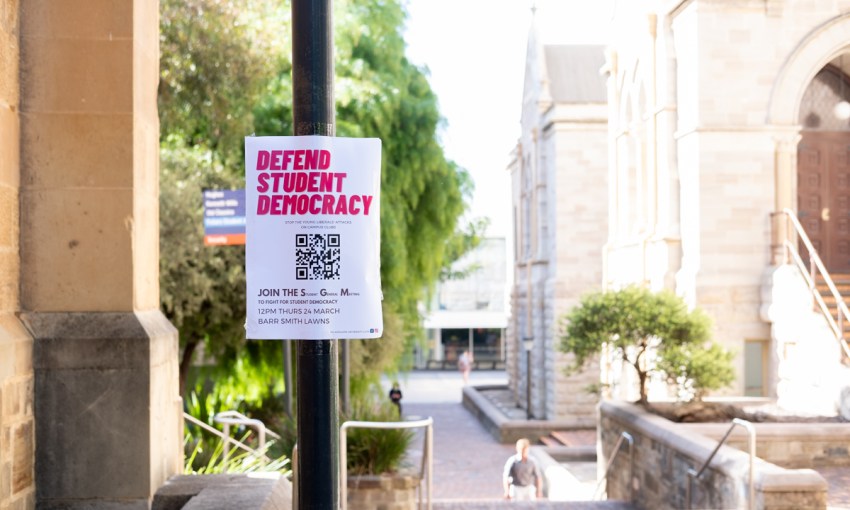 Student opposition to the proposed staff cuts and faculty mergers at the University of Adelaide has come to a head, as the Student Representative Council (SRC) prepares to hold a Student General Meeting to pass a motion of no confidence in both the University Council and Vice Chancellor Peter Høj.

Student General Meetings are democratic forums in which students can organise and discuss issues affecting them and vote on plans of action. The rarity of the meetings have made them a particularly significant mechanism in amplifying student voices against university leadership.

The No Adelaide University Cuts Campaign, an entity founded in 2015, has organised the Student General Meeting on the Barr Smith Lawns at the University of Adelaide on Thursday, 24 March with the help of the SRC.

Students will be asked to vote on the motion of no confidence in both the University Council and Vice Chancellor Peter Høj, alongside halts to staff cuts and faculty mergers, and funding the SRC directly through the university.

If the vote passes, these demands will become legally binding for the SRC to pursue.

The mergers, which go into effect on 28 March, were confirmed to students in an email earlier this month.

Education Officer for the SRC, James Wood, has actively campaigned against the cuts since they were announced midway through last year.

“We condemn university management because they have the arrogance to attack our quality of education,” Wood says.

“We condemn them because they are corporate bosses who run the uni in a highly undemocratic fashion… It’s all about profit making.” 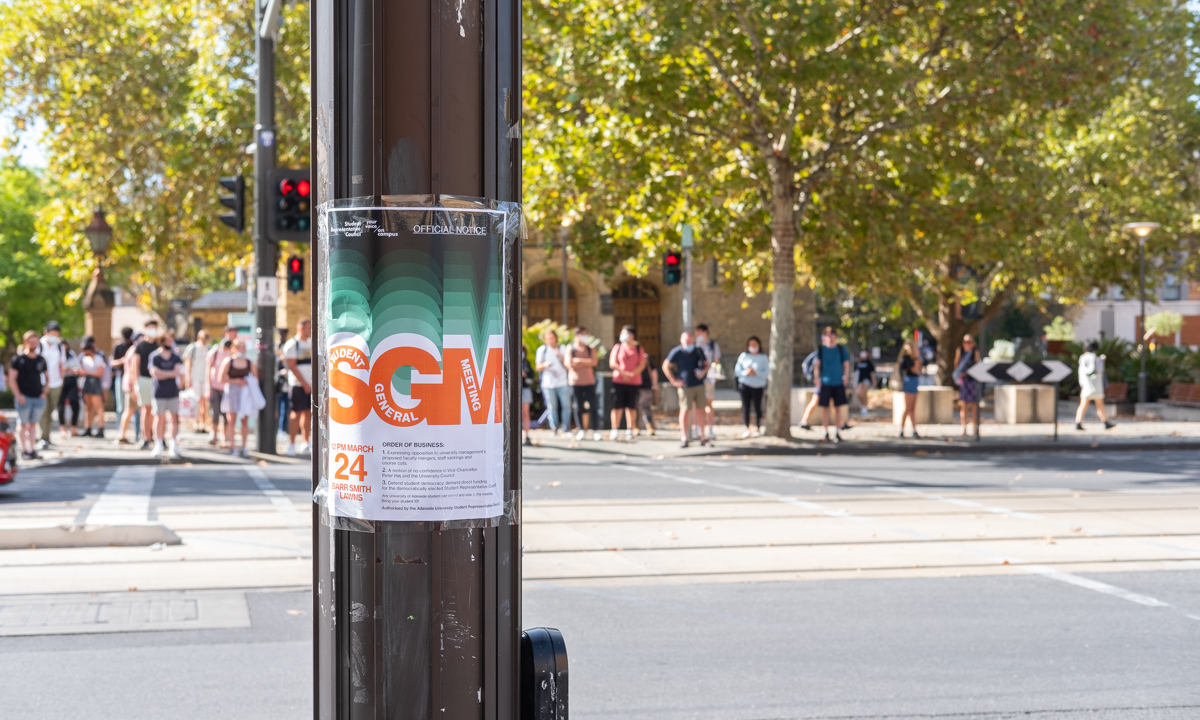 The initial aim of the General Meeting was changed after the Adelaide University Union suspended the funding of the SRC, with activists now calling for the SRC to be funded directly through the university to circumvent the Union’s authority.

“The experience with the undemocratic funding agreement has made it clear we can’t trust the board to do what’s right by us, we are essentially held hostage by the SRC’s affiliation to them,” Wood says.

Peter Høj stated in an email to students after the cuts were announced that the cuts were agreed upon after consultation with both staff and students.

“The measures we are proposing are unlikely to impact your current studies,” he said.

“We would rather not propose these measures and do so with regret, but we judge them necessary to ensure our university can face the challenges before it.”

Wood is not convinced.

“The state of things at Adelaide now are already bad enough, with months-long waits for student counselling, a library service in decline and casual tutors who are severely overworked and underpaid with no job security,” he said.

A spokesperson for the University of Adelaide said counsellor numbers at the institution have increased from 9.6 full-time equivalent staff (FTE) in 2020 to 10.5 FTE in 2022.

“A student who feels they need to see a counsellor as soon as possible would be able to see someone on the same day, or within one to two days, depending on urgency,” the spokesperson said.

The university is likely to face a shortfall of $47 million by 2023, with the lack of international students being able to attend campus due to the COVID-19 pandemic being blamed for the loss. The university did record a statutory net operating surplus of $40.8 million for 2020. A university spokesperson stated last year the excess is for research funding only.

The last Student General Meeting was held in 2015 after the announcement the Centre for Aboriginal Studies in Music was being cut, with the students passing a motion of no confidence in Executive Dean of Arts, Jennie Shaw (now Deputy Vice-Chancellor Academic).

“[The meeting] sends a signal to management and the right-wing Union board that there is mass opposition to the cuts that they are going ahead with and that the board is defending,” Wood said.