Willy’s Wine Shop is slated to launch in June.

Adam is a Hyde Park local and has experienced the need along the suburb’s premier shopping and dining strip, King William Road, for a decent wine bar.

“Because I’m a local, I know there’s nowhere along this street that I can just pop down and have a wine,” Adam tells CityMag.

The chef’s fix for this problem is Willy’s Wine Shop, which will open at the northern end of King William Road, in the space formerly known as Plant B Life.

“I want Willy’s Wine Shop just to be an extension of my home,” Adam says. “It feels like a really casual atmosphere, somewhere you can have a single glass if you like, or you can sit and drink three bottles if you wanted to.”

The wine list will be “eclectic,” Adam says, with an aim to suit a varied demographic, from the young and natty-focussed to the older and more traditionally minded.

“We did it so well at Lockwood… that space can have a grandma with her daughter and her granddaughter as well, and everyone feels comfortable there,” Adam says.

“I want a space that is sophisticated enough that my mum would feel comfortable in, but somewhere that me and my friends would like to drink in as well.”

There will be food, too. Once the wine offering is locked in, Adam will create a complementary small plates offering, but the intention is to not draw attention away from the booze.

“I’m going to do a huge cheese cabinet that just has an amazing selection of cheese, and you’ll come up and say, ‘I want 50 grams of that, and 100 grams of that’, and we’ll snap you off some bread and bring it out to the table,” Adam says.

“I want to do really beautiful little small plates of cured fish. Just small, little things that would pair well, even prior to dinner.

“And if someone wants [more] food, I’ll be saying, ‘Take a wander down the street. There are some of Adelaide’s best restaurants just down the road’.”

Adam has partnered with Jess and Darren Packer for this venture, who own Nature’s Providore, Nature’s Living and Nettle & Knead in Malvern. They originally approached Adam with the idea of opening another café, but the chef had his mind set on an evening concept.

This is partly to not compete with either his or the Packers’ existing businesses, but also because nighttime trade was originally part of the Lockwood General concept.

“As proud of what I did at Lockwood as I am, it feels a little bit unfinished, because the initial dream was to do the night trade, and it’s just not feasible in the foreseeable future,” Adam says.

The Burnside venue, which is in a very residential area, on the corner of High Street and Lockwood Road, is a difficult proposition for nighttime trade because of its location. King William Street, on the other hand, is primed for additional foot traffic in the PM.

“I actually believe this is one of the most un-utilised streets in the country, probably – and especially after spending millions on the renos that they did here,” Adam says.

“I’m really hoping that after dinner or before dinner, people will come and have a wine and join us, and then wander down the street and then see the local clothing stores that are here, and see the hairdressers, and activate the street that way.” 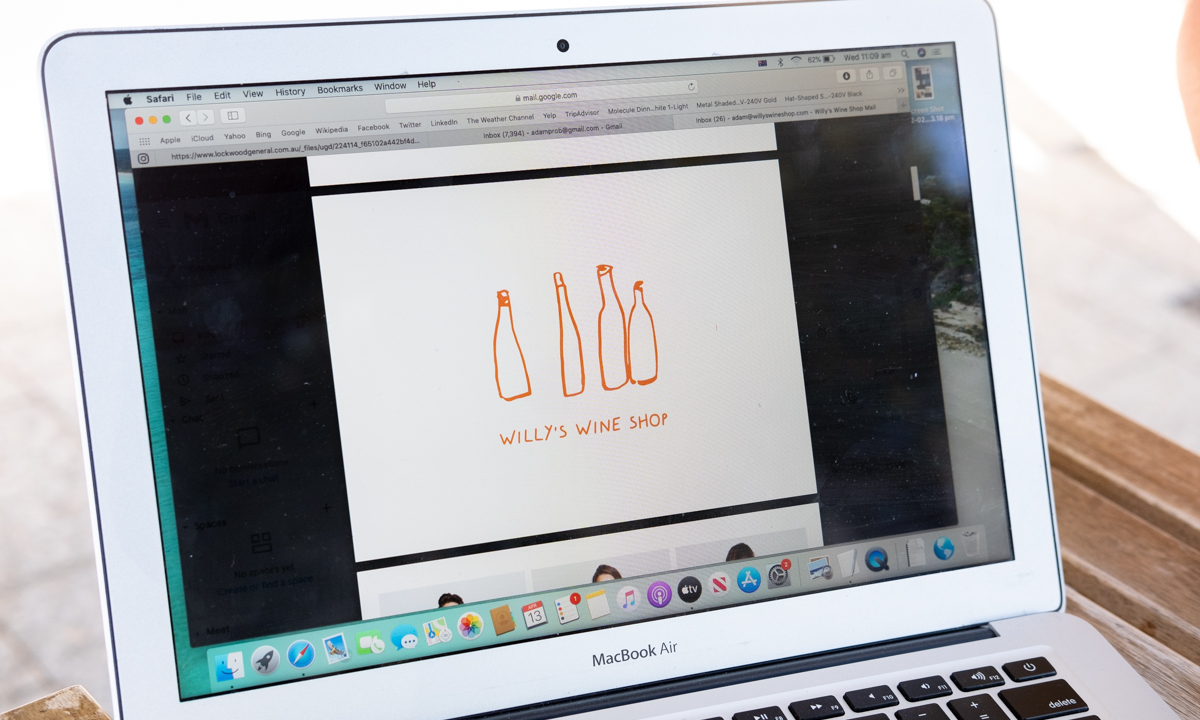 Willy’s Wine Shop’s branding has come from Studio Maja, a mother-daughter team of Mo and Lulu Hardy, who have recently supplied branding assets for Fishbank and the Cremorne Hotel.

“I found that after I’d named it, though,” he says. “And I love the art, because they sell art there as well. That was a complete coincidence, actually.”

Interior design for the bar and bottle shop will be a joint project between Adam and Jess.

Adam has brought on Courtney Price, formerly of Fugazzi, as Willy’s Wine Shop’s venue manager, and he hopes to have the business up and running “sometime in June”.

The key to its success, he says, will be in the ‘big vibes’ (as per the branding) Willy’s Wine Shop provides.

“We need to build relationships in this neighbourhood,” Adam says. “A lot of these people have wine cellars at home. They need to have a reason to come and drink our wine, and that is not going to be the wine itself – it’s going to be the atmosphere we provide and the service that we provide.”

Willy’s Wine Shop will trade midday ‘til late Thursday through Sunday. Follow along with Willy’s journey to opening by connecting with the business on Instagram.