The rise of filter coffee

Adelaide’s coffee scene has long been dominated by espresso, but a more elegant and interesting style of coffee is on the rise in Adelaide. In 2022, filter may finally take its crown.

It started with the unassuming appearance of a thermal jug atop the counters of a couple of CBD cafés. Inside was a familiar beverage, produced in a novel way – at least for the mainstream Adelaide market. Slowly, from café to café, the jugs spread.

The vessels hold filter-stye coffee made from high-quality, locally roasted beans, percolated in batches large enough to serve a handful of people. Over the last couple of years, café operators have reported batch brew, as it’s known, being an increasingly popular order among their clientele.

This is the moment café owners – particularly those who are also roasters – have been waiting for. Since the current wave of boutique coffee began almost a decade ago, they have been arguing the case for filter as a more expressive coffee product.

But it hasn’t always been an easy sell.

When Brad Nixon first opened his CBD café and roastery Elementary in 2016, the business had a “predominant filter offering”.

The café offered pour-over coffee, which is a more time- and labour-intensive method. Rather than hitting go on an automatic percolator and having five serves of coffee prepared 10 minutes later, a barista will spend roughly the same amount of time on a pour over for the sake of a single serve.

Launching Elementary with filter in this format was a play to the coffee nerds, but not one that lasted.

“It sort of slid to the background a little bit,” Brad says. “[Due to a] bit of a lack of interest, really.”

But batch brew is now “flying out the door” at Elementary, Brad says, which he attributes to “convenience more than anything”. 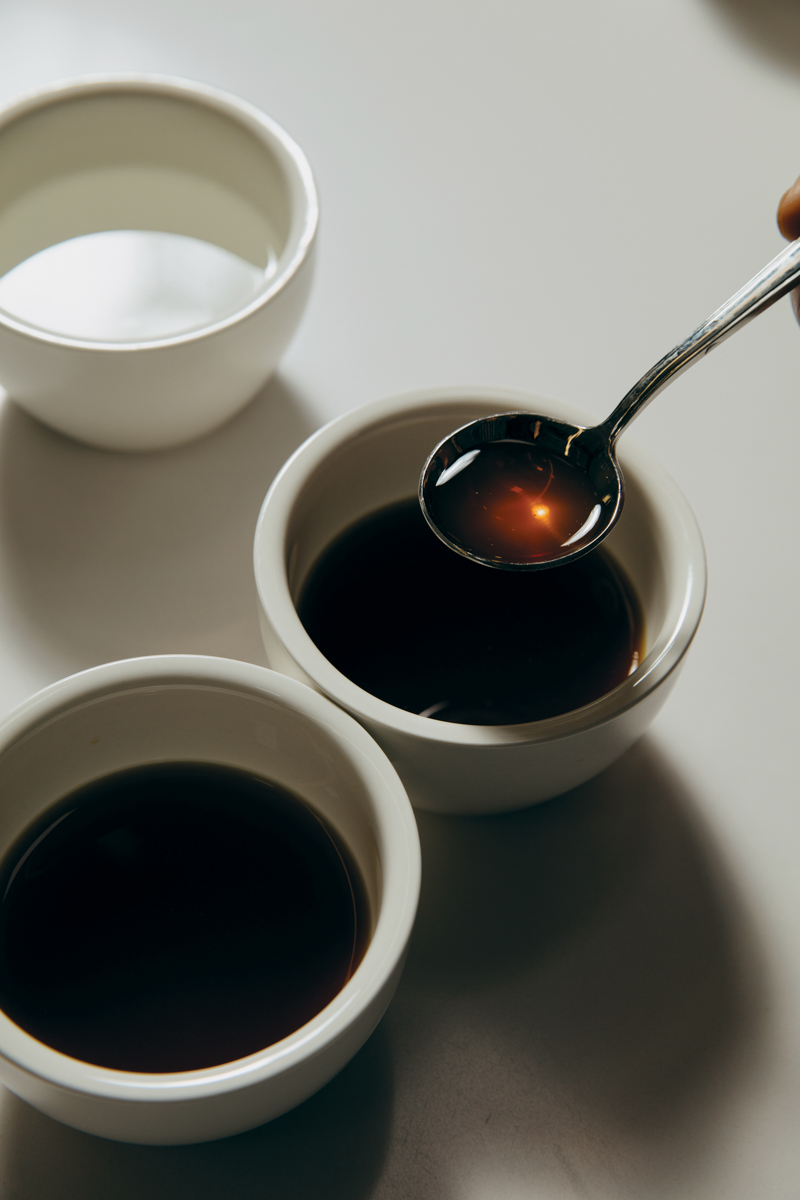 But there are additional benefits.

For those who don’t enjoy the punchy flavour of black espresso-based drinks, created by forcing water through coffee grounds at nine bars of pressure, the extraction method used for filter coffee – pouring water over grinds and letting gravity do the rest – results in a lighter and more expressive end product.

This is a perfect option for someone who is looking to move away from milk but is intimidated by the heftier black espresso drinks, which is a trend Fraser Monfries of Pogo Coffee Roasters is noticing in his Ifould Street café.

“Batch brew is taking off as people move away from milk coffee, I’ve found,” he says. “I don’t know whether that’s just my perception in here, but all milks in general seem to be reducing.”

And while a filter brew is still recognisably black coffee, there are often brighter fruit characteristics that make for a softer entry point.

“It’s just so easy to drink,” says Sean Do, co-owner of Coffee in Common in Hindmarsh. “Most people are able to pick up subtle notes of something, whereas espressos normally can go the opposite way, where all they taste is bitterness or acidity.” 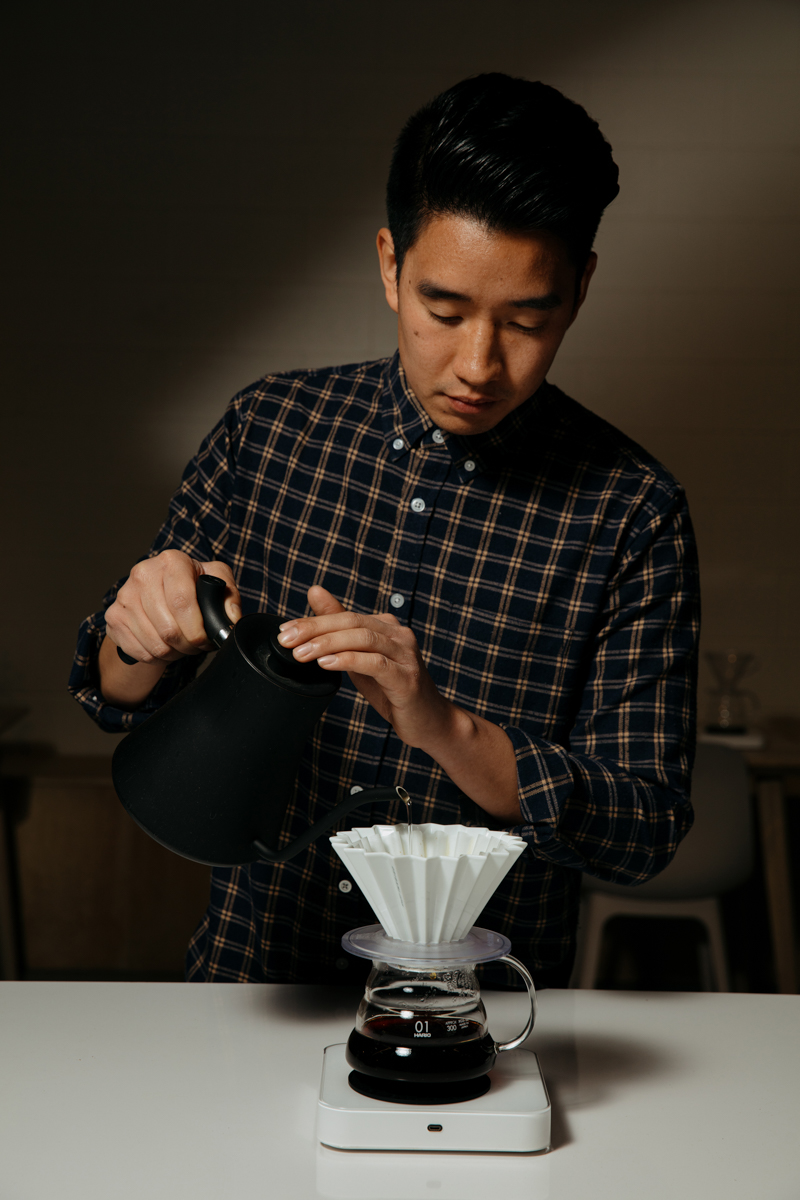 Sean Do at Coffee in Common

Sean founded Coffee in Common in Melbourne in 201, having moved there from Adelaide a few years before that. Unlike Adelaide, the eastern seaboard city at that time was already deeply fascinated with filter coffee.

“Over the years, Adelaide sort of got there, and we’re sort of at that point where people are on the filter coffee a lot more, on the single origin a lot more, which is great.”

Origin plays a significant role in the end product of a filter coffee.

“By maintaining those compounds formed early in the process of roasting, you can maintain more of the natural balance of compounds that were formed in the plants’ life cycle. These are presented in the cup, allowing a glimpse of what the coffee has to offer from its origin.” 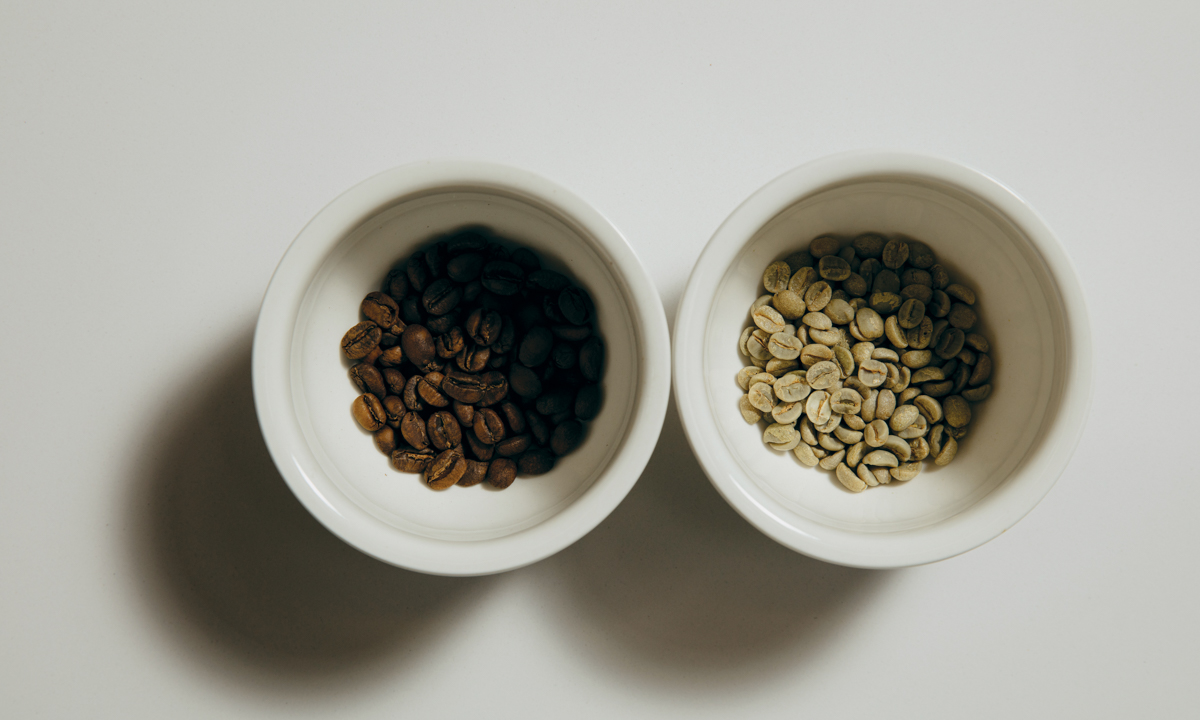 As more Adelaide consumers are exposed to the expressive flavour profiles of filter brews, general understanding of how origin influences flavour is expanding.

“People understand, ‘Oh, Ethiopia. You’ve got it.’ We’ll sell buckets of that,” says Emily Raven, founder of My Kingdom For a Horse. “People are going to gravitate towards it because they know they’ve got a nine out of 10 chance of it being something that they understand. I guess it’s a little bit like buying wine.”

And, like wine, once a consumer has an understanding of place, there are deeper depths in which to dive, such as soil types and processing methods. Both can have a dramatic effect on your cup of coffee.

“Costa Rica’s a very good example, because they pioneer all these amazing processing techniques that removed water, and they ended up with these products that tasted really different and funky, like the natural wine movement,” Emily says.

“Their whole ethos is about preserving the environment and doing the right thing so they’re not sending dirty water back into the ecosystem, because they don’t need it.” 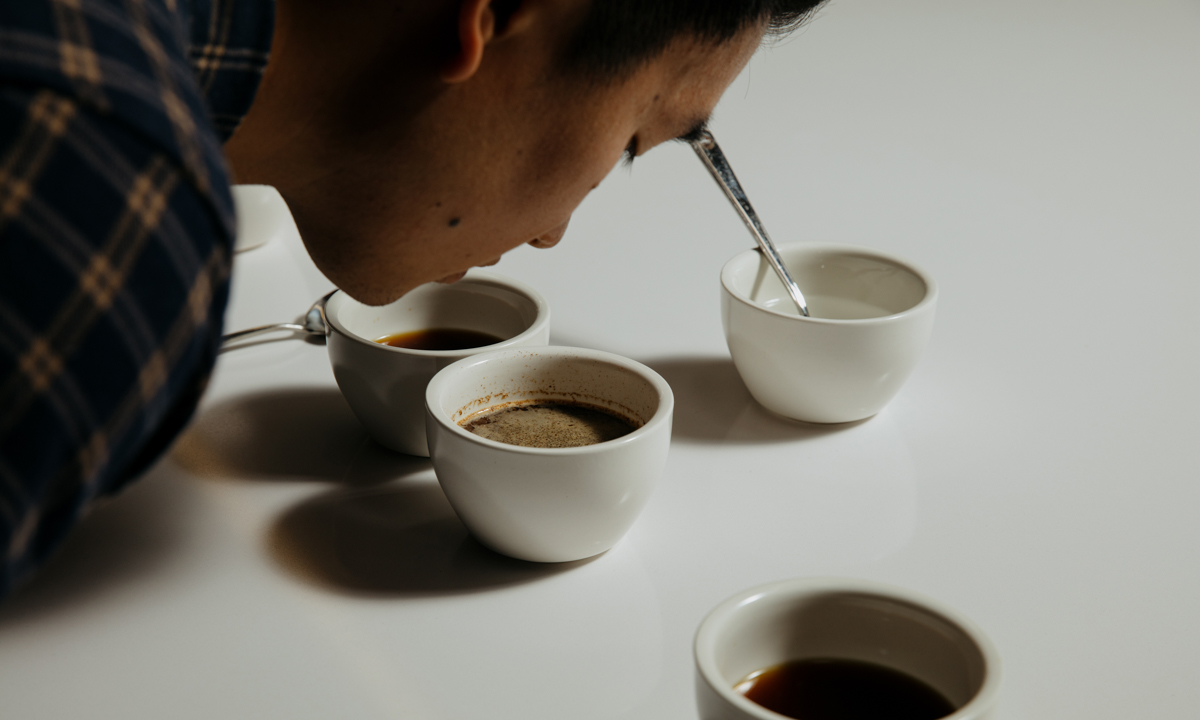 All of the roaster-operators CityMag interviewed for this piece agreed that the ultimate aim of communicating and fostering this appreciation of coffee as an agricultural product is to get more money to farmers at country of origin.

While batch brew, given its automated and high-volume nature, is generally priced similarly to an espresso product, pour overs – which most of the cafés we’ve mentioned offer – are more expensive. This is partly because of the labour involved in brewing, but also because the raw product is of a higher quality and price point.

Just as there are wine growers catering to bulk (low end) and boutique (high end) producers, there are coffee growers who cater to the commercial-scale and specialty markets.

But where a wine consumer expects some price differentiation based on quality (even from within a single winery’s range), coffee consumers are hesitant to move on from their sub-$5 cup.

This is changing though; Coffee in Common launched with scaled pricing. An espresso drink is $4.50 (before milk alternatives and the like are added), a batch brew is $6, a pour over $8, and the range of coffees from Ninety Plus, a coffee company with farms in Panama, is priced between $12 and $100.

“I think we’ve priced all of our coffees where it should be. It’s not too expensive, but it’s not cheap,” Sean says.

“We’re very grateful that we were able to do that from the beginning, and it’s helped us build a reputation and also a following of great customers that are willing to spend a bit more for a quality product.

“People that come here are naturally wanting to buy something a bit more expensive or a bit more unique from their everyday coffee.” 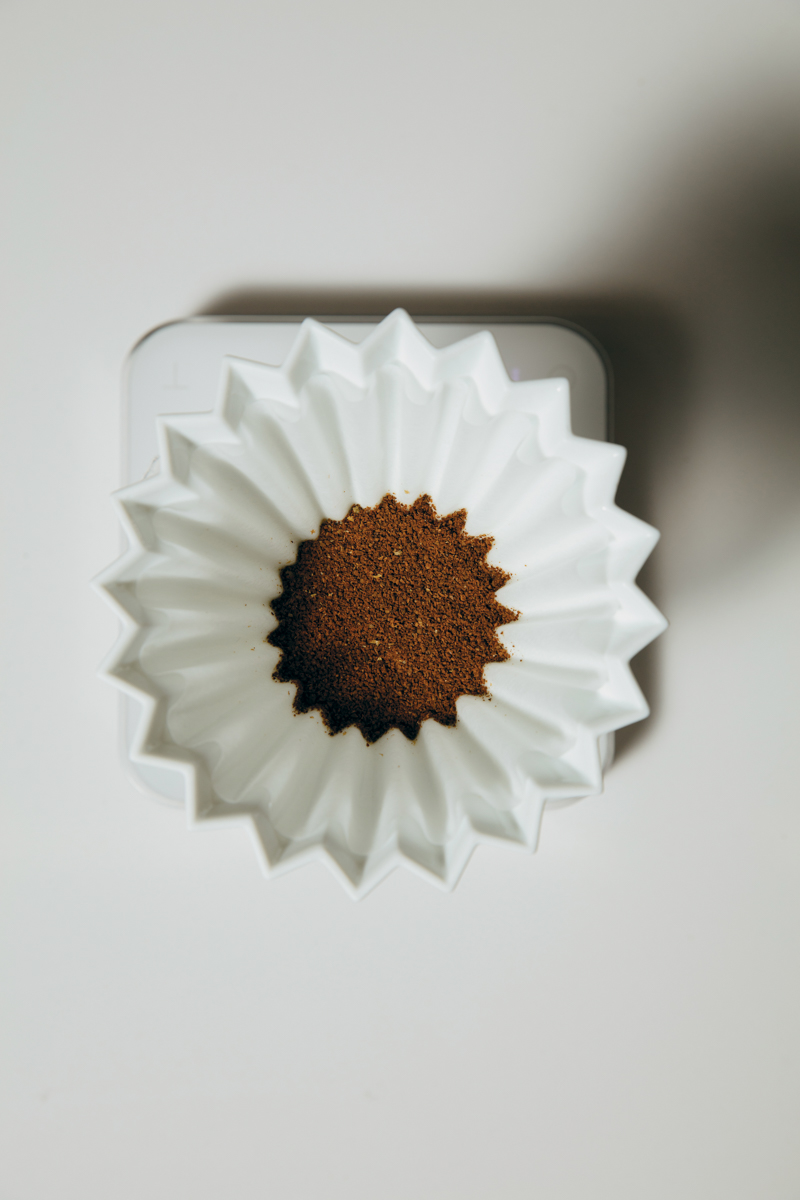 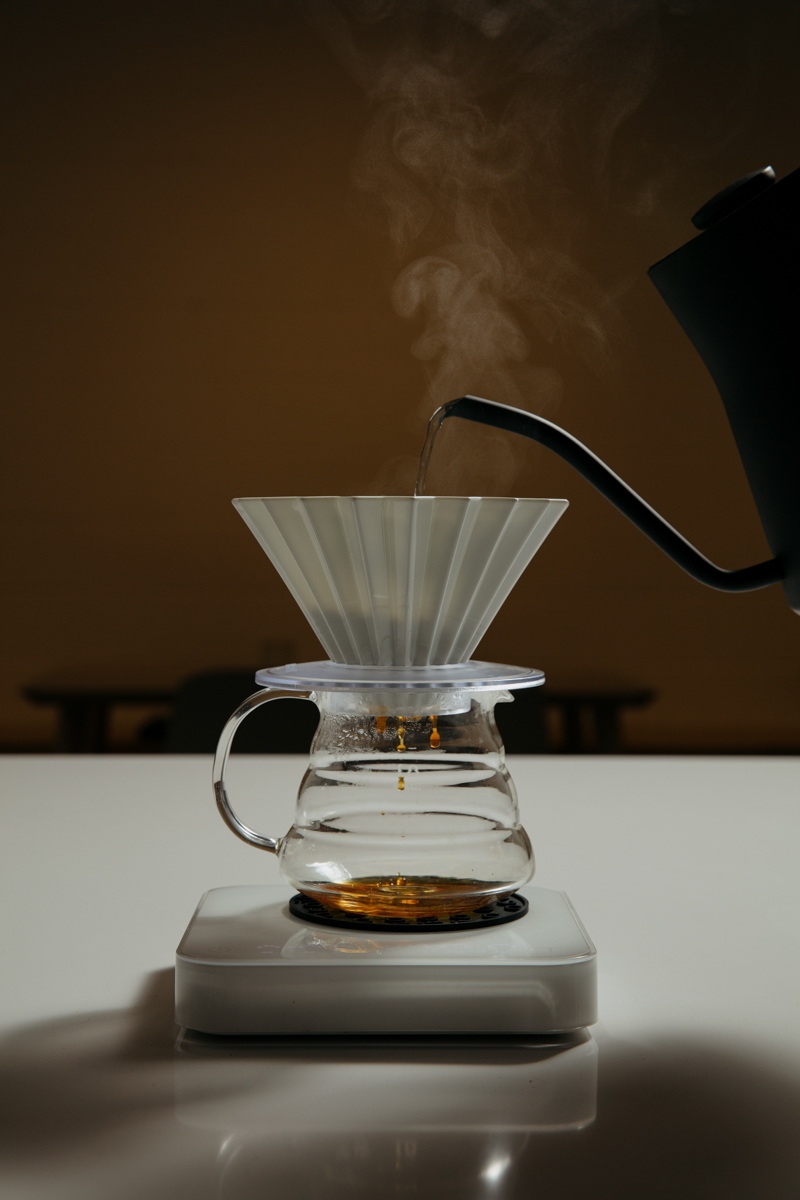 My Kingdom For a Horse scales their coffee prices similarly, from $4.50 for basic espresso drinks to $8 for a pour over. The number of people ordering a filter coffee at the Wright Street café has remained fairly static, Emily says, averaging one or two per hour on a typical Sunday. But she can tell the message is starting to spread.

“I always like to put things through the Dad Test,” she says.

“My dad’s in his mid-70s and he would never have dreamed of drinking filter coffee, but when he comes in and has a meal here, he has a cup of flat white, but then he also says, ‘What have you got on filter at the moment? I’d love to have that.’

“A lot of people do that. And not just the geeks.”