Step inside the Uraidla Hotel’s underground library of ‘liquid knowledge’

A disused rainwater tank at the Uraidla Hotel has been transformed into an underground cellar door, stocked with hyper-local wine and bottles from the personal collections of Adelaide's favourite winemakers.

Prior to its extensive makeover, the early-1900s-era rainwater tank at the Uraidla Hotel had seen better days.

“It was falling apart and not really in the best shape,” the pub’s Food and Beverage Manager Owen Colin tells CityMag. “It was just there and pretty ugly, really.”

What was once an old vessel “half-full of slugs,” has now been remade into a sparkling, modern tasting room, stocked to the brim with bottles of mostly South Australian wine.

“It’s a working cellar,” Owen says, “and when you’re down there, you see possibly bottles or labels that you’ve wanted to try for forever, and you didn’t pick up [previously] from a wine list.

“Being able to physically pick up a bottle and look at it – it’s so much more tangible and so much more fun to choose a wine that way.”

Owen says hoteliers Ed and Julie Peter – who own Uraidla Hotel, Crafers Hotel, and CBD rooftop bar and restaurant 2KW – had discussed the tank’s revitalisation since 2017, but finally dived into the project in 2020. 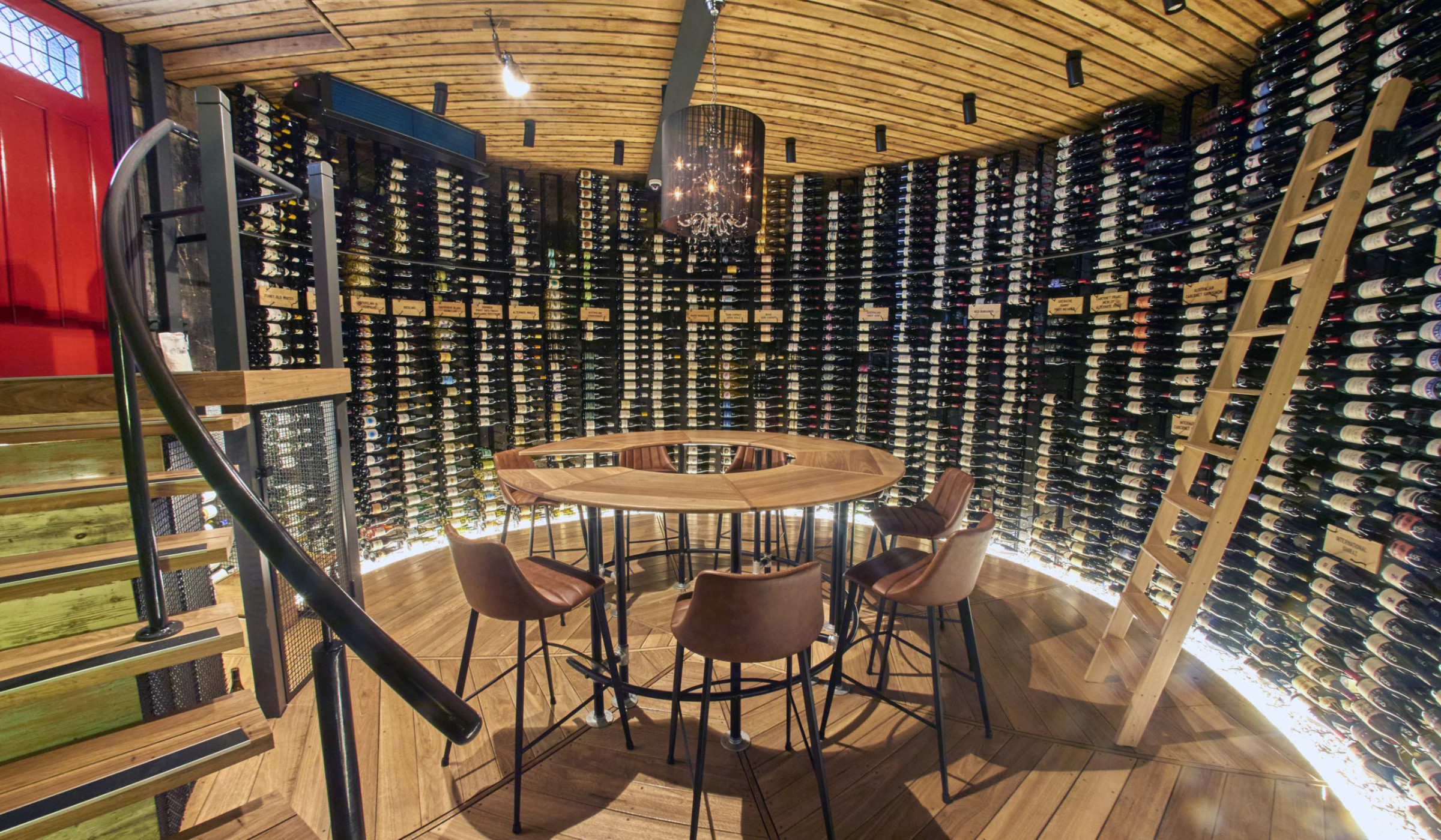 The transformation was anything but a smooth ride.

In April, ABC Construction was forced to halt work due to the first coronavirus lockdown, and even creating a functional room out of the disused tank was a more difficult task than expected.

“It was a massive challenge,” Owen says.

“There was no way we could seal all the way around the tank to stop water coming in, so it was more of [accepting the] fact that water will come in through the walls. That’s why they installed almost a floating floor and a spa pump.”

The result is an underground cellar door, filled with hundreds of bottles of vino – mostly from South Australia, and with a particular focus on the surrounding Piccadilly Valley region – and seating enough for 12 guests to enjoy a tasting experience.

And if you just want to go down for a look and a browse through the bottles, a staff member will happily guide you into the room.

“We’re going to do events down there as well,” Owen adds, saying “we’d love to do some intimate meet the maker sessions spread over 45 minutes.”

There’s no minimum spend for tastings, but Owen recommends trying at least two different bottles to compare your selections. A three-course dinner hosted in the room is also possible, as well as finger food to accompany your tasting.

“We’ve also got one section in the cellar that’s called ‘funky old whites and funky old reds’, and basically, through Ed Peter’s connections in the wine industry we’ve got access to some old wine [and] random stuff,” Owen says.

Some of the bottles in this section retail upwards of $500, but can be found in the cellar at a much more approachable price point. 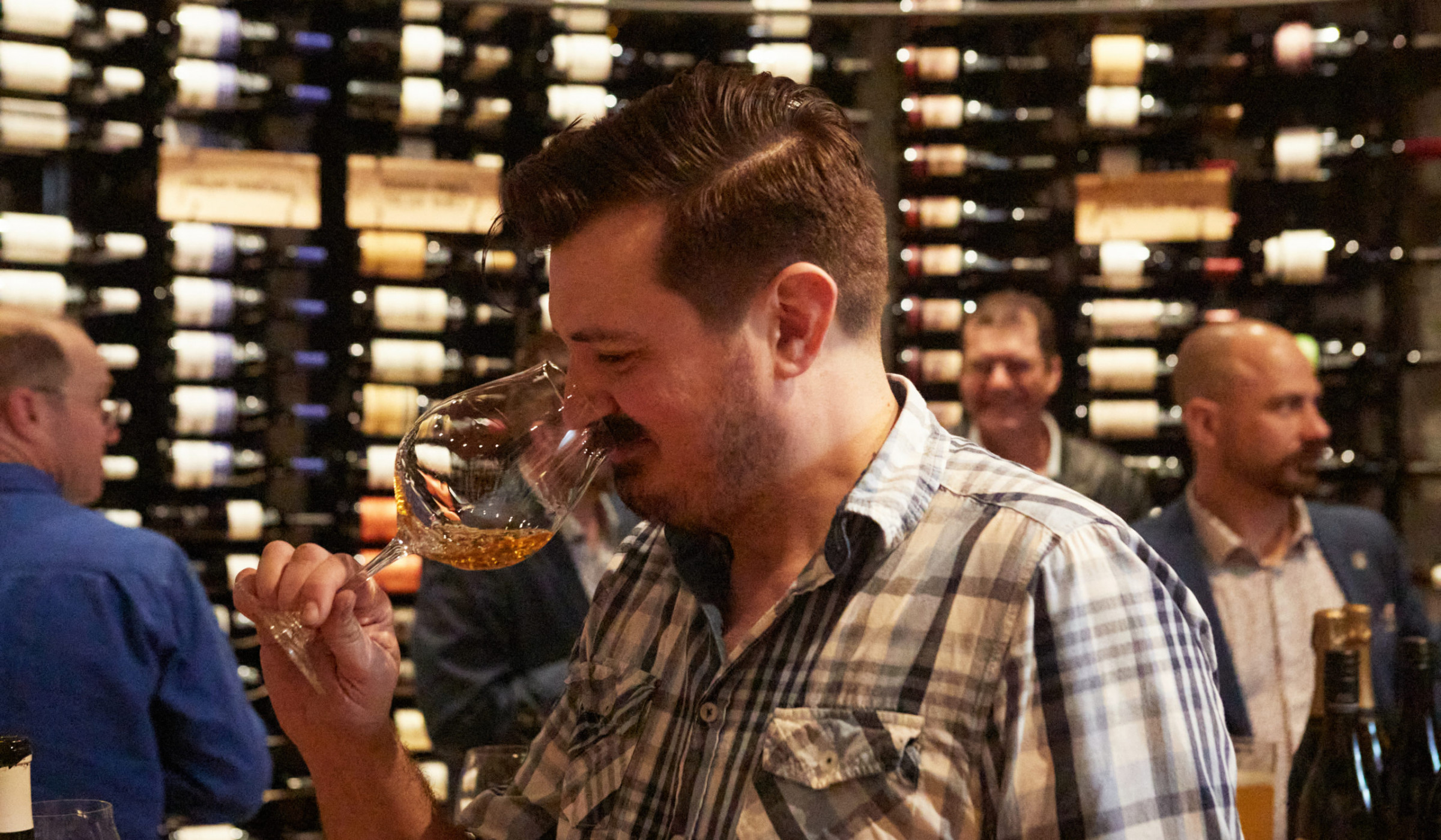 Owen Colin in his happy place

To Owen, the cellar is about more than drinking luxurious wine. It is a repository of “liquid knowledge,” he says.

Among the stories is the connection between The Tank and local winemakers Brian and Anne Croser of Tapanappa Wines, who cut the ribbon at the tasting room’s opening and whose wines can be found on its shelves.

“BK [Wines] as well,” Owen says. “Brendon [Keys] dug into his cellar and is giving me some vintage stuff, so we’ve got his single-site syrah he’s being doing biodynamically and released under a different name.

“Directly around us, we produce some of the best wine in the world.”

Find more information on The Tank at the Uraidla Hotel’s website.