Simon Bryant and the ‘informal excellence’ of South Australian hospitality

In his eight years of helping steer the Tasting Australia ship, Simon Bryant has always been guided by one central idea: bringing a bottle of Grange to Ying Chow.

Simon Bryant, the renowned chef and festival director of Tasting Australia, has been involved in the South Australian food and wine festival since its inception in 1997.

At that time, Simon was working in the Hilton as a commis chef and can remember prepping for a Tetsuya Wakuda masterclass the hotel’s restaurant was hosting.

“It was back in the day when people used to like to sit in chairs and watch chefs chop. It’s changed a lot how people have perceived chefs,” Simon smiles.

Tasting Australia was held biannually in its first decade, and over the years Simon went from working in the Hilton’s kitchen team for TA events, to managing those events, to then becoming featured talent in the festival as his media profile gradually rose.

In 2012, Simon joined the festival officially, coming on as creative director, and then in 2017 – the first time the festival ran in consecutive years – he came into his current role as festival director.

In joining the festival, Simon saw a great opportunity. His initial role as creative director didn’t afford him “the rocket launcher level of power,” he says, but alongside the festival’s wine director at the time, Paul Henry, the two envisioned how Tasting Australia could come to personify the idiosyncratic nature of South Australia’s hospitality industry.

“Sydney was all bling and Melbourne was all cool – that one thing South Australia had was this realness to it,” Simon says.

“What we wrote down, and I’ve still got the dog-eared notepad, is South Australians have this thing called informal excellence, where we’ll have a piece of marble score 13 wagyu at $400 a kilo and have it on a Sunday with your mates. Or a bottle of Grange at Ying Chow.”

This notion informed how the festival has come to exist on a sliding scale of price points that spans a quick $15 lunch from a food stall in Victoria Square to overnight stays in the regions stretching beyond $1,000 a head.

Tasting Australia was a big ship to steer, Simon says, but each year improves upon the next, with evolution being a constant.

In 2020, the Glasshouse Dinner series, now a key piece of the Tasting Australia experience, has shifted to be centred around six guest programming chefs, who have each picked their own personal dream team to cook alongside for a once-off dinner.

Where in previous years the Glasshouse events had several star chefs placed on a lineup together through the imperfect art of festival programming, this new format allows an opportunity for narrative.

“We always curated our menus so they flowed, so there was no produce overlaps and weird progressions, and a lack of harmony, and this is a logical extension of that,” Simon says.

“[With] Emma McCaskill, she went off and worked with Sat Bains in Nottingham, she also worked on Tetsuya’s hot line, and Darren Robinson was the exec sous, so her line up will be Sat, Darren, her and Maggie [Beer] – she used to watch Maggie when she was little. So it all makes sense. There’s a narrative there.

“It’s enabled six local chefs to tell their story of legacy and inheritance.” 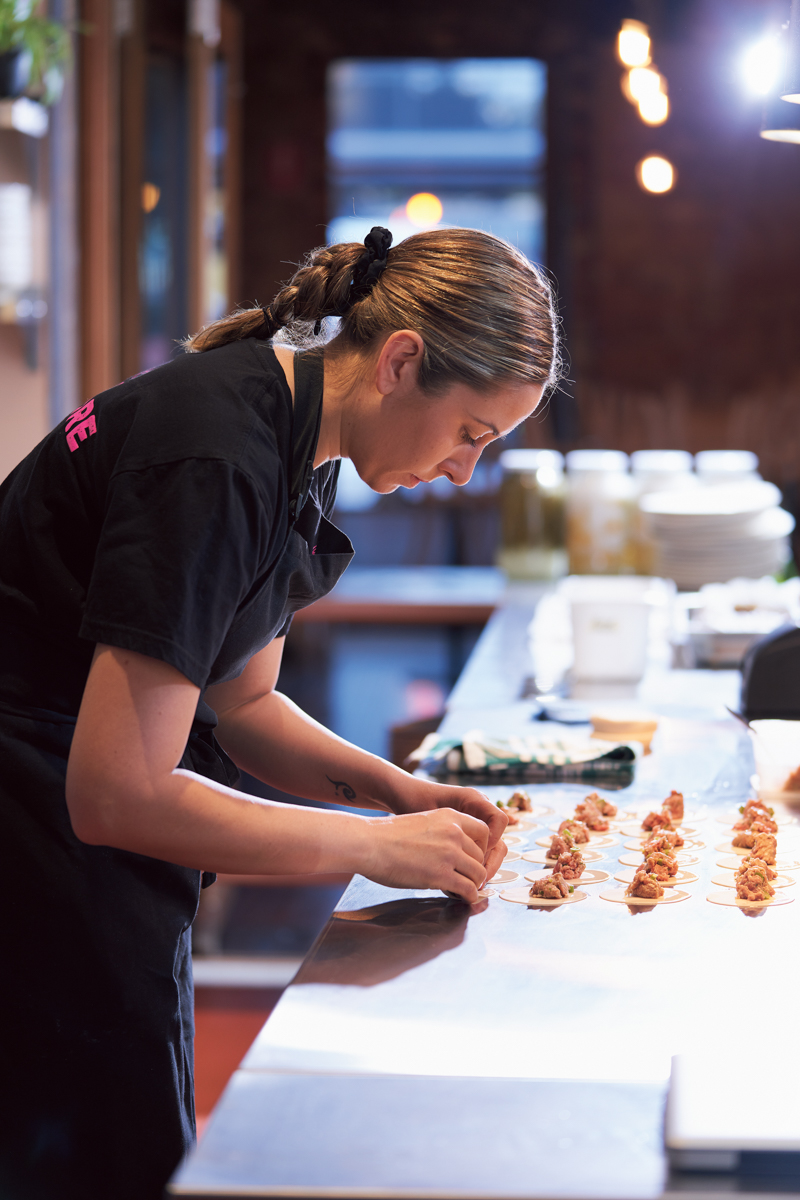 The festival has also made efforts to create a stronger connection to region. One mark of this is placing Marco Pierre White’s only dinner event out in McLaren Vale. (Alongside his CBD speaking and cooking demonstration events, Marco will be cooking alongside Duncan Welgemoed and Tom Tilbury at Coriole.)

The festival has also worked to raise the standard of its bar offering in 2020, bringing representatives from the spirits industry behind the cocktail bar. There will also be a stronger focus on mocktails and non-alcoholic fermented drinks.

When CityMag asks if Simon sees Tasting Australia’s responsibility as either to lead trends in local industry or reflect an image of where the industry currently stands, he first challenges our admittedly trite framing of the question.

“I don’t really like trends, because they infer that they’re going to burn up,” Simon says.

“But there’s general movements. And one of the movements was low-interference wine, another movement was distillation, another movement’s been a little bit less fiddled with food, more honest food, and I think we’ve all seen that on plates: less wizardry, more networking with suppliers and getting good product on plate.

“Zero-waste is really important. We all acknowledge, and it’s quite timely with what’s gone on this year, and terrible, but stuff like, we can’t public cater with compostable plates, because it’s lovely and we all had eco-ware back in 2012, but the reality is not much of it gets composted. So all public catering will be on a reusable plate.

“So you build those in as narratives, definitely, because they’re what’s guiding the state.”

In recognising the direction of the industry, the task of programming an appropriate guest chef lineup becomes easier.

“They become the goal posts or the out-of-bounds lines for who we bring,” Simon says.

“So this year, [Heidi Bjerkan], our Nordic chef… I hate this ‘zero-waste,’ it’s just a throwaway term, but [she is] walking the talk.

“And this is the big thing, anyone can bullshit about what they’re doing, and they’re very quick to change: ‘I’m offal, and now I’m vego, and now I’m zero-waste,’ and it’s just silly. But people who believe in it, have been doing something for ages, when that becomes a movement then you tap back into them.” 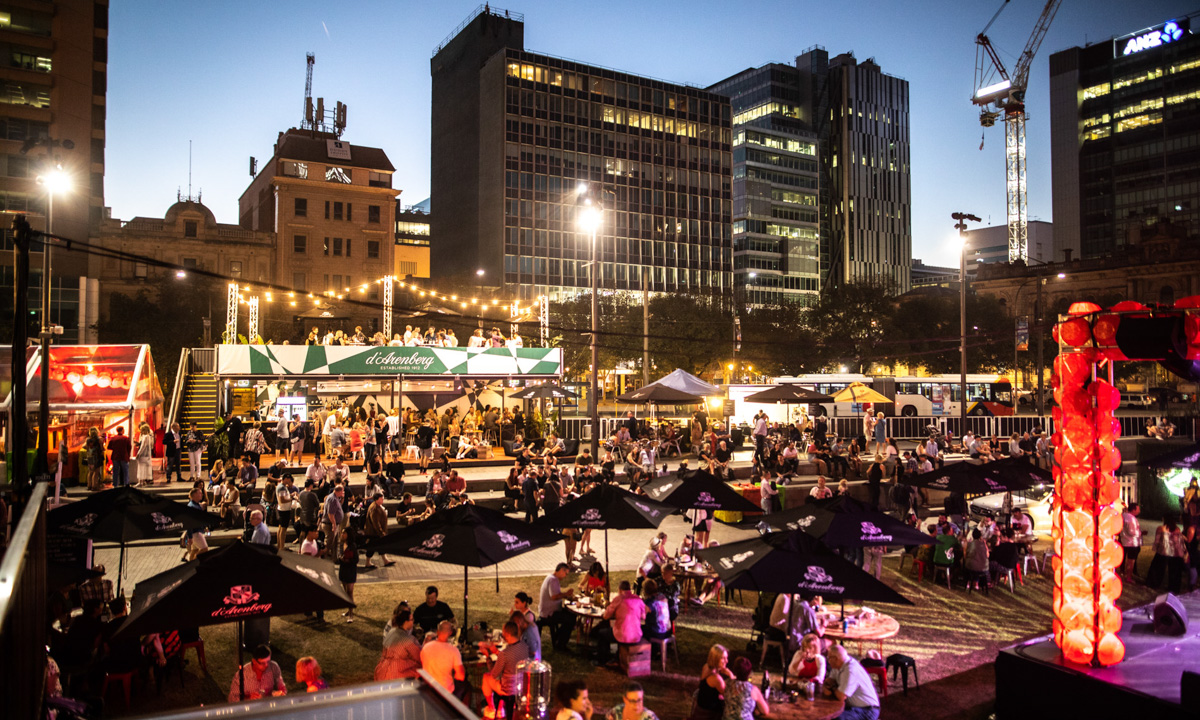 Adelaide is humble and self-effacing by nature. Our food scene has long stood as testament to this.

A food and wine festival that can capture our aspirations and ideals, our strange penchant for drinking Krug in the front bar of an East End pub, and then sell that identity to a national audience without coming across as arrogant or self-aggrandising is tough balance, but it’s the South Australian way of doing things.

“We’ve still got a sense of humour, we can still take the piss out of ourselves. I think that we’re not too cool for school.

“I also think that it all comes off the back of produce. If Nathan Sasi’s come here – I know there’s family reasons, and there’s a lot of people like this that came for a relationship, they’ve met overseas or whatever – but if a chef like that is coming back to Adelaide, that’s epic.

“I don’t want to be contentious; I won’t say we’re the best, but we’ve got nothing to be ashamed of, and I think we should start to be a little bit proud – and still take the piss at the same time.”