With new chef Shane Wilson at the helm, Anchovy Bandit has expanded its footprint and relaunched its menu, bringing a stronger focus on pasta dishes “inspired by but not bound to” traditional Italian cuisine. 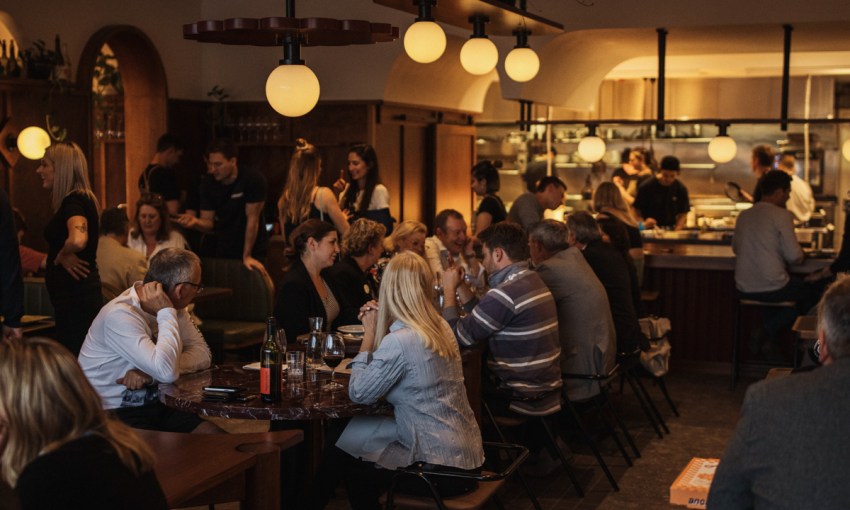 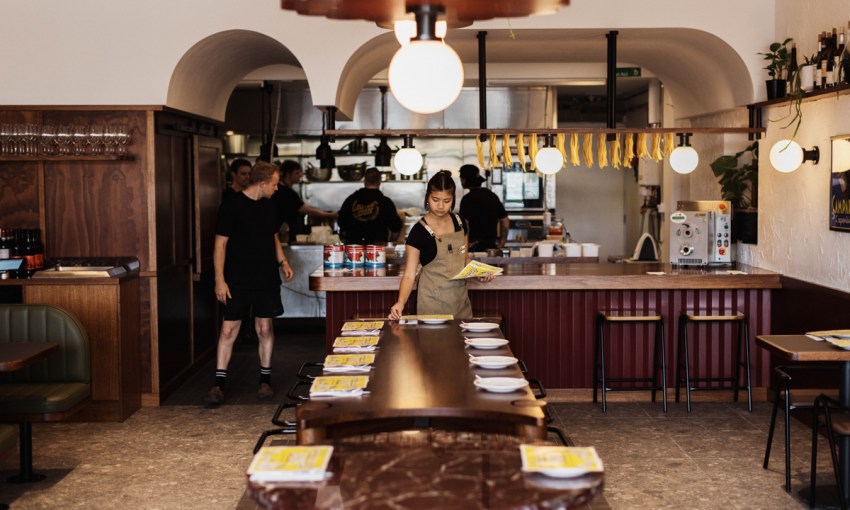 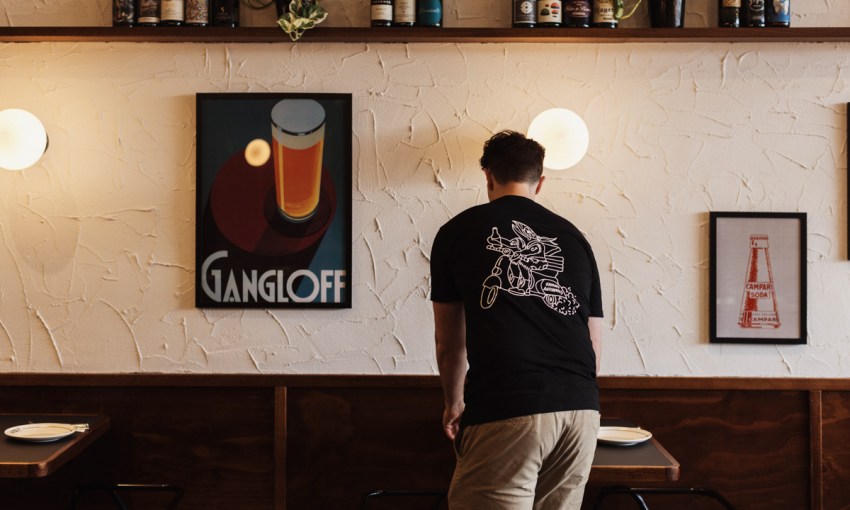 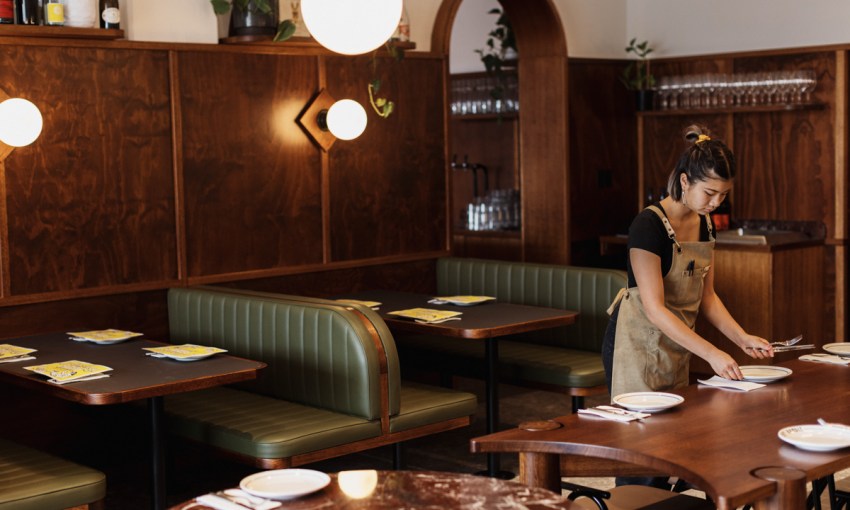 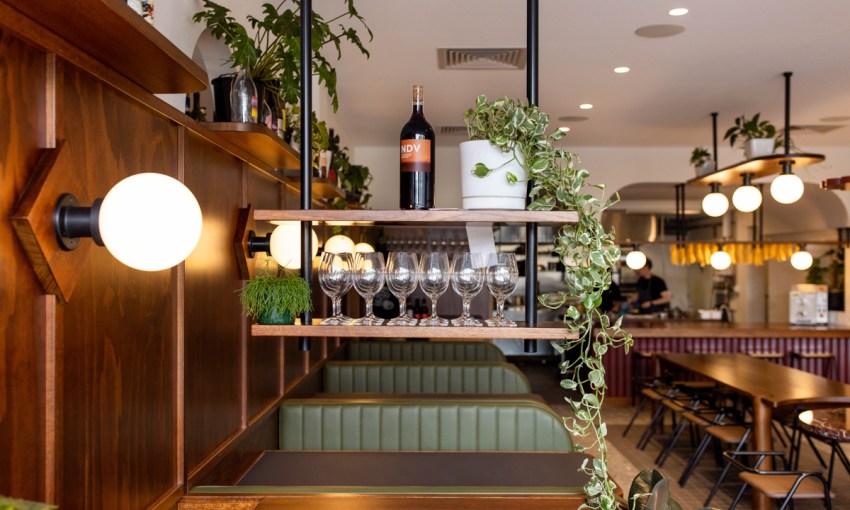 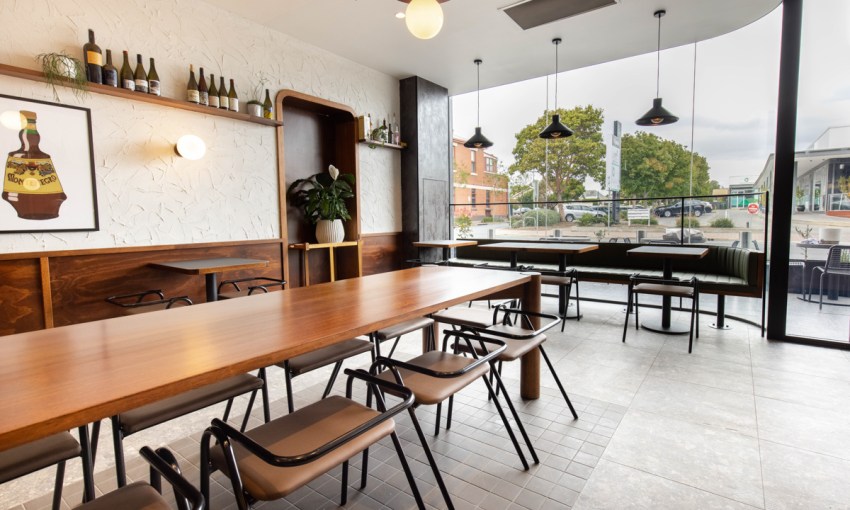 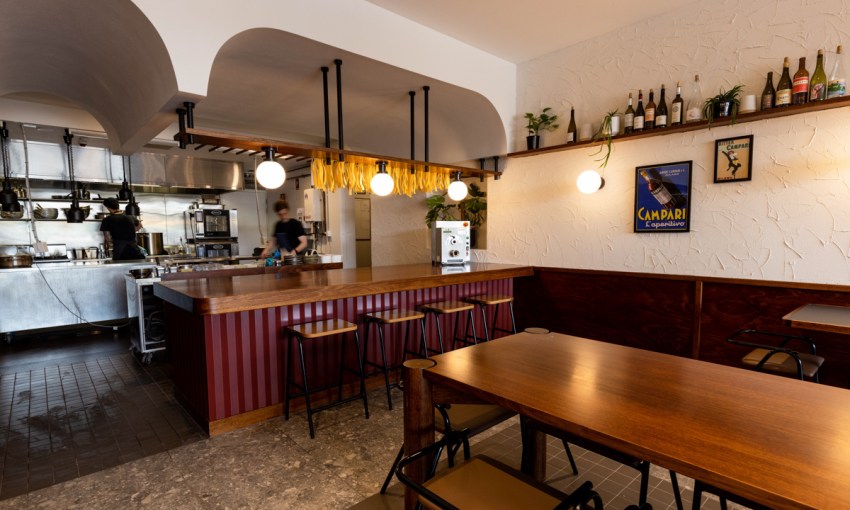 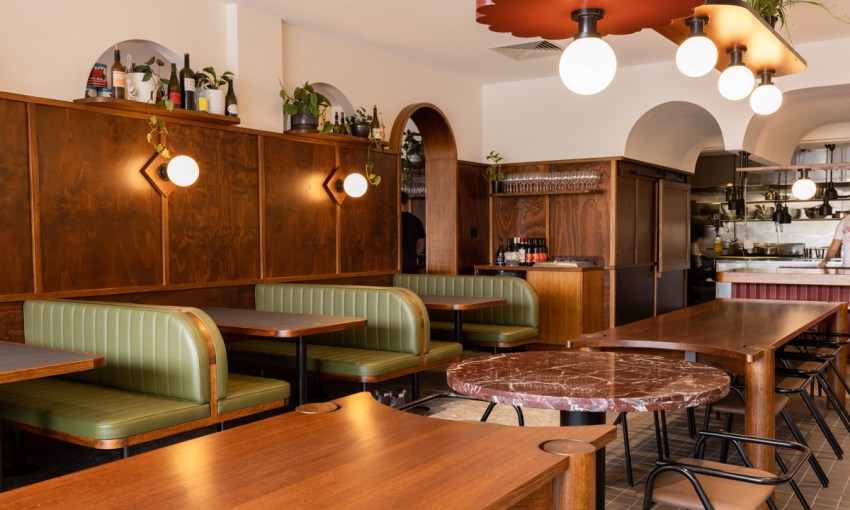 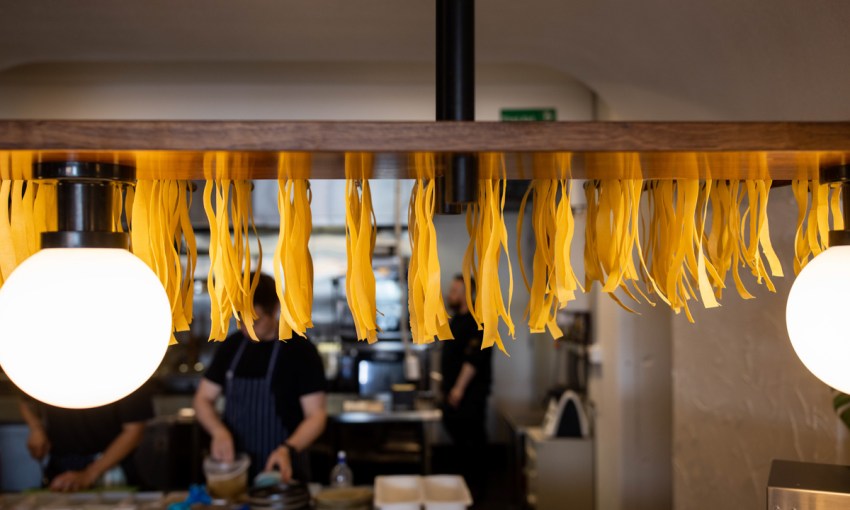 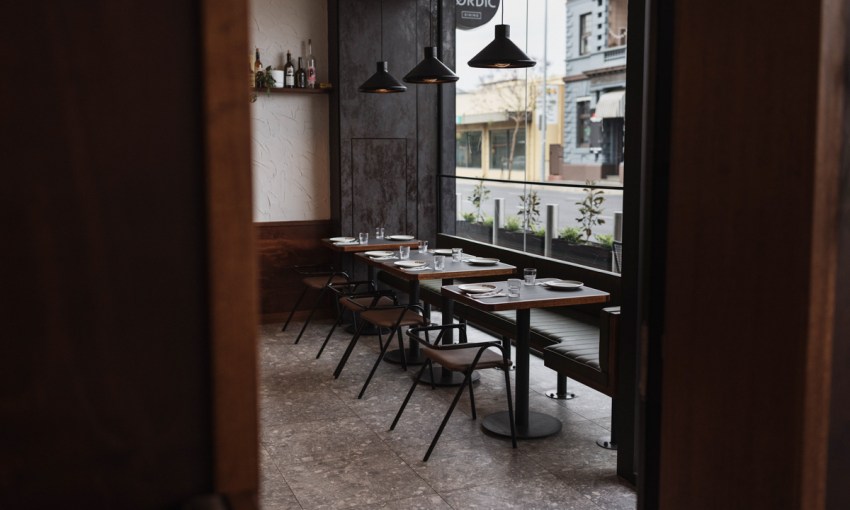 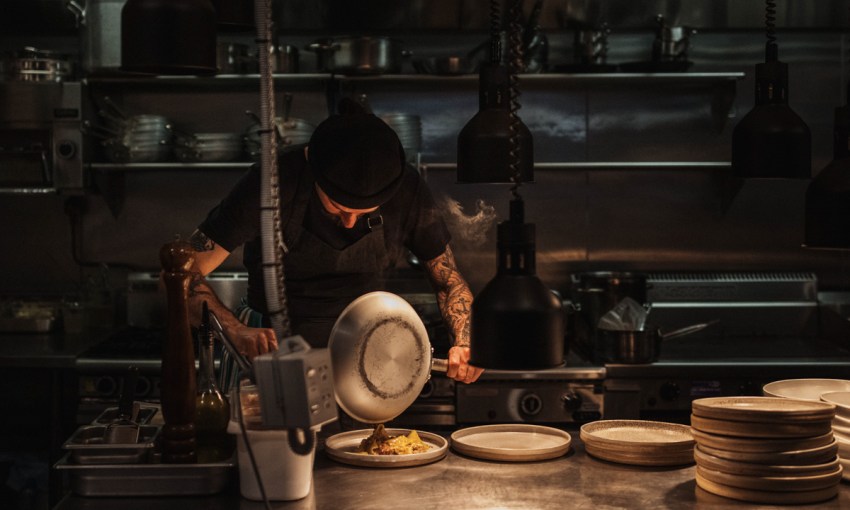 Since being allowed to trade with diners seated inside the restaurant post-pandemic, prospect pizzeria Anchovy Bandit has had no trouble filling its 24-person capacity.

New coronavirus restriction in South Australia may affect Anchovy Bandit’s capacity and operating hours. Check with the restaurant ahead of visitng.

“We’ve been booked out since COVID,” co-owner Alex Bennett says.

The restaurant next door, New Nordic, fell victim to the pandemic, and with the space vacated, the team saw an opportunity to expand the footprint of Anchovy Bandit, and reconsider its food offering.

Working with design firm studio -gram, Anchovy Bandit has taken over the entire New Nordic tenancy, with half of the space put to use to expand the current restaurant, which launched on Friday, 6 November. The other half will launch as café and “futurism art-deco” delicatessen Bottega Bandito in early December.

With the extra floor space, Anchovy Bandit has raised its indoor seating capacity by 40 people. 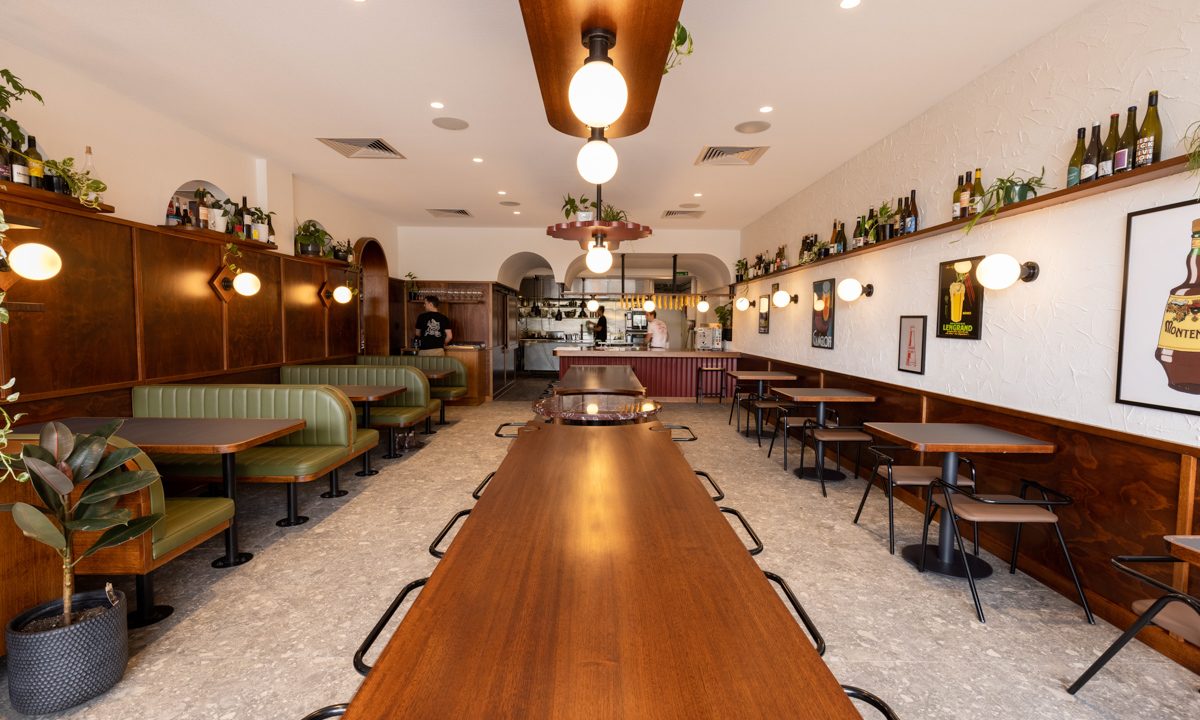 A new chef has been brought on to help relaunch the new Anchovy Bandit and Bottega Bandito project – Shane Wilson, whose culinary credits include of Bistro Dom, The Henry Austin and Hentley Farm.

Shane and another Anchovy Bandit co-founder, Oliver Brown, have been friends for a few years and often spoke about collaborating on a project together, with the Anchovy revamp serving as an interesting challenge for Shane.

“I’ve never really done Italian as a focus so I saw it as a bit of a new challenge, to do something different,” Shane says.

“I wouldn’t brand it as Italian food. We’re using inspiration from Italian food, but putting my own little twist on it, I guess. So yeah, just sticking with little hints of native stuff is something that I always work with, and just using Italian as the inspiration for everything.”

“Tartare is one of my favourite dishes, so this one is a little bit vitello tonnato-inspired. So you’ve got the veal tartare, bonito mayo, so just the play on that idea,” he says.

“And then I guess the pipi dish is a take on XO pipis, a Chinese dish, but done with spaghetti, tomato XO, and using those Italian flavours.” 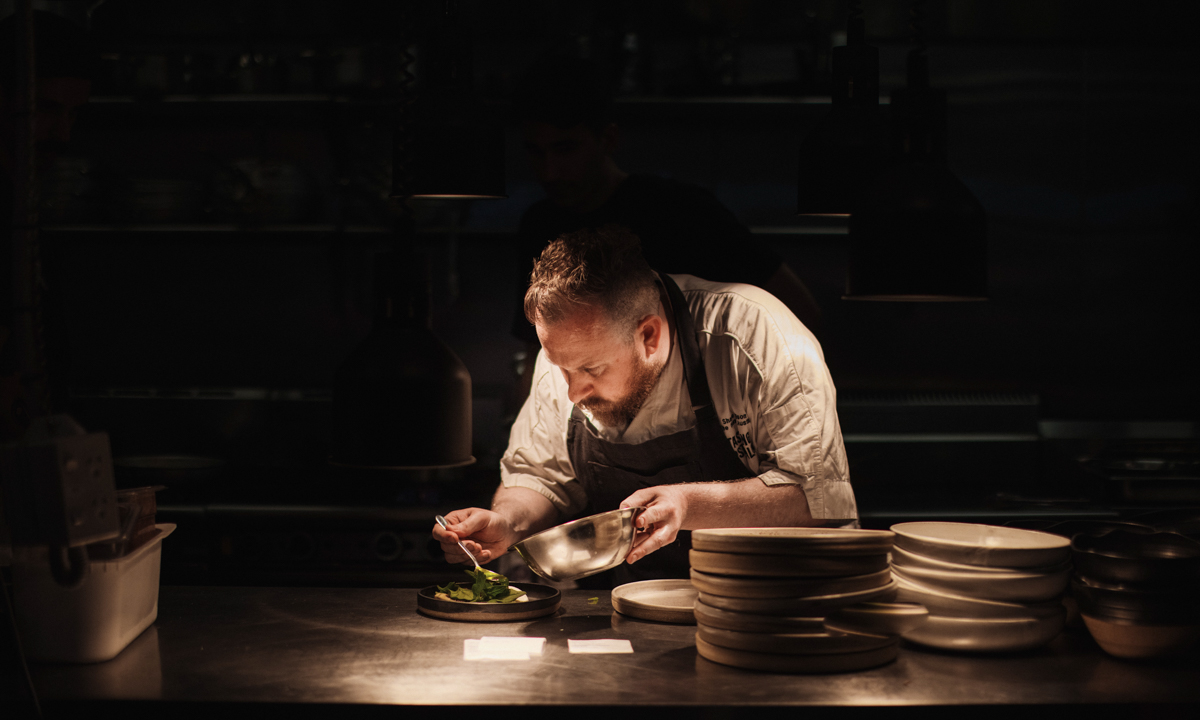 There are four pasta dishes on the first edition of the new menu, a strong contingency of pizzas, and a series of smaller plates.

Shane has been working at Anchovy for the last three months, developing the menu with feedback from the restaurant’s regulars. He’s excited to be part of a more rambunctious workplace, compared to the higher end restaurants on his résumé, allowing him to be playful with his menu design.

“This is a super fun restaurant. Going from somewhere like Hentley Farm, which was super serious, where [here we] still have that little bit of seriousness in what we do, but it’s just a fun environment,” Shane says.

“And the kitchen being so open in there, it’s so cool. We’re in the dining room with everybody, people wander in and say thank you.

“I like that barrier being down, and they can watch us do what we do, and the pasta bar is there for us to serve people and have a bit of banter. It’s going to be fun.” 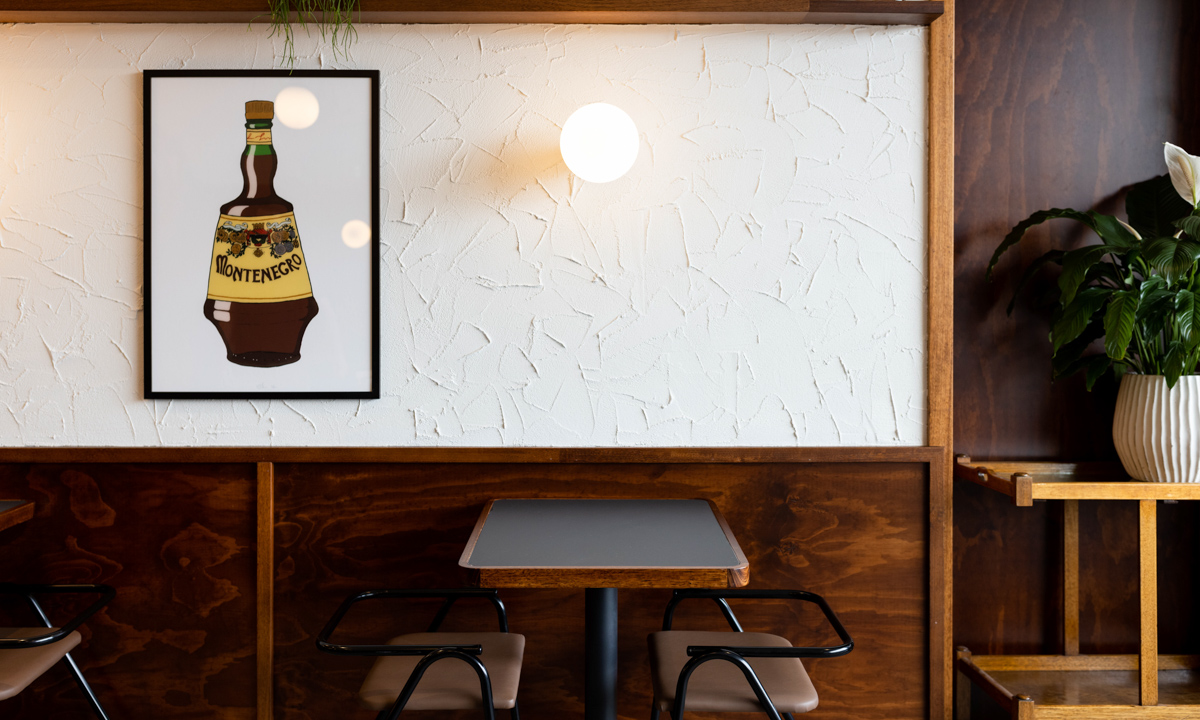 The expanded restaurant has been a hit so far, with a couple of local diners returning for a seat at the pasta bar multiple times since the soft launch last Wednesday night.

The new space is, understandably, a world away from its previous life as New Nordic – cutting a restaurant in half will do that.

The original Anchovy restaurant was designed by Sans-Arc, and Alex says the brief given to studio -gram for the expansion was to “be respectful of [Sans-Arc’s] designs, draw influence, and try to tie the two spaces together.”

Booths line the wall separating the two rooms, mirroring the previous space, but there is a 20-person timber table, separated briefly by a circular marble table top in the middle, to allow for larger bookings.

“We’ve always sent away anyone above groups of 10. We can’t do it next door. So now we have the opportunity to do those bigger groups, which we’ve always said no to,” Alex says.

There is a broad view into the kitchen at the back of the space, with seats available at the pasta bar.

“We really love how Anchovy has the theatrical dining experience, where you see the action side of it… so we wanted to bring that here,” Alex says.

Anchovy Bandit is maintaining its seven-day operating schedule, running from 4pm ‘til 11pm Sunday through Thursday, and 4pm ‘til midnight on Friday and Saturday nights.

Subscribe to CityMag for updates on neighbouring café Bottega Bandito, scheduled to launch in early December.