Owner and founder of Paddy’s Lantern, Sam Carey, welcomes CityMag into his café at 10am on a Friday morning.

At any other point in its nine-year lifespan, this time of morning on a Friday would see the space filled with the smell of coffee and the chatter of city dwellers lining up for their daily dose.

But this morning – and every morning since mid-March – the space is quiet, chairs are stacked on tables, and the Synesso coffee machine is cold. Even the lights are off – the space filled with the pale blue glow of morning.

On Tuesday, June 30, Sam posted a message on Instagram announcing that Paddy’s Lantern was closed for good.

Despite the shop being emptied of food and drink, in his nature as a hospitality lifer, Sam offers CityMag a bottle of water as he pulls down a couple of chairs.

“It’s been a strange bloody year,” Sam laughs, when we ask how he’s feeling.

The global pandemic has brought much gloom across our city and state, but contrary to our expectations, Paddy’s Lantern’s closure is not a coronavirus story.

The reason Sam has chosen to sell his business (or at least plant and equipment – he retains ownership of the brand), stems from his reason for founding it in the first place.

Sam started young in hospitality, as a dishwasher at age 12, and worked his way up in the industry to become a chef. The work took a physical toll, and in the mid-2000s “my back just blew out on me,” Sam says.

“It was multiple procedures and two operations later, and it’s still not great, and so I’ve sort of got that permanent impairment,” he says.

He spent five years on what was then known as Workcover, recovering from “a couple of back surgeries and a couple of spinal fusions,” as well some nerve damage from the surgery.

“I was learning to walk again, basically,” he says.

After that five-year period, Sam was ready to re-enter the workforce, but he found the combination of having a “dicky back” and spending so long on Workcover meant few employers were willing to take a chance on him.

At around this time, he started to interact with Adelaide’s nascent boutique coffee scene.

“I was hanging around Bar 9 religiously,” Sam says.

“Through Bar 9, I met Josh [Baker] at Coffee Branch and became mates with him. I helped out there a little bit.

“Coffee’s slightly different to every other food production thing, and so I hung around, watched people make it. And then I contacted Dave Moen, he’s now got Form Physio. He used to do coffee training, so about 10 years ago I spent hours with him just soaking in as much coffee knowledge as I could.

“Because even though I’d made coffee since the ‘90s, ‘90s coffee is slightly different,” Sam laughs.

The Adelaide coffee scene welcomed Sam at a time when he was being turned away from job after job in other corners of the industry. It became logical, for reasons of his own employment and to cut down his weekly spend in other people’s cafés, to join the scene and open up his own shop.

“It was partly because, with my back being as crap as it was… just continuing applying for jobs and being knocked back, ended up becoming way too daunting,” Sam says.

“Standing, for me and my back, is better than sitting, so I thought standing making coffee, I can move around a little bit and it’ll be great – and it was, and it has been, it’s just been hard work,” he laughs.

Drawing inspiration from his friends and contemporaries – Bar 9, Coffee Branch, and Taylorblend – Sam set up a coffee shop on what was then an underdeveloped section of Gilbert Street in the city’s western fringe, opening Paddy’s Lantern in October 2011.

Coffee, cake and a couple of toastie options alone proved a difficult business model, so Sam slightly expanded the menu. The Paddy’s philosophy, though, was simply to do coffee well.

Paddy’s found a following in its local clientele and in Adelaide café-hoppers searching for quality in a market still experiencing a hangover from those frothy, ‘90s-era cappuccinos. (Side note – if that’s your bag, Lucia’s has still got what you’re looking for.)

As the café picked up momentum, Sam still contended with chronic pain.

From Paddy’s inception, Sam was managing his back pain through prescriptions of codeine and oxycontin, “all of those derivatives of opiates and stuff,” which he is finally coming off now.

“One of the reasons of wanting to come off of pharmaceutical pain relief is that it’s so restrictive, and you’re made to feel like a criminal,” Sam says.

“You go to the doctor every month, and I’m only on patches for the last step, and then that’s the next step and then I’m off of everything. But yeah, you’re made to feel like a criminal – even though it’s been since 2006.”

And the dangers of the medication became sharply clear to Sam five years ago, when, through an error of paperwork, he was forced off his prescription, leaving him to deal with both unmanaged pain and withdrawal from the medication.

“It’s incredible the things it does to you,” he says.

“I’d been on forms of pain medication since 2006… and I actually had to go cold turkey, and in that time, just lack of sleep and everything, experienced psychosis.

“It was probably more terrifying for everyone else watching me, because it was so out of character for me, whereas for me it was beyond my care. It really was bizarre.”

At the beginning of 2020, Sam came back to work after a couple of weeks off over the summer break. He felt deflated. He’d seen friends affected by the bushfires and hadn’t been able to shake the emotional toll of watching the state burn.

In February, he started negotiating with someone interested in buying the business, all the while watching the spectre of the coronavirus dawn across the world.

A month later, COVID became a fixture of local news bulletins and a major force of change in the hospitality industry. As people’s daily habits changed and governments around the country started instituting shutdowns, Sam saw trouble coming.

On Tuesday, March 17, less than a week before the broadest coronavirus shutdown was implemented by the federal government, Sam received notification that his father had passed away.

“The day the funeral was booked was the day after the lockdown, so… we were [restricted to] five [attendees]. It’s not a funeral, you know? There was no ceremony.”

Sam posted on Paddy’s social media on May 31 to thank those who had offered condolences and to notify his regulars that the store would remain closed likely until the end of June.

“I’d decided to stop trade for a little while, with full intentions to start back up and try and sell it,” he says.

“I got to the June long weekend and I tripped over and injured my wrist. It was then I went: ‘Fuck.’

“I couldn’t move it for about three weeks. I contacted someone that was interested, about 18 months ago, in the business and just said, ‘Do you want to buy plant and equipment?’”

The presence of pain has been persistent in Sam’s life, and running a small business at the same time has often meant pushing through physical and mental barriers.

“Living with chronic pain, it’s a head game a lot of the time, and I just knew I didn’t have the psychological tricks in the bag to convince myself to do it,” Sam says.

“There’s many times I’ve hit what I’ve felt was my physical rock bottom, and after a bit of an emotional spurt you have an epiphany and go, ‘Nah, I’m not giving up.’

“It’s amazing what you can find in the depths of your dark self, you know? Sometimes it’s not until you get into your dark self and you’ve got nothing that you actually find what you need to go further. And over the nine years, there was a number of times where that’s happened.

“But I just feel like I’ve run out of inches,” he laughs. “Do you know what I mean?

“Everything’s here. The whole corner of this city is the best it’s ever been, and it’s ready. This part of the city is really good. It’s got the mix of residential, you’ve got awesome businesses around, so everything’s good – it’s just I’ve personally run out of inches.”

Sam is leaving this space on Gilbert Street in high spirits, knowing that he’s closing Paddy’s Lantern, admittedly, at a troubling moment for the industry, but on a high note for the business.

“It’s just strange to be closing not because it’s failed – it’s actually probably sitting on its most potential ever, but I’m just physically done,” Sam says.

“Reopening, I realised, it’s starting a business anew. Just that level of passion and that fire in your belly, it’s as much effort.

“I’m too [much] looking forward to doing playgroup and swimming lessons [with my daughter].”

The space will reopen in the near future as café, under the stewardship of new owner Ibrahim Yu.

Seeing the space evolve while keeping some of its Paddy’s DNA is important to Sam.

“It would have really broken my spirits if I walked away without filling the space with something. And knowing that people want good coffee, I’ve been bugged something chronic,’ he says.

“It’s exciting to take a look at what I’ve done with essentially a bar, a few tables and a polished floor, for someone to come in and go, ‘Oh yeah, but you could…’ So I’m fascinated to see what he does with it.” 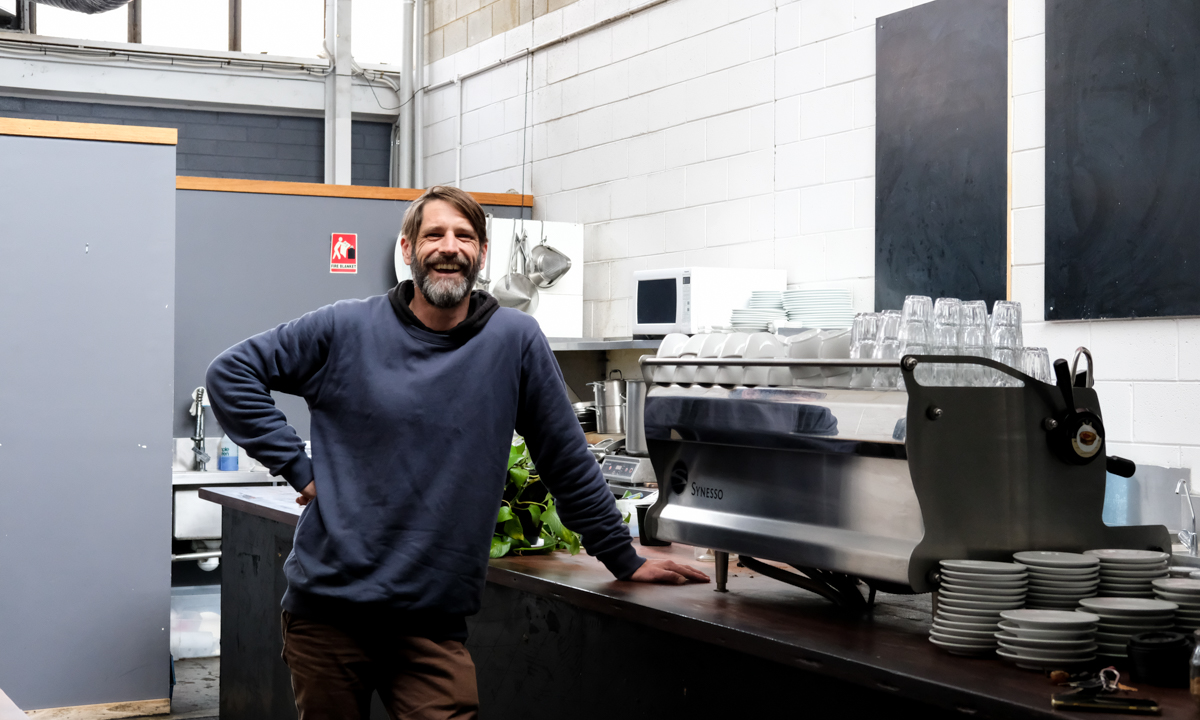 Sam and the Synesso. Spot the Billie Justice Thomson sticker

We ask Sam how he hopes Paddy’s will be remembered.

“I don’t know if it’s for me to actually define,” he says.

“As long as I’m remembered as someone that’s paid my bills. Because too many other people out there use other small businesses as cashflow and little banks.

“That’s something this whole coronavirus thing has brought to the surface. And it’s brought everyone to a point where, you can’t do it.

“The fruit and veg supplier shouldn’t be your cashflow. You should be paying on the terms that you agree on. And that’s something that I think is going to change in the industry is that people can’t afford to offer those niceties with any doubt. Because people have been affected so much.”

Sam wasn’t expecting to come out of the sale with ownership of the Paddy’s Lantern brand, but he’s excited to think that he could, sometime in the future, bring it back in another form. But this is a line of thought he is reserving for another day.

“I really don’t know what the future’s going to hold, but it’s not really stressing me out at the moment,” he says.

“It’s one of those things. I’m hoping that my reputation would allow me to get a job, with a shave and a haircut, obviously,” he laughs.

“This was always a stepping stone for people, because it is just a coffee shop. So it’s been awesome. My first business. And it’s strange to be closing up, not because it failed, closing up because it could be a success. That’s the reality of it.”