MiMi relaunches with a traditional take on Korean cuisine

MiMi launched as a Thai-Korean eatery on Sturt Street in 2018, but the restaurant has emerged from the COVID shutdown with a simplified, traditional Korean concept, guided by head chef and co-owner Nokie Hongsakaola and sous chef Donghwa Park.

After an eight-week shutdown, Plus 82 group co-founder Steven Lee says most of his restaurants are now back to “almost normal”, but one has emerged with a reimagined identity.

CityMag first met the Plus 82 group when our ‘Most under-rated…’ series stopped by Pocha, located beneath the Black Stump, between Pirie and Grenfell streets.

At the time, the group was also operating Plus 82 Lite on Gawler Place and was in the process of opening two new concepts: Gogi and MiMi.

The latter launched towards the end of 2018 as a Thai-Korean fusion restaurant, under the guidance of head chef and co-owner Naphachama Hongsakaola (known amongst her team as Nokie), a former chef at Pocha.

In its first year of trading on Sturt Street, Steven and Nokie saw the MiMi concept wasn’t catching on as they’d hoped. Some tweaks to the menu were implemented, but it was decided that an overhaul of the concept was required.

“People got confused whether it was Thai or Korean,” Steven says.

“We thought it could be an interesting venue, having both cuisines, and you can also experience the authentic taste of both Thai and Korean.

“But obviously it didn’t work – and I have to be honest – so we decided to change.”

It then became a matter of waiting for the right time to flip the restaurant’s concept. This opportunity, helpfully or not, was delivered to them in March.

“After COVID we really thought about it and made a decision, you know, that it’s probably easier for us to change now than later, because we’re going to close for eight weeks anyway,” Steven says.

“For me and Steven, we were discussing how we’re going to bring this back to life, and with the Plus 82 group… they [have a very strong] focus on Korean cuisine in different types,” Nokie says.

“We changed the concept totally to the Korean style, and then we aimed for the authentic flavour.” 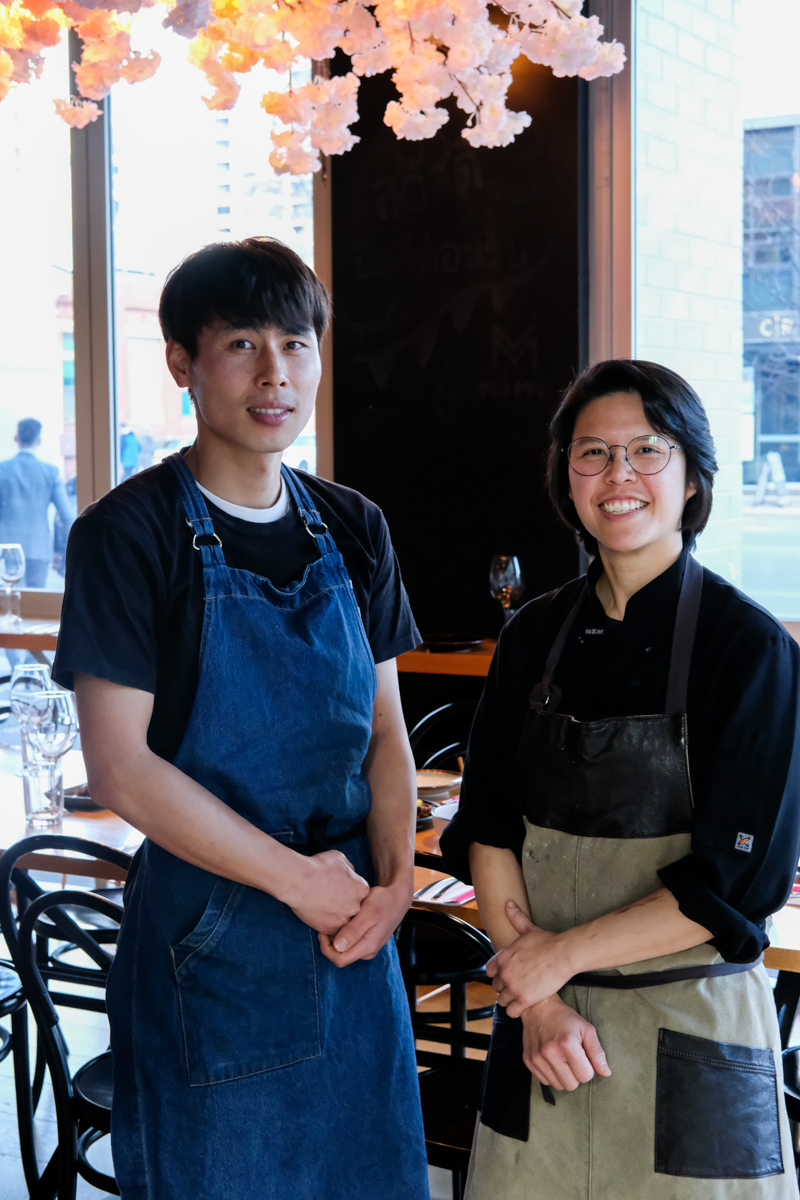 Nokie brought over Pocha’s sous chef, Donghwa Park, to help create the new MiMi menu, drawing on his passion for traditional flavours, marrying them with her modern techniques.

Where Pocha focusses on Korean street food, and Gogi on Korean barbecue – both reasonably well-established concepts in Adelaide – Steven and Nokie hope the new MiMi menu will expand Adelaide’s understanding of Korean cuisine.

“We’ve seen a huge market in Adelaide for Korean cuisine, but we want to do something different,” Steven says.

“Some of the dishes that we serve here, we used to serve to the king back in the 1800s. It’s really different style of dish, I guess, compared to other restaurants, including Pocha.”

Steven points to the tteokgalbi, honey soy glazed pork and beef patties, and gungjung tteokbokki, a soy stir-fried beef dish with rice cakes, as examples of this new direction.

For chef Donghwa, the kimchi jijimi is a particularly special dish. It’s a rendition of a kimchi pancake, but where Pocha’s version is a South Korea take, the MiMi flourless kimchi pancake is a North Korean recipe, passed down from his grandmother.

“This kimchi jijimi came from actually North Korea. My grandma used to make kimchi jijimi when I was young in Korea,” Donghwa says.

“I want to bring something new and authentic in Adelaide. I don’t want to do the same thing, like Korean style. So it’s not fusion, it’s not modern, I want to mix it together and serve to lots of customer.” 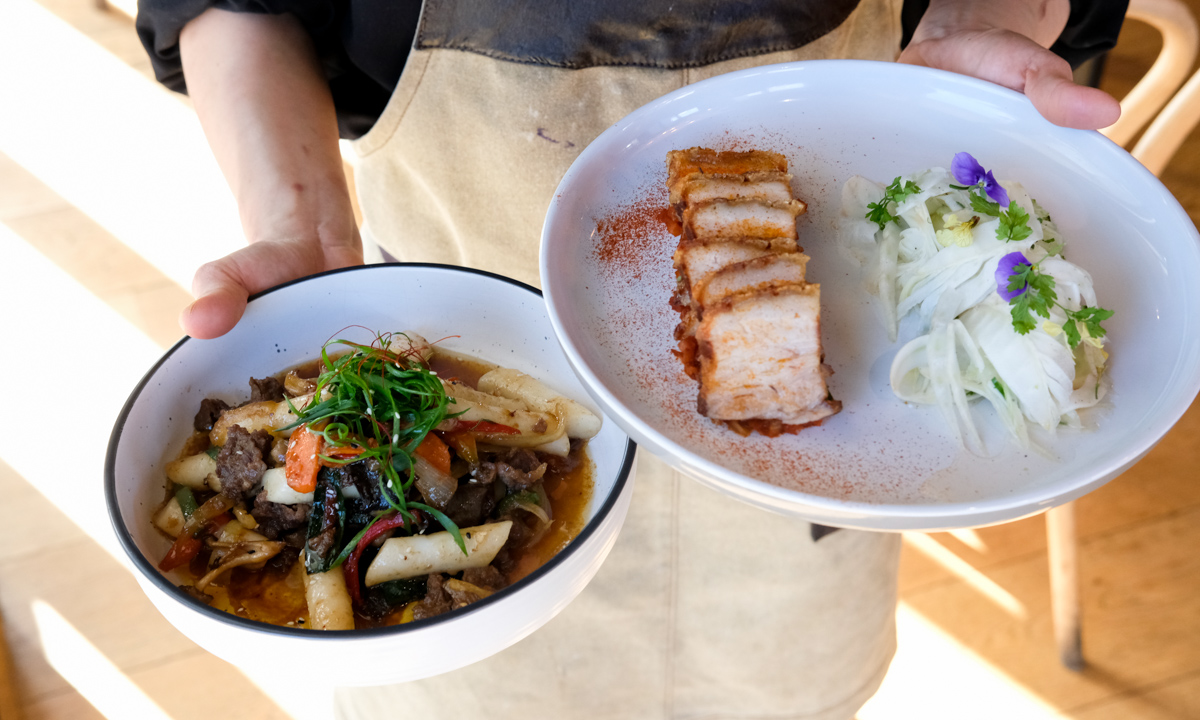 The bar concept has a soju focus, with a soju tasting board available for the uninitiated, and a range of cocktails, including a Soju Negroni, for those already hooked.

A hallmark of all Plus 82 ventures has been a sense of rambunctiousness in the fit out and style of service (offers of soju shots from staff is not uncommon), and part of MiMi’s reinvention was to bring more of this feeling into the space.

“We have more younger people coming in, taking photos of the menu, dishes, he says.

“We added some flowers as well, the new neon sign. That really picked up the new clientele. And we’ve seen the results straight away.

“When they looked at the menu and we explained the new concept, people are actually interested, you know? And they want to come back and try different dishes.” 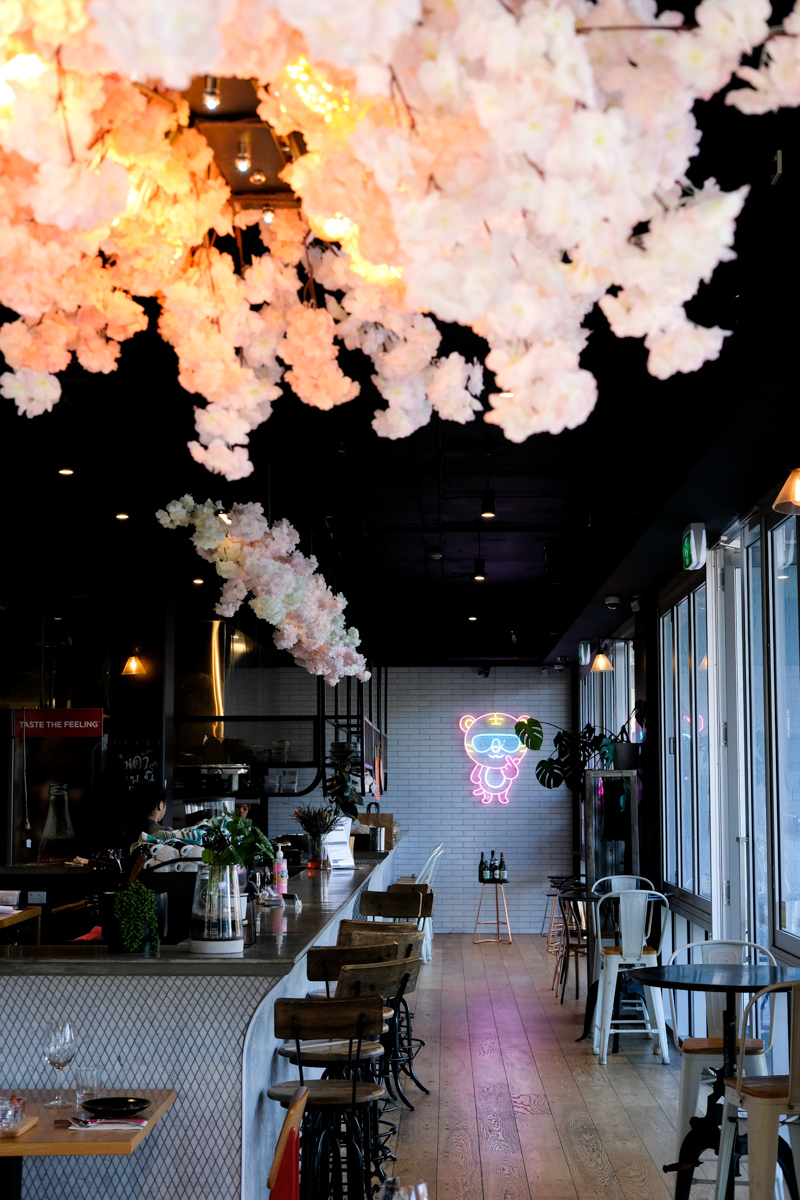