Jump down the rabbit hole with Little Bang

Little Bang Brewing has released the second edition of its experimental barrel-aged Rabbit Hole series - a weighty Belgian sour cherry blend that "demands a wine glass and a half hour." 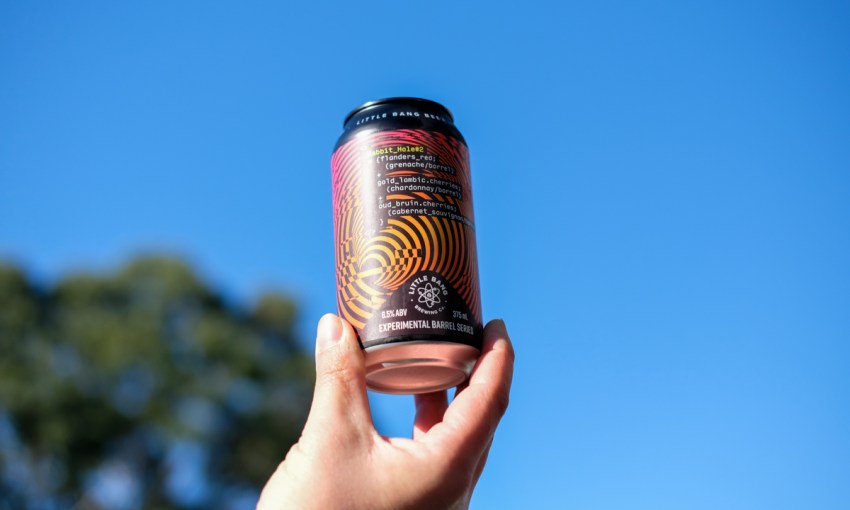 Before we leap into the what and how of Little Bang’s recently released experimental barrel-aged beer Rabbit Hole #2, a note: This is the most expensive beer the brewery has ever produced, and it was certainly not intended for release at such an unfortunate time in Australia’s economic history.

“What timing. We’ve been working on this one for 18 months,” Little Bang co-founder Ryan Davidson tells CityMag.

“Honestly, the brew team said, ‘Look, shit timing hey, this thing is on point now, we need to package it now.’

“So you’re saying we should produce our most expensive beer ever this week?” Ryan continues, wincing at his own recollection. “Cool. Let’s see what happens.”

Rabbit Hole #2 is the second edition in Little Bang Brewing’s experimental barrel-aged beer series, and was met with an initial burst of interest on its release, which calmed Ryan’s nerves ever so slightly by the time of our interview.

The series is based on a long-held homebrewing tradition of keeping brews aside that are either temperamental or have not come out to specification and storing them. With some time spent alone, the thinking goes, something interesting is bound to happen.

Little Bang’s name for the series, ‘Rabbit Hole’, comes from the infinite possibilities a barrelling program presents to brewers – particularly those who place great value on creativity.

Rabbit Hole #1, which was released November last year, took a Little Bang saison and aged it inside a Prohibition gin barrel, which, before being filled with gin, was a shiraz barrel.

“We thought, Alright, we’ve got a shiraz barrel that’s had gin, and then we put a saison in the gin barrel, but then we’re going to give that barrel back to Prohibition, they’ll put something else in that saison barrel. Can we then get it back off them and put something else in it?” Ryan recalls.

“We imagined all the different directions we could go, we looked at all the barrels we had, the stuff that we had, and that’s where the name came from – you start going down the rabbit hole.”

This second edition is remarkably different from the first; Rabbit Hole #2 is a blend of three Belgian-style sour beers, each aged in three different barrels, then blended together.

The result is a beer that is deep red in colour, is incredibly bright and fruit-forward and has and upfront but not overblown tart tanginess. It sits at 6.5% ABV but does not hit heavy on the palate.

Many of Little Bang’s sour releases – and there have been many – bring on visceral nostalgia of sipping soft drinks in high school courtyards during the days of our youth – like a grown-up Solo or Fanta.

Rabbit Hole #2 sits closer to the experience of finding something new amid the natural wine movement, but without the risk of encountering some unwieldy funk.

“This is off the chain,” Ryan says.

“I’m hesitant to even say it, but I do enjoy this as much as I do those titans of brewing history who are the inspiration and that peak that we all aspire to.

“It’s rich and it’s meaty. There’s a rich, plummy fruitiness to it, but it’s also got this savoury element and almost a bloodiness to it. The depth – you can’t crush a tinnie of this. It demands a wine glass and a half hour.”

Rabbit Hole #2 is available now via Little Bang’s online store, as well as pick-up at the brewery.