For the new location, the team at Jack Greens took sourcing locally to a new level with local furniture and designers to match their local food and coffee.

There weren’t many things the Jack Greens team wanted to change when considering how to go about opening their second location on James Place.

The second Jack Greens location can be found at 1/32 James Place, Adelaide. It is open from the public today (Dec 7) and opening hours are Monday-Friday, 7.30am-4.30pm.

The healthy fast food outlet’s first store on Waymouth Street has been consistently popular since it opened more than a year and a half ago. The James Place store will be serving the same menu of salads, grains, wraps, breakfast options and specials like curry and soup, but there was one thing co-owner Wade Galea thought needed to be done differently.

“I guess we’re trying to do the right thing by getting locally supplied food in, using biodegradable packaging, and supporting local charities, so why can’t those thought processes match with the design of the store?,” he says.

While the Waymouth Street interior was self-designed, Wade decided to bring in a team of locals to help with the James Place store. Ben Ramsey and Daniel Chiali spearheaded the interior fit out, which aims to express the same aesthetic values as seen in the first location, but with appropriate adaptation to the new space.

“The brand – we want it to be clean, but we also want it to be vibrant and have people come in and feed off the design and the energy of the staff and the music we’re playing,” says Wade.

“We always want to use some of the bones of the building too. In Waymouth Street we cut into the wall where the menu sits to reveal some of the rubble and concrete back there, and here we’ve done the same thing with the ceiling.”

The industrial but bright feel achieved in the store by Ben and Daniel’s design is matched by stools from Adelaide’s Hunt Furniture. Furniture designer Max Hunt was brought on to make customised stools for the shopfront after Wade found his work via 1000 Chairs.

“We just thought his designs were cool and matched the aesthetic we were going for in James Place,” says Wade.

As well as a visual sympathy between the brands, there’s also a connection between Max’s sourcing methodology and that of Jack Greens.

‘The timbers are all Australian in these stools, so we keep everything local,” says Max. “And everything in that stool is made within about 5km of my workspace – whether I make it onsite or we outsource to pretty much within that 5km radius.”

Other local suppliers – including plant stylist Emma Sadie Thomson – have also contributed to the fit out. 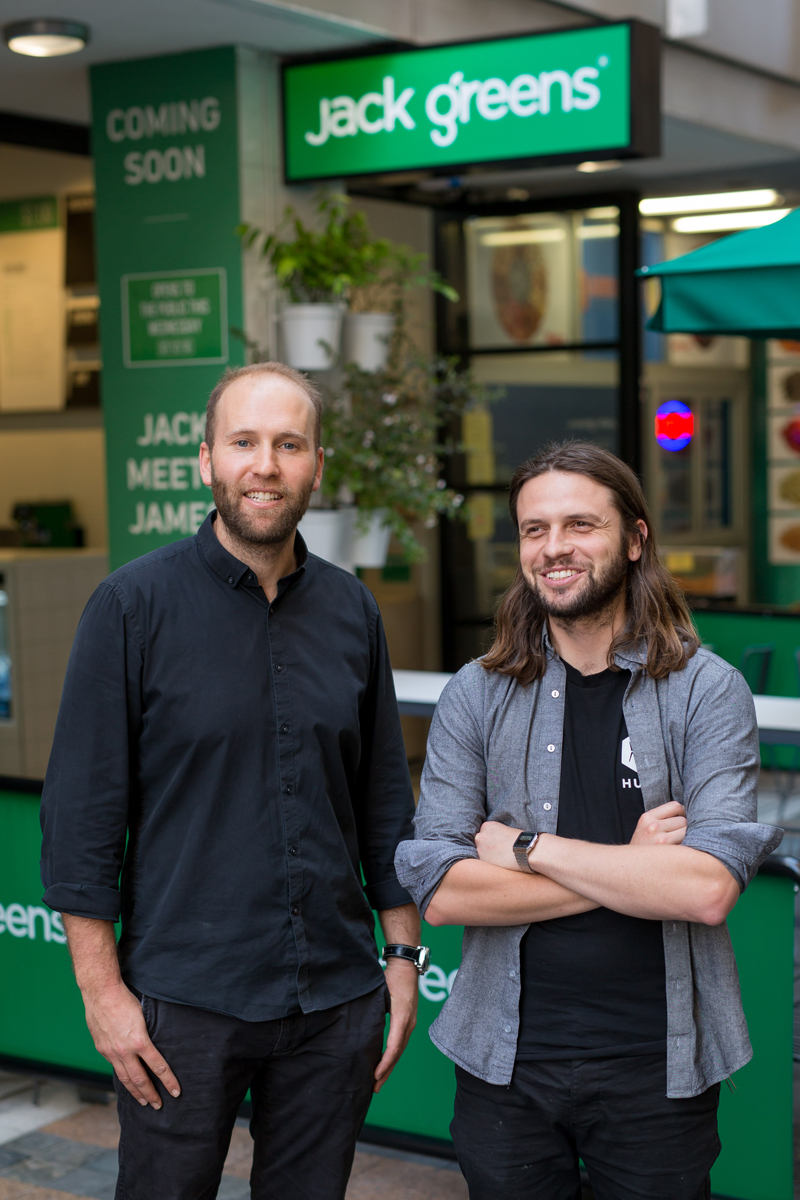