With just eight seats, a grill, and a chef, Shōbōsho's sister restaurant, Shō, is the perfect accompaniment to the Leigh Street venue. 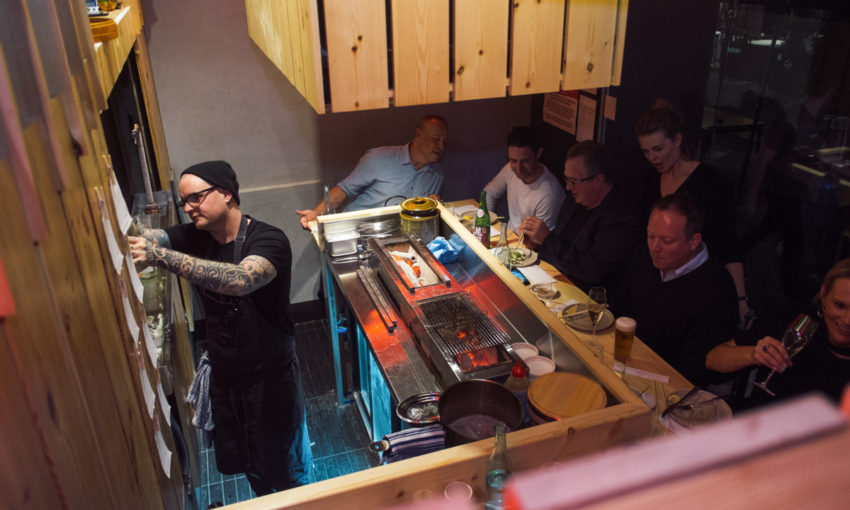 The ground level booths are out, and the eight-seat yakitori bar is in, as Shō – Shōbōsho’s restaurant-within-a-restaurant – takes up residence on Leigh Street.

Shō is located in the front of Shōbōsho, 17 Leight Street, and opens from midday until late Tuesday to Sunday.

Inspired by chef Adam Liston’s experiences in Japan, Shō will serve sticks hand-to-hand from the chef to the diners sat at the limited capacity bar.

“The biggest thing about it is that people can come and eat something that they can smell from the street,” Adam says, “and I think that the fact that the grill’s right there, the smoke’s coming off the grill, the interaction with the chef also pouring the sake, the highballs, the beer, that makes it a little bit more approachable.”

This more intimate approach is designed to better serve the final product, which Adam says was at risk of suffering under its own high demand.

“The problem with doing yakitori for 70 people was the product was suffering, versus what we could do downstairs for eight people, it meant that we could focus on quality, so that was the major drive with that,” he says.

Shō will cater both for the high-turnover lunch crowd, and those looking to spend an evening in close proximity to a grill (and a chef pouring whisky), which Adam hopes will facilitate a unique relationship between the two sides of the bar.

As well as yakitori, the bar will also serve kushiyaki, and diners can order three, five, or seven sticks at a time, accompanied with “snacks and something substantial.”

The yakitori is made from locally sourced whole chickens broken down each day, which Adam says is “a sustainable, ethical approach to serving yakitori [and] exactly what you see when you go to Japan.”