Having finished up at their Port Elliot pop-up, Gang Gang has moved to Torrensville, where they're serving burgers, nachos, tacos and loaded fries out the back of café and events space Canopy. 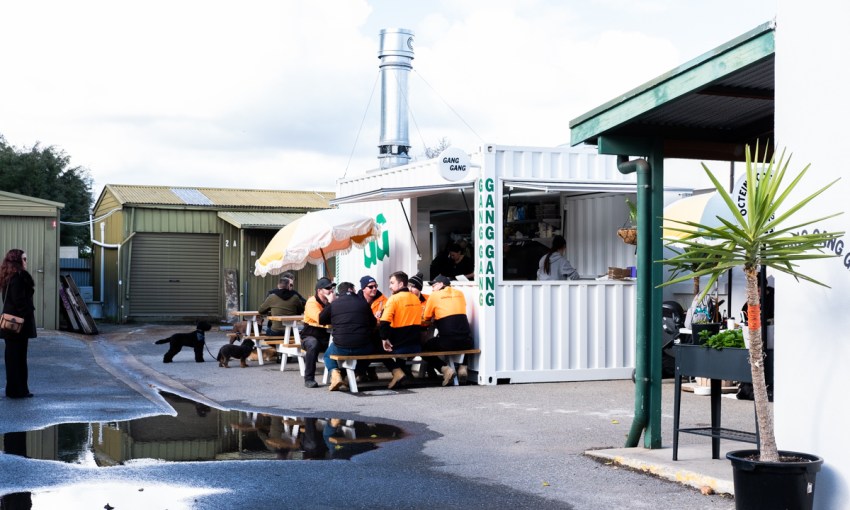 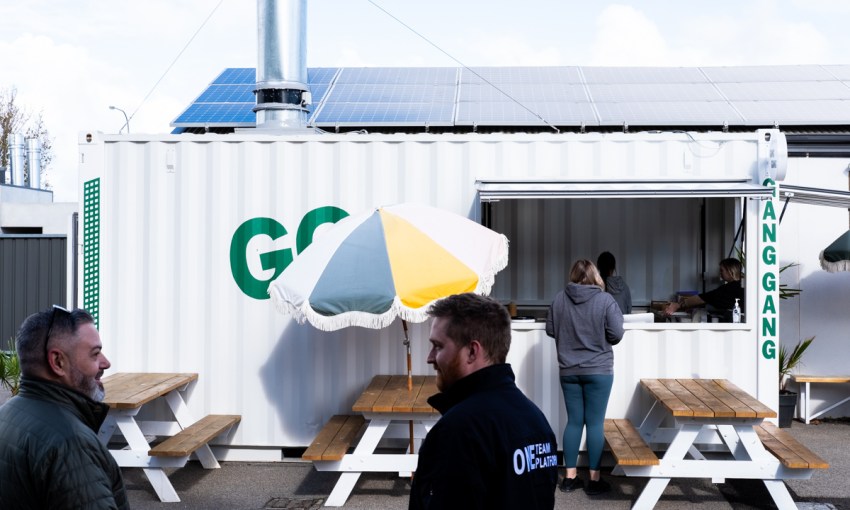 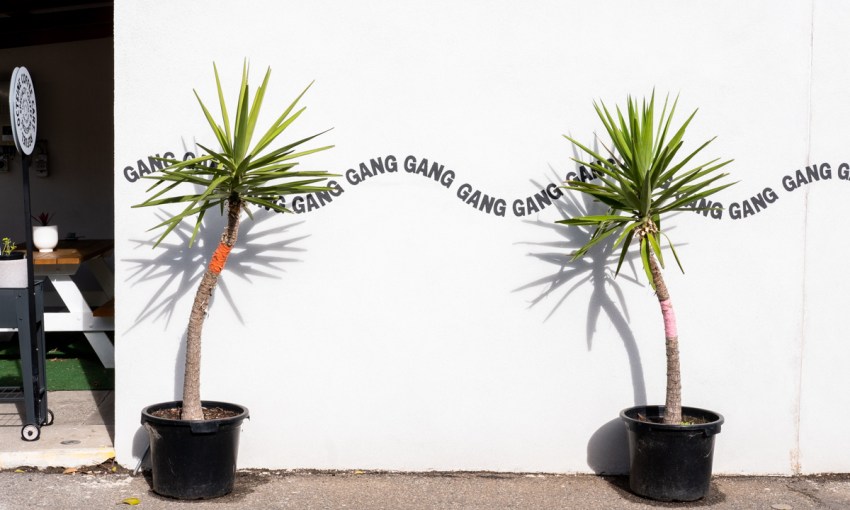 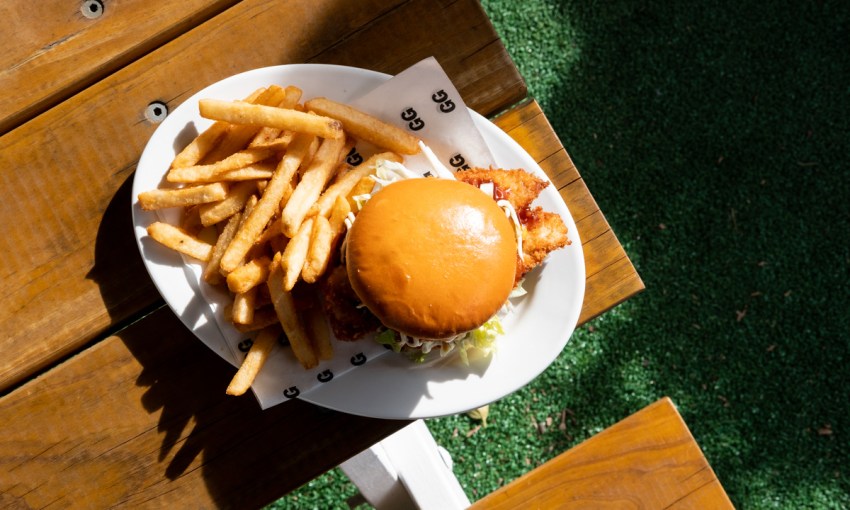 As the warmer months receded earlier this year, the team at Gang Gang wondered what to do next.

Gang Gang Torrensville
Out the back of Canopy by Octeine
2 Jervois Street, Torrensville 5031
Wed—Sun: 8am ’til 2pm

They’d enjoyed the time they’d spent at Port Elliot alongside Yeo Haus’ coffee hole, but trade in a seaside town is understandably seasonal.

Founders Morgen Wynn and Nina Hadinata were in the process of taking their shipping container kitchen offsite, when an opportunity arose.

“The day that we actually had it on the crane, Pete [Mann, founder of Octeine Coffee] gave us a call,” Morgen says.

Morgen and Nina had previously tried to organise for the Gang Gang food truck to pop-up out the front of Octeine’s Kent Town shop, but the truck didn’t fit at the site.

At Octeine’s Torrensville shop, which is a café and events space known as Canopy, there was a back space which Pete had yet to activate that could perfectly accommodate the Gang Gang shipping container.

“It felt like it was meant to be,” Morgen says.

Gang Gang’s Torrensville outpost out the back of Canopy launched on Friday, 2 July, with the two businesses sharing the indoor and outdoor seating available.

All the drinks (coffees, juices, smoothies) come from within the café, whereas Gang Gang is sticking strictly to their food offering. 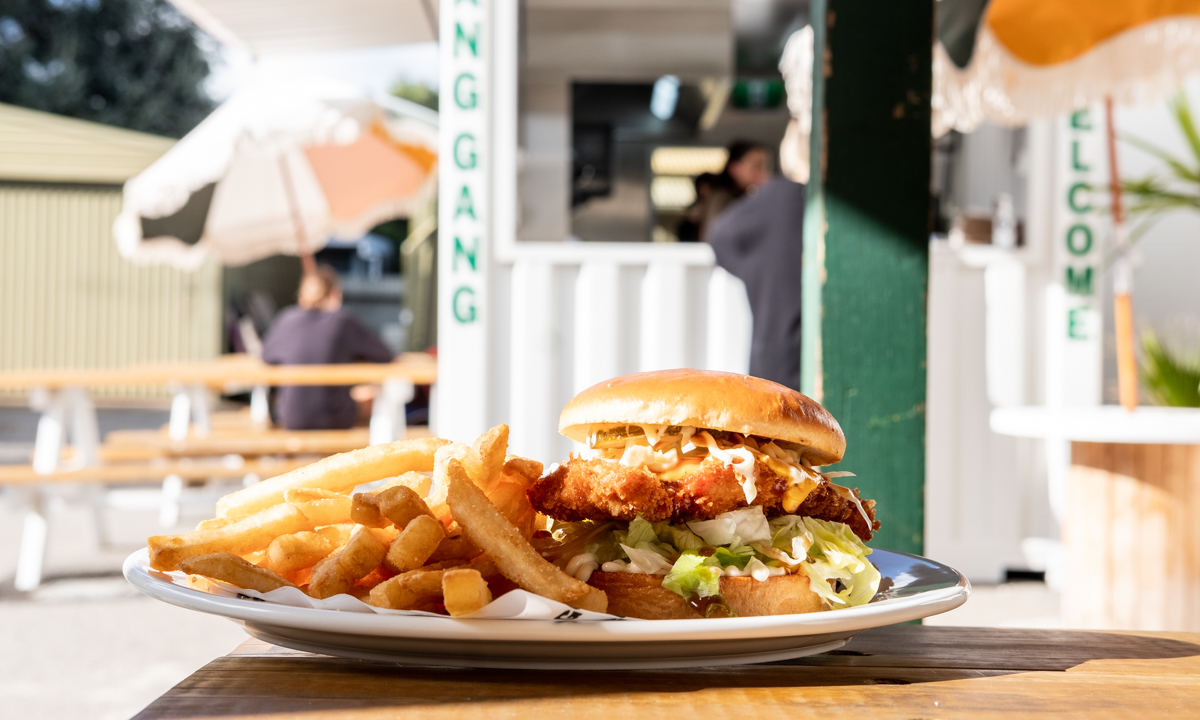 “We still have our burgers that we’re known for, but we are sneaking in a few different items, and there’ll be some seasonal stuff as well,” Morgen says.

“We’re also doing shared plates. So we’ll have some nachos, some loaded fries, tacos, bits and pieces like that that we don’t really offer anywhere else. It’ll be exclusive to here.”

The Torrensville outpost will also introduce plant-based dishes that won’t be available at either the Unley deli or from the Gang Gang food truck.

“It’ll be stuff that we find flows nicely with Pete and Canopy’s menu… We’re trying to create this space so it’s not chalk and cheese. We’re trying to make it so that way it complements and makes sense.”

There will also be a breakfast menu available from 8am, offering big-breakfast-style café favourites.

CityMag speaks with Morgen on opening day, and she says already the two businesses are working well together, both in offering and in back-of-house camaraderie.

“I guess it comes down to the same sort of clientele that we attract, so it’s kind of harmonious between the two parties,” she says.

“It feels like being at Parkside, if I’m honest. Same feeling, they feel like the same staff that we’ve got. Everything’s just easy. It’s nice. It feels good.” 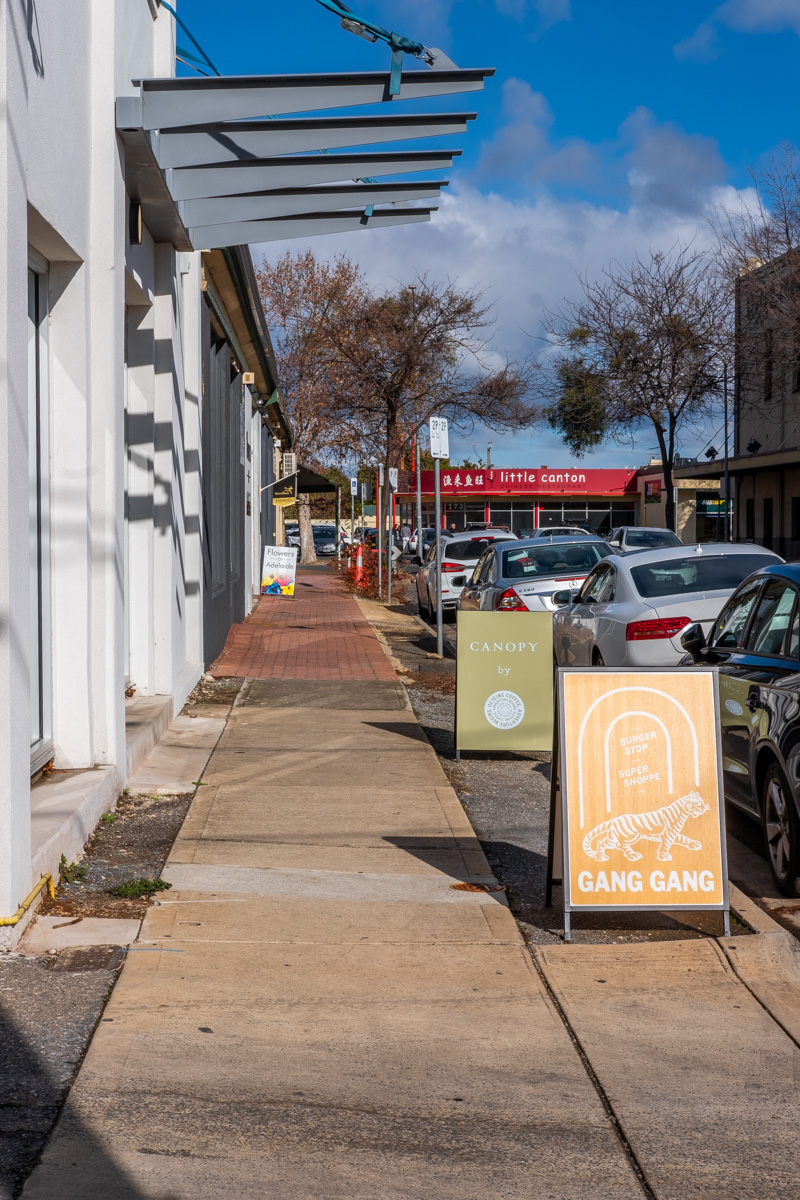 Having operated as a food truck for years, Morgen says Gang Gang’s long-term lease at Unley has helped mature the business.

“When you go from working at a festival where you’re slamming out product, hundreds and hundreds of burgers, to being able to have a little bit more one-on-one time with customers, we’ve learnt how much we appreciate our locals,” she says.

“You build relationships with people, and what were patrons you call them friends now almost.

“Those relationships are really important when it comes to having a brick and mortar, per se, than inserting yourself for a short time and then scooting off and you don’t know if you’ll ever see that person again.”

Morgen is excited for Gang Gang to become a part of Torrensville’s local community.

“Already we’ve had a few people introduce themselves: ‘Just so you know, I’m this person’, which has actually been really lovely for us,” she says.

“When you go to a new place, you never know what you’re going to get. But Pete’s been lovely, all their staff have been really helpful and supportive, so yeah, it’s good.”

With the settling-in process now underway, Morgen and Nina are already working on a follow-up bricks-and-mortar venture, this time in the Adelaide CBD.

The space will be a Gang Gang spin-off run collaboratively with other parties and will be a nighttime venue with a “full bar with an extensive cocktail list”.

CityMag has been promised more details in the weeks to come.

Gang Gang Torrensville is open Wednesday through Sunday and can be found out the back of Canopy on Jervois Street in Torrensville.