Fleurieu Distillery: From beer to barrels of whisky

The former Steam Exchange Brewery sits right on the wharf at Goolwa, just one and a half kilometres from the high tide line. It’s still run by Gareth Andrews and there’s still beer being brewed on the premises, but these days the sign out front says Fleurieu Distillery.

The first release of Fleurieu Distillery whisky is almost sold out, but can still be tasted at bars like Hains & Co – where we took these photos. A new release is slated for March.

Set up as a craft brewery back in 2004, Steam Exchange “did alright”, says Gareth. They won a number of awards and developed a loyal local following, but as the craft beer industry moved toward hoppier brews, he decided that he wanted to move in a different direction.

“That whole push towards craft beer that is virtually liquid weed wasn’t really our cup of tea,” he says. “We prefer to brew more of the English type of ales.”

Those beers will continue to be brewed in small quantities, but 90 per cent of the site’s output will now be whisky. It was an easy transition, because the starting point for the two intoxicating liquids is very similar. 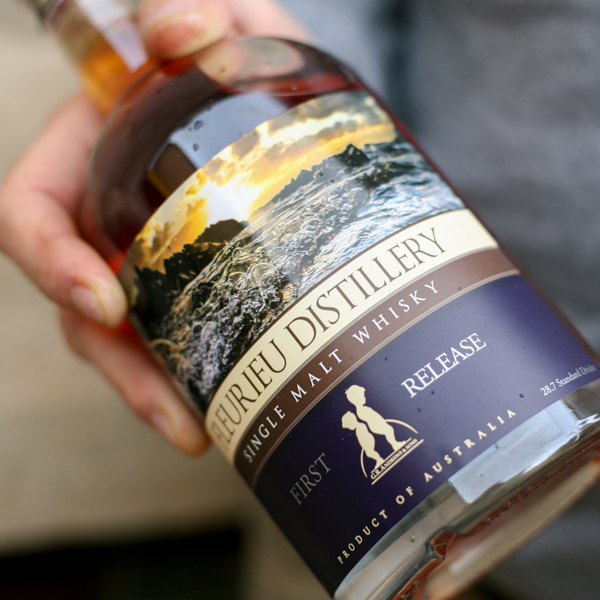 “If you’re looking at it from a production perspective, whisky is pretty much distilled beer without the hops,” says Gareth.

One of his favourite distilleries is Caol Ila on Islay and he’s tried to recreate the thick, oily malt spirit that they produce. To that end, his 12 hectolitre still is a scaled down clone of Caol Ila’s, custom made by Knapp Lewer in Tasmania.

The spirit then goes into ex-Seppeltsfield port casks to mature for at least three and a half years. This imparts flavours like blackcurrant, vanilla and maple syrup as well as a rich colour.

The first batch – a blend of the initial five 100-litre barrels laid down –has just been released, and the 600 bottles have almost sold out. It is already being stocked in several East Coast venues, and closer to home is available at specialty bars including Hains & Co and The Joiners Arms.

The next release is earmarked for March, and will be a similar style.

“Our aim is not to just put out individual barrels, but to do a lot more in terms of blending,” Gareth says. “You get a much better product, a better flavour profile and it’s much more indicative of your style.”

As Fleurieu Distillery looks to ramp up production considerably, they see that consistency as a vital asset. But one thing that you can always expect from this family-owned company is a distinctive product with a bold flavour.

“There are plenty of Scottish whiskies out there owned by the big companies and run by accountants and they’re thin and flattened, they’re watery. So this is a return to that historic style of big, juicy single malt whiskies.”