Through its sustainability-minded labels Unico Zelo Wines, Applewood Distillery and Harvest, Ochre Nation is being, and facilitating, the change it wants to see in the world.

“I actually used to work for quite a large winemaking company, and the way we would make wine was quite interesting,” Ochre Nation’s Brendan Carter explains.

You can experience the products of Brendan and Laura’s philosophy through the products they make under the Ochre Nation banner. Find them via Unico Zelo wines and Applewood Distillery.

“We were bringing shiraz from the Riverland after importing a megalitre of water per hectare in from Victoria, because we ran out of water.

“It would hit the winery with that Italian acid, and then we’d adjust for its pH using Chinese or Italian Tartaric acid.

“We’d have to add some sort of nutrients, which would come from the same lab that we had the inoculated yeast from, which was generally from Switzerland… or isolated from a vineyard in France.

“Once we get it through fermentation, hopefully without having to interfere too much more in it, we’d put it into French or American oak. We’d use bentonite along the way to fine it, which was from… America or the UK, put into a Chinese bottle, Chinese label, Malaysian box, and then put Wine of Australia written on the front. It just didn’t seem to make a lot of sense.”

Seeing this process in action solidified Brendan’s philosophies and those ideas now underpin all the ventures he runs with partner Laura Carter – Unico Zelo Wines, Applewood Distillery, the Harvest winery co-op, and the umbrella company encompassing them all, Ochre Nation. 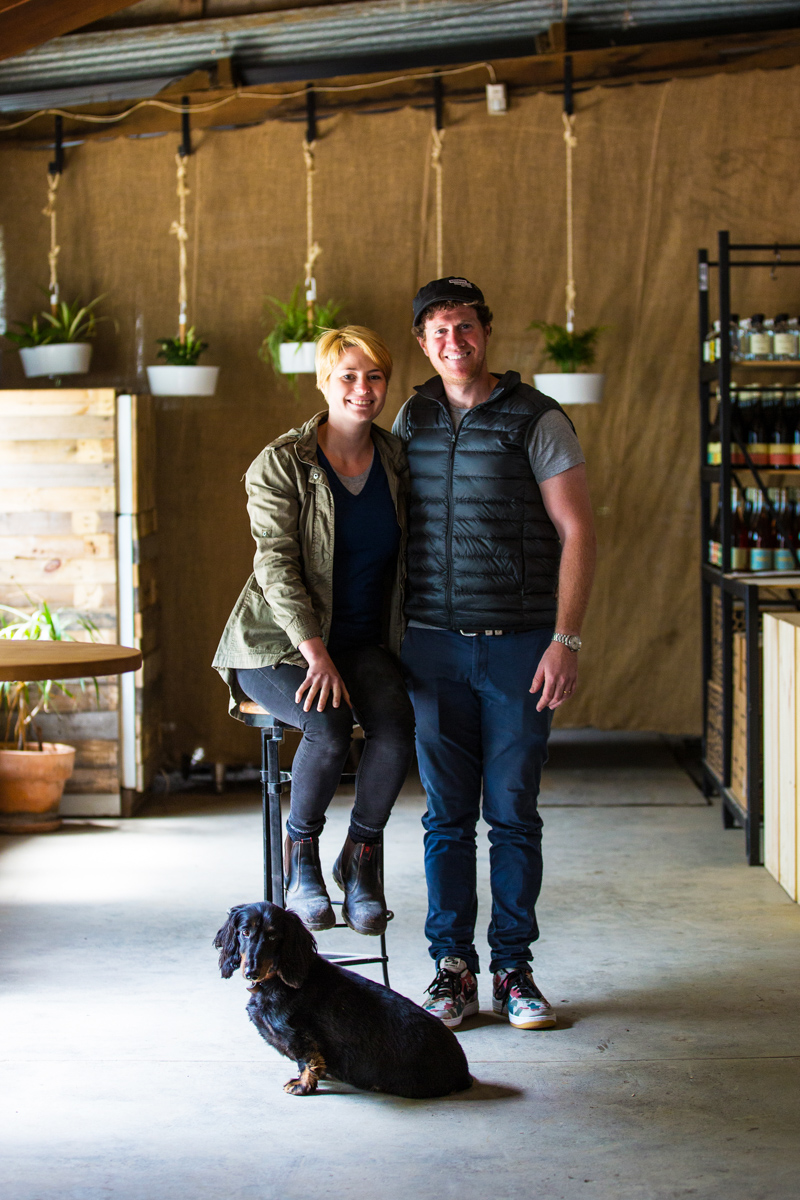 Rather than the effort and resources mentioned above being employed to wrangle fruit into submission, Brendan and Laura decided to intervene much earlier in the process.

“We believe inherently in the natural winemaking movement, and that’s why we started Unico Zelo, [because] no one seemed to be making wines from those varieties in what I would call a natural way, or minimal intervention way, and by showcasing this, it’s [a case of] lead-by-example, where we hoped people would follow suit, and certainly they are starting to do that now.”

But to have the broader effect on the industry they wanted to have, Brendan and Laura needed to do more than just lead by example.

With the Harvest project, they invited growers within a five-kilometre radius of Ochre Nation’s base in Gumeracha to drop off excess grapes of any variety, if they’d “been stiffed by another company, or haven’t had success in being able to sell them, or have diseased fruit.”

If the fruit is good enough, The Unico Zelo team will turn it into wine.

“Even if it’s a diseased year, we’ve just got to work harder. That just sucks for winemakers,” Brendan says.

The resulting wine is then sold under the Harvest label, with 50 per cent of the profits going to the grower, who would otherwise not have been able to sell the fruit, and the other 50 per cent going into a fund used to provide growers with interest-free loans that help them regraft vines into varieties more appropriate to the Adelaide Hills locale.

“This vineyard actually runs alongside some chardonnay that’s been there for six years, and the fiano’s been there for 12 months, and it is quadruple the thickness of trunk, it is just way more happy to be on that site.

“You can just look at the two vines and you know which one is more suited for the Adelaide Hills. It’s blindingly obvious.”

If, despite their best efforts, the wine made from abandoned grapes isn’t up to standard, there is a backup plan.

“We have this cool thing called a distillery that we then value-add to,” Brendan says.

“What we do is we give [the grower] the same price that they would get for their highest contract for their grapes being offered by any large company, so in this year it was $1,200 a tonne.

“We just say ‘Sorry, we weren’t good enough winemakers to be able to make great wine out of really shoddy grapes, what I’m going to do is just pay you a great price for it anyway.’” 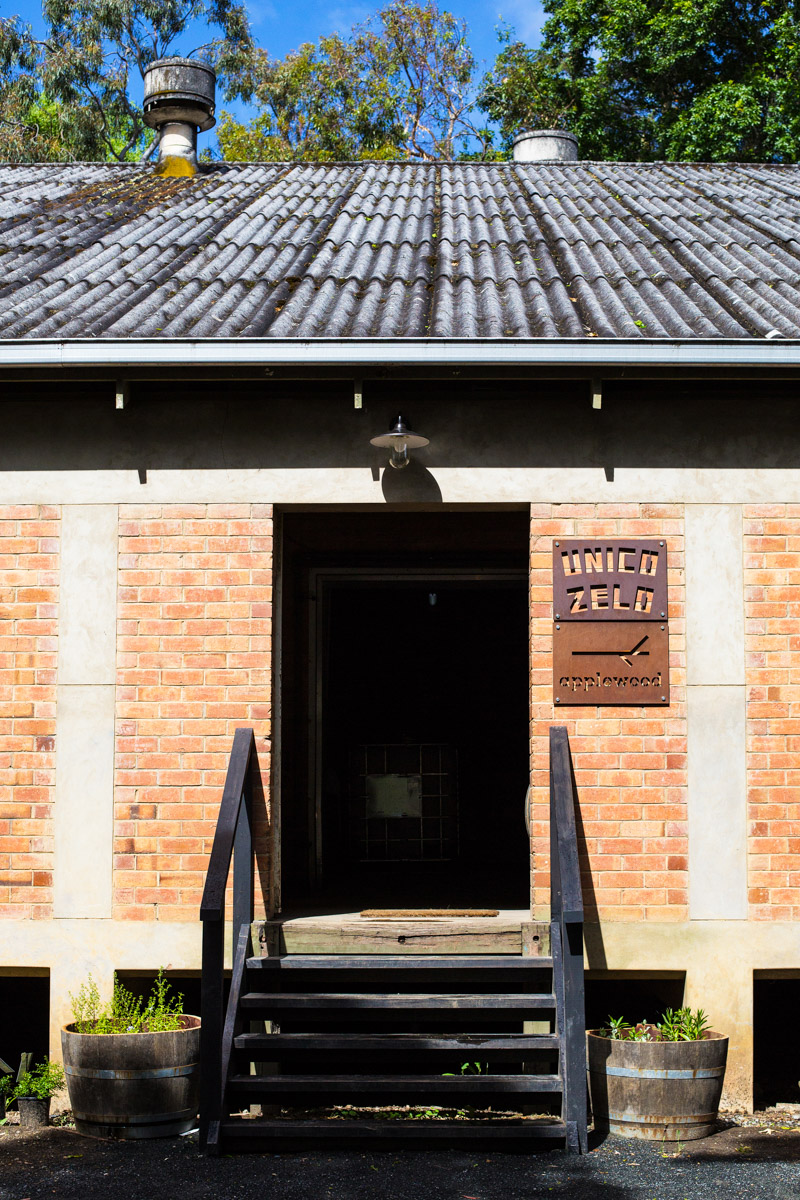 The wine is then distilled into gin and sold through the Applewood Distillery label, which Laura and Brendan also use to push industry toward more appropriate plantations of fruit and botanicals.

“Contrary to the wine industry, where there is no native grape variety that would be applicable for wine use, there are plenty of native Australian fruits, vegetables, barks, trees, grains, that would be just as applicable as what we’re putting in the ground at the moment,” Brendan says.

“I know the more gin I make with natives, the more native produce I need to purchase, which means that I can have some kind of influence on actually getting more put into the ground.

“And funnily enough, when you do put them in the ground, you alleviate a number of the issues already associated with chemical use… and it aligns profitability with sustainability.”

All of Applewood’s products incorporate native flavours, particularly their one-off productions like the WTF Gin, Green Ant Gin, and the work-in-progress Jarrah-aged whisky.

And as the Applewood products continue to garner popularity, the flavours become more sought after.

“So Prohibition, for example, or Barossa Distilling Company, you know, would approach us very much like approaching a graphic designer, with a brief, and it’s our job to try and interpret that brief, utilising botanicals, in the format of gin,” Brendan says.

“Ultimately it would be up to the client how they want their gin to taste, but it’s up to us, as the distiller, to be able to present native produce in a manner that is going to be very approachable and very recognisable in their recipe. To-date, we’ve had 100 per cent hit rate.”

At the heart of Ochre Nation, and each of the branches that sprouts from it, is the belief that profitability and sustainability can be proven to be good bedfellows. And if the transition to native plants and environmentally appropriately grape varietals happens, as Brendan and Laura hopes that it will, a more defined Australian identity will be found.

“Identity is always the key thing for us,” Brendan says.

“I don’t actually believe that 100 per cent of our identity is going to be achieved in natives, I think that’s a very important thing to mention, [but] I think it forms a very big piece of the puzzle that is going to be the realisation of our own identity.

“Identity is in itself a very dynamic process, so we’ll never bang onto it, but I hope that through the work that we’re doing, we will be able to highlight a big portion that we’ve been missing for quite some time.”