Carne asada and snapper ceviche on the public BBQ

Daniella Guevara Munoz has brought the flavours of her native Mexico to Port Adelaide with her restaurant La Popular Taqueria, and now she creates a little taste of them on a Parklands public BBQ. 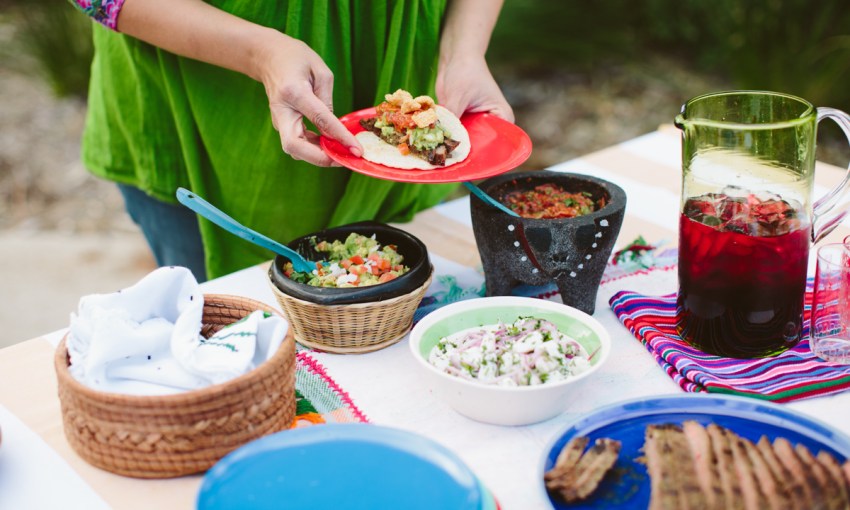 Daniella Guevara Munoz met her partner Kor-jent van Dijk while working in Puerto Morelos, Mexico. Daniella was a marine biologist, and Kor was working on a PhD in biology.

“Where we used to live was on the beach so having a ceviche – it’s a staple,” says Daniella.

Ceviche – seafood cured in an acid, typically from a citrus – does not give itself naturally to preparation on a public BBQ, being that it doesn’t require cooking at all. But it is an excellent appetiser that can be quickly prepared while waiting for other grill-friendly goods like corn tortillas and carne asada to cook.

Daniella is intimately familiar with the best ways to prepare Mexican dishes – not only because she grew up in the country, but because she eschewed her life as a marine biologist to begin cooking full time.

Since immigrating to Australia she has opened La Popular Taqueria in Port Adelaide – one of our state’s few authentic Mexican eateries.

“The tortilla, the stuffing, and the salsa are the holy trinity.” 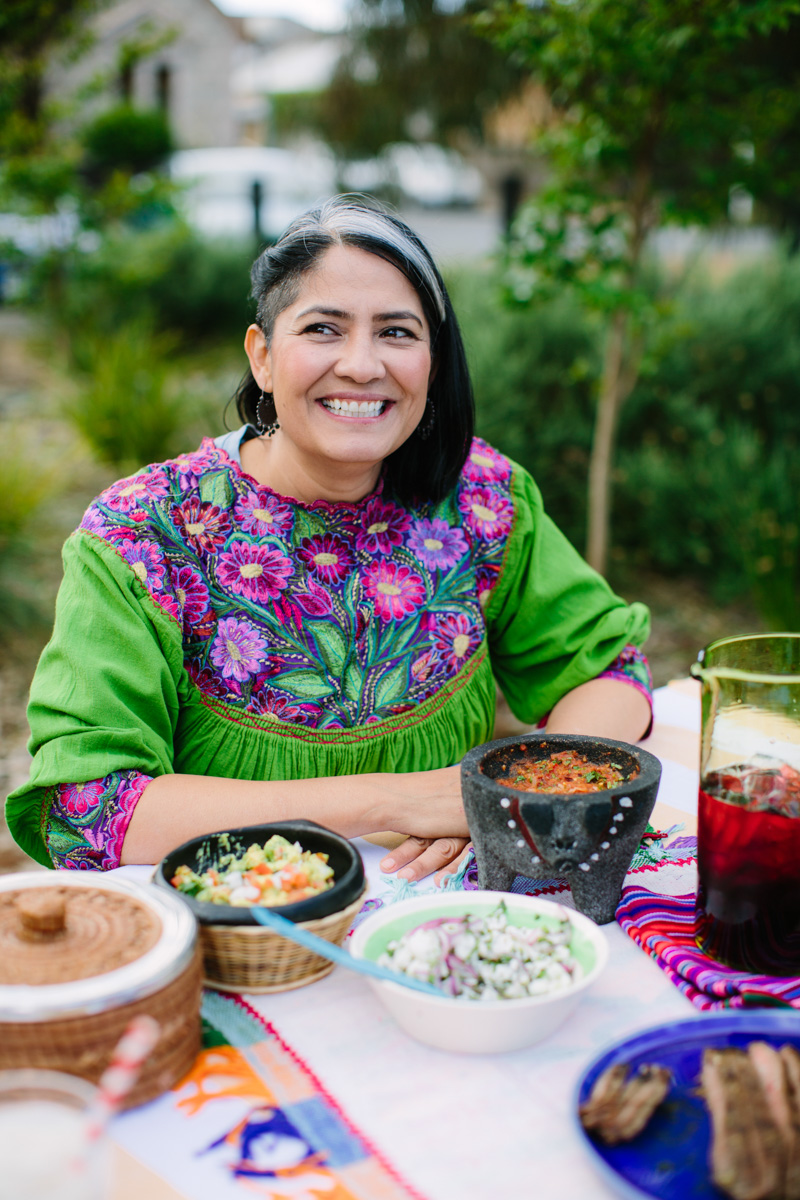 As she grills a marinated flank steak on the BBQ for the carne asada, Daniella explains that while the meat might look like a main player in her recipe, it’s actually the salsa that makes a good taco.

“The tortilla, the stuffing, and the salsa are the holy trinity,” she says. “Even if the stuffing isn’t that good, if the salsa is very good, that’s enough, and you know your taco will taste really good. Some people go to certain taquerias just because of the salsa.”

With this knowledge, La Popular Taqueria mimics the taquerias of Mexico where salsa is given priority.

“It’s simple and fast. It’s not a place you stay for two hours – unless you really want to – It’s to have a bite and to go to the next bar and if you want to come back you can come back for another taco later,” Daniella says.

“We didn’t want to have a fine dining restaurant. We just wanted to show how the tacos are. It’s the simple things that really hit home.”

Daniella and her staff hand make all of the ingredients each day, and order in products from brands that have trustworthy farming methods.

“We get our tortilla chips from a guy who grows the corn himself,” she says, adding that she would like to grow the corn herself someday too.

The tortillas used for the tacos at La Popular are also vastly different to those found in the ‘Mexican’ section of a local supermarket. They’re made using a fresh dough of ground corn and water, pressed flat in a tortilla press, and grilled on a hotplate (or la plancha, Daniella says).

Daniella didn’t learn any of these skills in a culinary course; they were picked up through her natural curiosity.

“My mum is a good cook but she’s not very good at teaching so I was just looking. Also, in the markets you can see how the food is made there and just do some research. It’s all self taught, and a lot of reading.”

Eating played a big part in the refinement of Daniella’s impressive culinary skills. The opening of the restaurant came on the back of a series of secret dinner parties that the pair hosted over the past four years.

“We started hosting dinners like an event. We did them once a month. The business was secret but it’s called Mi Mero Mole,” Daniella says.

“It was always weird at the beginning because everyone was a bit tense. You’re arriving at someone’s house and you’re with all these people you don’t know and you have to share the same table. But then everyone would relax and feel like they were at home.”

This hospitable feeling carries over into the restaurant, where many of the dishes are based on Daniella and Kor’s favourite meals from the secret dinner years – choices that invite each diner a little more fully into their world. 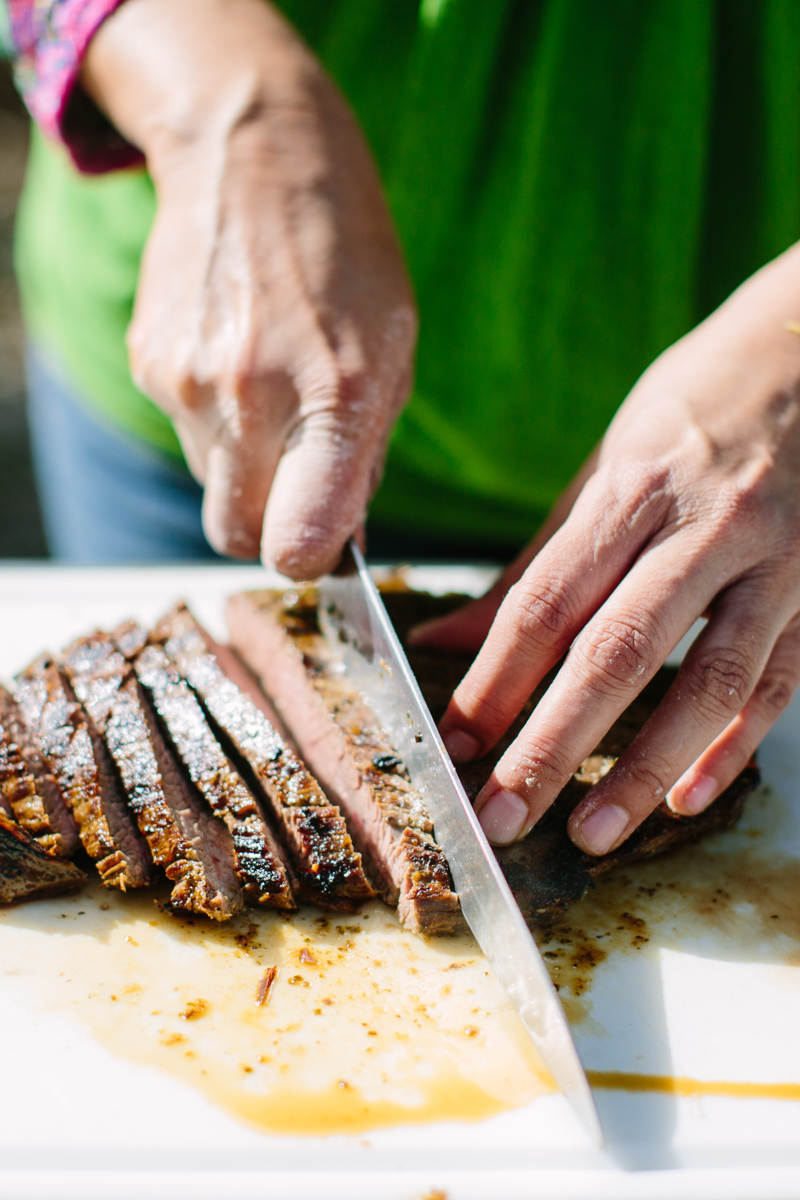 Place the lime juice, garlic, orange juice, coriander, salt and pepper into a food processor and blend very well to create the marinade.

Put the oil and meat in an air-tight container or a plastic sealable bag and add the marinade mix. Make sure all the meat is covered.

Leave it marinating for at least 4 hours or overnight. You can prepare it the day before and have it ready for the BBQ day.

Turn on the grill to max and cook steak six minutes each side (or longer if very thick). After cooking, leave to rest for 10 minutes.

Cut the meat against the grain and serve with hot tortillas. 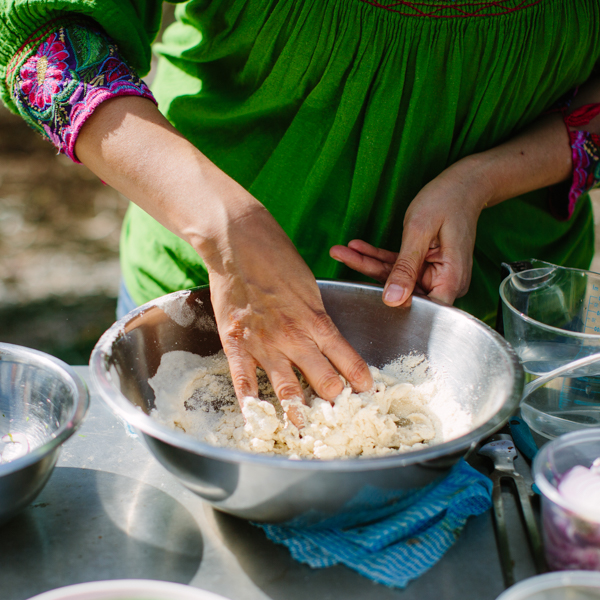 Mix masa and salt with water until the dough is a firm, mashed-potato-like consistency. It should feel moist but not stick to your hands. 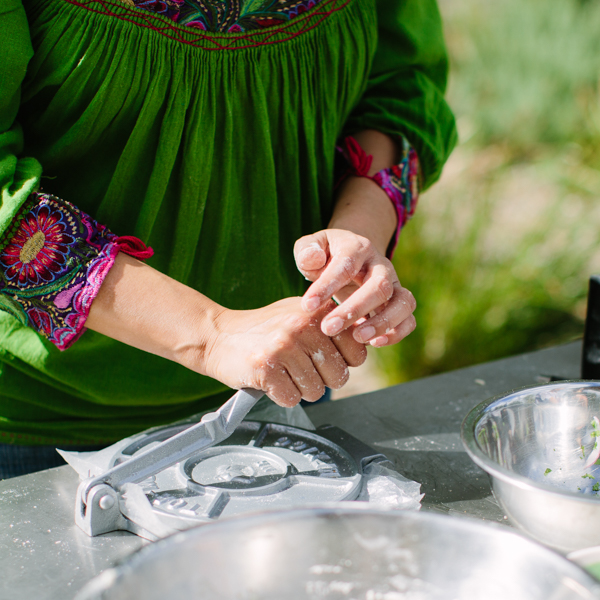 …and place between two sheets of plastic on a tortilla press.

Remove carefully by placing the edge of the dough on to the palm of one hand and peeling away the plastic.

Place on the BBQ by lowering with the back of your hand facing the hotplate and making a gentle sweeping motion:

Grill on both sides until they begin to puff lightly. 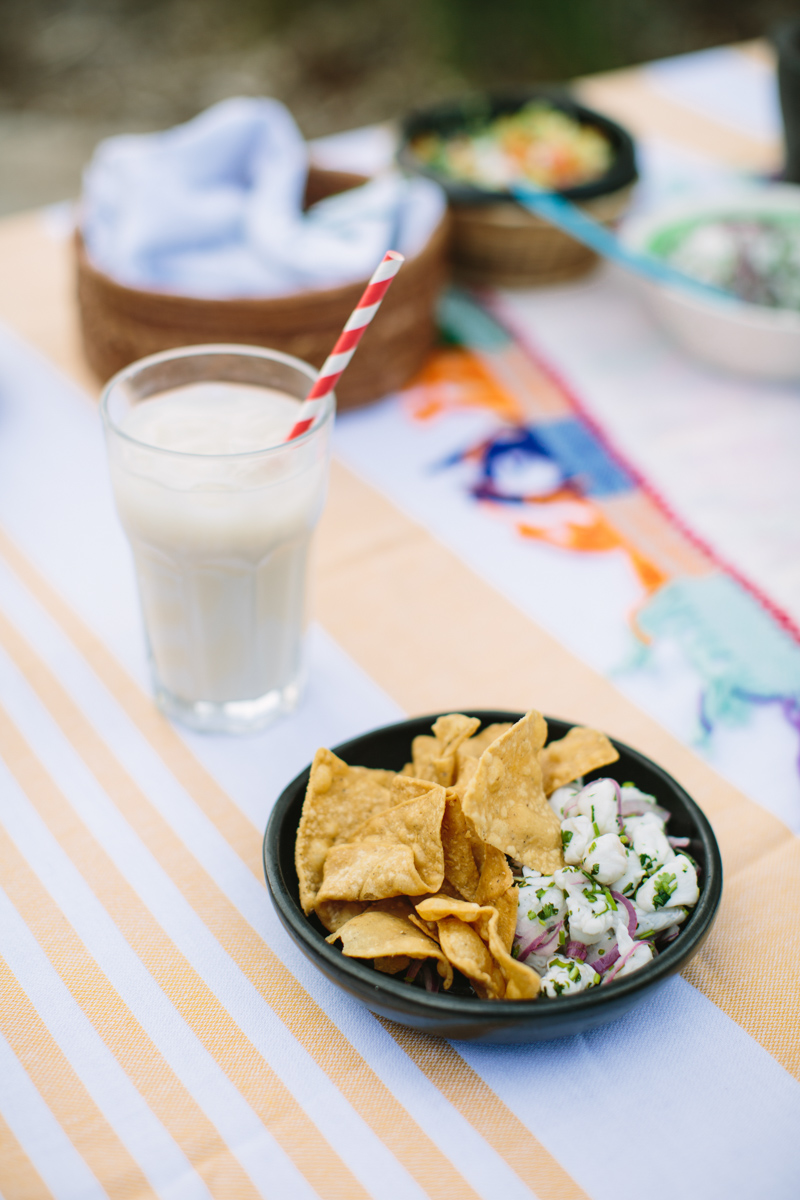 Debone the snapper and cut into 1cm chunks. Put the fish in a glass or ceramic bowl and add half of the lime juice. Leave it to marinate for 10-15 min.

Meanwhile, place the onion and the coriander in a separate glass bowl. The fish is ready when it is nice and firm on the outside and juicy and tender on the inside. Once it reaches that point, strain the lime juice and discard.

Mix ‘cooked’ fish with the onion and coriander, adding the rest of the fresh lime juice, salt to taste, and little bit of pepper.

Serve it with totopos (corn chips) and habanero salsa. 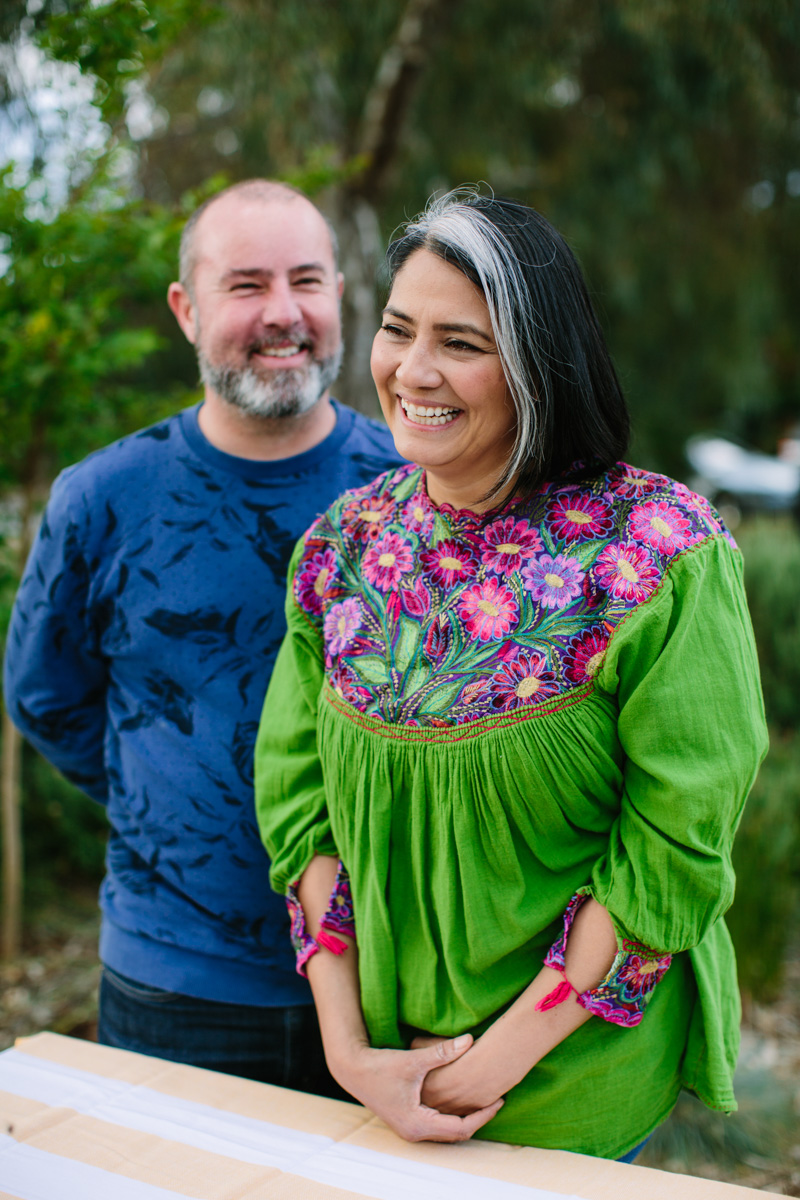