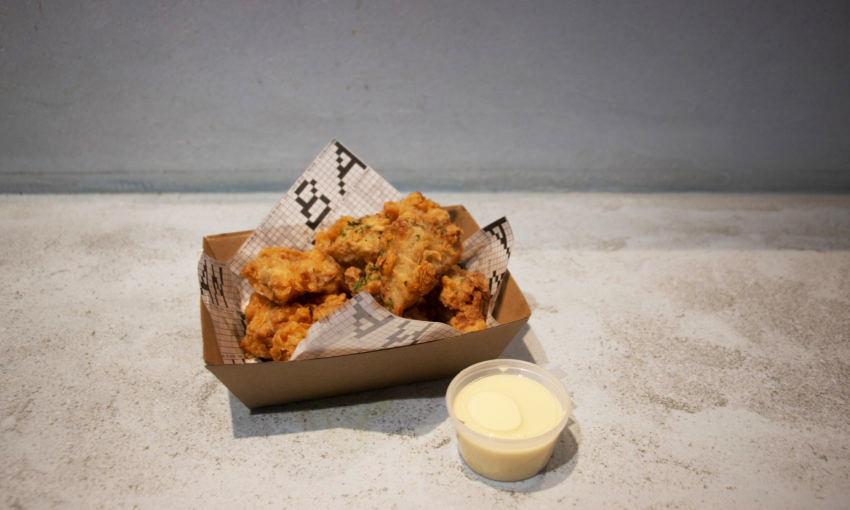 But being vegan means having made a choice to forever opt away from birds cooked in all manner of mouth-watering ways – fried, roasted, sautéed – and in all social situations: be it while resting your vocal cords between karaoke sets at La Sing or at a family barbecue.

As this reporter can attest, when such a succulent smell is in the air and your dietary needs have been forgotten, you get hungry — and resourceful.

You will immediately leave your family barbecue to sniff out a vegan restaurant offering the same experience. And not just any mock meat will do – we want it to be authentic and we want it to taste good.

Not unlike many culinary origin stories, the history of fried chicken is often disputed.

Fried chicken as we currently understand it is thought to have originated in the United States in the early 1800s, drawing influence from Scottish frying techniques and West African seasoning techniques, the latter of whom, of course, existed in America at that time as slaves.

Today, chicken is a menu staple.

Every great chicken recipe exists in its flavourful riffs. It’s not the meat that counts, but what chefs slather on top: smothered in sauce, delicately seasoned, drowned in oil, and cooked to tender perfection.

Of course vegans don’t want to miss out on this.

Because we at CityMag are well-seasoned journalists (pun unapologetically intended) with a commitment to truth and taste, we’ve created an introductory list of the CBD’s best vegan fried chicken. 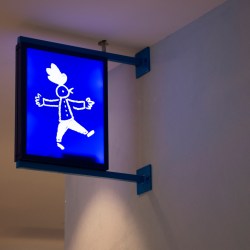 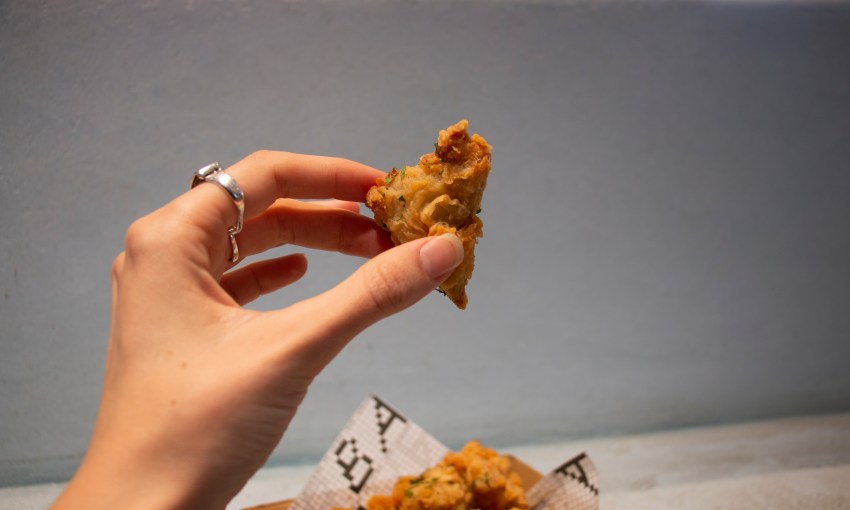 “I know their order off-by-heart because they get the same thing every time,” he says, smiling.

He walks around with the cleanest pair of white Nike trainers and AirPods in his ears, ready to take an order.

Alan tells CityMag to order a half-serve of vegan chicken with the secret mayo sauce.“It’s smaller, more ideal for just you,” he says.

Twelve pieces of fried faux-chicken appear eight minutes later, mostly triangular, though some are square, and all the golden boys are topped with small, shredded parsley. A light batter jackets the exterior.

The beauty of this chicken isn’t in the crust but the meat. Oily, tender, sweet. The mayo (aka “secret sauce”) brings some tartness too.

There’s oil at the bottom of the cardboard container, but that doesn’t deter us. Though it may hinder its ability to be recycled.

Alan wouldn’t tell us the secrets of the sauce, but he says the vegan chicken comes from a supplier in Sydney and is mostly made of wheat. 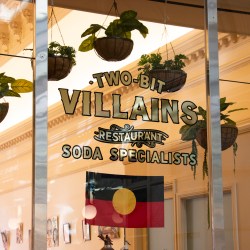 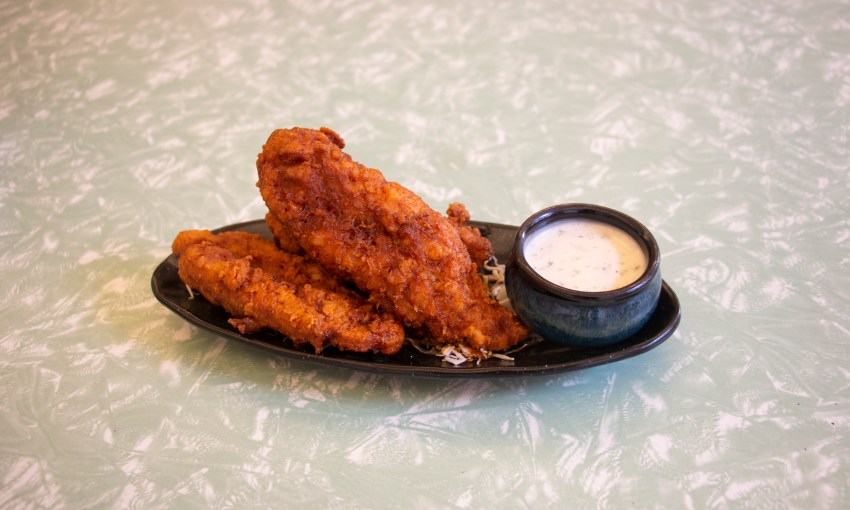 Before we sat down at Two Bit Villians, we were warned there would be a half-hour wait before the food would come out. We ordered the Nashville chicken tenders with a side of creamy ranch dressing. Our server told us the chicken was battered in brown sugar, wrapped in an array of spices.

Forty minutes later, three long tenders to appear, laid on a bed of shredded cabbage and bright red in colour. The pot of ranch dressing stands at the ready, dotted with tantalising bits of floating ‘erbs.

The Two Bit Villains vegan fried chicken is a different beast to Ban Ban’s. There’s an abundance of flavour on its shell, with notes of paprika. The spice is so hectic that you may need a minute to recoup after it first hits the back of your throat. But you will immediately go back for more.

Beneath the bright-red coating, the chicken is not much to look at, but is pillowy, thick and white.

Biodegradable BioPak takeaway boxes are offered as a takeaway vessel, which is always a plus. 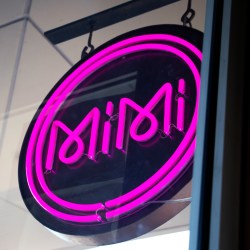 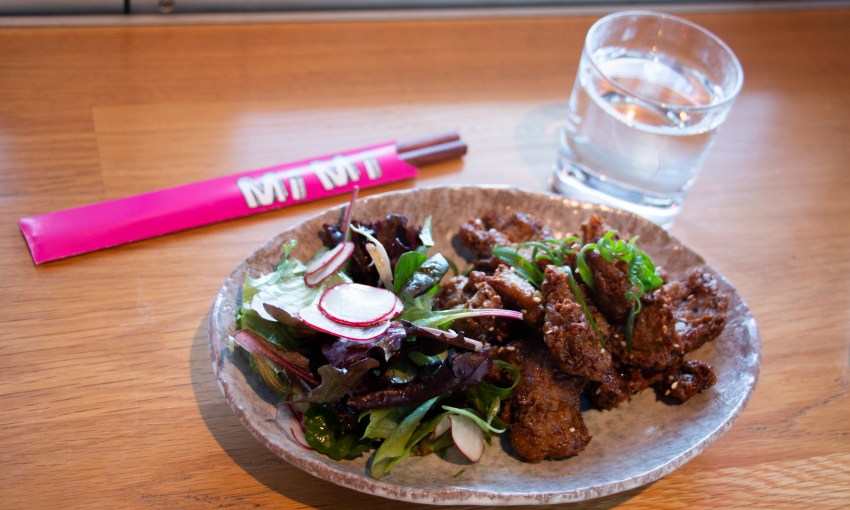 Our +82 MiMi waiter recommends the sweet chilli or the yuzu garlic soy sauce with the fried chick’n. She says garlic soy is the one, especially if you’re good with spice.

In eight minutes, 12 pieces of dark brown vegan protein appears. There’s a side salad (tiny slivers of bitter radish are the star of that show) and offer a much-welcomed palate cleanser when the dish’s richness overwhelms.

This chicken isn’t meant to be slammed, but savoured. There’s a depth of flavour to it. It’s meaty, but the sauce is slightly sweet, and there’s less emphasis on the crunch.

We’re told the vegan chicken is made out of soy protein. “The chef didn’t tell me anything else,” our waiter shrugs.

LORD OF THE FRIES 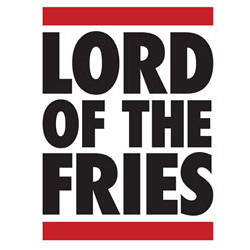 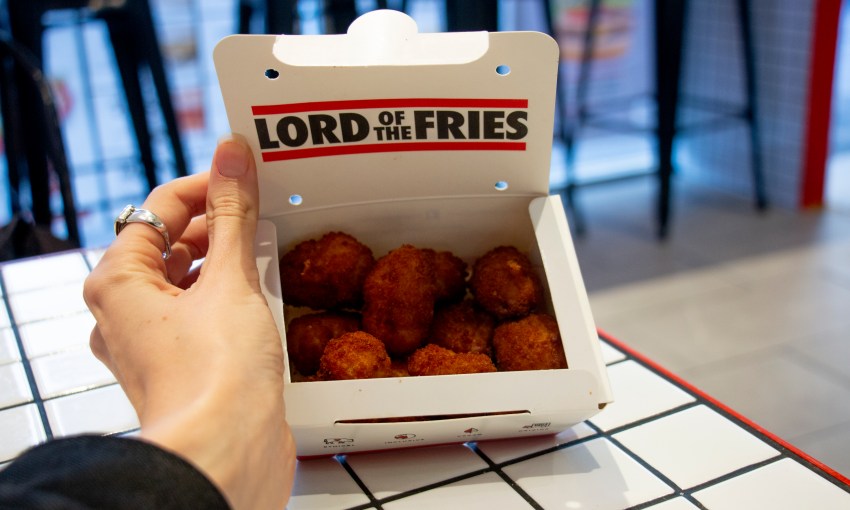 Our sleepy-eyed Lord of the Fries server recommends the Vietnamese sauce with the chicken nuggets.

In three minutes, 12 nuggets appear in a takeaway box. They’re not misshapen like regular nuggets, but perfectly spherical. Like delightful golden orbs. As you bite into these tiny morsels, the battered shell separates from the flesh.

There’s a little salt sprinkled over top, and the cardboard container, and our fingers, survive without becoming stained with oil.

Last year, Lord of the Fries, in a fiery vegan controversy, changed their vegan nugget recipe. Insults flew online, and many customers worried whether the miscellaneous faux-meat would change forever.

Since the alteration, this journalist noticed the nuggets became less sinewy but rounder and bigger. This just means there’s more to love. 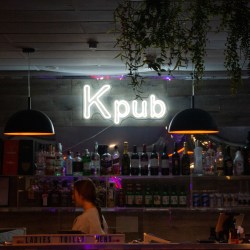 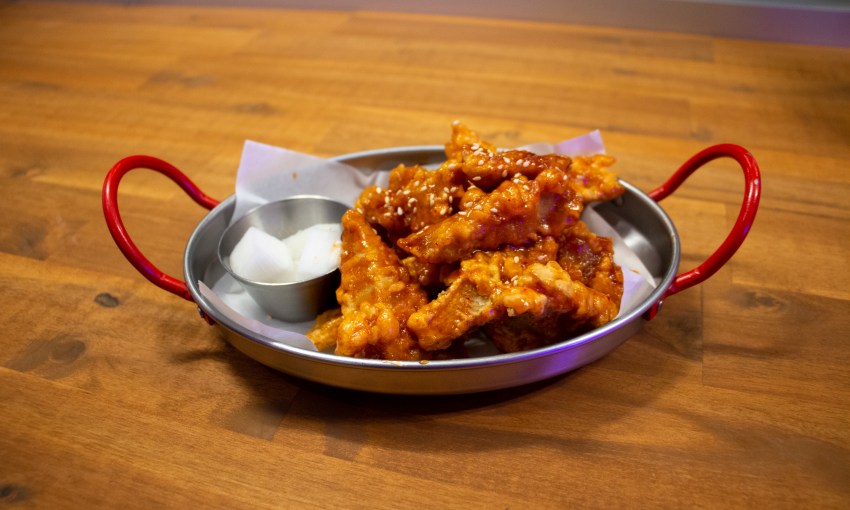 Fourteen thinly sliced chicken bits appeared from the kitchen in eight minutes. The eatery’s speakers blast Korean boy-band BTS to amp us up.

This chicken is chewy and juicy. The strips are a mustard colour, but the best of the bunch had dark brown corners, even looking like real chicken. The batter is minimal, and the sauce is slightly sweet, with hints of Maple syrup throughout.

Chase a piece of this chicken with a cube of pickled radish and you’ve got yourself a good time.